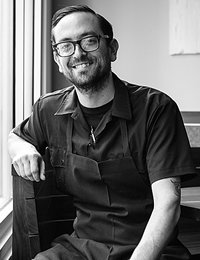 Before he ever worked with Jeremy Sewall at Lark Creek, Paul Kahan at Blackbird, Jason Hammel and Amalea Tschilds at Lula Cafe, Chris Pandel at Bristol, and Jared Van Camp at Old Town Social, Yoni Levy was a dough boy and delivery driver for Little Caesar’s.

After a couple of years working uninspiring front-of-house positions and cook jobs, he finally decided to enroll at The Culinary Institute of America in Hyde Park. While there, he externed at Bradley Ogden’s One Market in San Francisco, CA. Upon graduating in 2001, Levy got a job with Jeremy Sewall, and then followed him to Boston, where he helped open Great Bay. Levy then moved to Chicago with his future wife and worked first at Blackbird and then as sous chef at Lula Café. After cooking with Pandel at Bristol, Levy accepted a position as chef de cuisine at Old Town Social before launching a farm for the Jane Addams Hull-House Museum. When the time came to start a family, he moved back to California’s Bay Area, becoming chef de cuisine at Flora in Oakland. Levy opened Daniel Patterson’s Alta before arriving as executive chef at Outerlands in 2015. For three years, Levy create crave-inducing California cuisine with an international edge at the consistently busy restaurant.

In June 2018, Levy made the tough decision to leave Outerlands citing a desire to spend more time with his young family. He is now chef de cuisine at Salesforce Tower in San Francisco working on the 61st floor, known as the Ohana Floor, which has incredible views of the bay. Salesforce offers event space to non-profits, foundations, and charitable organizations that align with their culture of giving back.

Yoni Levy was selected as one of the 2016 San Francisco Rising Stars by StarChefs.com at their annual Gala in June 2016. The awards celebrate the new wave, the avant-garde, and the best and brightest of young chefs.

Chef Yoni Levy majored in culinary arts at The Culinary Institute of America in Hyde Park, NY. He is the chef-de-cuisine at Salesforce Tower’s Ohana Floor in San Francisco.