Where in the World are CIA Alumni? 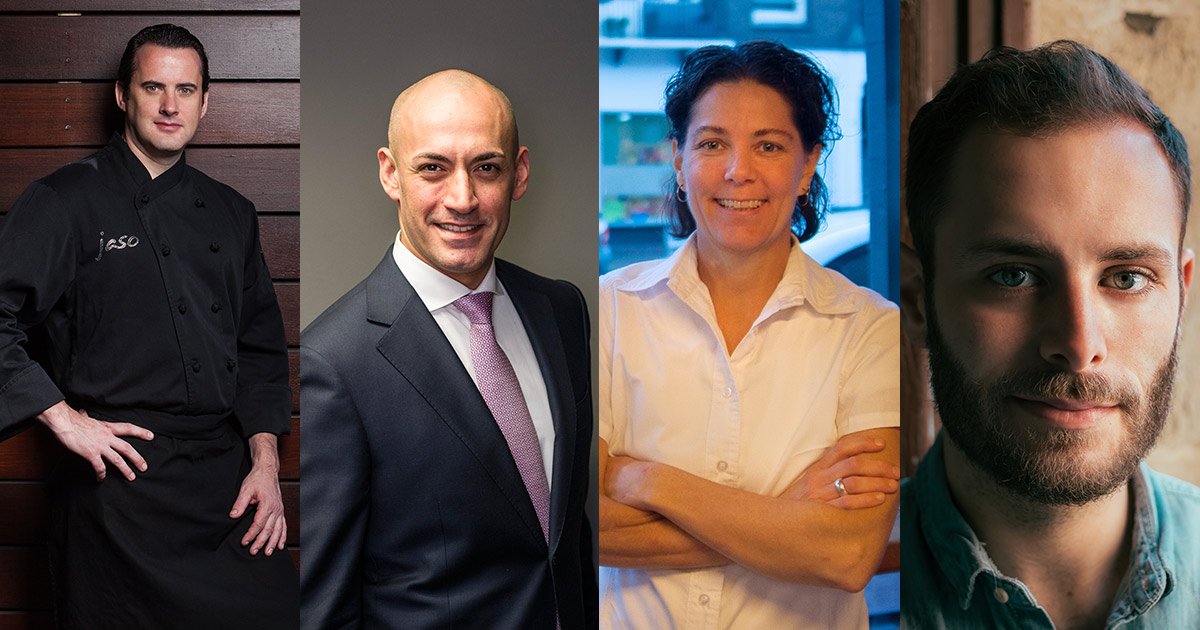 CIA faculty hail from more than 40 countries, and our students come to the college from across the U.S. and the globe. So it’s no wonder that you can find CIA alumni fanned out around the world, using their talents and expertise to influence, and be influenced by, their adopted countries.

Take a moment to see what a few of our alumni—who have found their culinary calling far from home in Singapore, The Netherlands, Mexico, and Spain—are up to. All have taken their CIA experience to a foreign shore and blossomed there. 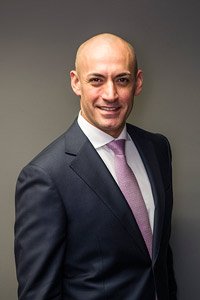 My first job after graduation was at the Four Seasons Hotel New York where I was food and beverage manager. I was exposed to in-room dining, lobby bar, and restaurant operations. After several promotions, I ultimately became general manager of the 57/57 Restaurant there. Two years later, I went on to Las Vegas where I joined the Wolfgang Puck organization. My career with Wolfgang Puck spanned more than 14 years, during which I held general manager positions at outlets in Las Vegas, NV; Maui, HI; Washington, DC; Singapore; and Los Angeles, CA. My career with Wolfgang opened the door to my work as the executive director of food & beverage for the Marina Bay Sands and vice president of operations at Capella Hotel Group, both located in Singapore.

The CIA gave me the foundation and understanding of the business, from the basics to the complex, through both the associate and bachelor’s programs.

The CIA is known in the industry everywhere I go in the world. The CIA’s campus here in Singapore has helped heighten awareness of the college in the entire region. 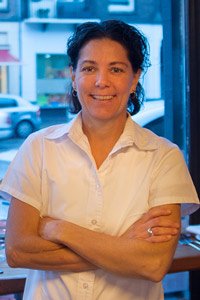 Before heading to the CIA in 1997, I had already completed a bachelor’s degree and worked for several years within the hospitality/culinary industry. After getting my AOS degree from the CIA, I worked as store manager for both Oakville Grocery Company in Healdsburg, CA and New Seasons Market in Portland, OR; chef de partie at The Sea Grill in Brussels, Belgium; assistant manager at Vapriano Restaurant in Amsterdam, The Netherlands; and owner/operator of Real Food Solutions, also in Amsterdam.

What drew you to working in Amsterdam?

I met my partner, Claudia, while traveling abroad almost 10 years ago. Claudia is from Amsterdam. I relocated there, and we were married there in 2007. As an expat, I had to quickly learn a new language. I also had to determine how to flex my skills—leadership, management, and food production within the sustainable and organic food arena in the U.S.—in a new job market. Ultimately, we decided to follow our passion for wholesome ingredients and Rome/Lazio cooking. Restaurant space is hard to come by in Amsterdam. After a lot of planning, construction—much of which we did ourselves—and determination, we opened Cantinetta in November 2012. Three years later, Cantinetta is well-recognized in Amsterdam and beyond for our service, hospitality, food, and wine.

What keeps you in Amsterdam?

Cantinetta Wine & Pasta is thriving and, as we wind our way into year four, we have set new goals to continue to grow and develop the business. Living overseas means dearly missing a lot of family and friends, and being away from the thriving U.S. culinary scene. Both Claudia and I would not be surprised if, eventually, Cantinetta Wine & Pasta opens in the U.S.

The curriculum and instruction at the CIA confirmed for me the need to incorporate the tenets of passion, preparation, precision and accuracy, authenticity, and integrity into everything I do within the professional culinary environment.

In my estimation, the CIA is not well-known in The Netherlands. But the evolving culinary landscape and public interest in places like Amsterdam and Rotterdam makes this a very good time to key Dutch food professionals into the benefits of a comprehensive, detail-oriented, and professional culinary learning program like the CIA. 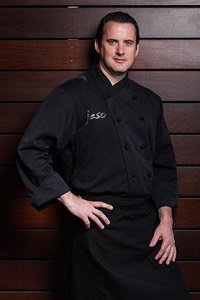 I am the executive chef and owner of Jaso, a 90-seat upscale restaurant in the Polanco section of Mexico City. With my wife Sonia Arias ’97—an accomplished pastry chef—I own three bakeries, a fresh pasta bar, and a high-volume events and catering operation. I am currently tasked with both culinary operations and development. I create new menus and maintain standards based upon market opportunities and trends. I order all food and hire motivated and talented employees, now numbering 58.

What drew you to working in Mexico?

I was drawn to Mexico City because my wife was raised there. Mexico City is a major metropolitan area with 19 million inhabitants who are becoming more and more food savvy. It is also a huge travel destination. When I first moved to Mexico, there were many restaurants but few that were offering the upscale service, food, drink, and experience that Jaso did. Now, the industry has become highly competitive and our local competition continues to push and improve, narrowing the gap between us. We constantly have to manage quality, improve the guest experience, and push the boundaries of our creativity. The world has become a smaller place and our patrons have traveled the world eating amazing meals in Asia or Europe, and are comparing these experiences with our offerings. And because we can now acquire flavors from around the globe, I have come to believe the true ingredients for success are dedication, perseverance, and hard work, even more so than location.

What keeps you in Mexico?

We have built our own small “empire” here in Mexico City. Working and residing in Mexico has allowed my family to be financially comfortable. And I am also able to capitalize on opportunities and seek out new ways to expand the business.

I believe that my CIA education gave me the foundation to create and have a real impact on the industry here in Mexico City.

Is the CIA known in Mexico? If it is, how is it perceived?

Local aspiring culinarians who do their homework know about the CIA! They soon realize that the CIA is the only choice when deciding to train as a professional chef. I have encouraged many younger culinary enthusiasts to apply to the CIA rather than to local Mexican academies. 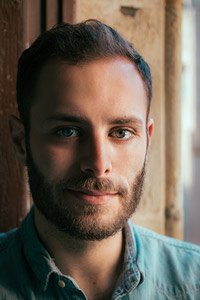 While at the CIA I finished at the top of my class and scored especially high in my Wines course. That success encouraged me to complete the Level 1 Court of Master Sommelier certification just one month after graduating. I made my way to Barcelona on an Oceania Cruises trans-Atlantic voyage teaching cooking classes in their Bon Appétit Culinary Center with Executive Chef and CIA alumna Katherine Kelly ’10. When we arrived in Barcelona, my two-week guest chef position was over and I decided to stay. My first job in Spain was leading wine and food tasting tours for Barcelona Cooking.

I am an account executive at Zoom PR, a social media digital marketing agency. The job takes advantage of my writing and language skills, and since we represent various restaurants in and around Barcelona, my food knowledge has served me well and is a selling point to clients. I’m a freelance writer for Barcelona Metropolitan magazine, Catavino.net, Culinarybackstreets.com, and the travel app Seasonal Cities. I also lead gastro-historical walking tours of medieval Barcelona and regularly attend restaurant/food-themed PR events. I am paid to post about restaurants, brands, and events on my Instagram account.

What drew you to working in Barcelona?

Anyone who has been to Barcelona knows that it is a beautiful, enchanting place. After only three months, I decided to make it my permanent home. There are lots of hurdles to overcome if you are an American working in Barcelona, or Europe in general. But the quality of life here is perfect for me.

What keeps you in Barcelona?

It’s bohemian, old in history and young in energy, and sunny more than 300 days a year. I live just 10 minutes from the beach, ride my bicycle everywhere, feel safe, and have an outlet for my creativity. I eat and drink very well for not a lot of money, and get to speak a foreign language every day. I have friends from all over the world and have already made a bit of a name for myself in a city full of unique individuals. I am as content as can be with my life here.

I have always been a writer. Even while at the CIA, I wrote for a website called myfirstapartment.com. On the recommendation of a friend of a friend from the CIA, I was asked to work part-time as an editorial assistant at Barcelona Metropolitan magazine. My food knowledge and my experience as a student tour guide at the CIA make me a natural fit for my current career.

Yes, it is, though most people here think I was part of the other CIA! For people within the professional culinary world, The Culinary Institute of America is a name they have heard. Visitors from the U.S. with whom I interact are always impressed when I tell them I’m a CIA graduate.

« Students “Science It Up” at the CIA with Final Projects » Leading Media Organizations: Tim Ryan Among the Most Powerful People in Food