Women in Foodservice – Through the Lens of Food 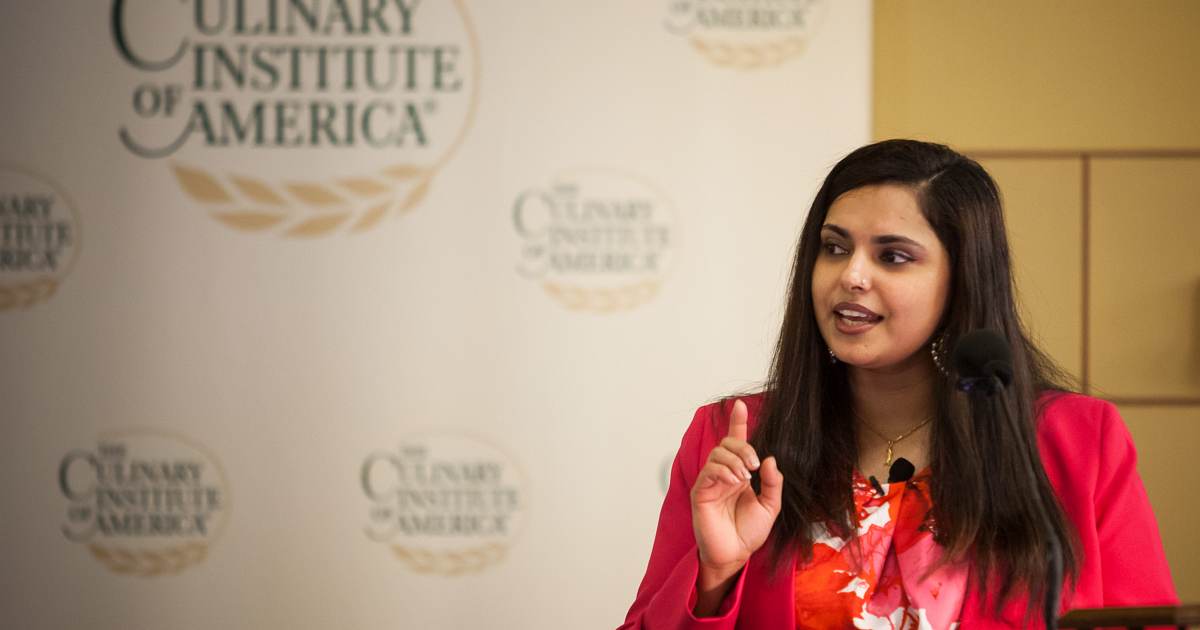 To hear her mother tell it, Maneet Chauhan ’00 was born with a ladle in her hand and a passion for food. The family lived in Ranchi, a small steel company town where workers and their families came from all over India, bringing with them their own regional cuisines. Maneet would go from house to house, claiming her own mother hadn’t fed her, so she could taste the food these “aunties” were preparing. She peppered each of them with questions about their recipes and came away with a broader understanding of Indian cuisine than she would have had if her family had lived in an isolated village. And while others in her family remember events by who was in attendance, Maneet remembers them by the food. She can recite complete menus served at family weddings from years ago. Clearly, she experiences the world through the lens of food.

Seeking Out the Best

“Do whatever you want to, but be sure that you excel at it,” intoned Maneet’s father when she told him she was going to pursue a career in the food world. She sought out the best hospitality school in India, and chose the three-year program at WelcomGroup Graduate School of Hotel Administration (WGSHA). While there, she worked at Le Méridien in Delhi and enjoyed a terrific experience. In her final year at WAGSHA her chef-instructor told her that if she wanted to go further she had best go to the CIA—“the epitome of culinary schools in the world.”

On a cold January day in 1999, Maneet strode onto campus and saw Roth Hall looming ahead. Her first thought was, “I belong in this place.” Despite experiencing some culture shock—after all it was her first time outside of India and her first snowy winter—Maneet felt herself with kindred spirits. “I was under the same roof with 2,000 other people who shared my passion,” she explains. Maneet became editor of La Papillote, served on the judiciary board, was a tour guide, and became a resident assistant. If there were events on the weekends, she volunteered to work them.

Maneet was at the CIA on a student visa. She thought she had lined up a job with a renowned chef in New York City, but when his team realized that it would have to sponsor her to keep her in the country, that offer disappeared. At the time, her aunt and uncle were opening an Indian restaurant in New Jersey and offered to sponsor her for residency. It was not what she wanted, but as with everything Maneet does, she simply decided to embrace the situation. Over the next four years, she worked both front and back of the house, took the restaurant from 70 to 120 seats, and added banquet service. She got real experience managing.

She learned that the owner of Vermillion, Rohani Dey, was looking for a chef to head her New York City location. Maneet got the job, and spent eight years at Vermillion as executive chef. “My crusade was to bring fresh, aromatic Indian flavors to Americans,” Maneet explains. “In India, we have always cooked in a ‘farm-to-table’ manner. I wanted to execute my food in the same way here.”

The World Catches On

Her time at Vermillion brought her to the attention of the world. She was asked to compete on Iron Chef America against Masaharu Morimoto, and describes the moment as a dream come true. Soon, Maneet was offered the opportunity to compete on The Next Iron Chef, which ultimately led to her recurring role as a judge on Chopped.

In 2013, Maneet authored her first book, Flavors of My World. In it she explores cuisine from 25 different countries and gives each an Indian twist. Around the same time, she and her husband, a businessman in the hospitality industry, decided it was time for her to open her own restaurant. Their partners suggested Nashville as a location. Reluctantly, they visited the city and came away totally enthralled by the personality and dynamics of the dining scene there. And so was born Chauhan Ale & Masala House, a fun and hip place that demystifies Indian flavors. Maneet worked with a local brewery to come up with 15 different spiced beers with combinations like saffron-cardamom. They are hugely popular.

Maneet takes on life with enthusiasm and joy. She sees challenges as opportunities to find solutions, disappointments as a chance to plot a new path, and successes as occasion for celebration with family and friends. She loves to discover cuisines from around the world and then playfully tweak them with Indian flavors. Now a mother of two, Maneet has come to understand that motherhood doesn’t diminish your capacity for work, but rather energizes you. She is motivated by the desire to show her daughter and son that they can reach for the stars and take in the world with a passionate embrace.