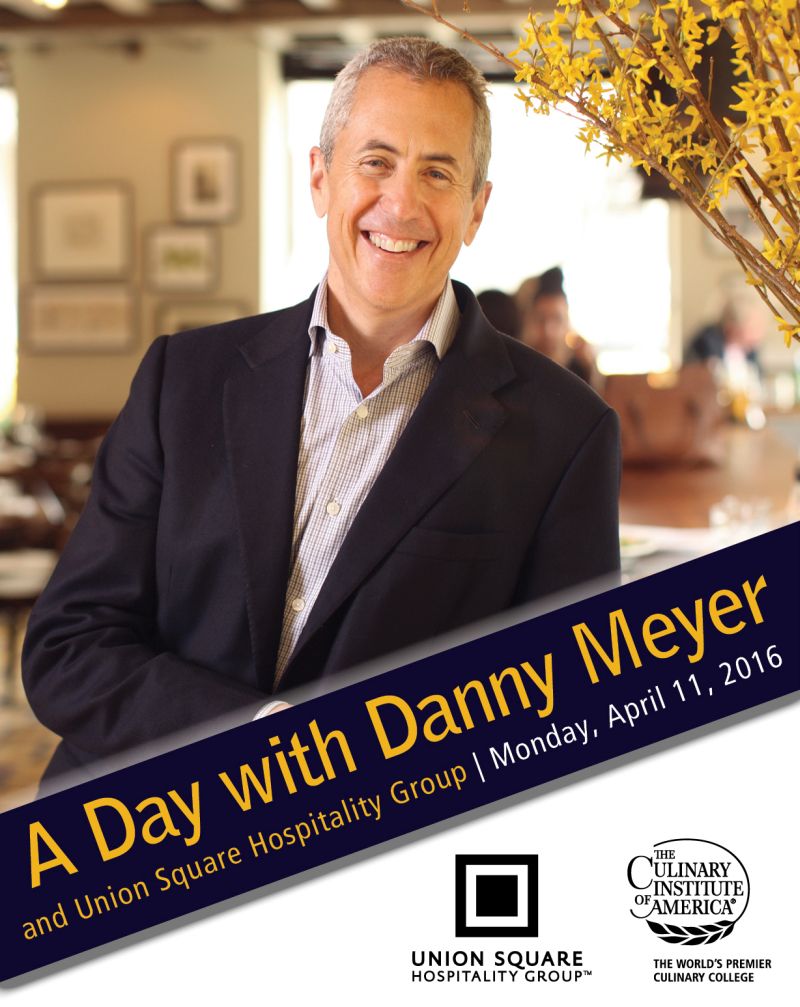 Planning to own your own restaurant? Become a food entrepreneur? Get advice from Danny Meyer, CEO of Union Square Hospitality Group.

Danny Meyer at the CIA

The CIA is excited to welcome Danny Meyer and Union Square Hospitality Group staff members to our New York campus on April 11. The day’s events will include presentations and panel discussions for CIA students, staff, and alumni.

Who is Danny Meyer and Union Square Hospitality Group?

Throughout his 30-year career as a restaurant entrepreneur, Danny Meyer has set his own standards for service and hospitality.  He has championed flawless food with the perfect atmosphere whether you’re celebrating a special occasion or grabbing a burger and fries.  As he told Inc magazine’s Liz Welch in 2015:

“My job is to give and get pleasure from delivering this great food to you. That shouldn’t apply only to the rarefied experience of fine dining and the small population that can afford that.” – Danny Meyer

“Hospitality is a team sport”—it starts with the way you treat your employees and trickles down throughout your organization. In keeping with those principles, his company stepped into the “no tipping” conversation with the introduction of “Hospitality Included” in Fall 2015. The program is rooted in the desire to ensure that everyone on the restaurant staff—including not just servers, but also cooks, reservationists, dishwashers, etc.—receive an equitable share in the satisfaction of patrons.

“I hate those Saturday nights where the whole dining room is high-fiving because they just set a record, and they’re counting their shekels, and the kitchen just says, ‘Well boy, did we sweat tonight.’” – Danny Meyer via Eater

There’s no longer a tip line at select Union Square Hospitality Group restaurants, with the policy rolling out to all locations during 2016. Base menu prices will rise to compensate, allowing restaurant management to direct the proceeds among staff based on merit without overall changing the total cost to diners. More about the policy.

Part 1—The Path to Leadership: From the CIA to Union Square Hospitality Group

Part 4—Building a Career in Beverage: Round Table Discussion