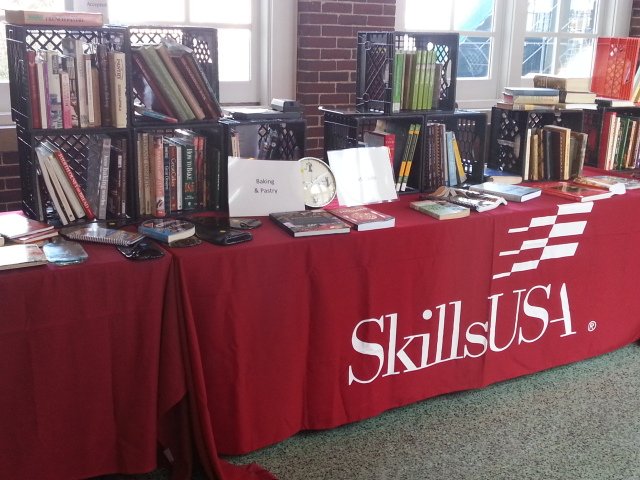 A unique fundraising effort at the CIA is a win-win for students, as well as employees and charitable organizations near the Hyde Park, NY campus. About five years ago, the CIA’s SkillsUSA advisor, Professor Ezra Eichelberger, realized he had many culinary, baking, and wine and beverage reference books that he had not used in several years and thought the students may want some of them to build their personal libraries. Eichelberger asked the SkillsUSA students to organize and promote a used book sale.

A general request was made to all faculty and staff at the college to donate their no-longer-needed cookbooks and other culinary-related books to the cause. The response in donations was bigger than Eichelberger and the students could have expected, as CIA staff appreciated a useful place for their often boxed-up books collecting dust in storage.

With a table and some milk crates set up once a month in a heavily-trafficked corridor in the main building on campus, sales were brisk. Not only were students buying the books to build their collection, but tourists and patrons at the college’s public restaurants were scooping up everything on display.

The effort soon took on a life of its own. Professor Eichelberger began to purchase culinary texts from various Hudson Valley thrift shops that in turn supported organizations such as Goodwill, The Salvation Army, ASPCA, local churches, and international causes like funding for Tibet. These shops proved a treasure trove for old, and sometimes rare, tomes that could have great value in the right hands. The CIA SkillsUSA chapter was then able to re-sell finds like Larousse Gastronomique, a Time-Life Williams-Sonoma series, and books by luminaries of the food world including Julia Child, Alain Ducasse, and Craig Claiborne. Students also frequently donated their own textbooks. Unfortunately, at times these were in mint condition—obviously only slightly used!

One book at a time, more than $7,000 has been raised since 2013 to support CIA students who participate in SkillsUSA at the postsecondary level. The funds are used to buy the food for CIA students to use to practice their techniques and for travel to competitions where, in the last 12 years, they have won more than a dozen New York State gold medals and seven at the national championships.

The initiative has benefited many people and groups: CIA students get to develop their collection, often for as little as $1 a book; area charities raise funds for their causes; and members of the CIA community can recycle their books—all while helping students develop their skills and participate in SkillsUSA cooking, baking, and restaurant service competitions.