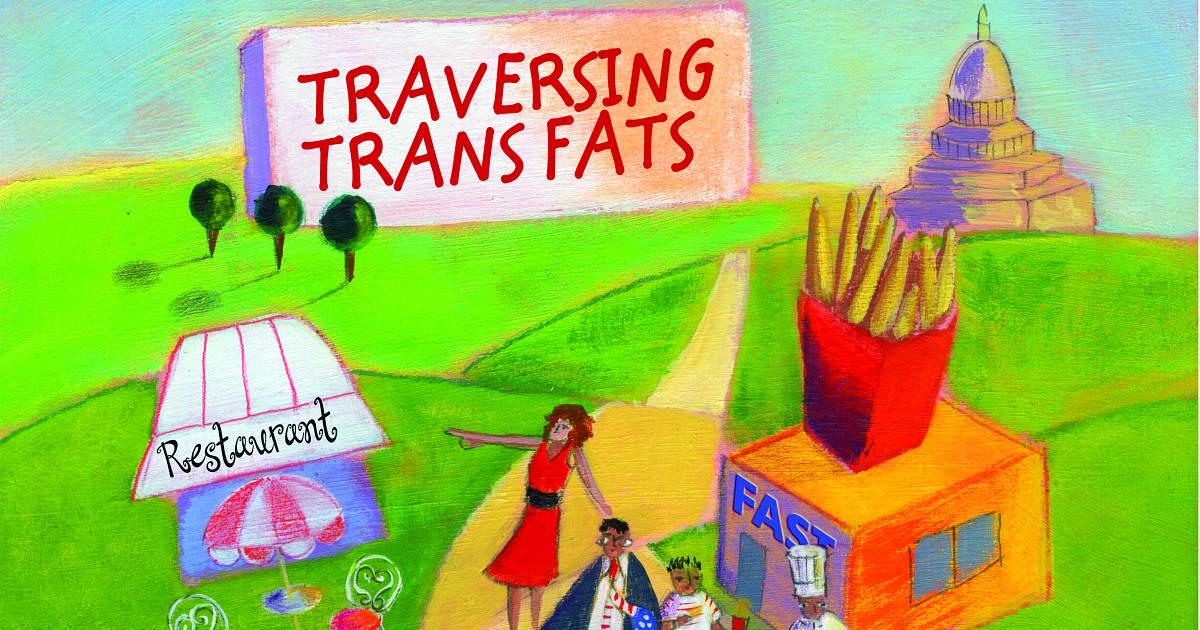 This article was originally created in 2006:

Different challenges face different segments of the foodservice industry… PAINTING A VARIED PICTURE. IT APPEARED AS IF THE STARTING WHISTLE BLEW IN EARLY DECEMBER 2006 WHEN THE NEW YORK CITY BOARD OF HEALTH PUBLICLY ANNOUNCED ITS BAN ON THE USE OF TRANS FATS IN THE ALMOST 24,000 RESTAURANTS IN THE CITY. Suddenly consumers around the country were made aware of this seemingly new health concern.

But it wasn’t new to the foodservice industry. Long before the Food and Drug Administration required that trans fats be listed on food nutrition labels starting in January 2006, segments of the food world had been fast at work looking for alternatives to a fat many have called “metabolic poison.” That certain fats are unhealthy is hardly a surprise to most people. In the 1980s animal fats were liberally used in food until the government alerted the public to the link between these saturated fats and increased “bad” cholesterol. By the ’90s most restaurants had replaced them with partially hydrogenated oils, the source of synthetic trans fats, which at the time were not widely considered harmful. Unfortunately, it takes time and study to reveal the impact of a specific ingredient on health. And, as it turns out, trans fats are a much more lethal fat than was first considered. Like saturated fats, they increase “bad” cholesterol but, in addition, they reduce levels of “good” cholesterol, making them even more unhealthy to ingest. A compelling report from the Harvard School of Public Health revealed that a reduction of trans fat intake to less than 1/2 gram per serving could reduce heart attack-related deaths from between 6 and 19 percent annually—that’s 72,000 deaths a year. This rather remarkable statistic has motivated the foodservice industry, government, and the public to look for alternatives. But like everything else, it’s not simple. A great deal of the controversy and concern in the industry revolves not around whether removing trans fats from the diet is a good idea but rather the effective implementation of that decision has on all segments of the foodservice industry. Giants in the industry, small operators, growers, manufacturers, advisory and regulatory arms of the government, and consumers are each faced with different challenges as they move toward eliminating trans fats from their operations and diets. Looking at this issue from all these points of view draws a varied picture.

The Quick-Serve Giants Blessed with large research and development departments already charged with the task of innovating menu alternatives and following trends in the industry, the Quick Serve Restaurants (QSRs) seem to have begun a successful transition away from trans fats. Companies like Burger King, McDonald’s, KFC, and Taco Bell have all eliminated trans fats. Last August, Wendy’s instituted the use of a proprietary blend of corn and soy oil in their restaurants. Marriott, the largest hotel chain with over 2,300 properties, no longer uses trans fats in its kitchens. Even the J. M. Smucker Company has reformulated its entire line of Crisco® shortenings to contain zero grams of trans fat and 50% less saturated fat than butter per serving. While seemingly ahead of the game and moving in the right direction, these large-scale operations, for whom fried food can represent a significant percentage of their menu items, have still another hurdle to overcome. Many manufacturers pre-blanch food, especially French fries, in trans fats before sending them on to be prepared for patrons. So, it’s not as clear-cut as just changing the type of oil used in the fryer. Manufacturers have to get on board the trans fat-free train to make this all work.

The Small Operator It’s great news that the “big boys” are moving ahead and eliminating trans fats. But what of the small restaurateurs in New York City who don’t have large research and development engines pulling their operations? For them, the recent trans fat ban raises many complex issues. These 24,000 restaurants, which employ more than 180,000 workers from dishwashers to chefs, have until July 2007 to eliminate oils, margarine, and shortening from recipes that contain more than half a gram of trans fat per serving. They have until July 2008 to do the same for bread, cakes, chips, and salad dressings. It’s no small feat meeting the demands of running day-to-day operations while also having to assess new types of oil, evaluate cost implications, seek out new vendors, adapt recipes, focus on customer satisfaction, and educate employees. And, while the New York City Board of Health sent out flyers and offered some training sessions, most independent operators received little help in anticipating or actuating the transition from trans fats. According to the National Restaurant Association (NRA), which fully supports the elimination of trans fats from the diet, the time frame established by the New York City Board of Health is completely unrealistic. “Many of these restaurants work on a 3 percent profit margin; they need time to sort out all the facets of making this change,” explains E. Charles Hunt, executive vice president of the New York City chapters of the New York State Restaurant Association. “And it’s not just the issue of educating operators and helping them find alternative oils at a reasonable price. It’s a farm-to-table issue as well.”

From Farm to Table “If we don’t want the foodservice industry to simply return to using unhealthy saturated fats as a quick-fix substitute to trans fats, we have to be sure we produce enough alternatives—and that takes time,” says Robert Reeves, president of the Institute for Shortening and Edible Oils in Washington, DC. According to Reeves, it takes approximately eight years to bring a new oil from farm to table. Take the newest strain of soybean called low-linolenic. These soybeans with less linolenic acid in them reduce or virtually eliminate the need for partial hydrogenation. It is more stable than traditional soybean oils and contains no trans or saturated fats. This year farmers raised nearly one million acres of low-linolenic soybean and, with aggressive planting this year and next, it is believed five million acres will be available in 2008. But David Stark, vice president of consumer traits at Monsanto Co., predicts “eventually farmers will have to harvest 18 million acres of low-linolenic to replace the current nine billion pounds of soybean oil containing unhealthy trans fats currently consumed annually.” Monsanto and Pioneer® Hi-Bred International Inc., two leaders in soybean production, aren’t sure that target can be met. And the question remains whether it will be financially profitable for growers to replace acreage currently planted with regular soybean with the low-linolenic type, especially if it means missing out on the lucrative biodiesel or livestock food market that currently relies upon their regular soybeans. Under the banner of “good news”—a recent public announcement from the Golden Peanut Company confirmed that it is due, in early 2007, to start supplying customers with refined, bleached, and deodorized peanut oil which can be used in fried products and baked goods as a flavor carrier. It is expected to double the production capacity of refined peanut oil in the U.S. However, the question of supply and demand remains. As the foodservice industry moves as one to eliminate trans fats, growers and suppliers of healthier fats will be under a strain to have enough on hand to meet the demand.

The Consumer Then there is the consumer. A scan of Internet message boards and blogs reveals that many wish the government would “stay out of the kitchen” and allow for free choice. They are tired of the FDA and other groups constantly changing the rules. A good example is the issue of carbohydrates. First, the suggestion was to eat a high-carb, low-protein diet. That changed to eating a no-carb diet, and now the general consensus is that it’s the type of carb you eat that matters, not the total elimination of carbs. Consumers rightly feel buffeted by the ever-changing recommendations. But there are many who do look for guidance as they attempt to understand what is healthy vs. what is unhealthy. A report issued by Mintel’s Global New Product Database revealed that, in 2006, food products with the largest segment growth were those touting a reduced content of fat, calories, sugar, and cholesterol. And while it’s true that most consumers will yawn when hearing a lecture on the complexities of good fats vs. bad fats, they do seem to listen when the government simplifies things and says “eat low fat, less sugar, fewer calories.” This trend in the way consumers are purchasing their packaged foods is translating itself into their expectations when they go to a restaurant. According to a study by Technomic, Inc., 63 percent of restaurant goers nationally support New York City’s ban. And with 50 percent of consumers’ food dollars going to restaurant dining, operators have to respond with menu alternatives that provide diners with a variety of healthy choices that are rich in flavor and appeal, and still afford a bit of the romance central to the dining experience. But, like anything else, when it comes to healthy eating, education is key.

Teaching Tomorrow’s Industry Leaders Discussion of nutrition and health has always been a part of the curriculum in the CIA’s degree programs. The goal is to make sense of the ever-evolving science along the way. “We strive to teach about, and work with, the best science available at the time,” says MARK ERICKSON ’77, the CIA’s vice president for continuing education. Two years ago, the college removed all trans fats from its restaurants and kitchens in anticipation of the growing concern about hydrogenated oils. According to Associate Dean for Curriculum and Instruction for Culinary Arts GREG FATIGATI ’77, “We are talking to our students in our classrooms and kitchens about this issue in relation to health and flavor all of the time.” In other, more far-reaching ways, the CIA has focused its culinary expertise to leverage several initiatives with Harvard University Medical School and School of Public Health that are looking at health issues as they relate to the foodservice industry, the healthcare professional, and the individual operator. (See page 10.) While there may be general agreement that trans fats have to be eliminated, how each segment of the foodservice industry—and the American consumer—meets the challenges inherent in that goal that will determine whether it’s a smooth or bumpy ride.