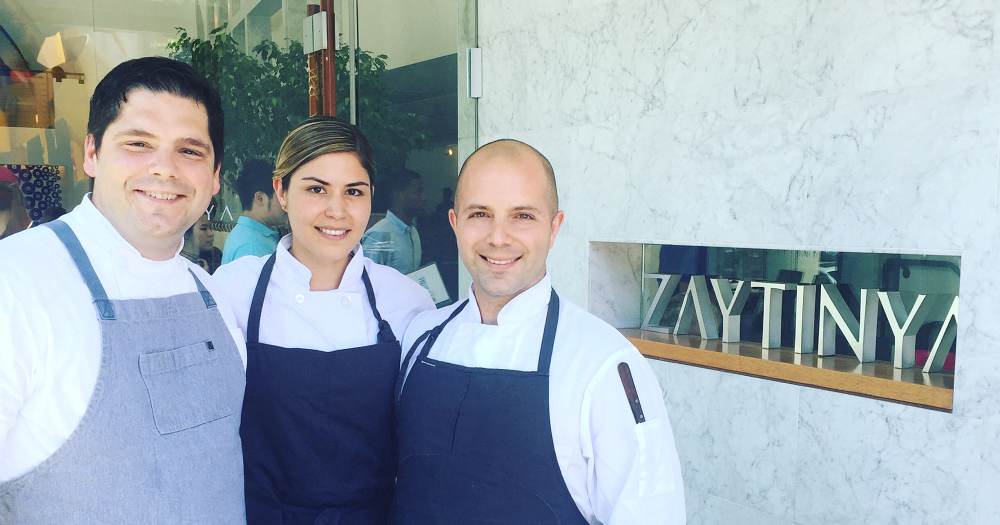 Zaytinya is Chef José Andrés’ 15-year-old brainchild, now a mainstay of DC. For many years, Zaytinya has provided DC with an elegant, lofty yet warm atmosphere and flavors from the Eastern Mediterranean.

Sayat has eaten at Zaytinya many times before. He met Chef Michael Costa during Chef Costa’s visit to the James Beard House in New York and was spending time in the kitchen at Le Bernardin where Sayat was working. They soon discovered that they had a mutual friend, Aglaia Kremezi, a journalist, a cook book author, and Zaytinya’s “Greek godmother.” She has been consulting with the restaurant since the beginning. Because of this connection, staging at Zaytinya was akin to going home for Sayat.

Chef Michael Costa has been with Chef Jose Andres’s Think Food Group for six years, successfully running the mainly Greek-Turkish-Lebanese restaurant Zaytinya. Chef Costa has traveled to the Eastern Mediterranean many times. He continues to enrich his team and the restaurant’s cuisine with guest chefs, field trips, new techniques applied to Middle Eastern ingredients, and by researching and “unearthing” old recipes.

What’s fascinating to us is that Zaytinya pulls from most of the cultures, lands, and peoples that were once, often begrudgingly, tied to Istanbul, Sayat’s hometown. When Sultans conquered a new land, they would not only bring unique ingredients from the conquered lands but also cooks and craftsmen to the palace to showcase their skills. Istanbul became a cosmopolitan city with food from the Balkans, North Africa, the Caucasus and the Middle East. Lebanese, Armenian, Circassian, Greek, Turkish, Moroccan, Libyan, Palestinian, Iranian and Jewish dishes coexist on the menu organized in small plates.

We arrived early in the morning to learn how to make phyllo dough with sous chefs Hilda and Daniel. Chef Costa is very proud of Zaytinya being the only restaurant in the DC Metro area that rolls its own phyllo. This is not easy to verify, but Sayat cannot even cite a restaurant in Istanbul that makes its phyllo. It’s definitely rare. The spanakopita and the lamb bouregs that are made with the phyllo dough are cooked in butter in the brick oven that is at the heart of the restaurant. They are some of the most popular, most traditional, and most delicious items on the menu.

When Laura visited Turkey two years ago one of the things she got obsessed about was baklavas, their shapes, textures and flavors. Baklavas are not just crispy and chewy but also hold gradients of texture made possible by the layering of phyllo dough and slowing cooking and toasting techniques. After meeting Sayat and exploring the uses of phyllo at home her curiosity grew even more.

The two-hour process of making the sheets starts with mixing the flour, eggs, simple syrup, salt, milk, and water. Then the sticky dough is rolled and portioned. Boxes upon boxes of cornstarch are used to keep them from sticking to each other. Chef Hilda rolled the dough while she was explaining the different techniques used across Middle Eastern countries. Her recipe for phyllo dough has been used for the last 14 years at the restaurant.

Once we cleaned the flour off of our aprons, Chef Hilda let us loose in the kitchen encouraging us to work with whomever we wanted to or whoever needed help. Sayat was so excited, incredibly impressed by everything in the kitchen. Yogurt is probably Sayat’s favorite ingredient and food item to consume. To come across his favorite breakfast item on the brunch menu was a delight. Cilbir is mainly a dish of poached eggs and yogurt. At Zaytinya, it is served with pita croutons, oregano, and Aleppo chili oil. Besides the yogurt and egg dish, there are smoked yogurt, mushroom labnah (strained yogurt or yogurt cheese), sesame leaf yogurt, garlic yogurt, tzatsiki or cacik (a yogurt salad), and plain labnah—which is on the mise en place to be used for various dishes across all the stations. 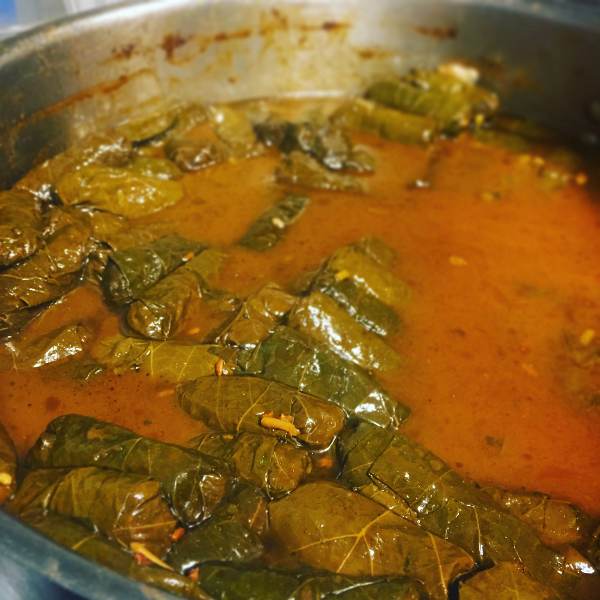 Tart and Rich, they confit in their own juices. Zaytinya also cures their own grape leaves in season!

When Sayat’s mother cooks a meal for a holiday, her recipe book might as well be Zeytinya’s. From circassian chicken to the dolmas, from babaganoush to koftedes, from Iranian saffron pilaf to the horta. Being at Zaytinya, was like going home. Spending time with Turkish cooks, meeting the CIA graduates, and learning from cooks who came from different parts of Latin America, analyzing the process and the outcome of a dish, and exchanging thoughts on how to improve and take it to the next level was very rewarding for both of us. 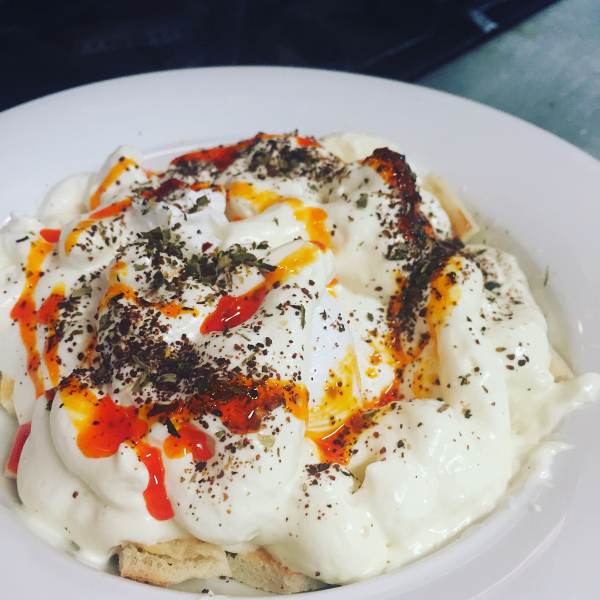 Thanks to the team that Chef Costa has built with his operations team we felt as though we were part of the restaurant. We cannot wait to go back!