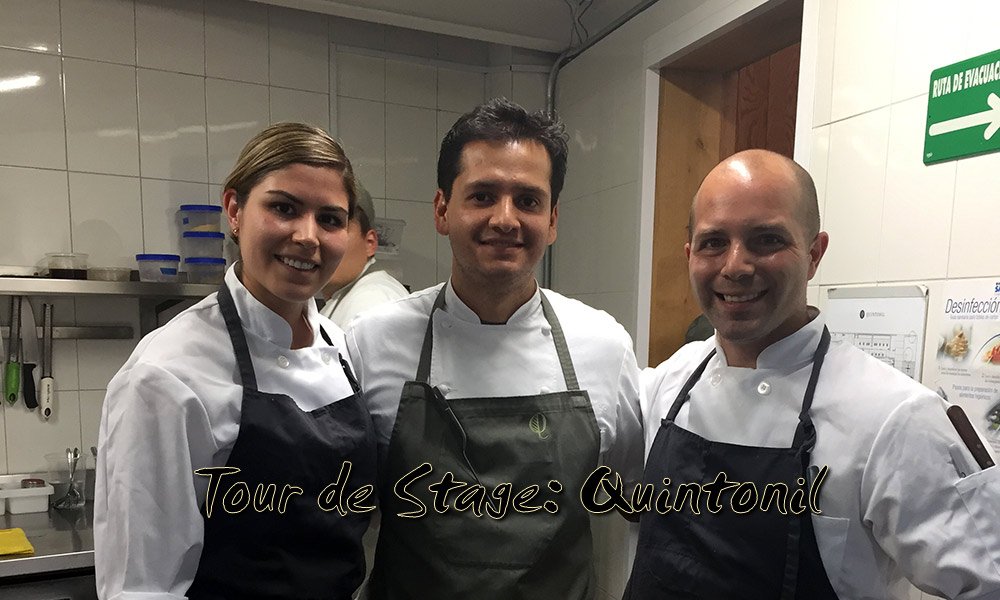 Despite the fact that Chef Jorge Vallejo and his wife Alejandra Flores had just returned from a trip to the World’s 50 Best Restaurants awards party in New York City—where Quintonil had jumped from #35 to #12 in the world—the kitchen was calm, focused, and unpretentious. We hadn’t known what to expect from such a renowned restaurant but the calm energy was certainly grounding.

Chef Jorge is considered part of Chef Enrique Olvera’s legacy, as the former spent many years at Pujol before opening Quintonil with his wife. Quintonil is only four years old but the concept, perspective, philosophy, and cuisine are as mature as any you will find in restaurants with decades of history. We love Quintonil’s own description of its character.

“Quintonil strives to use ingredients derived from the nation’s small-scale producers and create dishes that take everyday, home-style flavors to an even higher level, all in a warm, unhurried, and welcoming atmosphere. It reminds us that simplicity and hospitality do not have to be at odds with haute cuisine.”

A written philosophy is of course not enough to create one of the best restaurants in the world. At this level of hospitality attention to detail is expected and implied but we observed that it was the overarching paradigm during kitchen operations.

Every time Roberto plated the squash chilachayote dish he made sure the wedges were each evenly covered with the mole. When Nancy seasoned the escamole she tasted her mix every single time. During prep, Geraldine not only showed us what thickness she wanted the chiffonade of cilantro but she also followed up on her demonstration and made sure we were doing it right. Chef Jorge did not only wipe plates and read orders on the pass but very often walked over to the stations to check the temperature of the plates, the seasoning, the doneness of the protein, and the wellbeing of the cooks. What was so exciting to us about this attention to detail was that we all spoke the same language and cared about the same things. Being in Quintonil did not feel any different from our experience in restaurants of a similar pedigree. 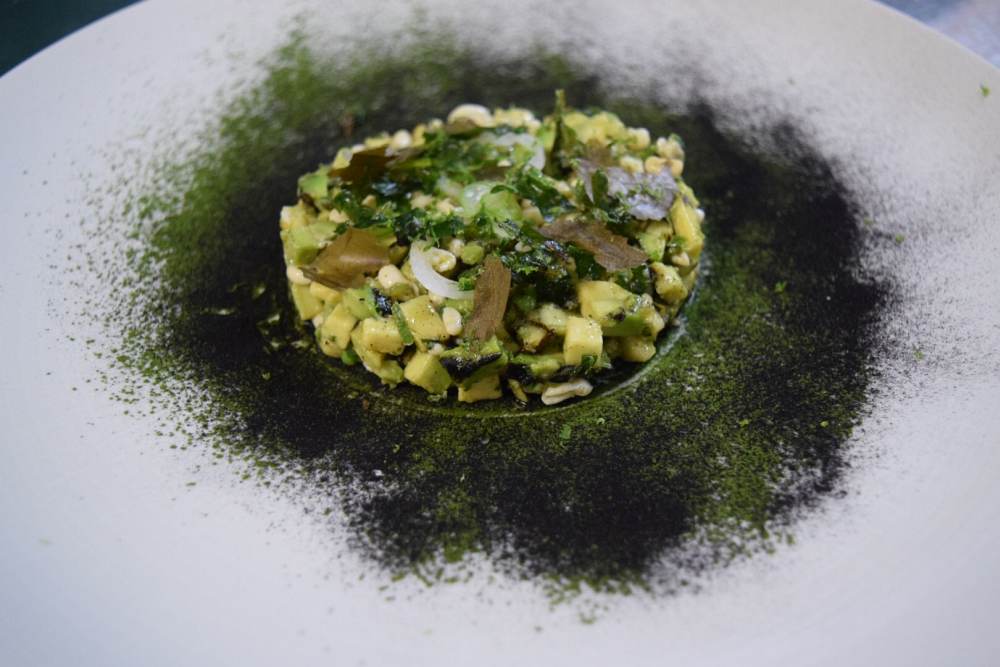 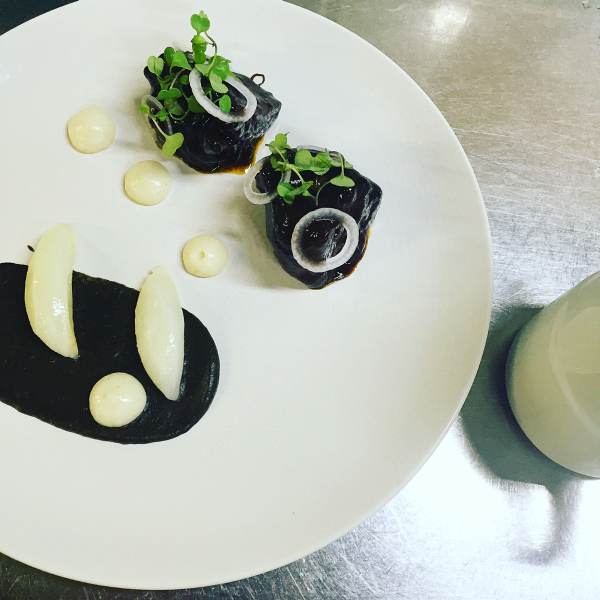 Brisket glazed with pulque, white chayote, and charred corn purée. Pulque—fermented agave— is a “drunk sauce” that includes ginger, onions, garlic, tomatoes, and piloncillo, and has a sweet, tart, and slightly funky flavor

The thoughtful composition of the ingredients on the plate reflects the same attention to detail that was seen during each stage of preparation by the cooks. The huazontle dish is homey, delicious, well constructed, and anchored in tradition. It marries tomato sauce, huazontles, quinoa, cheese from Chiapas, and fried meringue of huazontles. A relative of the Andean quinoa, huazontle is a Mexican native cash crop of southern Mexico. Some call it “fresh amaranth.” The plant resembles broccoli florets and tastes like it too. Traditionally the plant is deep fried in an egg batter with cheese, similar to the meringues on the dish. It’s served with a tomato sauce as street food. The tomato sauce, called codzito is finished with fresh cheese. At Quintonil, the dish is finished with queso cuadro—sheep’s milk cheese that is very “barnyardy” and rich—reminiscent of a good feta. The dish comes together like a story in a book. 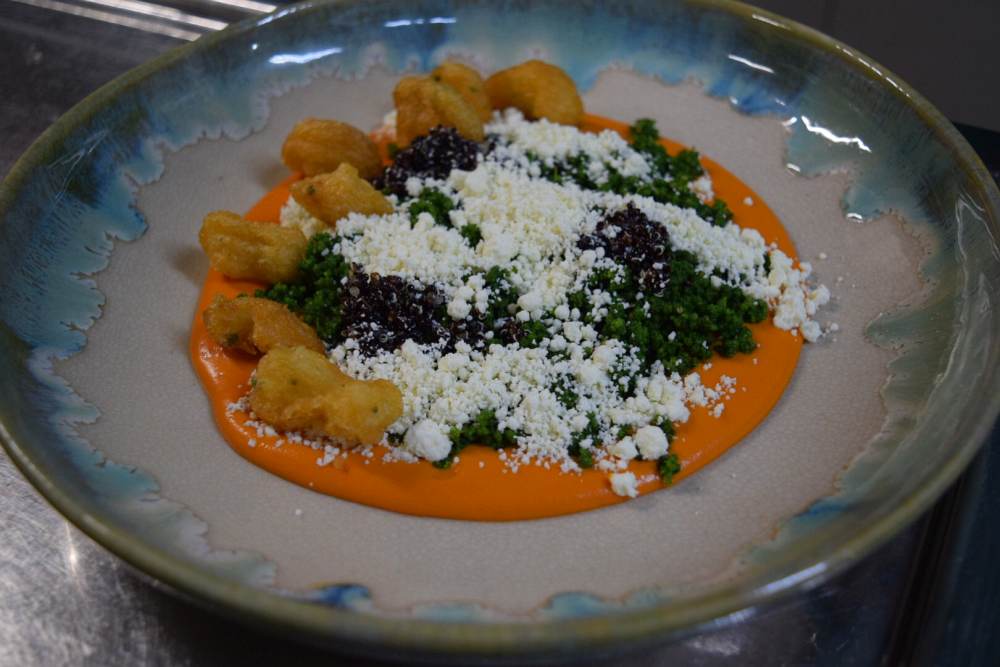 Quintonil stands out as a humble family business run by a husband and wife, who’s calm, charm, thoughtfulness, and hard work permeates throughout the kitchen and dining room. In just four short years, the team has developed systems that bring excellence to every dish. They include: a local sourcing network, a rooftop herb garden, excellent family meals, effective pre-service briefings, and ongoing conversations about regional cuisines and a vegetable-forward, sustainable menu. We leave Quintonil and Mexico City inspired and energized for our stages in the United States. 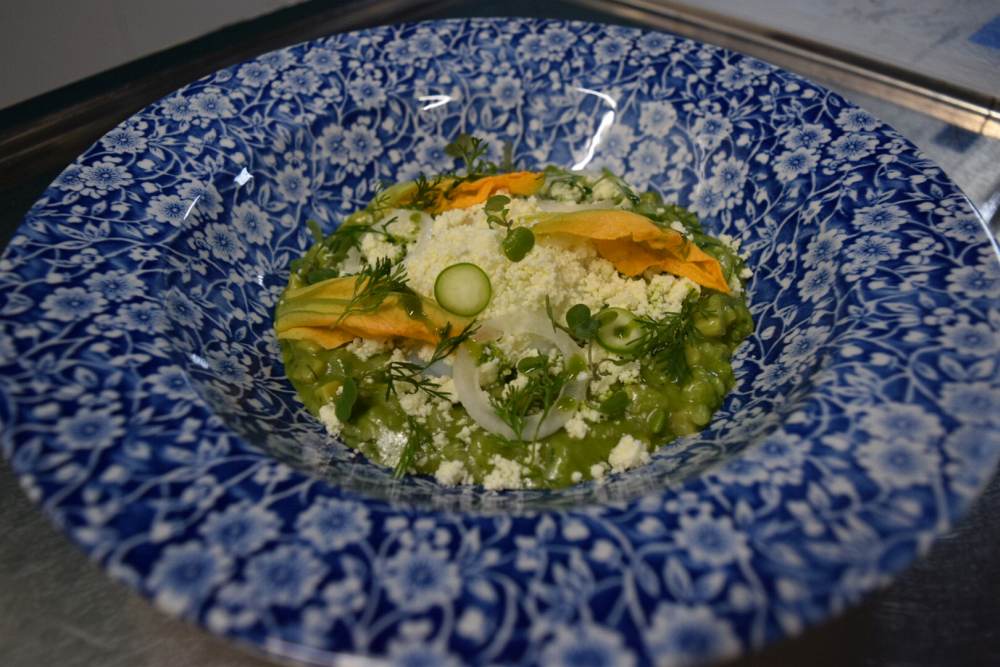 Rice is cooked in juice of poblanos along with spinach, butter, and queso ocosingo—an artisanal, double cream cow’s milk cheese aged in a round casing of non-fat cheese. It is sometimes called queso bola because of its shape