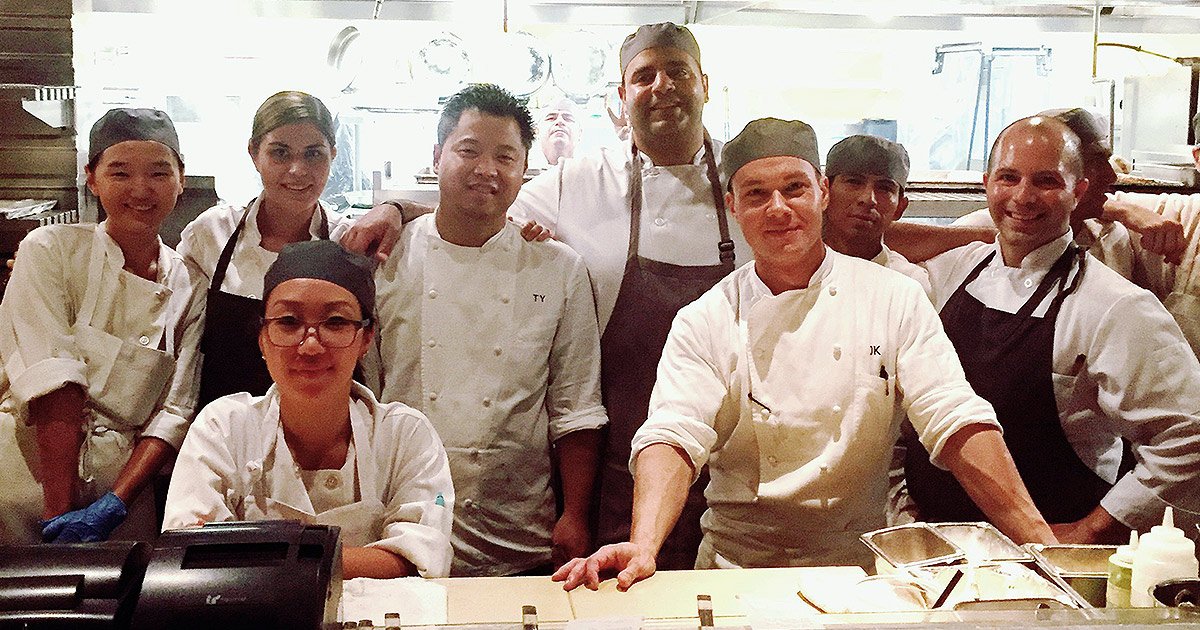 Los Angeles is one of the most cosmopolitan cities in the United States. It’s the home of some of the best Korean, Middle Eastern, Thai, and Mexican food in the country. With Pacific influences it’s also one of the early adopters and innovators of the American sushi craze.

Southern California in general were also the starting ground for some of the most prominent American fast food chains large and small, including Taco Bell, In-N-Out, Cheesecake Factory, California Pizza Kitchen, McDonald’s and Panda Express.

It’s the part of the country where trends are set.

Wolfgang Puck is a chef whose name has become synonymous with the city. His first restaurant venture, Spago, is an iconic destination in Beverly Hills, where he popularized fusion cuisine.

Spago in Beverly Hills is one of the most iconic restaurants in Los Angeles. Chef Wolfgang Puck opened it near Hollywood to much fanfare more than 30 years ago. In 2008 and 2009 the restaurant received two Michelin stars. Some guests have been to the restaurant countless times, enjoying the breadth of experiences at the restaurant multiple times every week. Regulars include many Hollywood stars and celebrities.

Chef Wolfgang is not only one of the first chefs to put pizza on a fine-dining menu, he is a leader of the food scene in Los Angeles, a forerunner of ‘fusion’ cuisine,’ and a chef who is driven by hospitality. He emerged right around the time when food was becoming something to celebrate and he became one of the first celebrity chefs in the country.

Prior to our arrival on the day of our stage, Chef Wolfgang was in the restaurant checking with the cooks, visiting at the tables, and gathering mise en place for the party he was having at home for his friends. It is fascinating that this restaurant has the feel of a family business—not something you would expect from a restaurant mogul who owns one of the biggest hospitality empires in the country. The empire ranges from airport restaurants to a catering company that has worked the Oscars multiple times, and from the Michelin-starred flagship to restaurants at Disney and MGM-grand.

The sous-chefs described Chef Wolfgang as someone who is very engaged in the operation and who enjoys challenging his team on a daily basis.

The most apt word to describe the operation at Spago is impressive. The range of food that the restaurant offers to its guests is one of the biggest reasons guests frequent the restaurant multiple times a week. You can eat pizza, lobster bisque, Peking duck, sushi, gnocchi and grilled rack of lamb with falafels on different days of the week and still be left with a variety of experiences for next week. Most of the butchering is done in-house and the pasta is made daily. The bread program is impeccable. Spago tells the story of its neighborhood and its guest, of Los Angeles and its multicultural mosaic, of perfect execution and service. Iconic dishes that have influenced many a menu across the country continue attracting tourists and locals alike: Smoked salmon pizza, veal schnitzel, Kaiserschmarrn, Peking duck with bao buns and pickled vegetables, millefeuille, and soufflé. 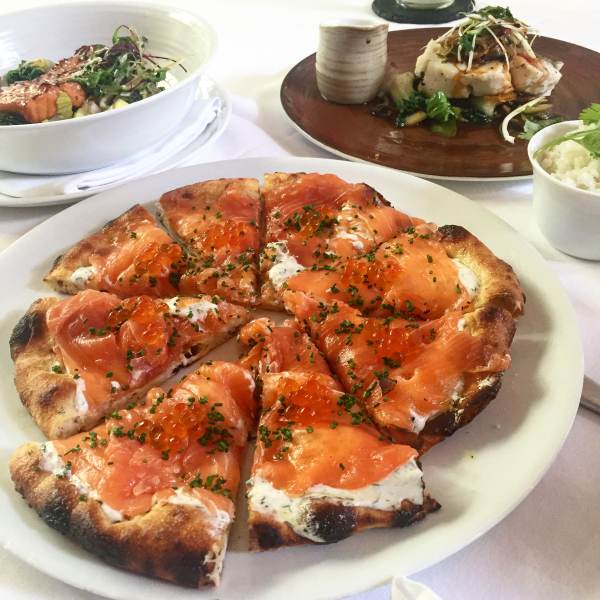 Our visit to the kitchen coincided with the Dine Los Angeles weeks. So on that day, the restaurant was producing two tasting menus, a à la carte menu, and a ‘Dine Los Angeles’ menu. Amuse bouche, table side shows, a course served in the kitchen, a beautiful courtyard, and a lofty dining room all add even more variety to the experiences to be had at the restaurant.

Such diversity for the guests not only makes the overall operation challenging but also makes the stations a challenge for the cooks. This, however, is a blessing in disguise as it attracts professionals who are eager to learn and are willing to challenge themselves within a complex operation. Within this array, two cooks found their niche and have been with Spago kitchen for more than two decades. Cheche runs the fish station with steamed, sautéed and roasted items. Esequiel works the morning shift and makes the pasta and gnocchi.

The gnocchi Esequiel is making is technically a gnudi, “naked ravioli,” because it doesn’t have potato. We discuss the tradition with him and go into the Italian regions where it’s traditionally served with white veal stews. On the Spago menu, it appears as a gnocchi and it’s served with an excellent veal ragout. Esequiel is an expert in the art of flour and eggs. The pasta changes on the menu often and he produces the product perfectly to specifications regardless of whether it’s called a gnudi or gnocchi. He has trained many pasta makers across the Wolfgang Puck organization over the years.

The family meal calendar dictates the menu during the half-hour mandatory break. It’s roasted pork today—with a bright sauce created by sous chef Areg. The cooks are called to go on break, we follow suit. Some days the sous chefs cook fajitas or breakfast for dinner, some days chicken chausseur or Bolognese. Everyone goes outside to get some fresh air before the first push. 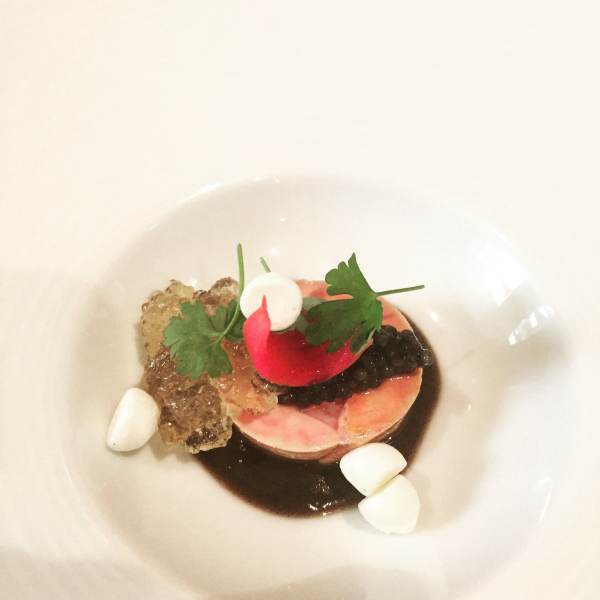 One dish that captures the ‘fusion’ is the Santa Barbara spot prawn dish. It’s composed of a soup dumpling with a black squid ink shell filled with lobster, pork and chicken stock. Another component is a steamed loup-de-mer served skin on, a European ingredient, a predominantly Asian technique. The local spot prawns are seared on the plancha and peeled to order. The heads are made into a flavorful, simple broth prior to service, and poured over the dish with a little bit of chili oil. 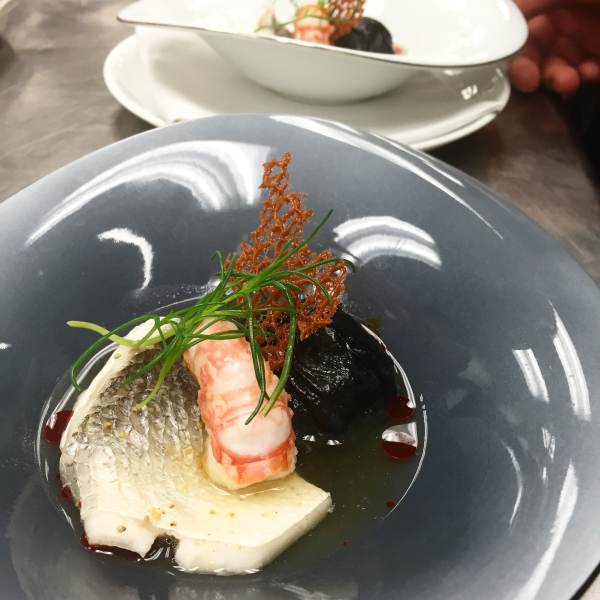 With 280 reservations, Chef Tetsu expected to serve at least 70 tasting menus that evening. The cooks adjust mise en place throughout the natural breaks in service. We find a minute during one of the breaks and share a laugh with everyone as we embrace them, take our photos and say goodbye.

Thank you to Chef Tetsu for opening your kitchen to us and to Chef Justin Katsuno for arranging our day at Spago!

« Aqua-what-a? Cool Things to Do with Bean Liquid Aquafaba » Baking Without Guilt – 4 Easy Ways to Have Your Cake and Eat It Too