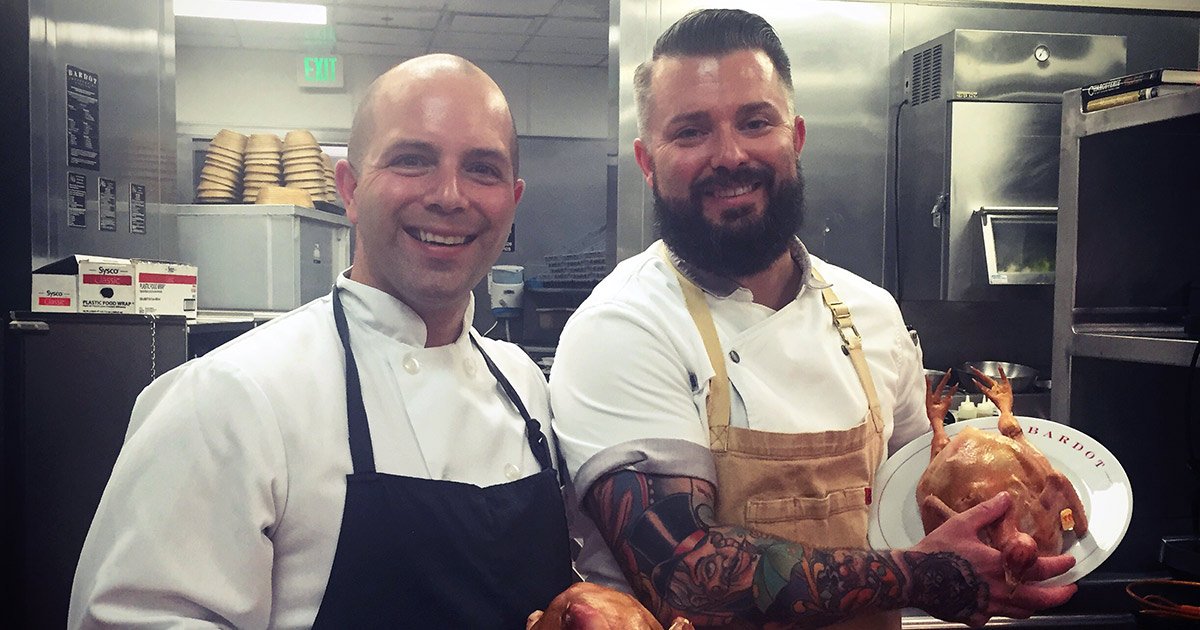 Bardot Brasseri is a Michael Mina Group restaurant established in the Aria Hotel in Las Vegas, NV. It occupies a restaurant promenade that includes Jean-Georges Steakhouse, Herringbone, and Carbone. Together they comprise Aria’s a new world/old world dining experience. Brasserie Bardot has been receiving a lot of press lately. It’s only two years young and has a very thoughtfully constructed menu with unique approaches to French brasserie and café classics.

Bardot’s space is carefully designed. It reflects the diners’ expectations of a brasserie, using stone tiles, mirrors, wooden chairs, and an open kitchen. But the gold accents, high ceilings, and center bar set it apart and bring some Las Vegas glitz to the beautiful restaurant.

Chef Joshua Smith is a Las Vegas native who has an extensive résumé and years of experience on the strip and elsewhere in the country. He is well known in the small community of culinary professionals in Las Vegas. Chef Josh not only successfully manages the restaurant’s menu and the restaurant operations but also is the intermediary between the Michael Mina Group, MGM Grand, and the Culinary Workers Union.

Chef Josh has taken a very structured approach to building the unique menu at Brasserie Bardot. It has ample references to brasserie classics as well as dishes that take brasserie food to new frontiers.

One such brasserie classic is the roasted chicken, which he calls the backbone of a brasserie. His parameters were clear—juicy, tender, well seasoned throughout, a complex natural flavor, and a very crispy skin. First he had to find the right bird. He discovered that the Buddhist approach to raising and harvesting chicken creates the tenderest meat, because the tendons can be drawn out when the chicken is hung from its feet. Then he found light brine creates a good base to work with for seasoning. Experiments ensued for getting the crispiest skin. Applying a Chinese duck cooking approach seemed logical once he explored the science behind it. Blanching the chicken par-cooks the skin and lightly renders the outside fat, allowing a better drying process. Then the chickens, sporting a light brush of tamari, are air-dried in the walk-in using a fan. 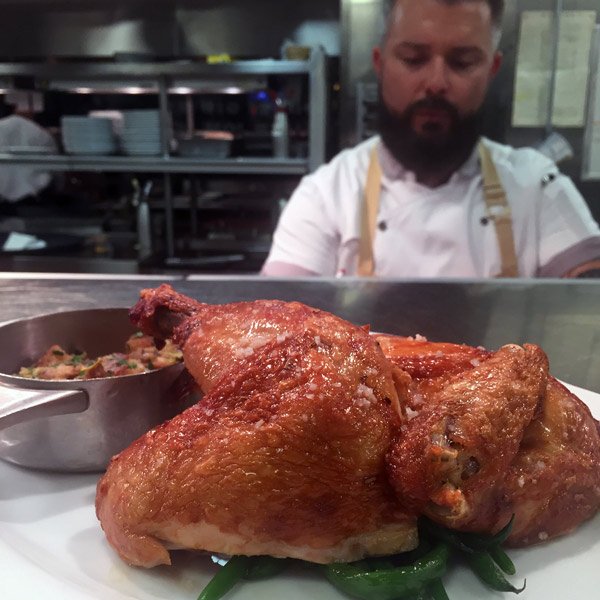 The chickens are roasted 90% of the way with aromatics in the cavity and steaming mirepoix in the roasting pan. Then they’re rested and fabricated, thigh and breast together. For pick-up during service, the thigh and breast are cooked under low top-heat.

During Chef Josh’s exploration to get crispy skin, he made an accidental discovery that was very important. Apparently, basting the chicken with butter introduces moisture to the skin because butter is composed of at least 5–10% water. Hence, basting with rendered chicken fat creates a much more consistent crispy result.

The chicken is served with sautéed haricot vert and a mushroom bread pudding.

What else do you expect to see on a brasserie menu? Bardot Brasserie has everything from charcuterie plates to foie gras, from mussels to beef tartare, and from onion soup to Parisian gnocchi.

The escargot dish was also a creative morsel in disguise, pun intended. Chef Josh serves escargot in a ‘new-found’ shell with parsley and garlic butter. Yes, puff pastry and garlic butter are classic pairings for these earthy animals but emulating the shell using puff pastry is brilliant. The snails are served with mushroom and hazelnut ‘soil’ to further accentuate the nutty and earthy tones associated with them. 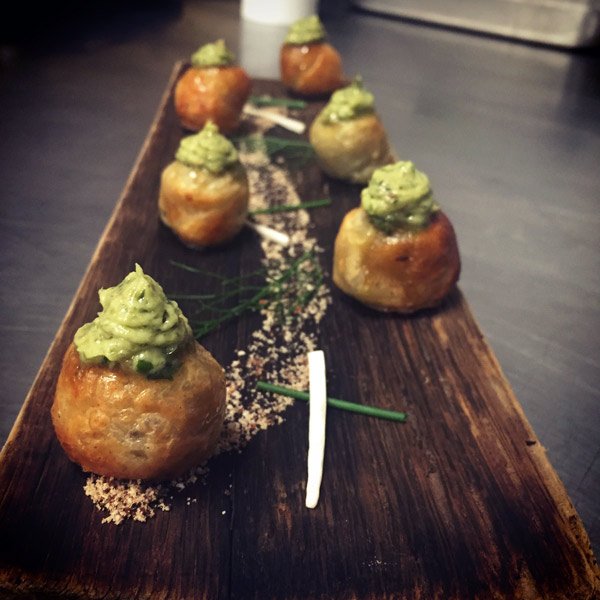 Beautiful escargot in their newfound homes made out of puff pastry

At the time I visited the restaurant, it felt as though all the growing pains were over and the kinks had been hammered out in the operation. Chef Josh was finally able to start investing time into his creative process. He was working on a rustic, leak-lined chicken, squab, and foie gras terrines bound together by glace, as well as truffle juice. I’m excited to continue following his successful creations. Thanks for having me in your kitchen, albeit for only a day!