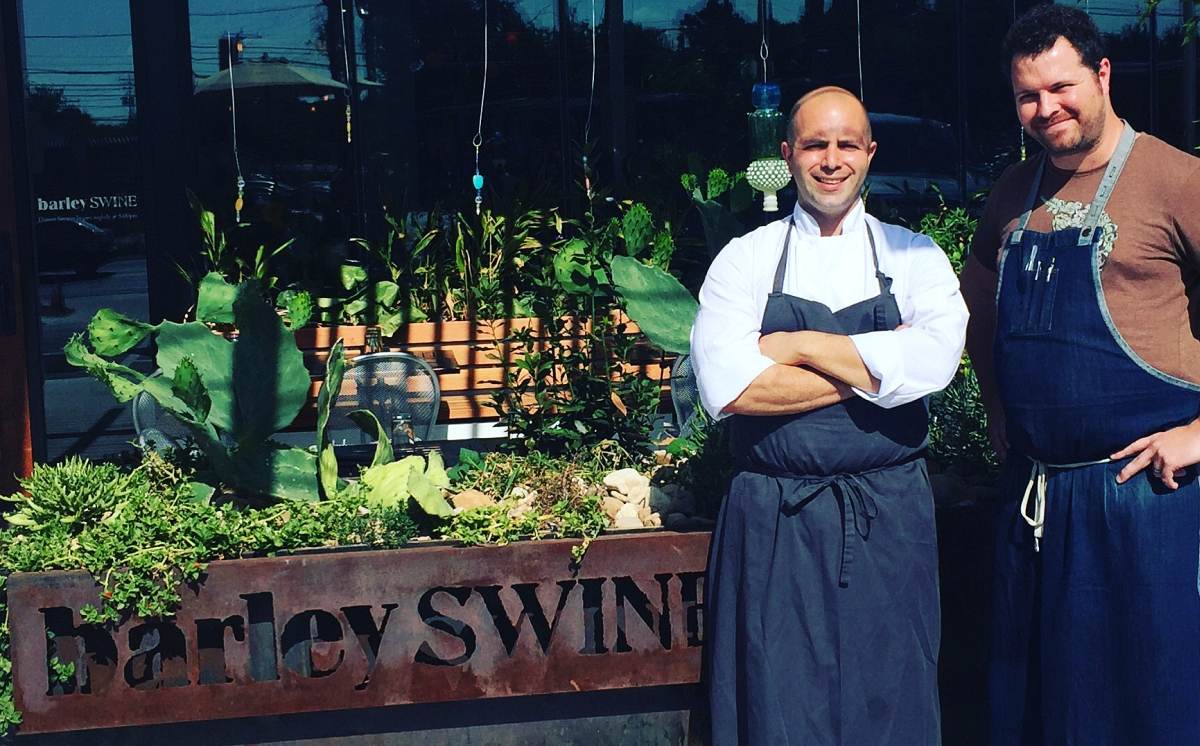 Having started our tour de stage in Mexico, coming to the Southwest and Texas, the land of Tex-Mex, BBQ, and burgers, felt very much like taking our journey full circle. We started our eating adventure in Texas with Tex-Mex in Houston and finished with BBQ in Austin. We’ve had different representations of barbecue across our journey in the South, but Texas-style barbecued short ribs, brisket, turkey, and smoked sausages were probably some of the best bites we have ever had. And while Sayat worked with CIA Chef–instructor Mark Elia at his Texas-style BBQ company in the Hudson Valley during his first and second year at the CIA, eating Texas BBQ in Texas was a different experience.

Austin, the state capitol, is an innovative tech-haven, a food-truck and BBQ city, the home of Whole Foods, and many beautiful and cherished farmers markets. We cancelled one of our stages in Austin because we were emotionally drained after learning of the terrorist attack in Nice, France, where we have friends. But, Barley Swine was an incredible stop on our journey.

Chef Bryce started off in his family’s restaurant before heading out to culinary school in San Francisco. After a couple of stints in San Francisco and Texas, he harnessed his entrepreneurial spirit and focused on building a restaurant with local community of suppliers who emphasized humble yet sophisticated creations in a casual and warm atmosphere.

At Barley Swine, the cooks are excited and proud of the restaurant’s concept, its food, and the work they are doing there. They are encouraged to participate in the daily operations meeting to talk about new dishes, streamline processes between the AM prep team and the PM service team, and highlight new produce that is coming in from the local purveyors. The sous chefs are this locomotive’s engine, not only in the daily production but also the creative process. Nose-to-tail is not just a phrase that gets thrown around here but a paradigm that determines the creative forces that shape the cuisine at the restaurant. For example: grouper heads are turned into corn dogs, pig skin is transformed into noodles, fish skin is crisped up for garnish, fennel flowers are added to the granita to capture a haunting aroma, and pigs faces are turned into Pig Face Buns. 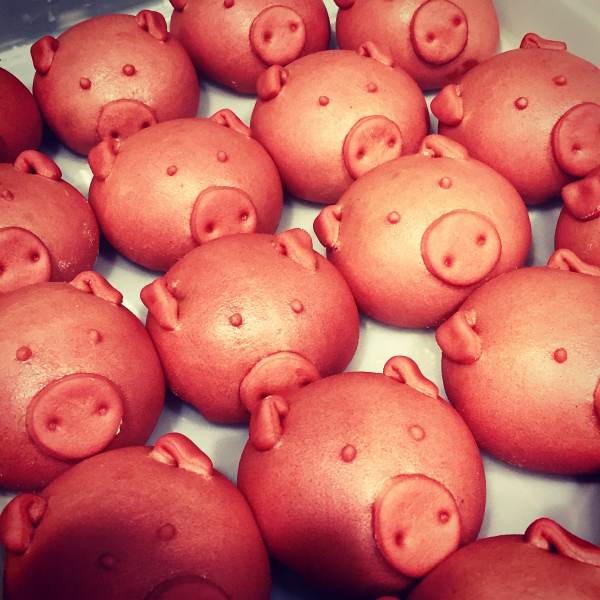 Pig face pork buns are made of fermented beet juice and steamed bun batter for the dough and are filled with local pork, bananas, peanuts, and peanut butter fruit 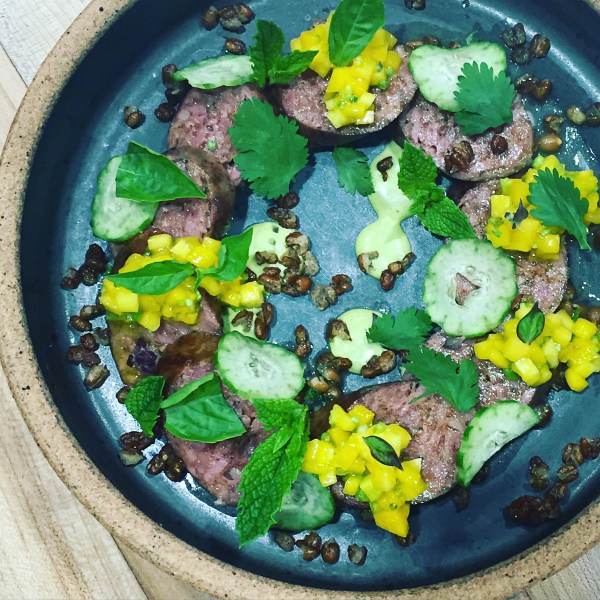 Chef Bryce was strongly influenced by the farm-to-table perspective predominant in the restaurants where he worked in California. What I found uncanny was the resemblance of the structure of the restaurant to Quintonil, one of our stages in Mexico City. Chef Bryce is often on the line, plating with the cooks, checking the food, and firing away plates with an unhurried yet stern demeanor. The plates are homey yet refined, flavorful, colorful, and beautiful. Barley Swine is another reminder that haute cuisine does not have to be at odds with simplicity and hospitality.

For a small restaurant, the processes at Barley Swine are very structured. Though the cooks are empowered to take ownership of their stations, the chain of command was very much apparent. The unhurried prep hours quickly transitioned into an operations meeting and briefing, which slid seamlessly into the sit-down family meal. Then there’s a verbal check with the status of each station and a forum to capture some suggested improvements. After this briefing there is the “food show” right before service—a physical and final check—where each station puts out the dishes that they will be running out of their stations. This was also my opportunity to taste all the dishes at the restaurant. I stopped at the granita project and join in the tasting fun. Cooks come around as well when there are dishes they haven’t experienced before. And when the front-of-house staff joins in, the tasting turns into a productive discussion.

A professional goal that I’ve set for myself is to follow my hunches or, if the time is not opportune, to capture said hunches in writing. There were three things that stood out to me during the tasting.

I smelled something pleasant with the porridge dessert that was incredibly aromatic but definitely elusive. It was busy so I put aside the thought until I had a chance to speak with the pastry chef. He told me that they used koji (fermented rice grains) for the porridge. Fermenting rice is a technique predominantly used in making miso, but by using the byproduct of miso it added incredible depth to the dish.

The second thing that stood out to me was the grilled potato dish with peanut ranch. The concept of peanut ranch alone sounds very unique. It’s aerated, adding to the textural contrast of the potato, peanut, and pickle dish. There are garlic and onion flavors but there was something else. I asked what the acid was in the ranch sauce. Natalie Van Note ’15 casually said, ”Oh that’s the peanut yogurt, we make here at Barley Swine.” 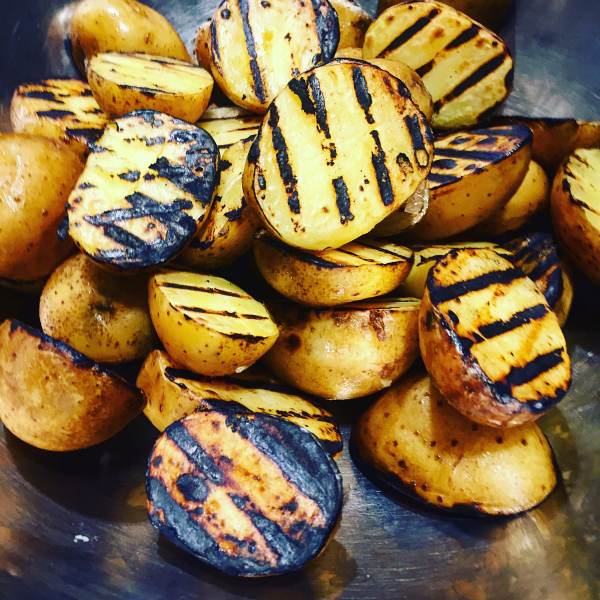 These potatoes are grown in Austin, cooked in pork fat, grilled, than broken and deep-fried. They’re served with pickled cucumbers, peanut ranch sauce made with peanut yogurt, savory vinaigrette, and beer cooked peanuts. A most unexpected and flavorful dish

The third thing that I noticed was the chicken fat gordita (a thick tortilla that can be compared to a flatbread). It’s not difficult to tell fresh masa from one that is made from packaged corn flour. The act of nixtamalizing corn and grinding it into masa is not a very complicated procedure. But to me, it represents an homage to the Tex-Mex tradition that haute cuisine often overlooks, a disciplined commitment to using local products, to cooking from scratch and building great flavor. 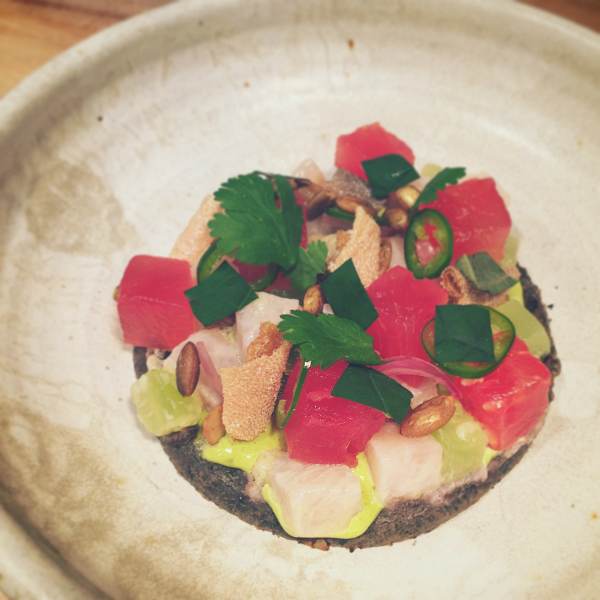 Black fish, chicken fat gordita, watermelon and chile This dish is of course visually appealing but what we as cooks find more impressive is that barley swine nixtamalizes its corn for the masa in-house

The food show quickly transitioned into the buzz of service. It was a relatively slow day. The big push quickly died down and I checked my phone. I had received many notifications saying my friends in Nice, France were ok. Despite that, a heavy feeling came down that fought the impressive stage experience. I stayed focused until the end of my time at Barley Swine, wrapped up my notes, and left for the long drive to Las Vegas.