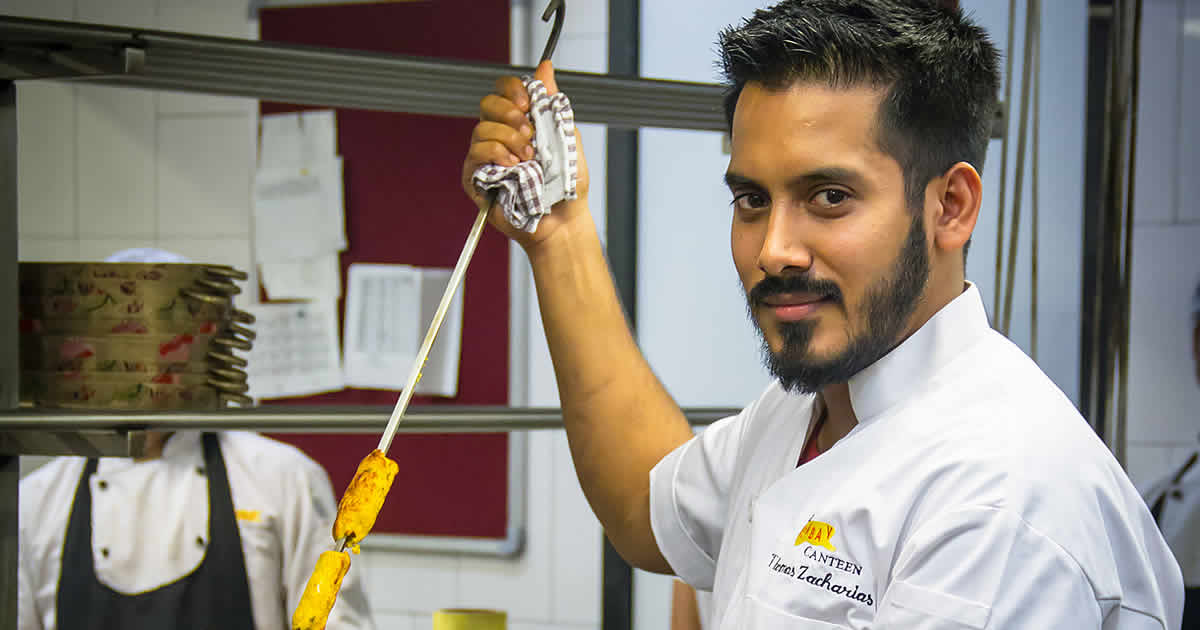 “The CIA was like a culinary wonderland for me and I felt like a kid in a candy store with the plethora of resources, information, opportunities, and culinary talent on campus.”

What’s it like to be a food professional?
The kitchen is a hot, intense, and dangerous territory that thrives on organized chaos. There’s something about a busy kitchen that is comforting yet irksome enough to keep you on your toes. The other cooks, much like you, are often overworked and underpaid, making them either terminally grumpy or irrationally eccentric! Your chef will not hesitate to scream or insult you for even the slightest of errors on your part—like the dots of vinaigrette around the salad on a plate not being evenly spaced. While that aspect of kitchen culture has started changing for the better, it still happens.

So why would someone want to pursue this career?
Simply because if you can get past all the hard work, stress, and drama and still love the daily grind of being a cook, it is rewarding quite unlike any other profession. You create something every day—not just anything but meaningful, comforting, and delicious food.

You can also do this in a home kitchen, but cooking for friends and family only relies on understanding the basics and applying a certain level of judgment and practicality. Preparing food in a restaurant on the other hand usually demands several intricate steps, juggling a plethora of ingredients and flawless execution from the cook.

Like many chefs, my love for food and cooking can be traced back to my childhood. I was a relatively quiet kid growing up, timid even. Sports didn’t excite me. These days you would call me an introvert, but back then I was socially awkward, and the thought of speaking in public made me break out in a cold sweat. While my friends were out kicking balls on the field or playing video games, I dreamt of food.

I felt like the odd kid out at the time but in retrospect, I realize I was just different. The one place where I really felt at home was in the kitchen—my ammamma’s kitchen specifically. It was where I could lose my inhibitions, be myself, and create something I cared about and also tasted delicious.

But it was not just about the taste of the food. Here was this marvelous thing that not only satiated appetites but also brought people together unlike anything else. My grandmother’s cooking fascinated me because, quite simply, it made people happy. I wanted to be like her, to have that “super power” that gave so many people joy.

How did you get started?

In the late ’90s, I decided to plunge into the metaphoric culinary fire and set out on the tough, drawn-out road to becoming a chef. Friends as well as acquaintances from the industry tried to discourage me. “The hours are crazy, it’s terribly stressful, and you’ll have no social or family life,” they all said. “Oh, and for all the hours you put in, the money is dismal,” someone else would chime in.

People couldn’t quite understand my wish to make a career doing something I loved. But I was driven by the idea of “feeding people happiness”—so much that I believed my passion would override everything else.

There were no dedicated culinary schools in India back then; it seemed to be a “leftover” career option for kids who weren’t good enough to get into engineering or medical school. So I completed a four-year Hotel Management course at Welcomgroup Graduate School of Hotel Administration (WGSHA), Manipal, one of the premier hotel management schools in India. Most of my batch-mates didn’t care for cooking, and even the few that did ended up changing their line of work. Perhaps only six or seven out of my cohort of 92 went on to become full-time chefs.

For the few of us who persisted, we had to plough through the initial years of drudgery. It wasn’t until I started working at the three-star Michelin restaurant Le Bernardin in New York City that I realized there is a whole other side to being a cook that was really exciting. The adrenaline rush from putting out hundreds of plates a night, each one made to exacting standards, at the right temperature and at the right time, is akin to bungee jumping—except that you’re doing it six nights a week!

With every step I took on the culinary ladder, I discovered new challenges and joys in my job. Currently as an executive chef in charge of an entire kitchen brigade, there is never a dull moment. It is not uncommon that half the kitchen team calls in sick, a couple of refrigerators break down, and the vegetable supplier is late on his delivery all on the very same day—and in all likelihood, it is the busiest day of the week. The speed at which one has to switch from grievance counselor to grocery shopper to guest relations manager to accountant is unimaginable.

Nevertheless, I get to nurture young cooks, develop lasting relationships with suppliers, interact with people who truly appreciate food, and, of course, create entirely new dishes.

Of all the traits one needs to become a better chef and be truly happy in this line of work, being passionate is perhaps the most vital. Passion for food, serving people, the energy of a busy kitchen, and leading a team of motivated cooks has its own challenges and rewards.

It is this passion that allows me to endure even the most stressful days on the job. As I lie in bed exhausted from a busy Friday night’s dinner service—feet cramped, back aching, missing home, and craving some sort of a social life—it’s perhaps the one thing that makes me want to get back to work the next day and do it all over again.

George Bernard Shaw once said, “There is no sincerer love than the love of food.” For me personally, cooking for someone is far more gratifying. But then again, Shaw never had the pleasure of being a chef.

What was your experience like as a CIA student?
The CIA was like a culinary wonderland for me and I felt like a kid in a candy store with the plethora of resources, information, opportunities, and culinary talent on campus. I like to think that I squeezed every bit out of my time at the CIA.

I made some very close friends during my time there both within the student body as well as the faculty, and these relationships truly enriched my experience. I particularly enjoyed my time as the editor-in-chief of La Papillote, the campus newspaper, for six months.

Where has your education taken you since graduation?
After working at La Berenardin under Chef Eric Ripert, I returned to India and ran the kitchen at Olive Bar and Kitchen, Bandra, Mumbai under the guidance of a fellow CIA alumnus, Chef Manu Chandra.

I then traveled extensively to all corners of the country to entrench myself in the different elements of Indian home cooking. These trips took me to 18 states in India, including Gujarat, Himachal Pradesh, Sikkim, and Nagaland. Inspiration from the diverse flavors of India and the bounty of the Mumbai markets—as well as from my grandmother’s kitchen—were reflected in my constantly changing menu at The Bombay Canteen, where I took over as executive chef in 2014.

Where do you see yourself in the future?
As a chef, my food philosophy involves showcasing regional Indian cuisine in a new avatar, celebrating local and seasonal Indian ingredients, and creating memorable food experiences that get people excited about Indian food all over again. I’ve developed a fun and curiosity-driven approach to food and hospitality, and a desire to constantly push boundaries of what Indian food is perceived to be—and that’s what drives my team at The Bombay Canteen.

It’s important to me to create a positive work environment built on nurturing and mentoring rather than abuse. Changing the perception of chefs and professional kitchens is a subject that is very close to my heart.

What advice would you give to students interested in a food-related career?
Stay passionate, know that you need to be constantly learning, be resilient, and have fun while you go through this life as a food professional. It’s not an easy industry, and there will be days when it gets so crazy you might want to give up. But you just need to power through and come back the next day charged up and willing to take on the battle with a smile.

For the first few years, focus on just learning as much as you can from the best chefs you can possibly learn from. Do not chase higher positions or salary. Rough it out in the beginning, get the right training, and it’ll definitely pay off in the end.

Tell us about a moment in your career that really stands out in your memory.
In September 2013, I set out on a culinary sabbatical traveling around France, Italy, and Spain for four months to explore more than three dozen towns and cities, visiting local farmer’s markets, dining in family-owned and avante garde restaurants, and drinking my way through the finest wineries.

The gastronomic highlight of my four-month-long food trip was not the authentic tagliatelle al ragu I tasted at Satyricon, a traditional family-run osteria that’s a 20-minute bus ride from Bologna. It wasn’t taking in the seductive wafts of prosciutto and Parmesan inside the marvelous Salumeria Verdi on the main street of Parma. Heck, it wasn’t even my elaborate private tour of Leonardi’s spectacular balsamic vinegar production house in Modena, where I tasted perfectly balanced vinegars aged from 30 years all the way up to a hundred!

It was the meal I had (thanks to a last-minute cancellation) at Osteria Francescana, Modena’s Michelin three-star modern Italian restaurant that in 2013 was voted by Restaurant magazine as the third best restaurant in the world. Chef-Owner Massimo Bottura is known to seamlessly blend culinary tradition with contemporary technique and design. His wife Laura works the dining room and explains the inspiration behind each dish with a passion rivaled only by that of her husband.

This particular dinner was so memorable not because of what was on the plate. Sitting in Osteria Francescana, listening to Laura eagerly describe Chef Bottura’s affinity towards his grandmother and her influence on his cooking, I had an epiphany. In a priceless moment of self-revelation, I suddenly realized the answer to a question I had locked away for years: what kind of a restaurant do I eventually want to open?

The answer was right before my eyes. I realized then that my purpose was to showcase India’s cuisines and the bounty of culinary wealth in our country.

Incidentally, four years later I ended up hosting the same Chef Massimo Bottura at The Bombay Canteen to showcase Indian food to him. It’s amazing how life comes full-circle sometimes.

Is there anything else you’d like to share?
Yes, I hope you enjoy this video of when I delivered the valedictorian speech at my CIA graduation ceremony. Watch Thomas Zacharias’ speech now:

Chef Thomas Zacharias majored in culinary arts at The Culinary Institute of America in Hyde Park, NY. He is the executive chef and partner of The Bombay Canteen in Mumbai, India.