The Other Culinary Arts: Food Stylist 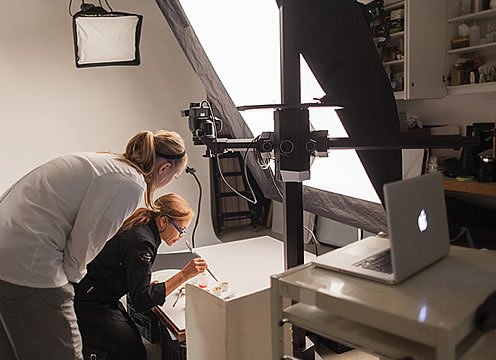 A passion for food doesn’t always result in a career in the kitchen. Many of our alumni find themselves in careers informed by what they learned at the CIA and shaped by unexpected and eye-opening experiences.

I was a career changer when the term wasn’t even coined yet. I’d decided to just follow my heart, a heart that yearned to express the love I had for people through food.

During my first career in the fashion industry in the ’80s and ’90s, I was considered a successful cover model. I was flown to exotic locations around the globe in search of the perfect picture. But something was missing for me. My attention was never on haute couture but rather on haute cuisine. I’d read and collect cookbooks, not fashion magazines. My goal wasn’t shopping for fancy clothes but rather hitting the streets to see what kind of food was out there. Simply put, my passion was food.

Growing up, I spent summers in the northern mountains of Sweden. I watched my grandmother prepare slow-simmering stews on the same three-burner wood stove we still use when we visit. I remember canning the vast assortments of wild mushrooms and berries we foraged deep in the forests. My grandfather often came home with wild game hanging off a whittled branch or draped across his shoulders. There was always a giant ceramic bowl on the counter filled with offal soaking in milk. The lake in front of the cottage was chock full of vital resources, and we would have fresh fish for breakfast. I was taught to have respect and gratitude for what the land gave us, to use only what you need, and to stretch an ingredient.

As a teenager, my favorite TV channel was PBS, especially when Julia Child or Jacques Pépin was on. I learned to cook using Julia Child’s VHS library, which I still have, some 31 years later.

For a whole year, I saved up to take a three-day cooking class in some woman’s home. Her name was Martha Stewart. Because I had no car, she picked me up and dropped me off at the train station every day. Martha took me under her wing and gave me my first glimpse into the cohesiveness of food, its presentation, and its relationship to the surrounding elements.

In the late ’90s, I was living in Europe with my own thriving business. While on a visit home, I met my mother for lunch at the CIA’s Escoffier Restaurant. As soon as I walked onto the campus I thought, “This is me.” I knew I belonged there. Within one year, I’d sold everything and was back in Hyde Park hoping to learn at the feet of the gods who wore toques and aprons. It was the most difficult and best decision I have ever made.

I learned so much at the CIA, especially “mental mise en place.” It changed and clarified me. I became stronger and more perceptive. I learned about always being one step ahead, working hard with a solid and honest attitude, paying extra attention, and owning up to my mistakes and learning from them. To this day, I apply these principles to every area of my life.

My start in food styling was on externship. I had an interview at the then-little-known Food Network. Everything was new there and you could feel a sense of excitement and energy. I learned so much every day. If I didn’t know how to do something, I asked to be shown. If an errand meant running a mile to get it done, I did it.

After graduation, I went back to the Food Network and worked my way up the ranks. I finally started my own media business and the Food Network, among other media outlets, became my clients. Today, my team and I support chefs, cookbook authors, TV personalities and their sponsors and brands at PR-related venues, cooking series, web-based series, cooking demonstrations, and print for magazines and books.

In the last 13 years, my company, Gourmet Butterfly Media, has worked on hundreds of shows with nearly all the chefs who are household names—including Padma Lakshmi, Tom Colicchio, Rocco DiSpirito ’86, Sandra Lee, Rachael Ray, Anne Burrell ’96, Ming Tsai, Sara Moulton ’77, Sunny Anderson, Guy Fieri, Bobby Flay, the Neelys, Cat Cora ’95, Michael Symon ’90, Aaron Sanchez, Ellie Krieger, Donatella Arpaia, and Marc Forgione. It has been a privilege learning and growing alongside them. I’ve seen many of them go from being hard-working line cooks to mega-stars. Even non-chefs like Sheryl Crow, Eva Longoria, Debbie Mazar, and Gwyneth Paltrow have enlisted me to help them prepare for their cookbook debuts in media venues.

My biggest learning experience was a two-year stint on the road styling exclusively for Tyler Florence’s Food 911. We traveled to nearly 100 households, transforming homeowners’ kitchens into mini TV studios. He taught me that you must never attempt to make “fake” food on TV. He would cook all day to prepare an absolutely delicious dish so the guest’s on-camera reaction was totally genuine.

Probably the greatest compliment I’ve received came from Emeril Lagasse when he called me “chef.” We worked side-by-side for eight very intense weeks on his program Emeril’s Table. He put his trust in me and asked my opinion on everything. I was blown away. Food styling may have a glamorous side, but as a freelancer, I have yet to experience that. It is an intensive industry that is highly competitive. You will be surprised at how many different hats you wear in a given day—producer, recipe tester, script writer, teacher, chef, sous chef, dishwasher, accountant, driver, shopper, roadie, moving company, handyman, artist, and set designer, to name a few. You often work with little or no sleep under tough conditions with no running water or electricity.

As a stylist, you bring your entire kitchen on your back, including prepped food in various stages and set design props for the chefs. You are always under time pressure on TV, and must think on your feet. You are rarely in the same place twice in a week. Without the proper culinary training, time management skills, willingness to learn, and pure hard work you cannot run a successful food-styling business. Many come into the field thinking it’s glamorous, but they are often disappointed and can’t make it for the long haul. Your job is to realize your client’s vision. You disappear even while you are essential. You are not the star; they are.

My food-styling career has been filled with odd schedules and lots of travel. I’m proud to say that even as a single parent, I’ve managed to raise my wonderfully smart and talented son, and still have a fulfilling career.

And, really, it’s been my dream job. Instead of the camera being aimed at me, it is aimed at my chefs and our food. When people are happy with the final product, it makes my heart sing. That sense of accomplishment is where I find glamour these days. In the future, I’d love to teach. I hope to influence budding foodies and stylist wannabes, and show them that there is more to media than the shiny side. You may even find me back in the classrooms at the CIA seeking my bachelor’s degree. After all, to be a great business owner, you can never stop learning or giving back.

« Students Egg-cited to Use New Dining and Entertainment Space on CIA’s NY Campus » CIA Alumni in the News, August 2015