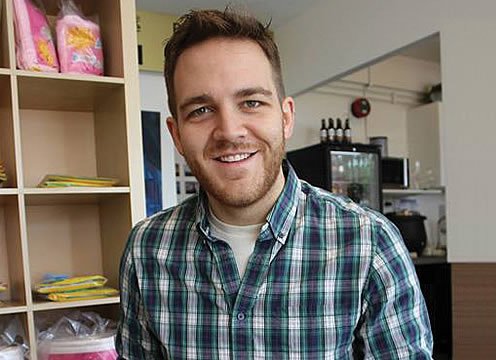 Creating a Career One Pixel at a Time

When Patrick Decker ’04 graduated from the CIA, he hung around on campus. No, he wasn’t loitering; he was stepping onto the first rung of his career ladder in the college’s publishing department. While there, Patrick worked on cookbooks, tested recipes, wrote captions, and managed the art for editorial projects. Talented and dedicated, he was soon snapped up by Rachael Ray for her Emmy-award-wining daytime talk show. Food styling was part of Patrick’s skill set—especially after taking a course and earning a certificate from renowned stylist Delores Custer. But after two years, he found himself restless. He was in the media business to be sure, a major area of interest, but he was becoming increasingly fascinated with digital technology and the web environment.

Here is where Patrick took the plunge. He cut himself loose from the security of a day-to-day job with Rachael Ray and ventured into the freelance world as a content developer for food and lifestyle publishers in all media. “It was terrifying to go freelance,” Patrick explained. “But I wasn’t going to grow if I wasn’t pushing myself.” And so began the work of putting together a “piecemeal” career in which he had to create the kinds of opportunities he wanted for himself. He did more food styling for Not My Mama’s Meals; developed content for Rachael Ray Digital, LLC; was the curriculum developer for Le Cordon Bleu’s Bleu Ribbon Kitchens; and blogged for the Cooking Channel’s recipe and food blog, Devour.

Simultaneously, Patrick, along with his husband Stephan Hengst ’97, was establishing the highly successful website BigGayHudsonValley.com with the goal of helping the Valley’s LGBT community stay connected and support each other. They maintain a digital repository of business listings and a calendar of local happenings, and planned events to bring people together to raise funds for other nonprofits.

All of his work ultimately netted him a position at Scripps Networks Interactive, which owns FoodNetwork.com, CookingChanneltv.com, and Food.com. Finally, he is in the pixelated world he had been aiming for. Today, as digital production manager, Patrick manages production from kickoff through execution and reporting of the company’s digital food brands. He collaborates with editorial, design, engineering, marketing, social media sales, and on-air teams to produce a 360° digital experience for viewers. He is in his element.

To those who want to craft their own career, he suggests starting a blog. He recommends learning to use still and video cameras, and creating well-written pieces that showcase great storytelling and have compelling visual content. “A blog is a great way of putting a portfolio together,” Patrick says. “It’s your calling card.”

The road to his current success was filled with great learning experiences, courageous leaps into the unknown, lots of self-motivation, and the ability to present himself and his work to advantage. For Patrick, life in digital production is the culmination of a dream, one he built for himself, one pixel at a time.