Home » News and More » The Lunch Box Remembered – The History of the Lunch box
September 22, 2016

The Lunch Box Remembered – The History of the Lunch box 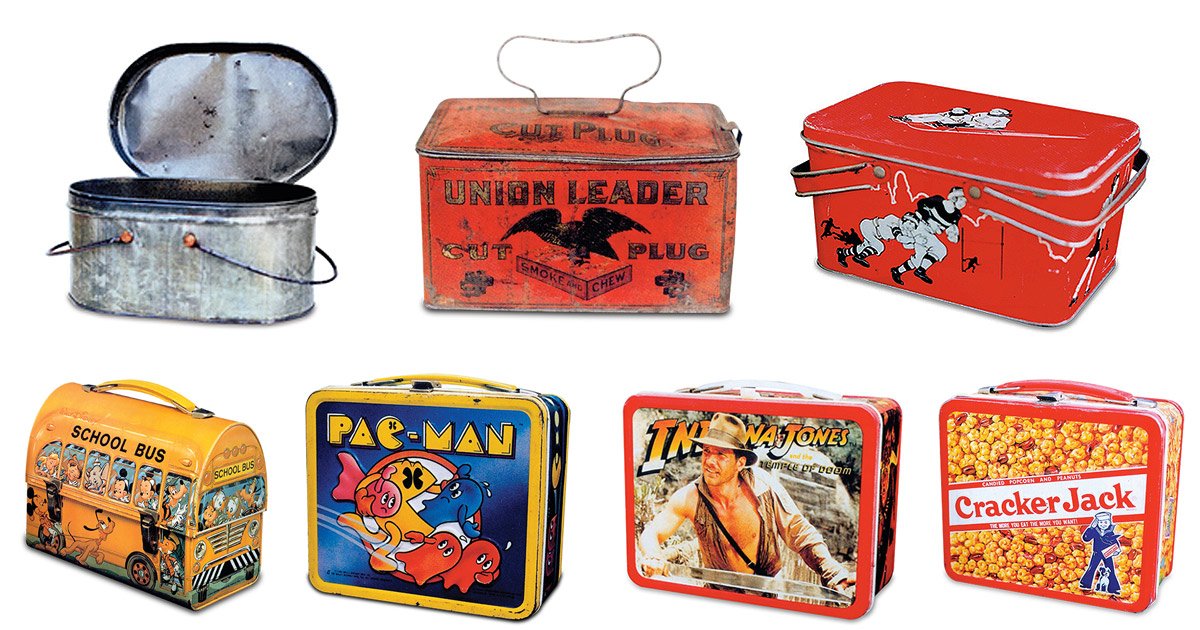 For generations, children and workers carried their noon meal in all manner of contraptions from animal skins to gourds, from wicker to oilcloth. Farmers in the fields would gravitate to the shade of a tree before opening the gingham cloth that held their midday repast. Children sat on the stoop of their one-room schoolhouse to quickly down their lunch so they had time to play. Then, with growing industrialization, a worker’s metal lunch box became a symbol of class status. Carry one and you were immediately tagged as a laborer who couldn’t afford to buy a hot meal.

By the 1880s, children began fashioning their lunch boxes out of used tobacco, candy, or biscuit tins. All that was needed was a little work to affix handles. Eventually, the companies saw the need and made the tins with handles already attached. In 1902, the very first lunch box designed specifically for kids was created. And in 1911, in what would later be considered a true stroke of genius, the American Thermos Bottle Company created the first worker’s lunch kit with thermos bottle—making a truly hot or cold beverage possible for the first time.

By the 1930s and ’40s the utilitarian tin box gave way to the more durable steel. But it wasn’t until television and blockbuster movies hit the mass market that the lunch box business burgeoned into a multi-million-dollar industry. TV characters emblazoned on the sides of boxes made them desirable kiddie status symbols.

In 1957, the Aladdin Company introduced a dome-top lunch box, which resulted in some pretty fabulous designs including Disney’s school bus lunch box, which was the best seller of all time. The ’60s saw the advent of embossed boxes that gave the images a three-dimensional effect.

At the height of their popularity, in the two decades between 1950 and 1970, more than 120 million steel and vinyl lunch boxes were sold. It is said that after a group of concerned mothers in Florida lobbied the state to ban steel boxes, claiming they could be used as unwitting weapons on playgrounds, a movement against the steel boxes spread across the country and vinyl took its place. These vinyl-covered cardboard boxes couldn’t stand up to the wear and tear kids were putting them through and ultimately they would fall apart. Attempts were made by the industry to appeal to teenage girls by introducing the brunch bag, with its shoulder strap and oval shape. In a last-ditch effort to revive a flagging industry, all-plastic versions were created, to no avail. The industry began a slow decline and by the mid-’80s companies started closing down production.

Now, at least for collectors, these vintage lunch boxes are all the rage and they are commanding top dollar in antique shops and eBay! Take a look at the boxes on these pages. Maybe you’ll find the one you carried to school every day.

Images from The Fifties and Sixties Lunch Box by Scott Bruce and Collector's Guide to Lunchboxes by Carole Bess White & L.M. White
« The Secret Life of CIA Chefs » Portable Food