Stories from the Lab: Sausage Making – The Right Stuff

Welcome back to Stories from the Lab. In my last post, my classmates and I created our very own pasta sauce. This time around, we find out why handmade sausage making is an art that few can master. The cutting, grinding, hanging, and fermenting are all steps that are crucial to the process. And in one of our lab classes, we did just that! We grinded and stuffed dozens of sausages. This process was so unique and exciting that I can’t wait to show and tell you!

Would you believe me if I told you that my class used 142 pounds of pork? Well, we did! To make these sausages, we used 111 pounds of pork butt and 31 pounds of fat (so that there was 75% pork butt and 25% back fat). All this meat needed to be cut brunoise size—yes all 142 pounds of it—which is approximately 1/8-inch dices. Cutting this meat actually took the longest time during the initial preparation. Even with all 14 of us students doing it, the cutting took more than three hours!

The sausage also required a lot of seasonings and spices.

Insta Cure #2 is a special curing ingredient that is used for fermenting or dry-aging any meat that will not be cooked further. This ingredient is formulated with sodium nitrate, sodium nitrate, and sodium chloride. These are added to help stop and prevent botulism from occurring during the curing period. It is dyed pink so that it won’t be confused with table salt. Dextrose was used as a “food agent and nutrient” for the bacteria and lactic acid which helps during fermentation. Bactoferm F-LC SafePro is a culture of bacterial strain for acidification.

Stuffing the sausage was my favorite part of this experiment. As a whole, my class used over six meters of hog casing, which was about 20 feet long! After we stuffed them we hung them in a controlled temperature environment for a couple of days. 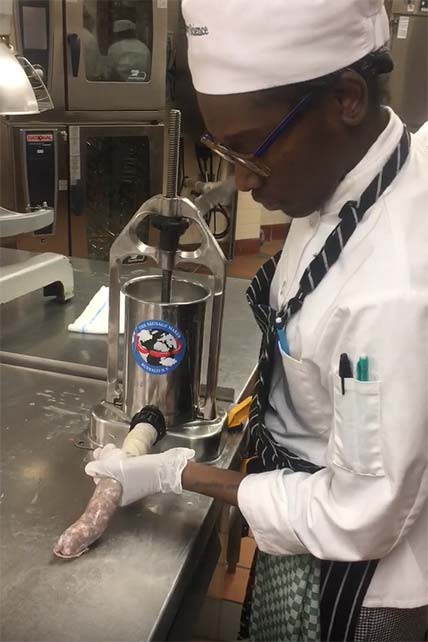 The cool part of this lab experiment was the fact that we had to send the sausages to an outside lab to get inspected. After the sausages were done fermenting, our instructor, Chef JJ Lui, sent a sample over to Certified Laboratories, Inc. in Melville, NY. At the lab, they tested the pork sausages for numerous bacteria including E. coli, Listeria monocytogenes, Salmonella, and Staphylococcus aureus. The results were all negative except for the latter, which had such a low amount that Chef Lui said it was harmless.

Making sausage is interesting but it can also be dangerous and even deadly if not done correctly, with the right measurements and precautions. That’s why the culinary science part of it is so important. After we found out the sausages were safe to eat, we happily packaged them and took them home to enjoy!

Next up, we explore the flavors and culture of Korea as we prepare that country’s national dish, Kimchi. See you then!