A $5,000 scholarship and tickets to Super Bowl XLIX are on the line for two CIA student teams.

Their finished dish needed to incorporate at at least three PepsiCo products. Including brands such as Frito-Lay, Gatorade, Pepsi-Cola, Quaker, and Tropicana—they had a variety of ingredients to choose from and each team put a unique spin on the challenge.

Is this competition the start of great things for these CIA students?
Matthew F. Johnson is considering a career in food-related media: “To see Anne Burrell struggle with some lines tells me I can do it. You don’t have to be perfect. It’s great to have this opportunity now as a CIA sophomore.” But his partner, Cullen Folks, isn’t sure that the camera limelight is for her. “I really just want to be in the kitchen and in the zone. I really want to be down and dirty on the line,” says Cullen. Combine their talents and they’re sure they make the perfect team!

As for the Greystone Girls, as you can call Olivia DeSalvo & Marie Taccino, they’re happy to have proven themselves as the visiting team. Representing the CIA’s California campus, the travel was just one more hurdle before the finish line. “This competition brought out a lot of creativity in me I didn’t know I had!” says DeSalvo. But one thing is for sure, while they’re proud to advance, this team is focused on winning. “The best part of competing,” says Marie, “was winning.” 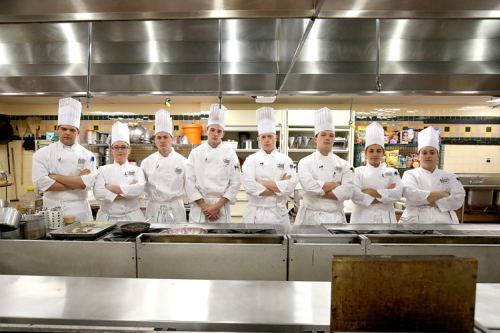