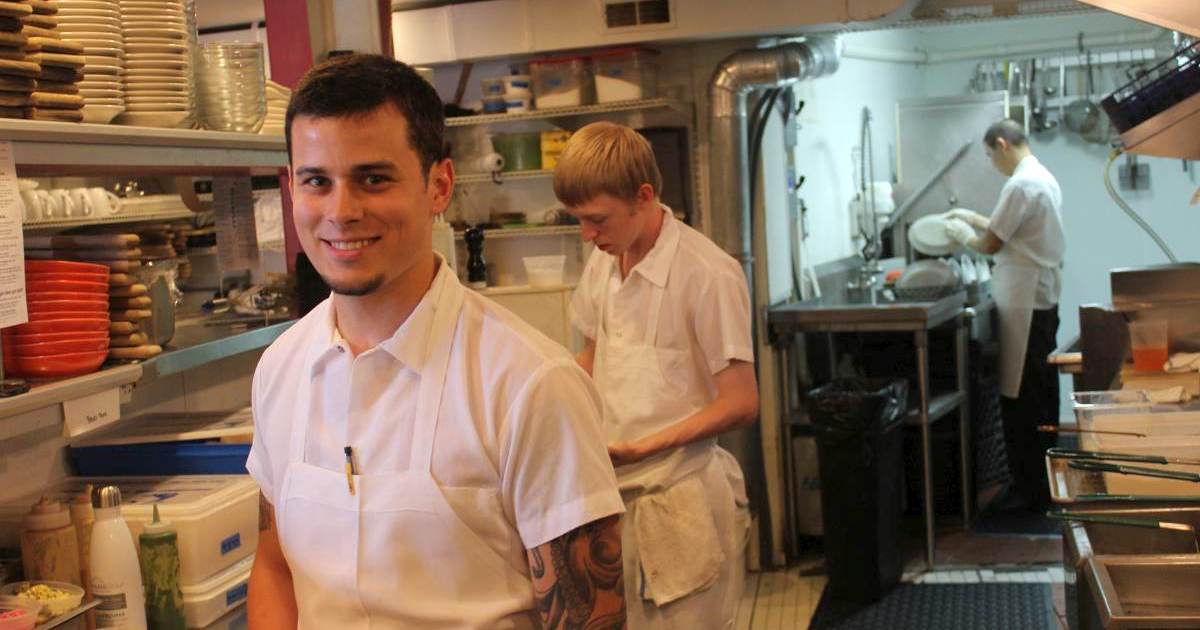 It glows orange, and sits right on the corner of Penhallow and Commercial Alley, in Portsmouth, NH. Welcome to Moxy! It’s the place where I spent last summer on my 15-week required externship for my CIA associate’s degree.

While doing my externship at Moxy I spent many long hours working the prep cook position. My daily duties included making stocks, sausage, and braising, as well as making pastries and ice creams. It was a lot of fun, yet really taught me how to prioritize my time in the kitchen. It also allowed me to work individually with Chef Matt Louis ’00, who would often talk to me about his past experiences working in kitchens. He would patiently give me advice, and would stop and show me if I was doing something inefficiently.  He is a great mentor, friend, and one badass chef. I remember hearing him recall his two-week stage at Noma, sharing experiences with me that most people never get to hear about. It was really great working with him—it was one of the better summers I’ve ever had—and it was really great to see him that morning as we caught up for a few minutes.

Chef Matt, who was not only an amazing mentor to me, but an extremely talented chef and incredibly kind person as well, runs Moxy. He is a graduate of the CIA, and has worked in some of the best kitchens in the country. I remember being awed by the fact that he had worked his up from Thomas Keller’s Bouchon to The French Laundry by staging there every chance he got. Eventually he landed a job there. He worked directly with Thomas Keller for years and was part of the opening team at Per Se in New York City. Thomas Keller closed down The Laundry and transported the whole entire team from California to New York for that purpose.

My stage was going to be pretty casual, and I came in early to catch up with the prep guy, Mike. Mike’s job is very important for obvious reasons. He is always in a really great mood and happy to be working. Everyone likes Mike. His Instagram is killer too.

Moxy is a bit unique for the area. It serves New England-style tapas. Only local farms supply the produce and animals, and fresh fish are brought in daily. The place does not own a can opener! There is a heavy emphasis on utilizing all of the ingredients, whether it is from whole-animal butchery to pickling vegetables in their prime season. Moxy also has a plot of land at the nearby New Roots Farm, where the team will go and pull weeds, water the garden, and pick what is fresh that day. The menu changes daily!

The food at Moxy is so amazing; I thought I’d take you on a visual journey of what I saw during my stage at Moxy. 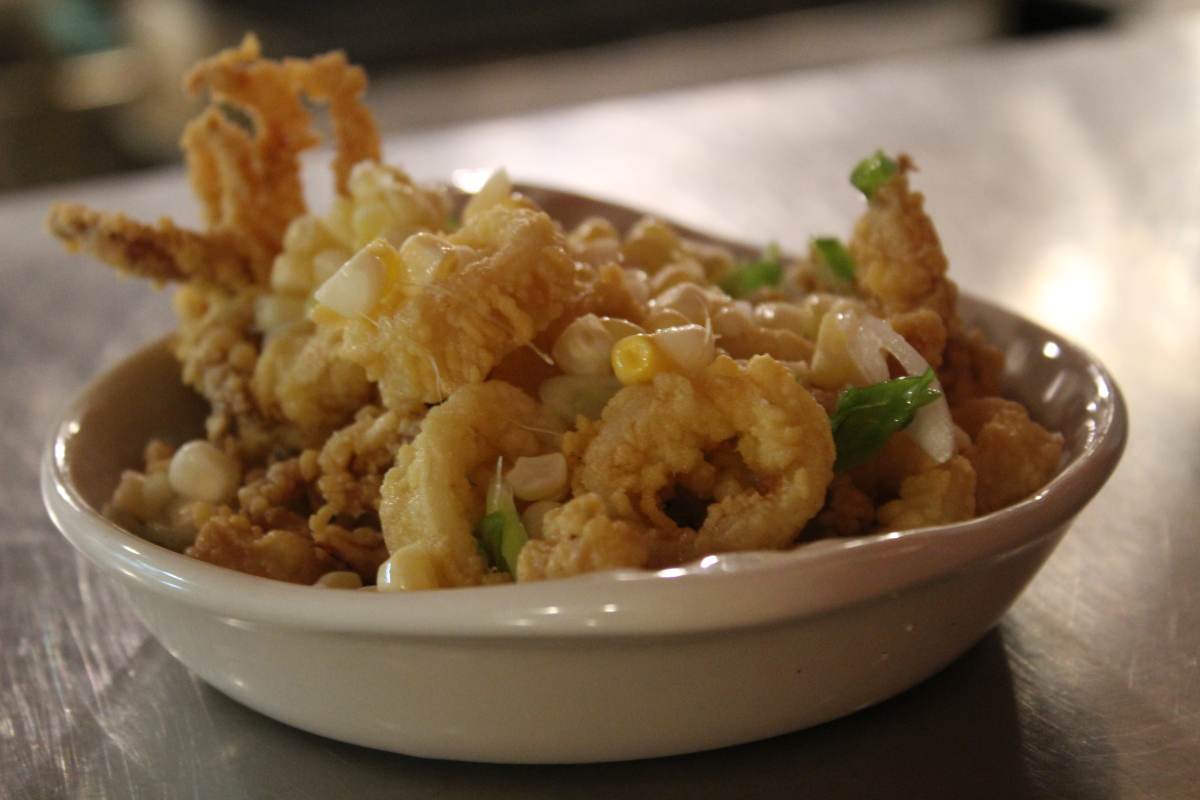 Tickets were ringing in very quickly, so it was nice to see the kitchen crew work in collaboration so smoothly out of the gate.  Local calamari gets delivered and cut each day, fried, and then served with a pickled pepper relish. This one is served with corn. 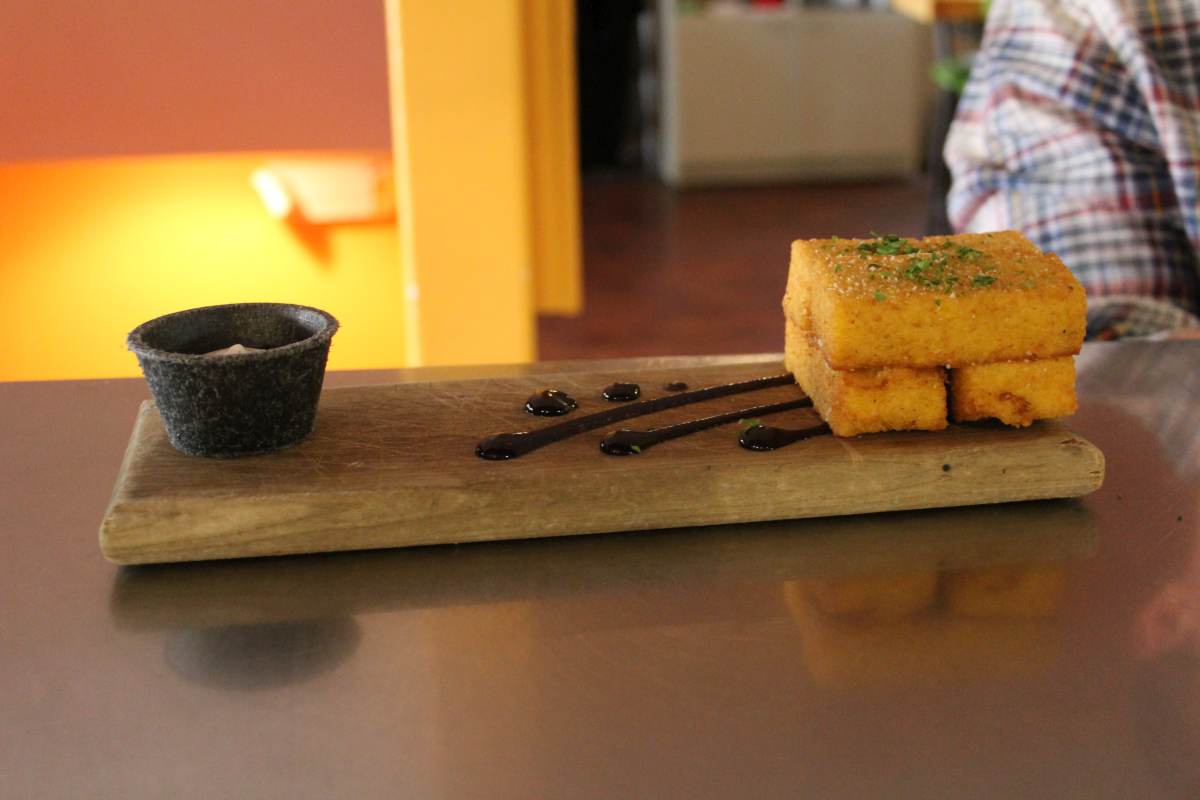 The hasty pudding frites are made from cooked cornmeal, which is pressed overnight and cut into little rectangles. Fried to order and assembled in a Jenga tower, it’s served with a house-made molasses BBQ or buttermilk dip. 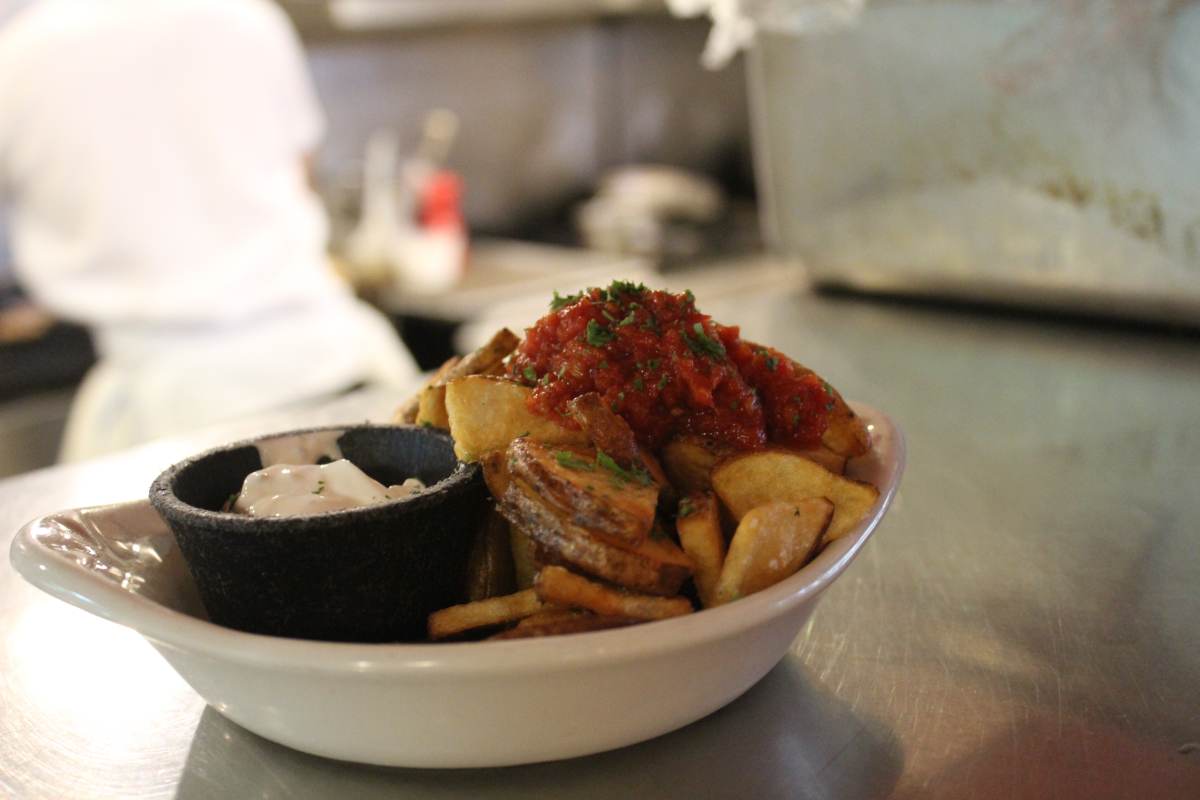 The crispy potatoes were blanched, first in water and then in oil, and then fried once more to create a super crispy yet moist patatas bravas, or in this case, “patatas Portsmouth.” They were served with a spicy tomato sauce, and an herbed sour cream. 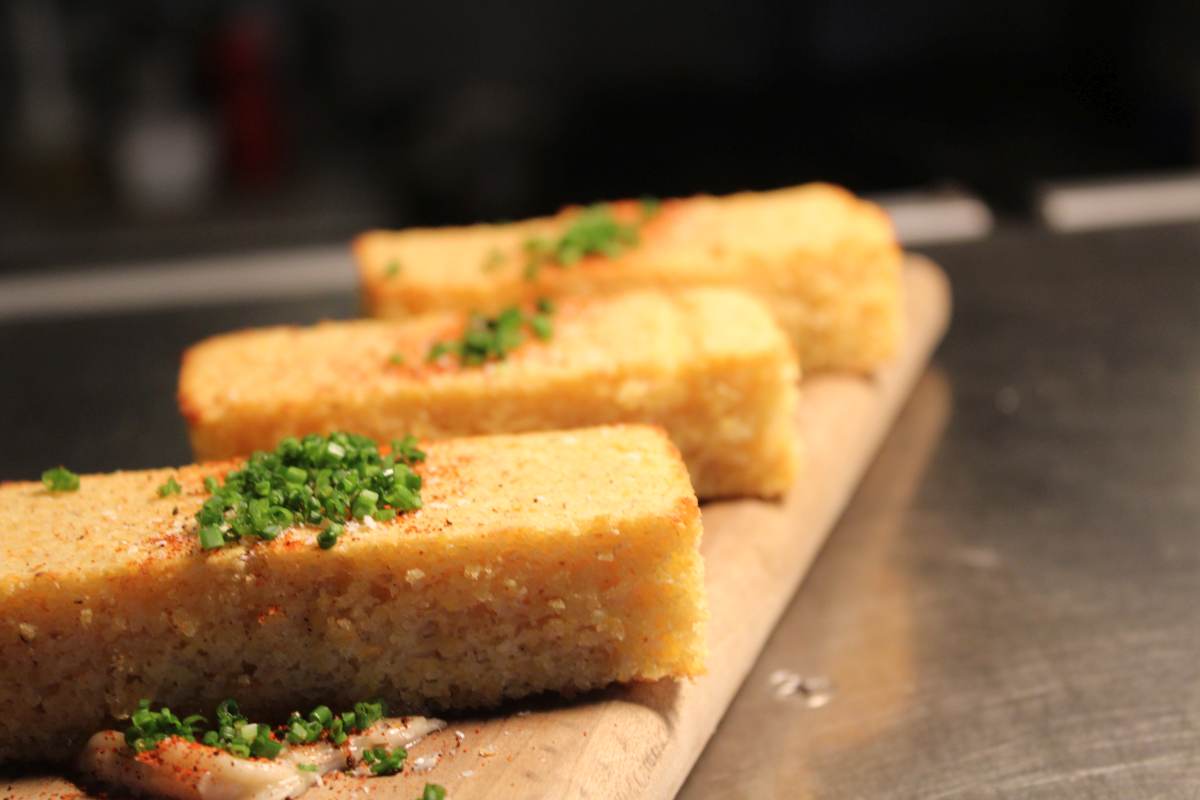 The spicy cornbread served with maple butter has been on the menu for quite some time, and for good reason. It’s made of corn, so it’s good for you. 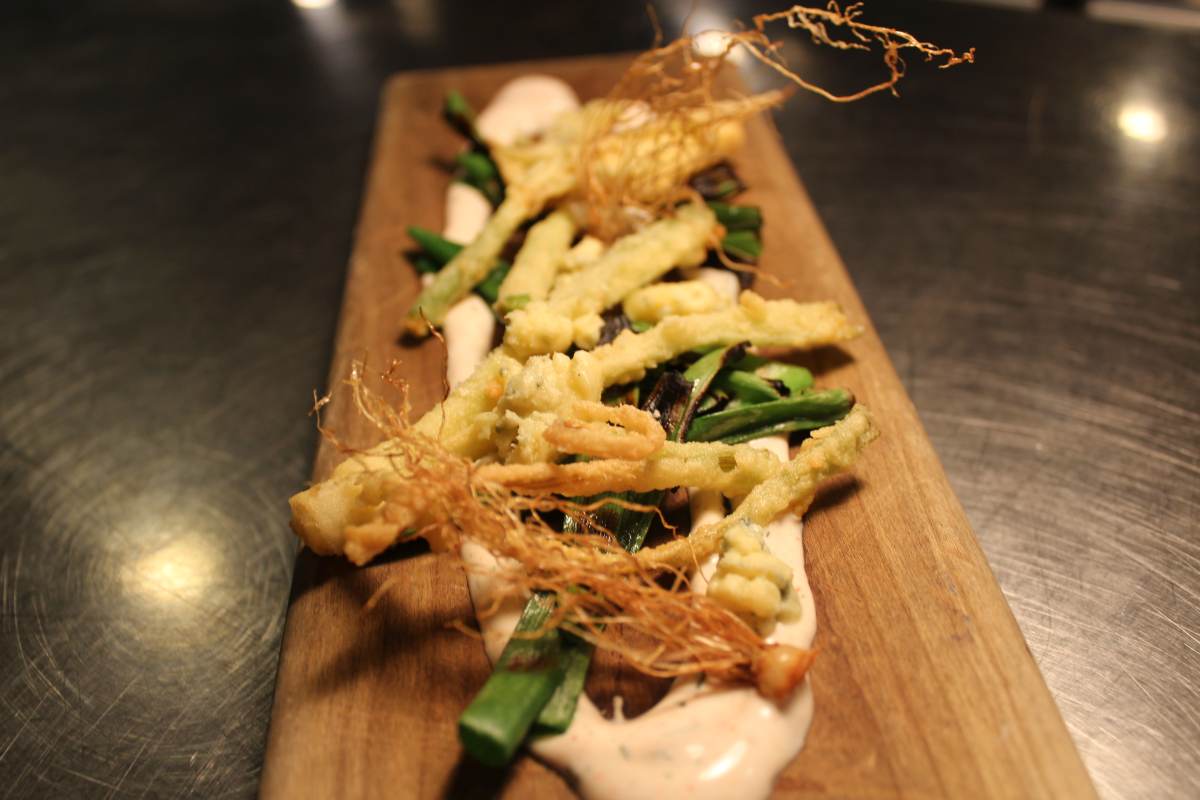 Roots to shoots—scallions that are grilled over high heat for the dark char, battered and fried whole scallions, including their roots, drizzled with ranch dressing and is served with a mild local blue cheese. 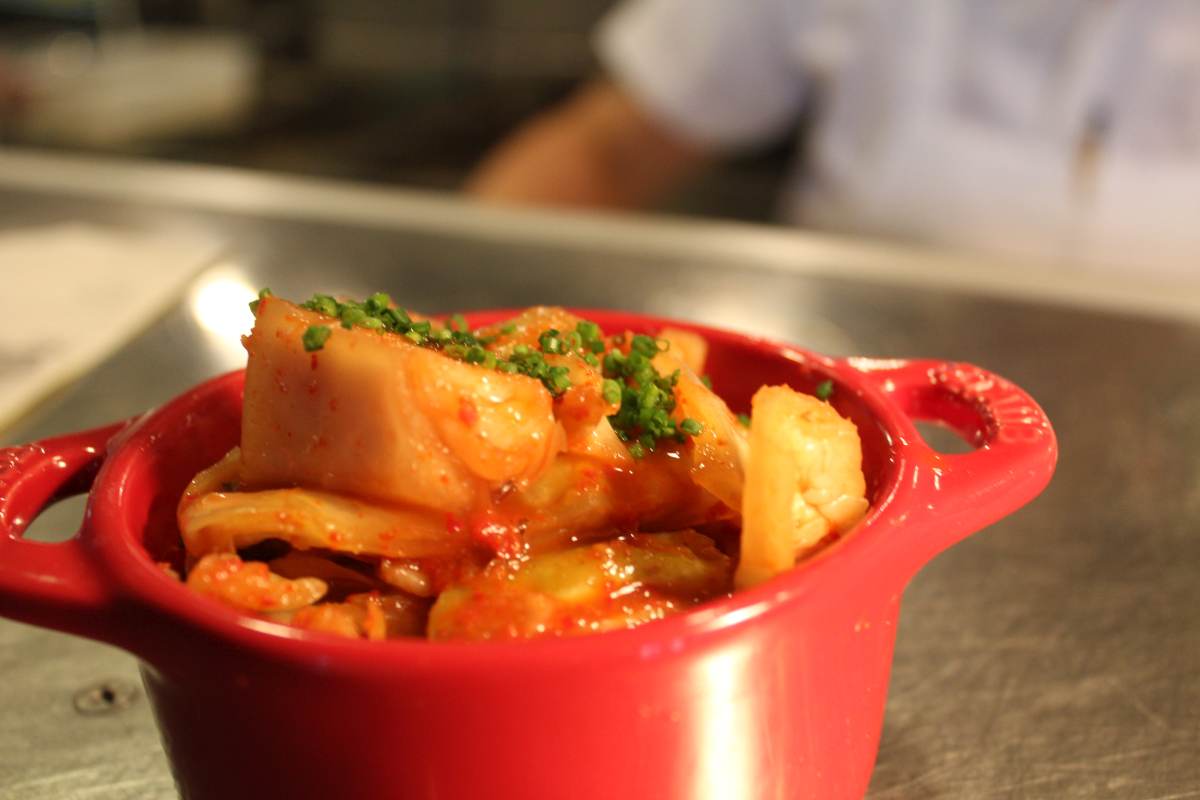 Moxy does a pretty good version of a quick kimchi—fermented cabbage. 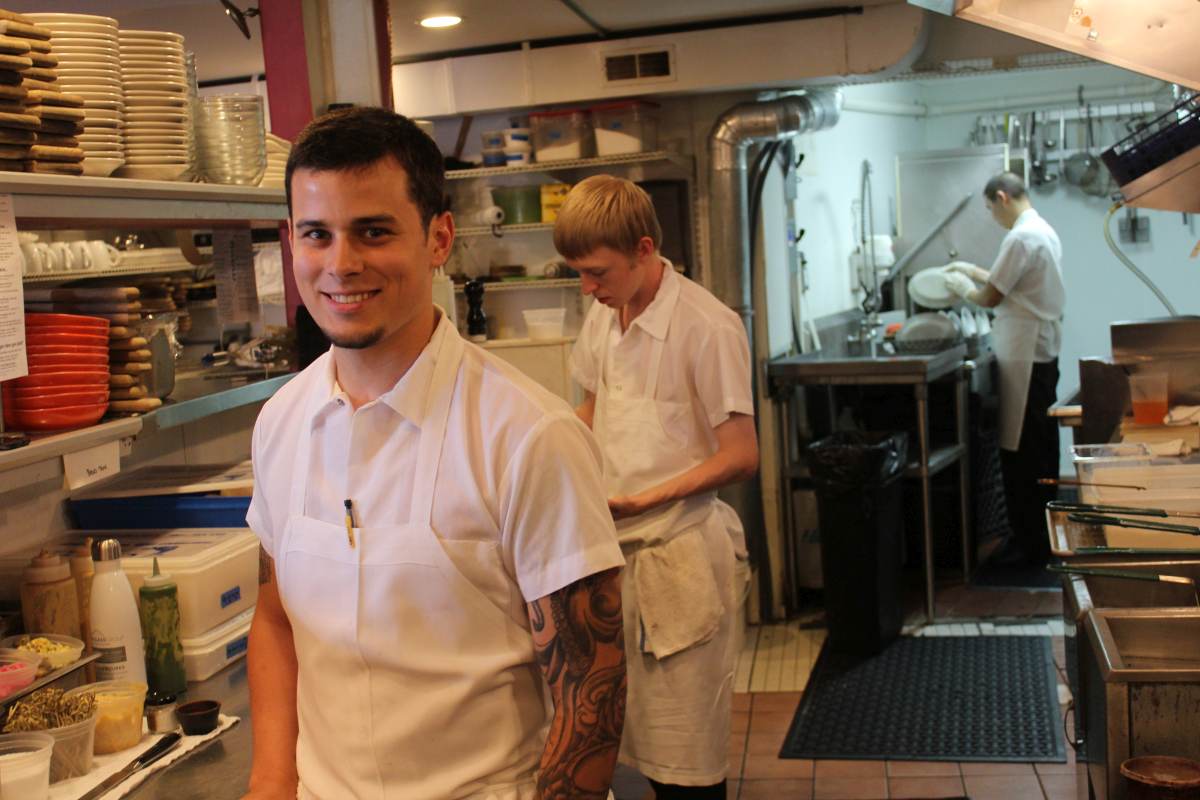 Chef de Cuisine Chris Cherim, is a not only a cool dude and a friend off mine, but a talented chef with cool tattoos. Here he is plotting how to make me work service. 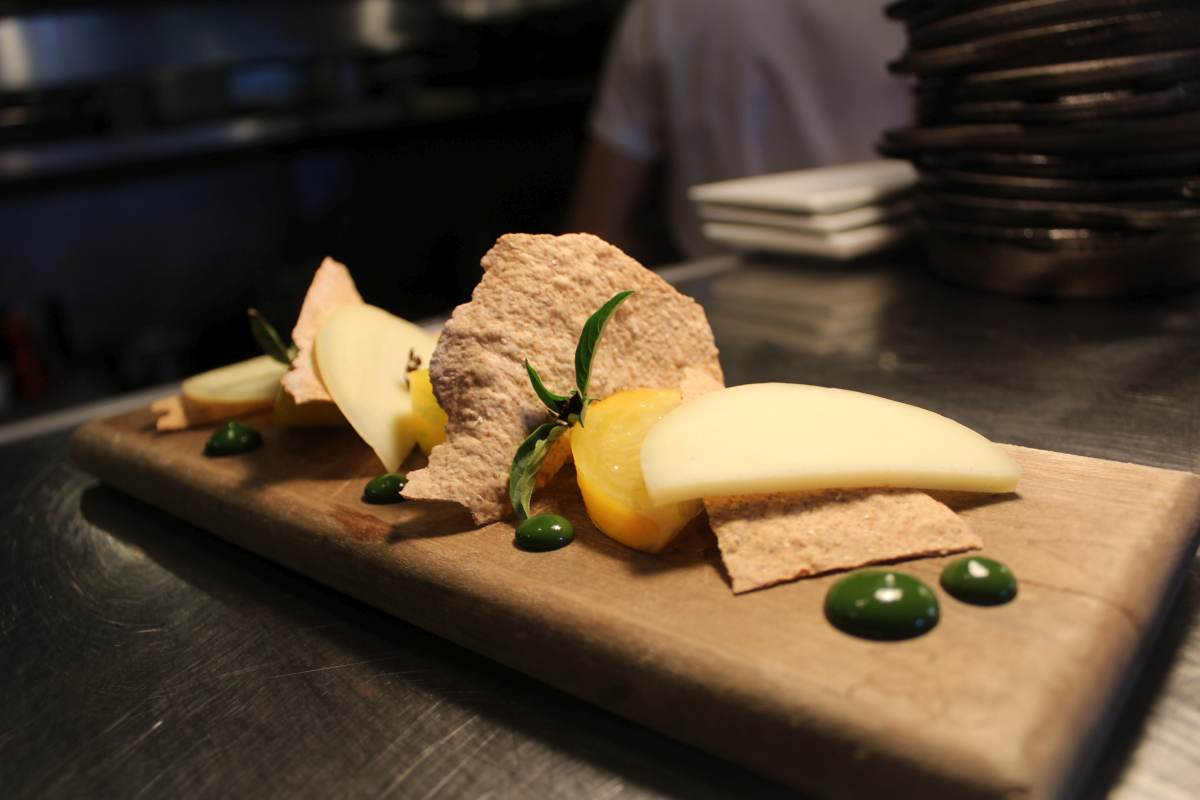 A nice take on a cheese and crackers, Moxy uses local scamorza cheese from Wolf Meadow Farm, and pairs it with rye crackers, heirloom tomatoes, and Thai basil. 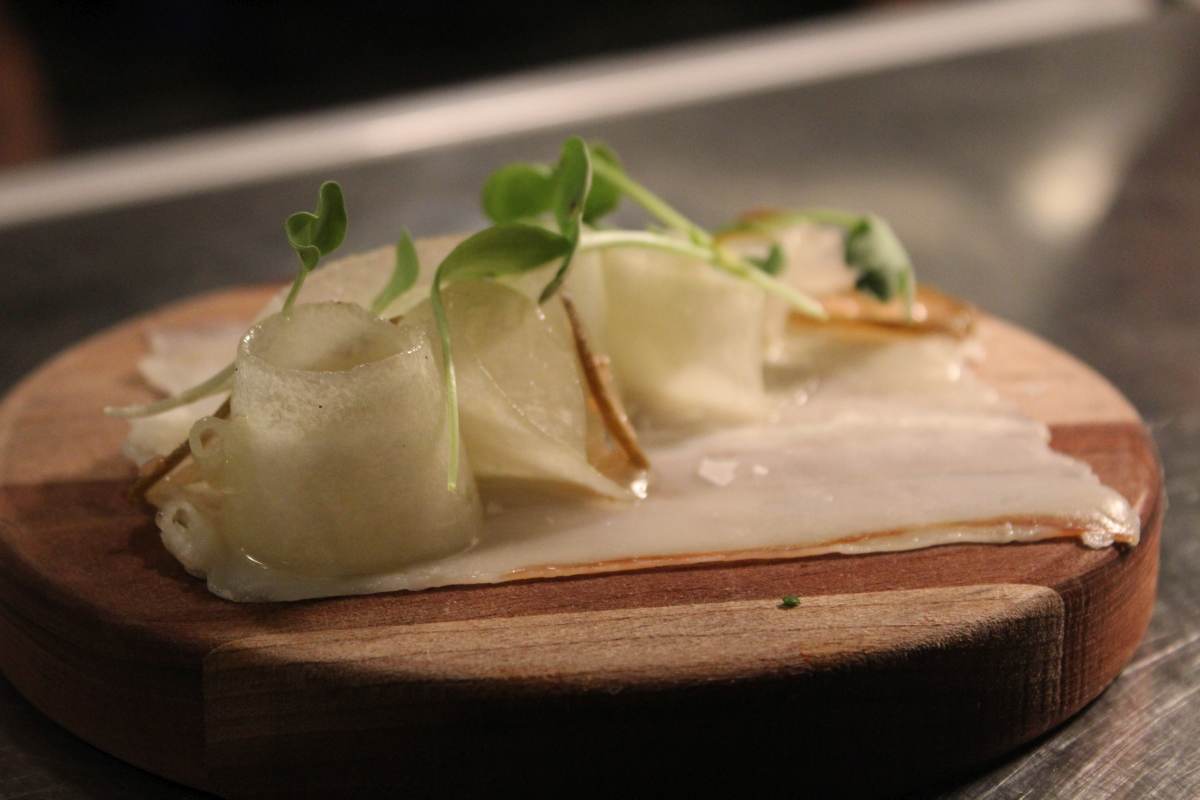 My favorite dish was the Lardo—pig fatback cured for eight months, sliced thin and served with fresh white honey melon, pickled unicorn (similar to okra, and brined for four weeks), and radish sprouts. 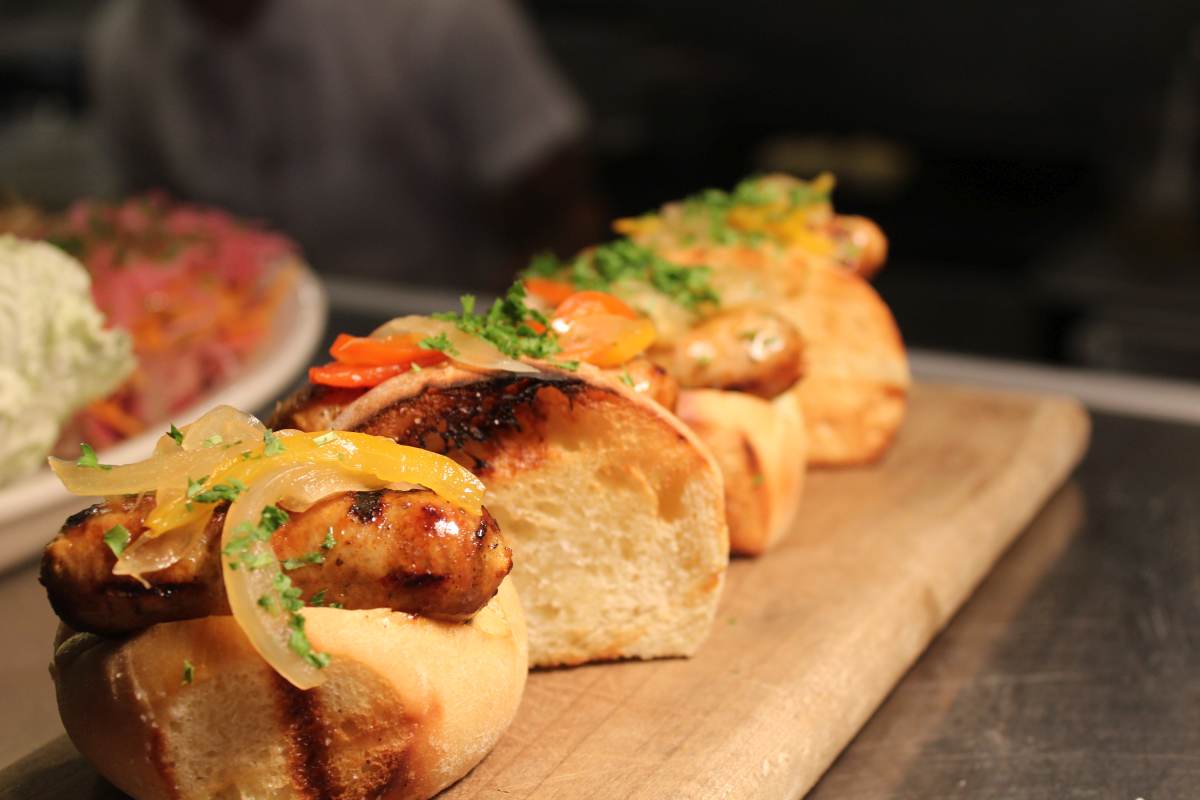 The hot dogs are made in-house and come served with whole grain mustard and topped with bacon marmalade. The hot dogs are first ground, frozen, and finely ground again, then puréed and seasoned After being tied, cased, and portioned, they are finally poached, cooled, and cut individually. On “pickup,” they’re thrown on the grill to get that authentic backyard summer char,

The Italian sausages gets topped with the ever-traditional peppers and onions, and are served with a white mustard that’s made just down the street and called “White Lightning.” 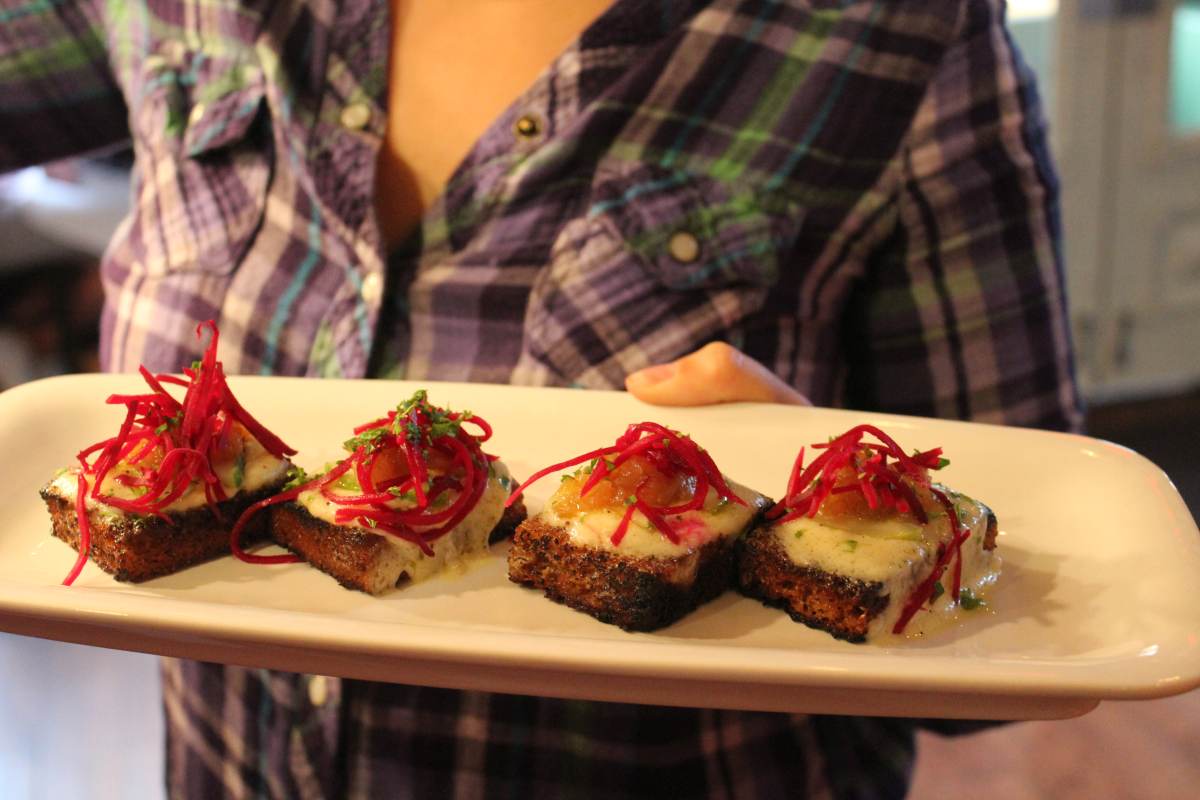 The “Portsmouth Rarebit” is unique, consisting of anadama bread, beer cheese, caramelized onion, marinated cukes, and pickled beets, it was a really cool New England variation of the Welsh Rabbit. 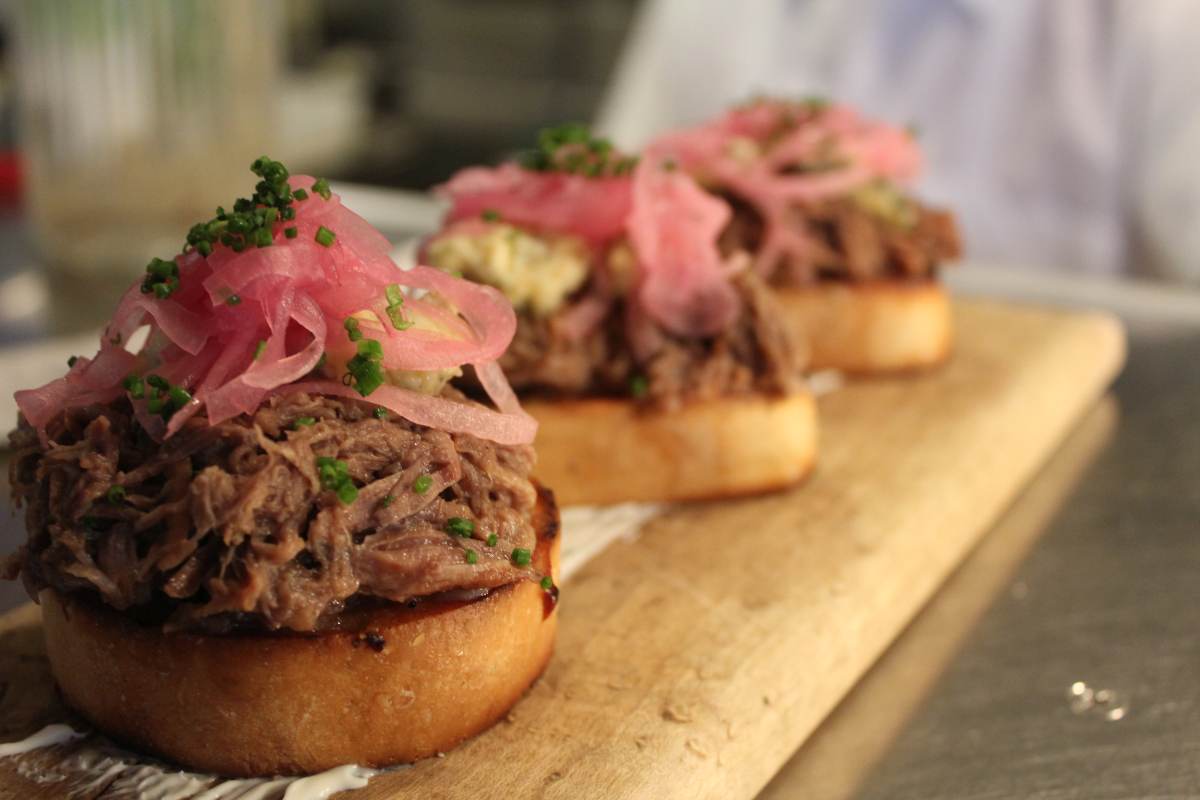 Probably the most popular on the menu and a staple of the restaurant, the Beef Short Rib Marmalade is mind-blowingly good. The braised is heated in a seasoned jus and mounded on grilled bread, with local crumbles of a mild blue cheese, and pickled red onion. 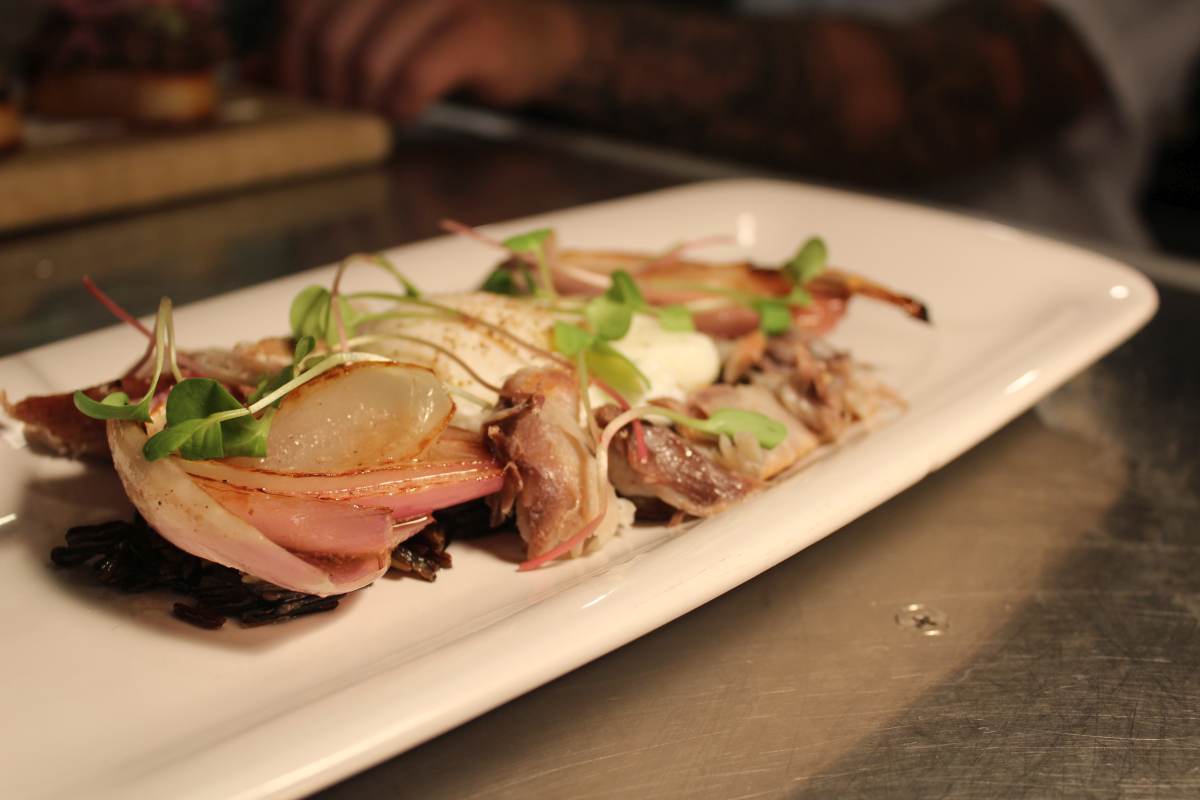 Moxy’s play on a Western-style Kedgeree—traditionally a smoked fish served alongside a hard boiled chopped egg and rice—is made with smoked bluefish, charred onions, wild rice, and a fried egg. 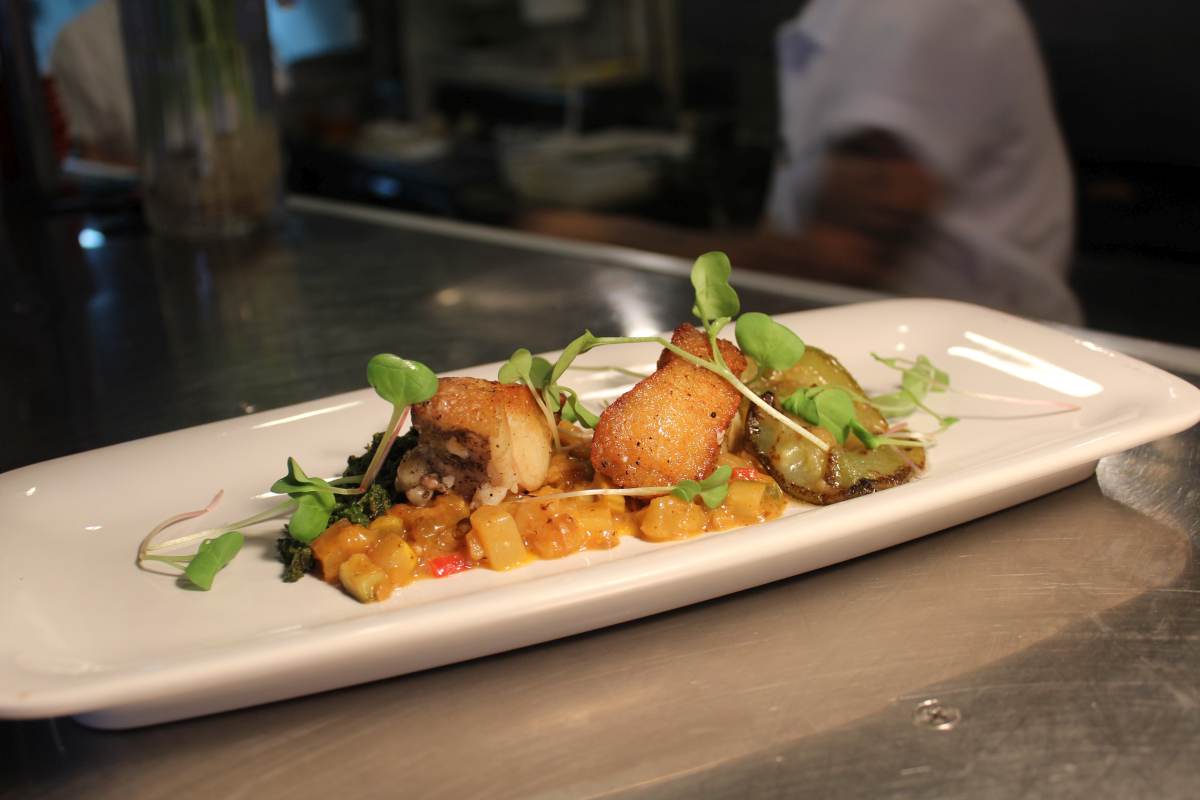 The monkfish is pan-roasted and served alongside sautéed tomatillos and a summer vegetable succotash. Green crab stock boosts flavor. 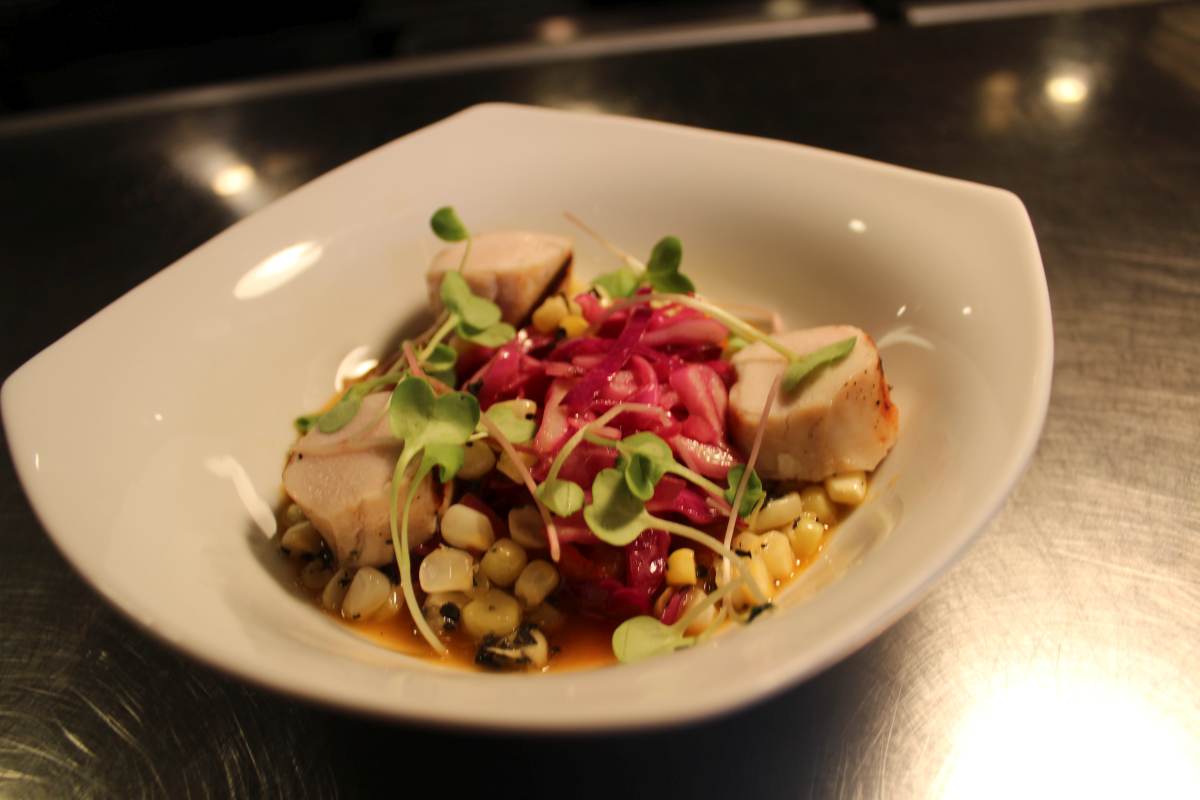 Chef Matt always gets in fresh rabbit whenever it is available. I remember having to wait a day or two to break it down as it was still in rigor mortis and if touched in any way would be tough and chewy. Here is grilled rabbit loin, with charred red cabbage, roasted corn, and “herbes de Penhallow,” which were herbes de Provence grown right in the Moxy garden. 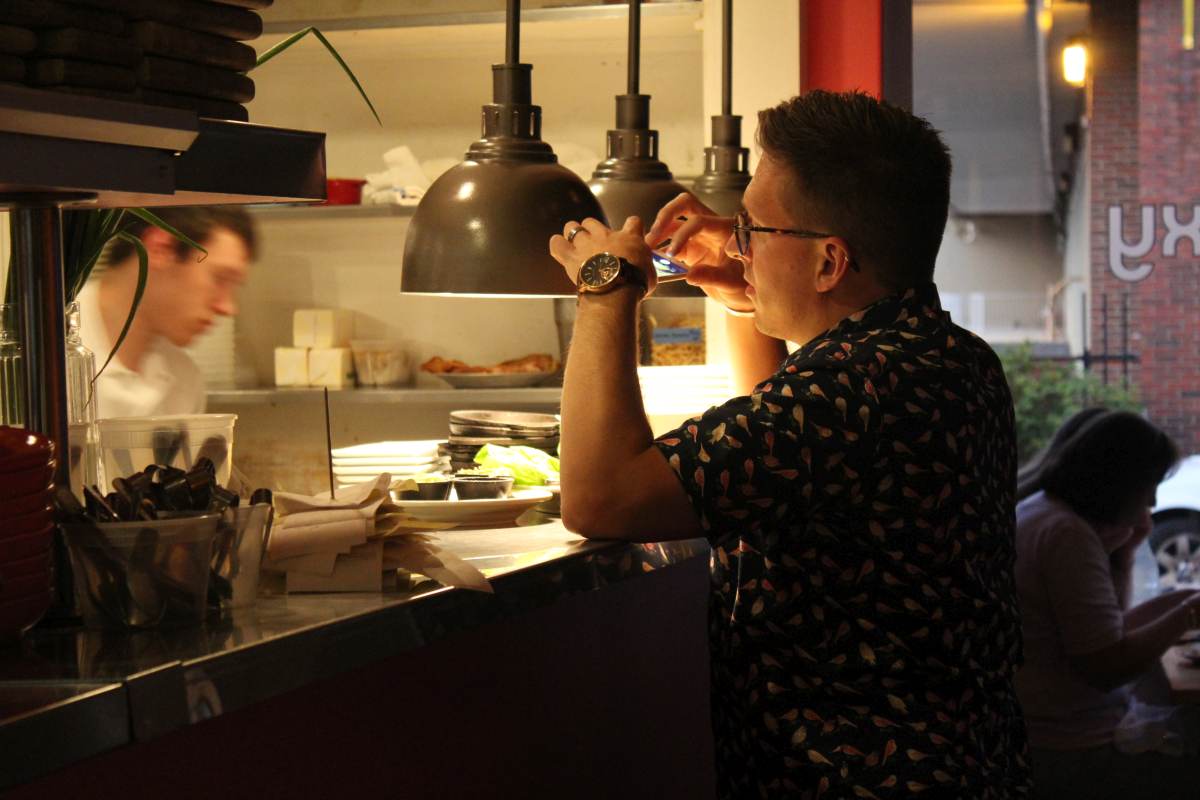 Here’s the GM, Owen, instagramming like the boss that he is. 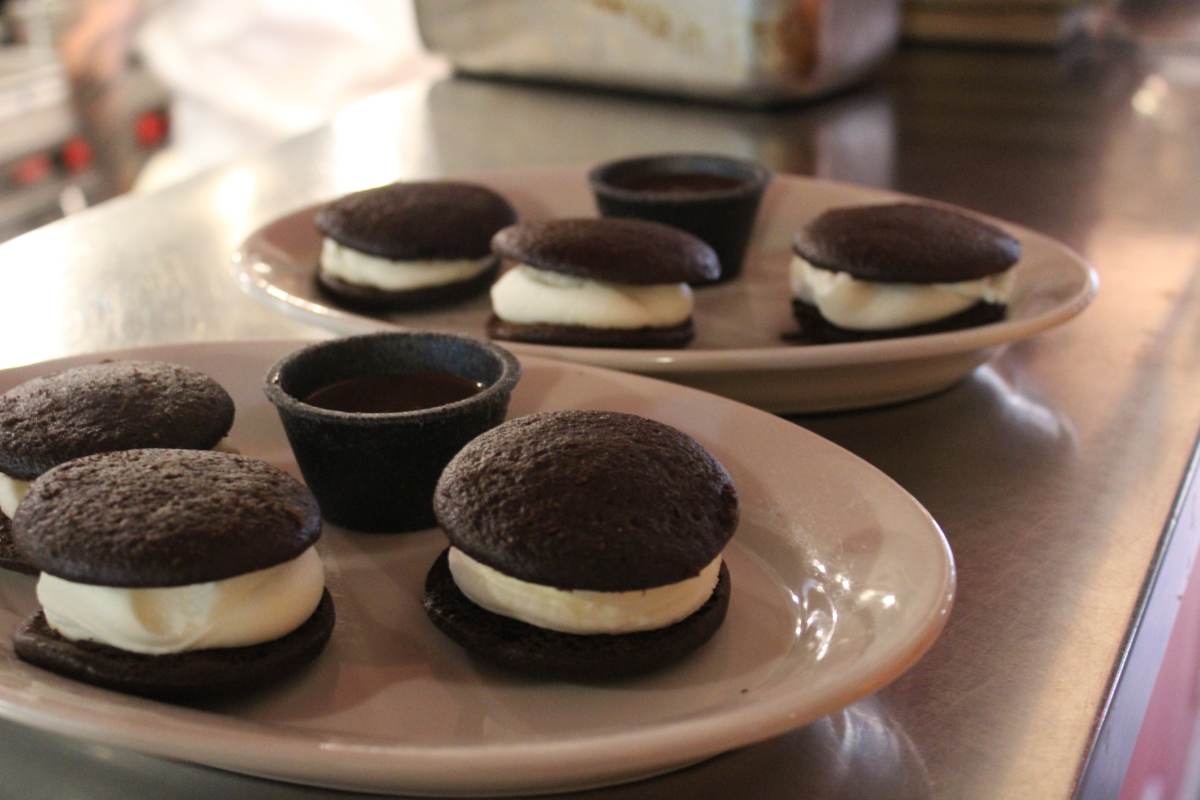 Probably one of the most well-known dishes on the menu, the whoopie pies, is the best dessert on the planet.

Moxy is a very special place, a very cool restaurant, and it’s always a great time to hang out and eat a lot. After finishing up at Moxy, I swung down to the other place that’s also run by Matt Louis, known as the Franklin Oyster House. I used to shuck oysters here, and by the end of the summer I had a pretty deep appreciation for the little guys. Like the beans in coffee or the grapes in wine, each oyster has a different flavor based on their terroir.

Chef Matt and the team there had worked closely with a local oyster farm, eventually creating their own, ultra-local oyster to serve exclusively at the restaurant.

I had a great night hanging with the crews at both restaurants, and it was just too much fun to be back. Big thanks to everyone for letting me hang out, especially GM Owen for letting me crash!