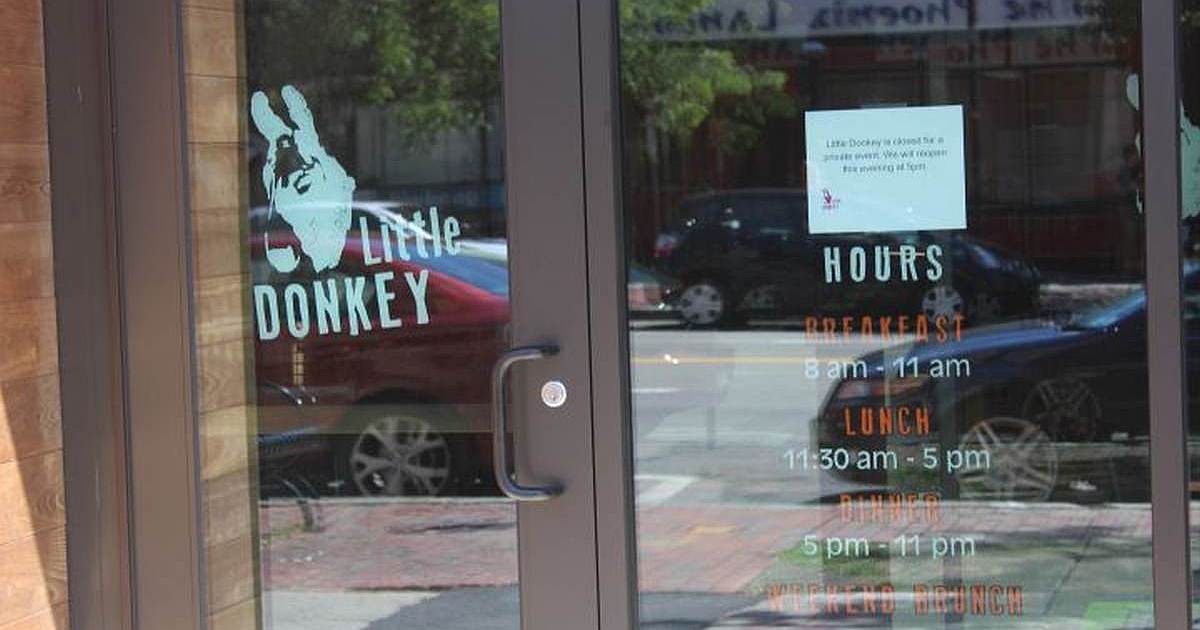 Little Donkey is the newest joint venture from well-known Boston chefs and restaurateurs Jamie Bissonnette and #CIAGrad Ken Oringer ’89. Located in Central Square, right in Cambridge, MA—where I was born, homies—the restaurant is a global tapas hotspot that does at least 200 covers each night. I had heard good things about it from my friends and I just had to get in there.

I found parking there earlier than expected and had time to kill, so like any tourist I walked around and did nothing in particular.

There’s a really cool graffiti section that’s worth checking out. 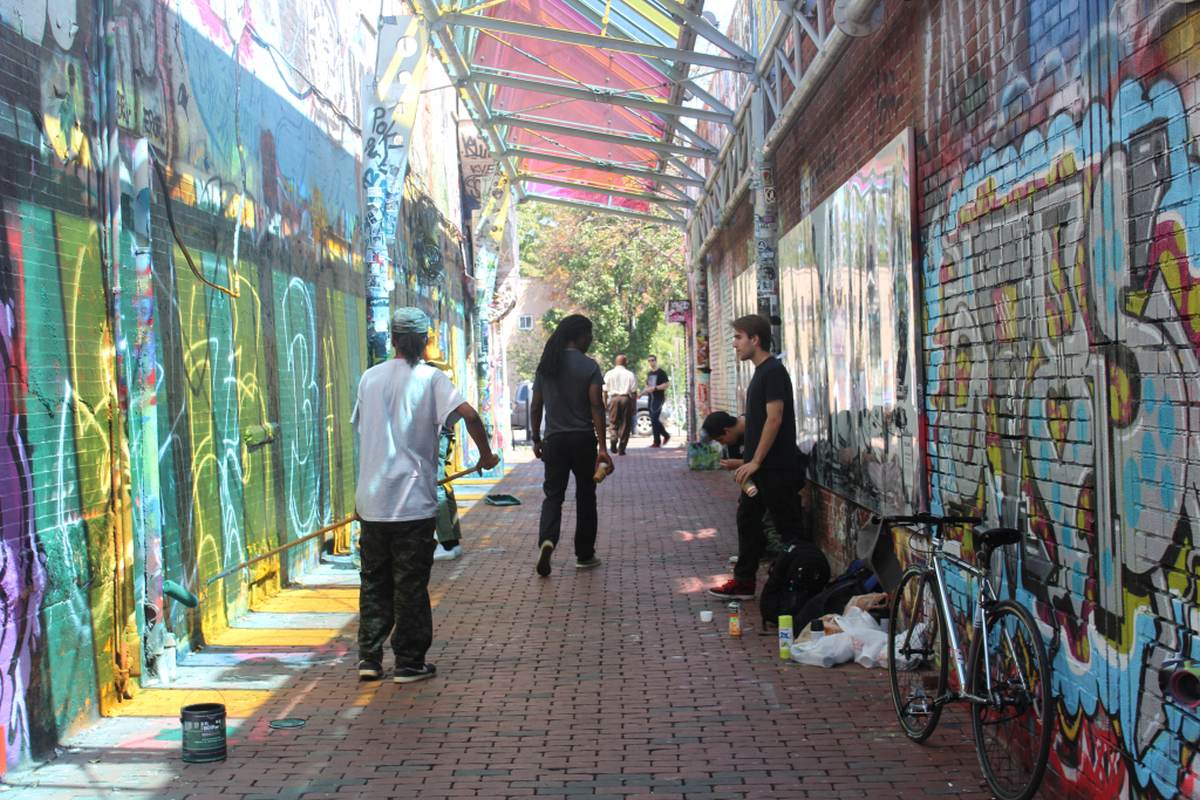 There’s also Craigie on Main down the street, which is consistently one of the best dining spots in Boston. 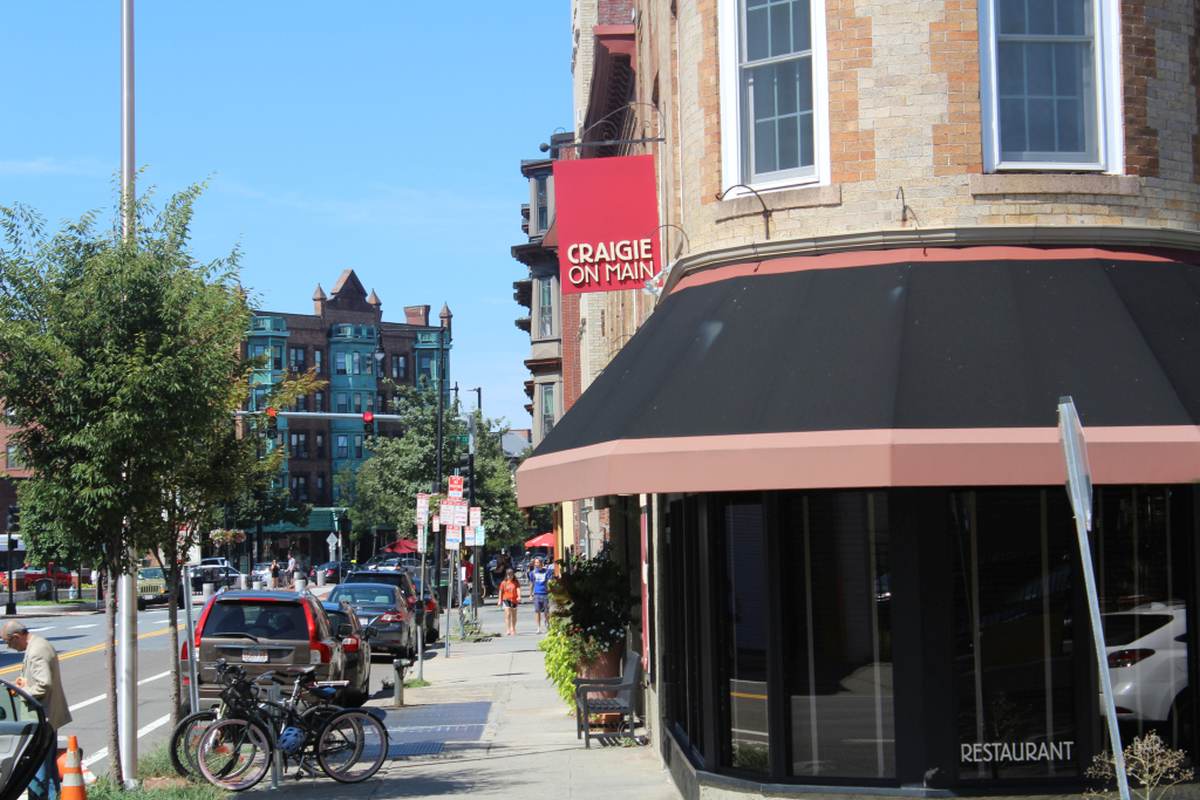 Another place I recognized was Toscanini’s, which has some of the city’s best ice cream. More on that later. 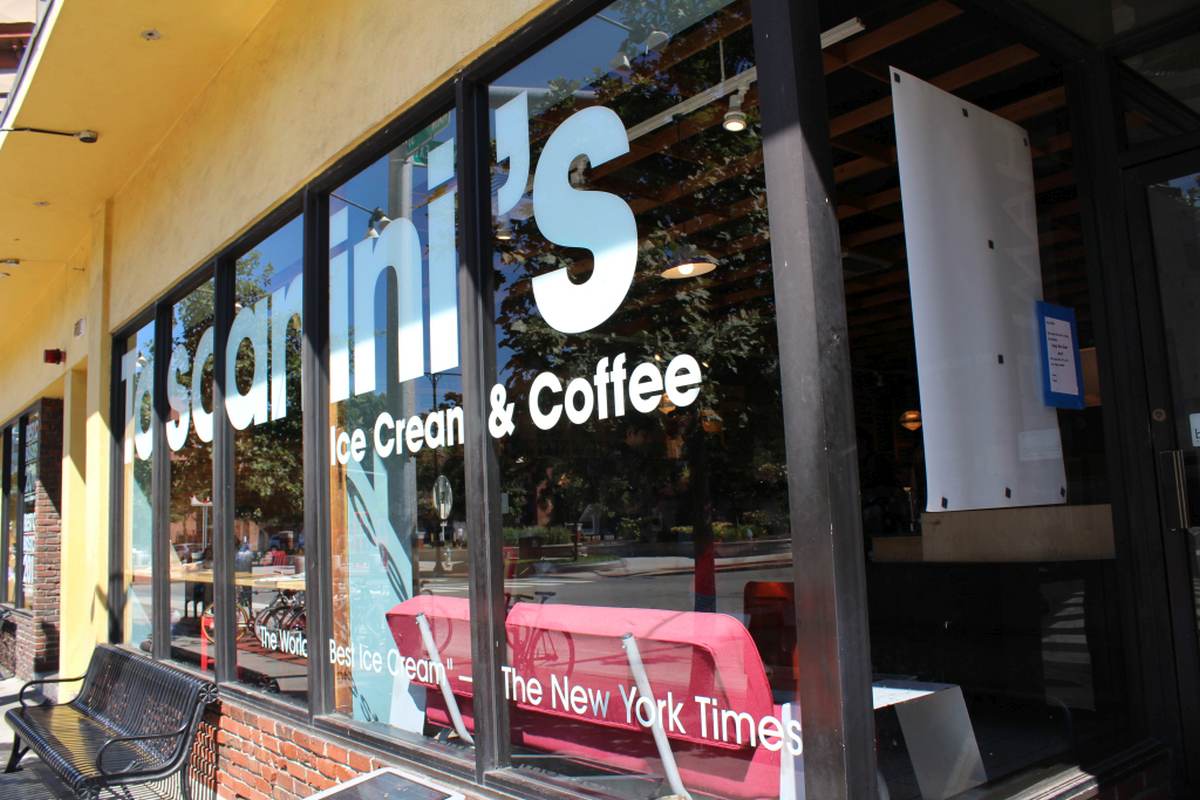 Soon, it was time for my stage. I walked in and was instantly greeted by the Chef de Cuisine Trevor Smith ’02 (the guy in the middle). 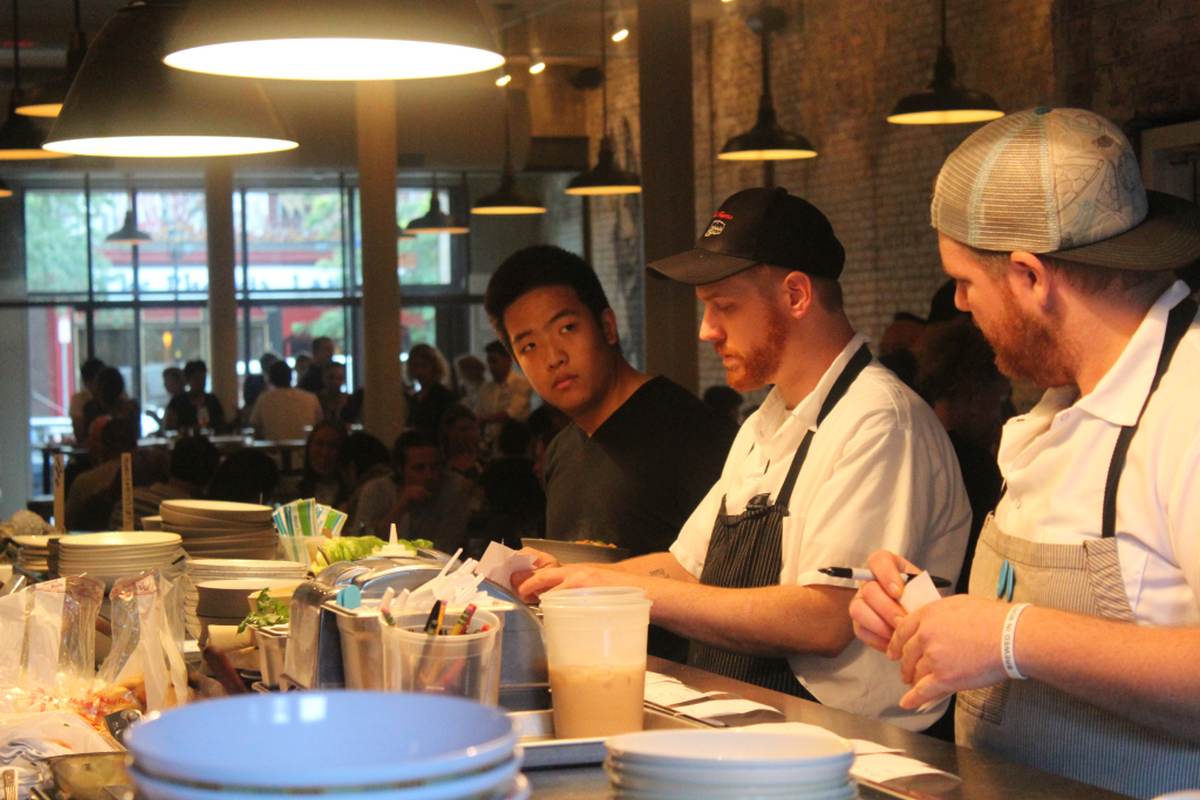 He’s a CIA grad and we talked about school (Chef John Reilly ’88, we both love you), our past experiences, and what brought us to Boston. He had spent time at Gramercy Tavern in NYC, in Europe, and finally ended up in Boston. His wife is actually the current chef de cuisine at Toro, which is pretty amazing to me. I had the opportunity to eat there last year with some friends and all I can say is, “uni bocadillo.”

We talked at length about the terroir of New England and the uniqueness of the cuisine. He explained that because of the volume that Little Donkey does, it’s very hard to buy ultra-local. This is due to lack of storage space and the inability to place orders frequently with local farmers. They do what they can though, and work with some really great local and seasonal ingredients.

Little Donkey had other ways of sharing the uniqueness of the area’s cuisine with the diners that came through the door. When you first look at the menu at Little Donkey, it may seem a bit random. However, as you walk through Central Square after dinner, you see Indian markets, where the monkfish biryani on the menu comes into play. You see Korean grocery stores that inspire the Asian-influenced dishes at Lucky Donkey. You walk a block down and see Toscanini’s, where the green tea ice cream is made for the profiterole dessert. It’s really cool, and it all kind of makes sense.

Chef Smith took me down to grab a shirt and apron, and I headed to the kitchen. There’s a sauté station, fry station, wok station, plancha station, and a raw bar on the top right corner, and a two-man garde manger station. 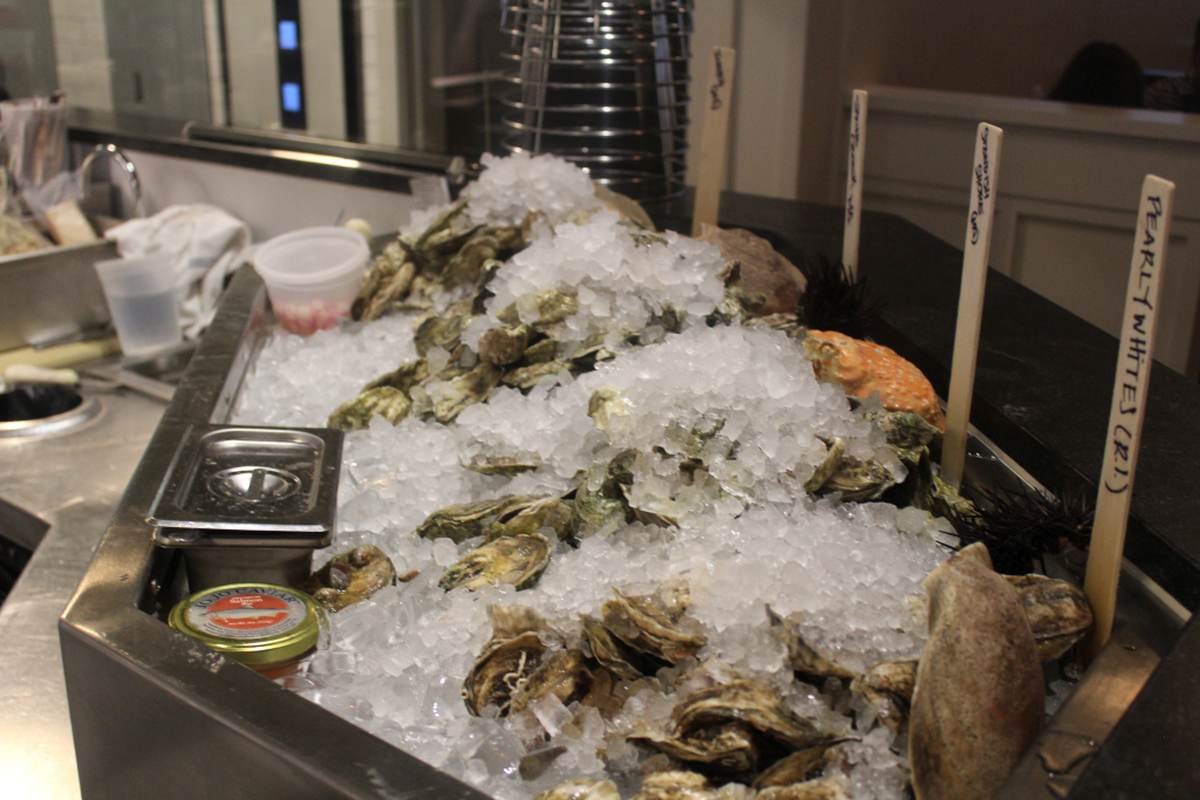 I didn’t want to stand there and take pictures and be in the way all day, so I helped with various knife work and easy prep to lend a hand. I julienned some ginger, made a brine, and chopped some garlic.

I got to work with these little suckers too, removing the outer layer to leave a finished product like the one on the left. Percebes, or gooseneck barnacles, are really fricken cool. They are briny, sweet, and you just kind of grab them with your teeth and eat them as a little snack. They’re often found on the Iberian Peninsula. Closer to the U.S. they’re found in the Pacific Northwest. They’re wicked expensive and can go for up to $115 per pound in some areas. Here, they are served with a side of Old Bay sauce. 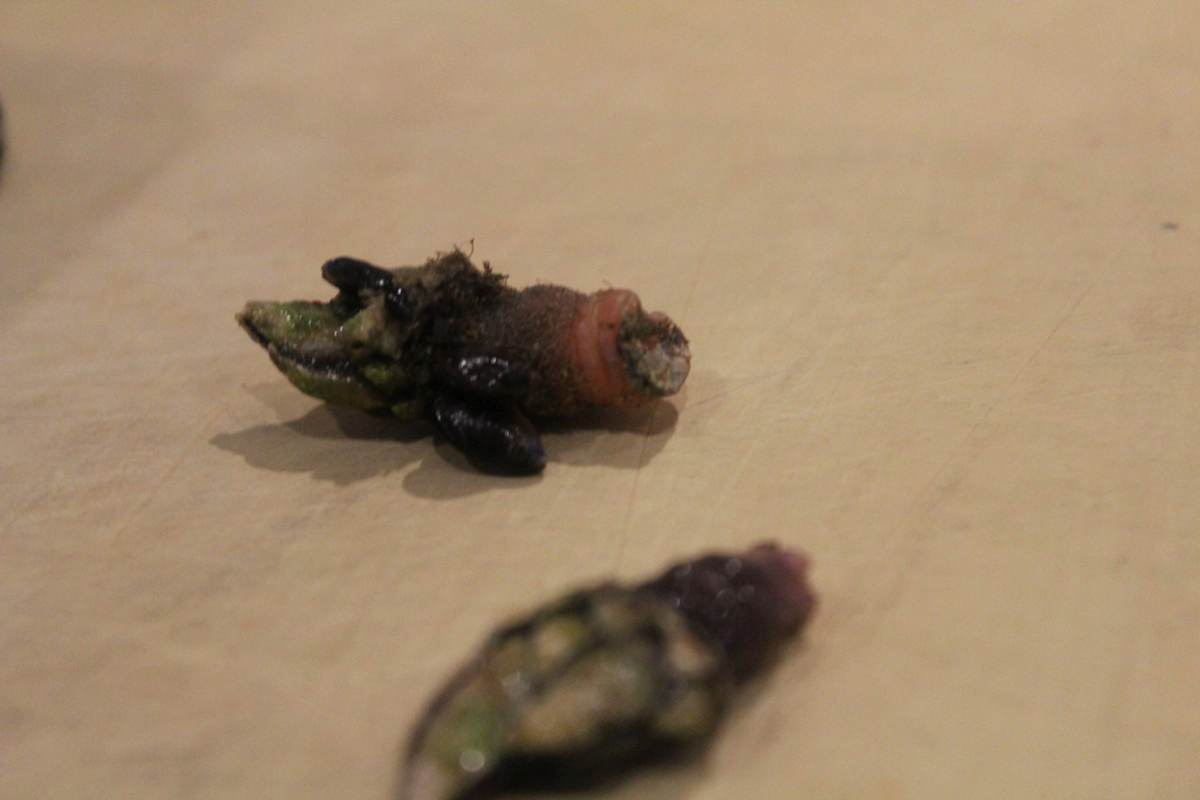 When service starts, garde manger gets hit right out the gate. This guy is a NECI student, and he did a really good job all night. Here, he’s making the avocado dish, which is seared a la plancha and gets finished with pomegranate molasses, pepitas, yogurt, and flowers, because flowers make everything great. 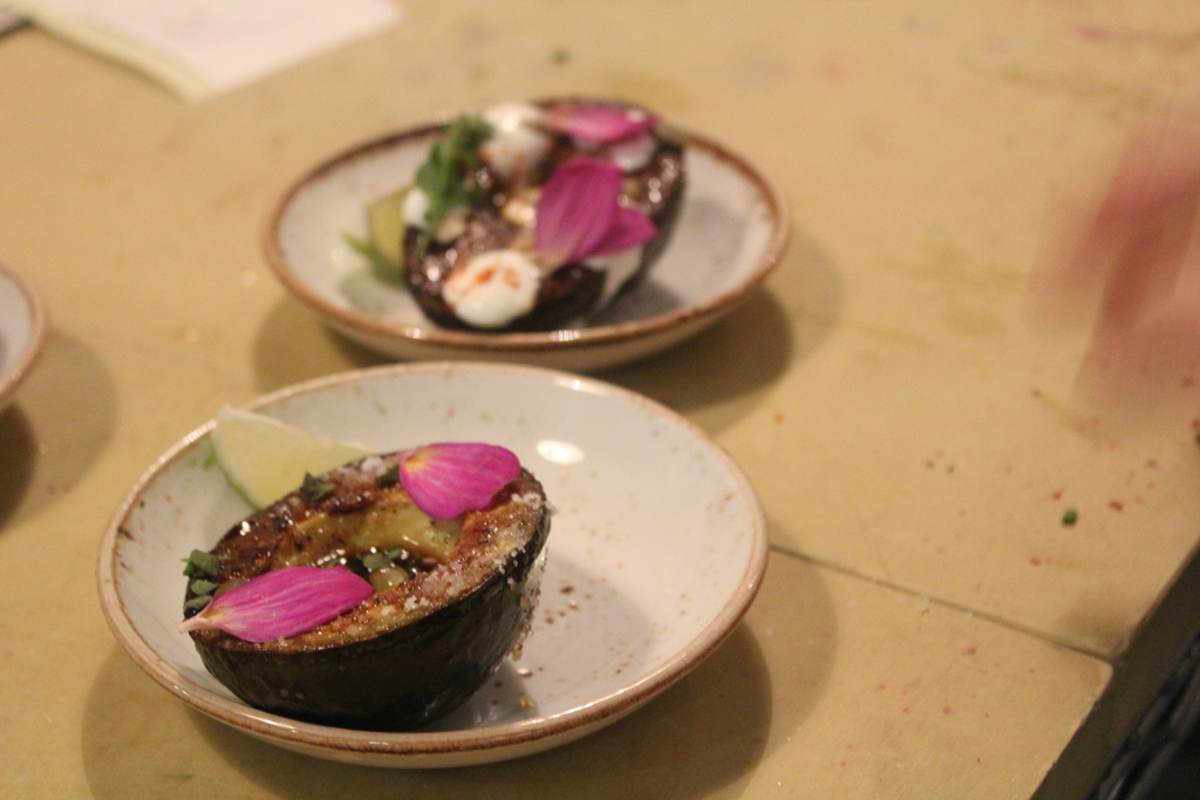 Another popular dish was the hummus, served with beets and tahini. 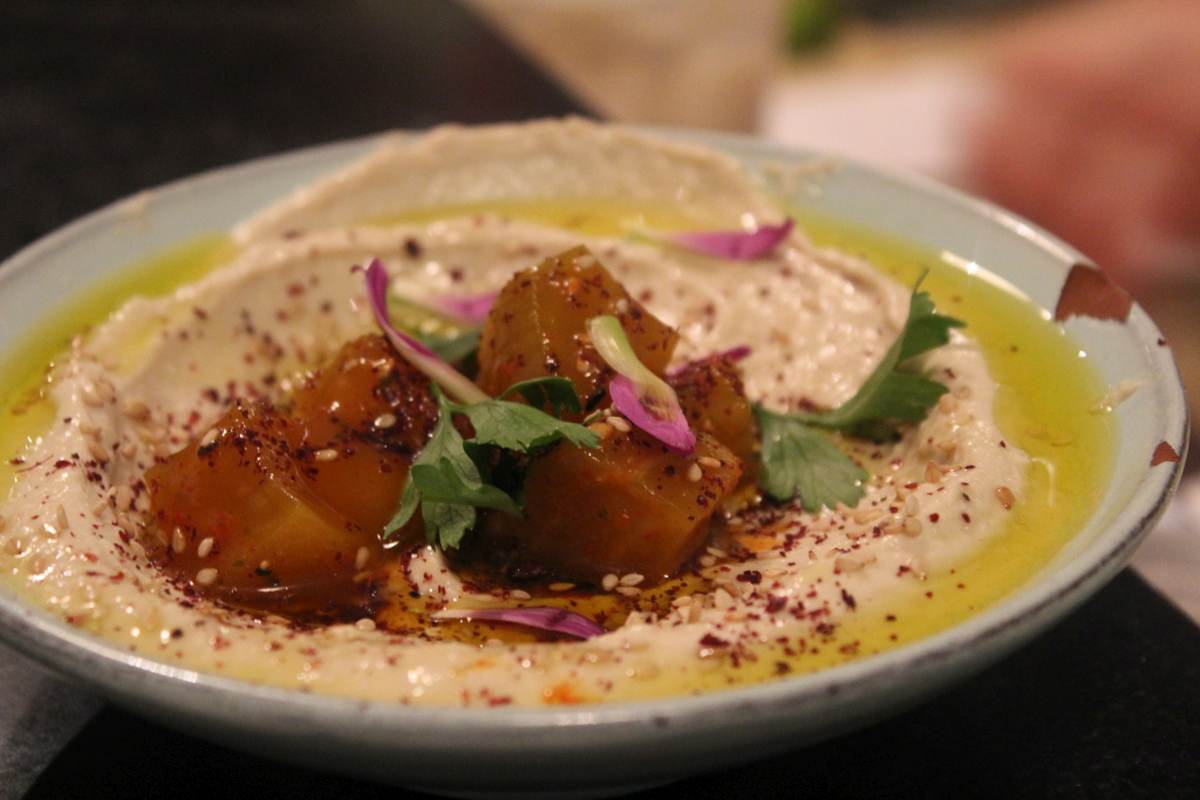 The cucumbers that I watched one of the prep cooks roll earlier became a beautiful salad with buttermilk, peppers, and feta. 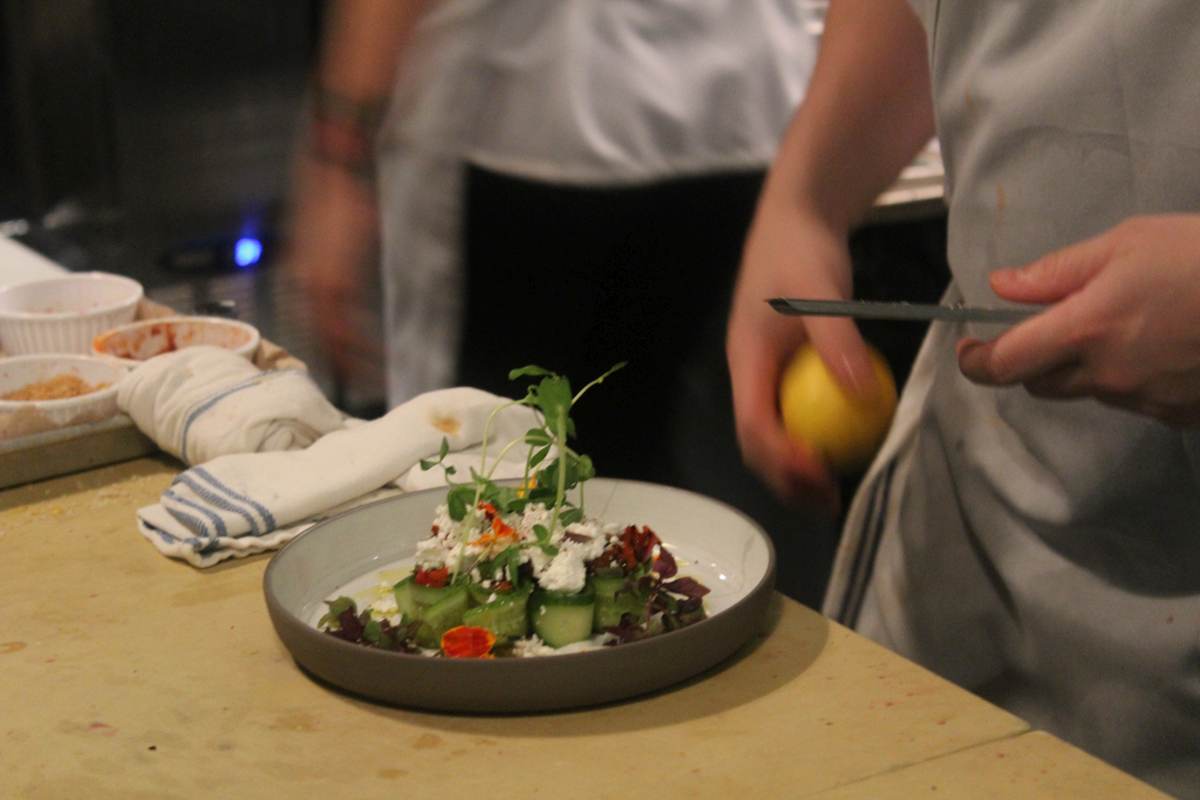 There was a tomato dish, and that made me happy because fresh heirlooms are some of the best things on the planet. 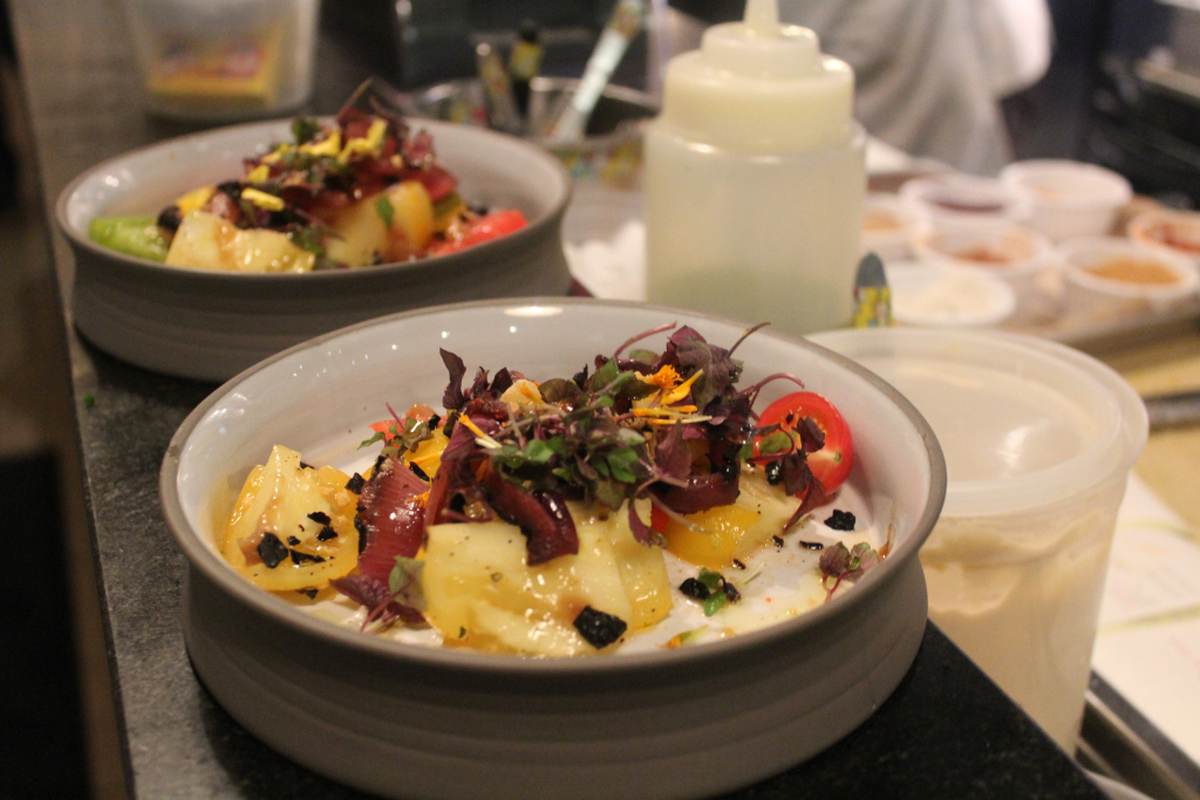 There was also a really cool tartare dish, served with black pepper popovers that are made with beef fat. 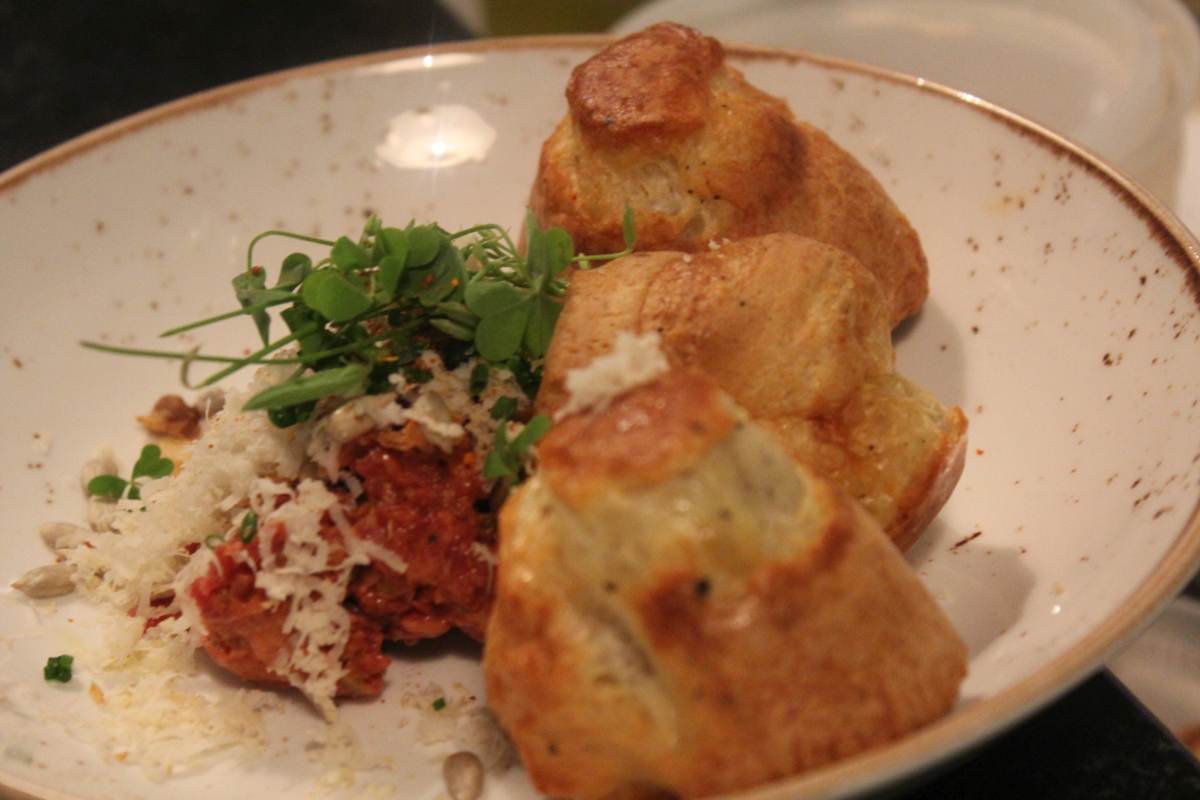 After hanging out at garde manger for a bit, I made my way down to the sauté station.

There’s a lobster Fra diavolo on the menu and a matzo ball soup—so I can bring my grandma here. It’s a ramen variant, with corn, chicken, and a soft boiled egg. 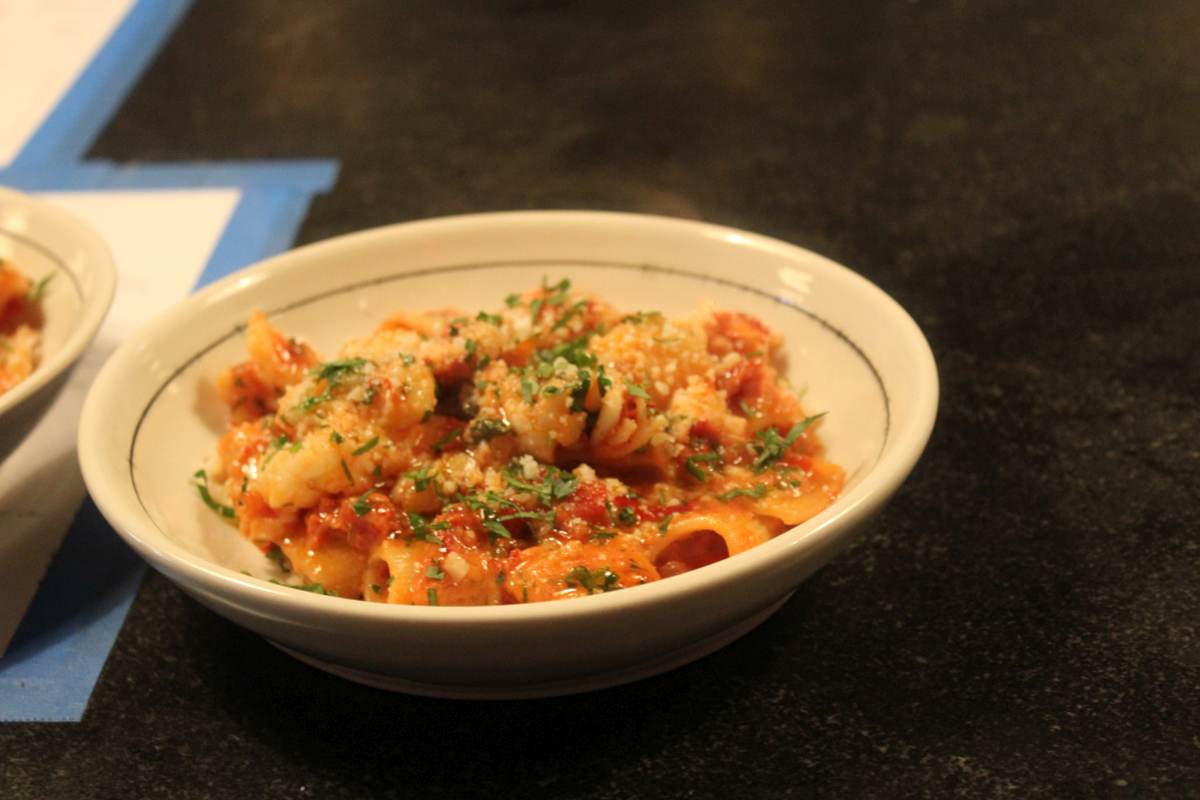 Turkish ravioli, called Monti, make an appearance on the menu. Anyone who’s eaten in Meds at the CIA can probably tell you, when made right, they’re really good, and these are made right.

Wok station was getting some action, and for good reason. It’s such an underutilized piece of equipment, and can crank out some really, really good food. Little Donkey’s Chow Fun noodles are really rich and intense, with the super thin and flat noodles becoming an umami-bomb vessel for the snails, the mushrooms, green curry, and Calabrian chili oil. It’s finished with black bean paste which both rounds the dish out and pays homage to its Asian roots. It was one of my favorite menu items of the night for sure.

The wok station also was responsible for the fried chicken sandwich. I had made the brine earlier, and it’s always cool to see the dish that you help prep come to life. It’s double fried and served with a papaya slaw, avocado ranch, and jalapeños. Really crunchy, juicy, and I could have eaten about fourteen of them. 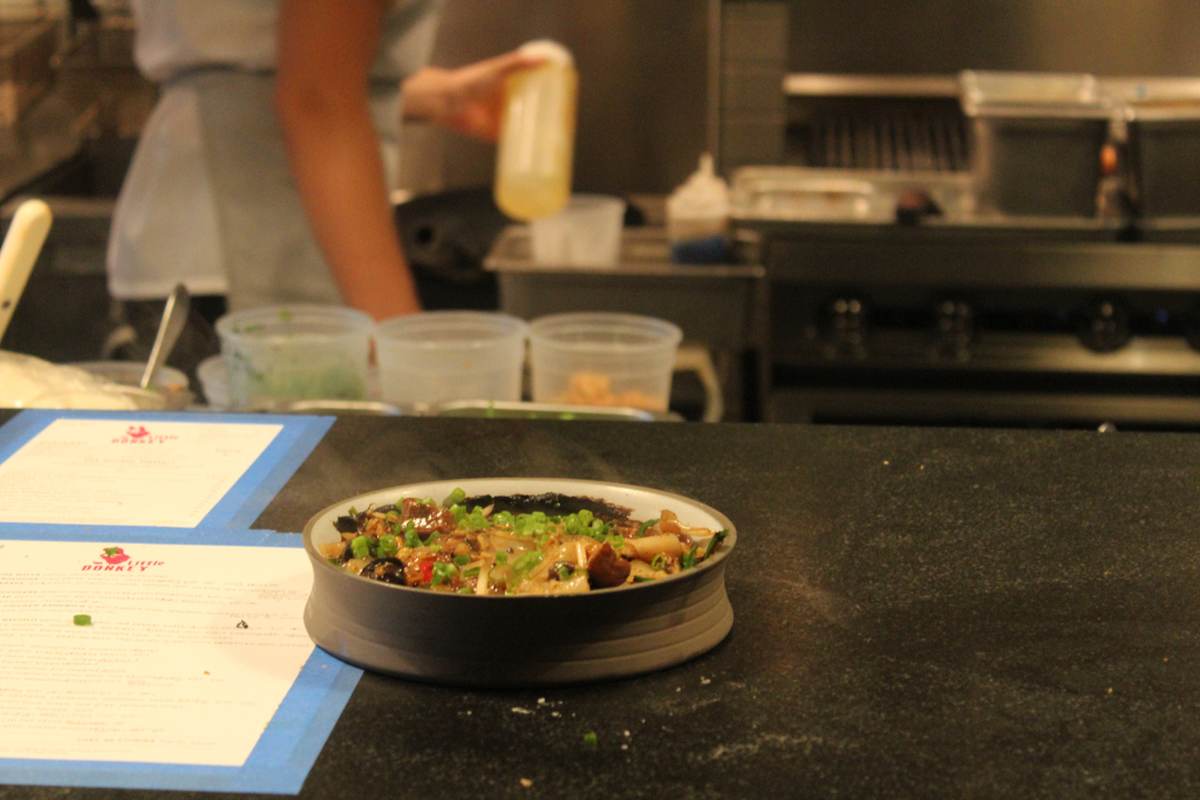 I wanted to see the plancha station in action, so that was where I made my way next. This station was responsible for a lot, so it was a pretty cool station to watch. 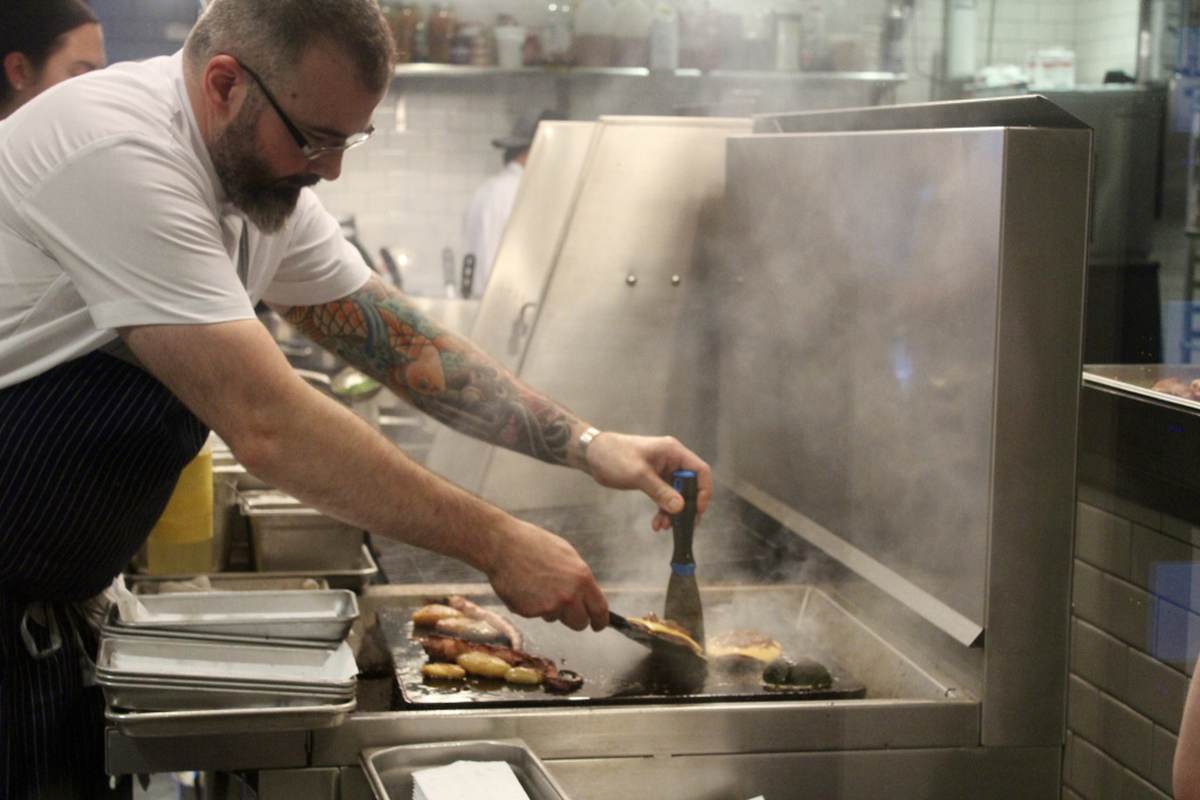 There was an octopus dish. I later helped portion out a batch and I guess you could say it doesn’t suck. Hah. Sorry. The cephalopod is braised, seared, and served with potato tostones and charred onion vinaigrette. 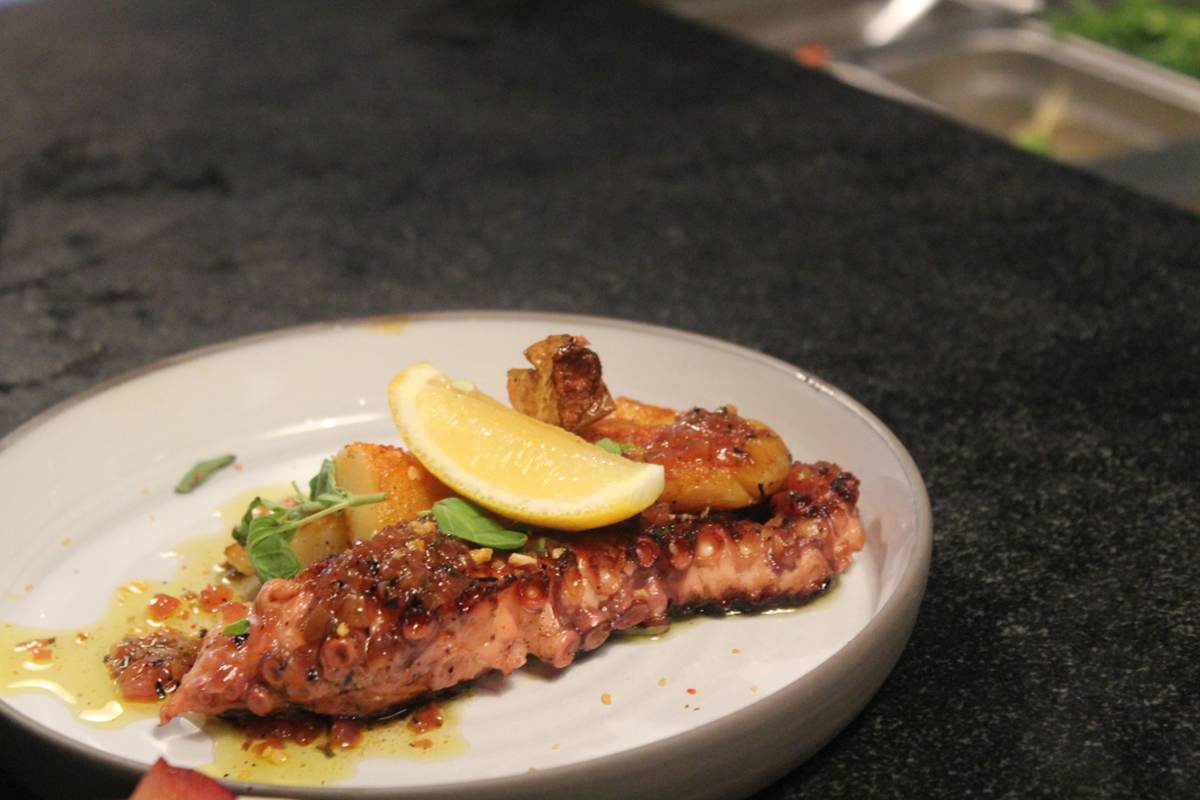 I had seen a lot, but there’s always room for dessert, right? I only took a picture of one or two desserts, but they have a pretty good assortment. They don’t have a pastry kitchen space, but they managed to crank out these really amazing profiteroles filled with green tea ice cream, covered in chocolate and finished with Pocky Matcha.

There’s always a sense of whimsy at the Jamie Bissonnette and Ken Oringer restaurants. I saw this best in their cookie dough dessert. It’s made with pasteurized yolks, so it’s all good to eat, and I ate a lot of it. Points for presentation, man. 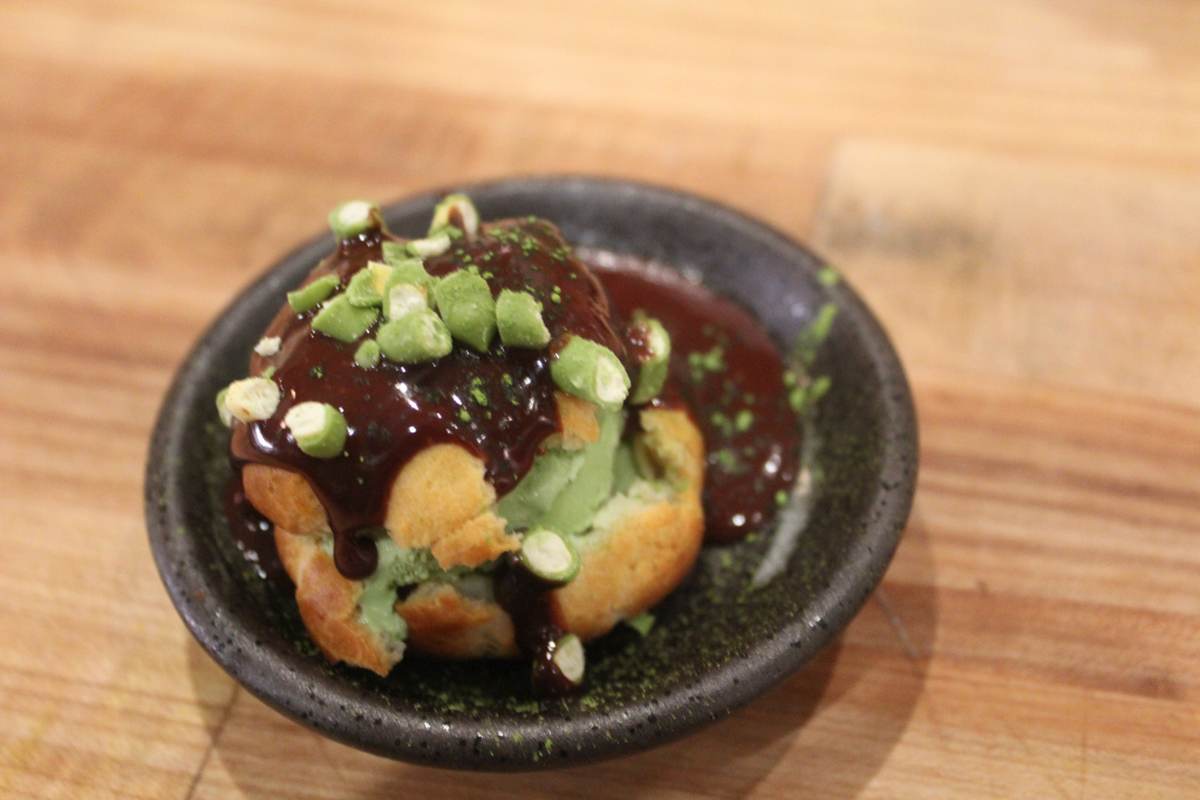 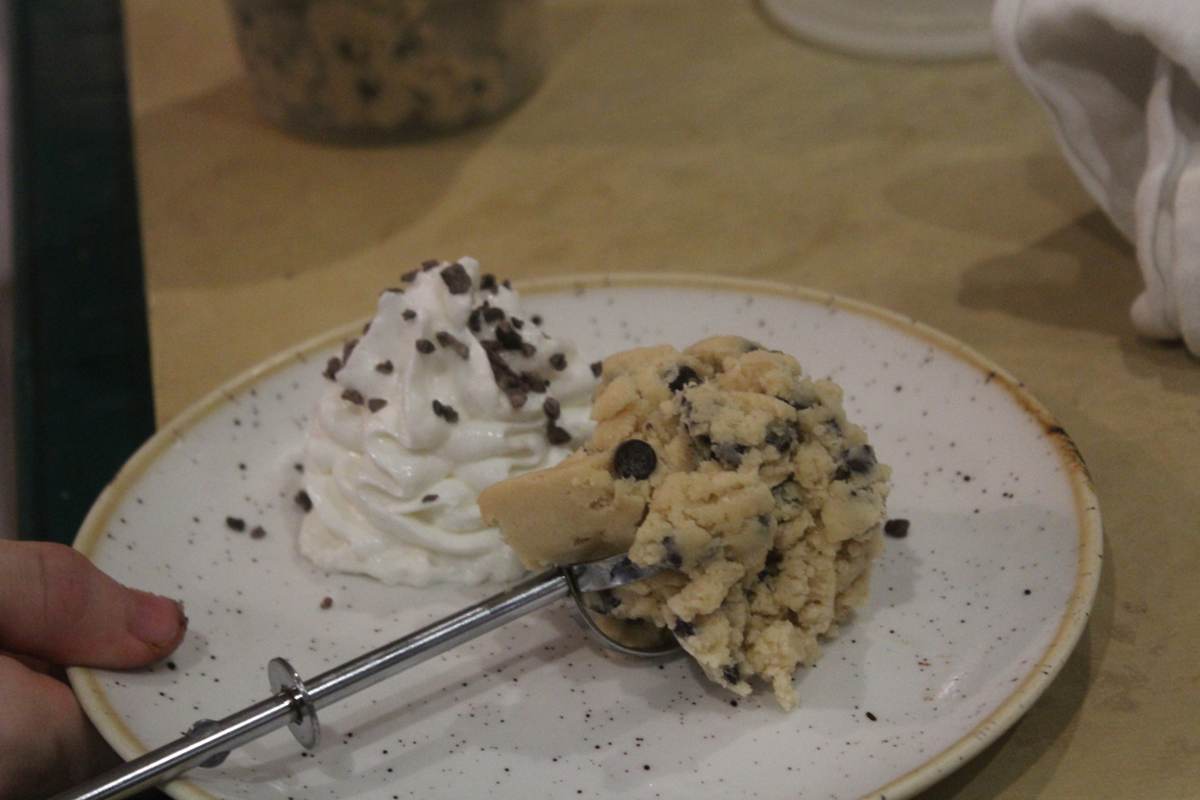 I had spotted Ken Oringer earlier. For those of you who don’t know him, I have no qualms saying he is one of the most talented chefs in the country. He was one of the first Americans to go to Feran Adrià’s El Bulli in 2000, even before Grant Achatz. He is one of the chefs I very much admire. He ran Clio in town for years, but he recently closed it down to focus on other projects, and I regret never being able to go there. It was amazing to be in the same kitchen that day.

His business partner, Jamie Bissonnette, was there during service. I’ve been following him for a while and it was really cool to not only see him in person, but to have a conversation with him about Pittsburgh, other places in Boston, and school, and do some prep with him. He’s a wicked nice guy, as you can see in the way he interacts with everyone.

Little Donkey has dinner service from 5 p.m.–2 a.m. most nights. After the dinner rush, everyone breaks down and heads into the late night menu, and the vibe is always rockin’ until late. I headed out of there at about 11:30 p.m.

I had an amazing time spending a few hours in the kitchen, meeting awesome people, seeing awesome plates go out, and just having a kick-ass time.

Thank you to Chef Trevor and the whole team at Little Donkey for having me.