New CMBs: Learning from the Best in Baking and Pastry 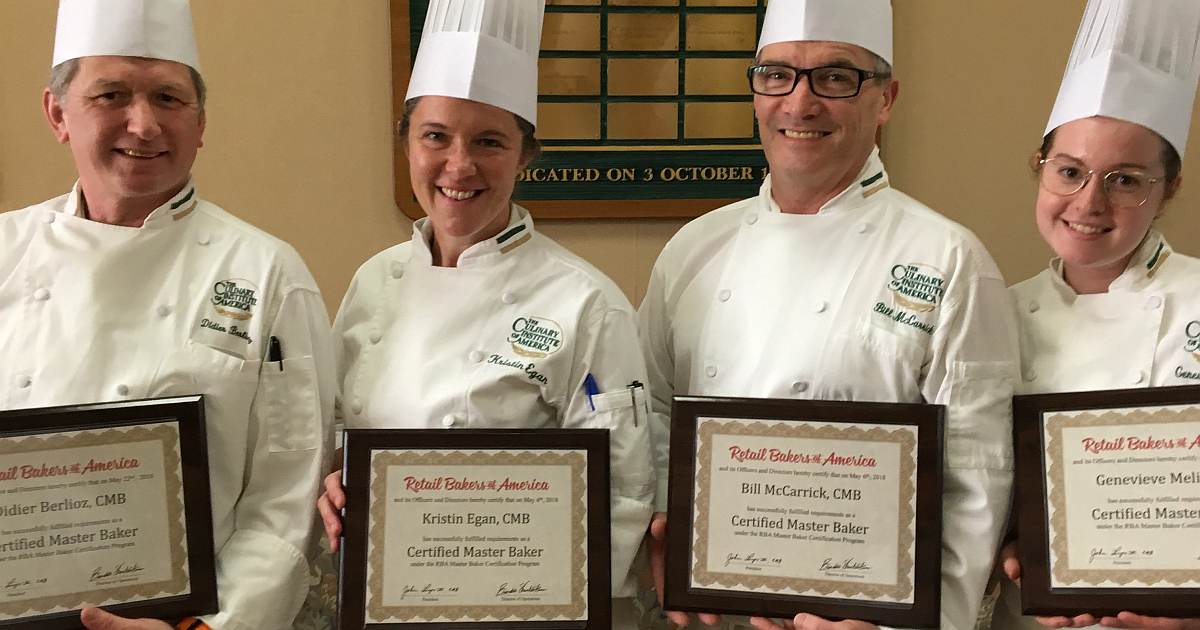 Thinking about majoring in baking and pastry arts at the CIA? Eager to join successful CIA graduates who have gone on to open their own bakeries and cafés, win pastry competitions and awards, write cookbooks, and appear in the media? Then you may be interested to know that four more of your future instructors recently earned the title of Certified Master Baker (CMB): Didier Berlioz, Kristin Egan, Bill McCarrick, and Genevieve Meli. That brings the CIA’s total to 18 CMBs across all of its campuses!

You may be wondering what a CMB is…

The CMB designation is awarded by the Retail Bakers of America and confirms that these 18 chefs have achieved one of the most prestigious certifications available today. “It’s real-world experience that they’re demonstrating throughout the test,” says Marc Haymon, associate dean of baking and pastry arts. “They have to know ingredient functionality, how the machinery works, presentation, and taste—all of the considerations that go into the day-to-day business of what a student might do, but at the highest level.”

If you’ve been considering a career in food and have a special interest in pastry or baking, the CIA is widely regarded by the industry as the premier college to prepare you for success. According to Chef Egan, “The CMB certification gives CIA students confidence in the people who are educating them. They can continue their studies knowing that they’re getting the best education.”

Experts who’ve lived it…so you can learn it

CIA baking and pastry arts instructors are invested in your education and your career success. Each one possesses a diverse set of skills and knowledge that they’re eager to share with you. “We teach why,” says Chef Egan, herself a CIA graduate. “We don’t just tell you to do it ‘this way.’ We explain why you are doing it this way and what is happening. When you know why something went wrong or something went right, you know how to fix it or alter it if you need to.”

“If you have the passion for cooking or baking, you belong here,” adds Chef Meli, a CIA graduate and author who was named to the 2016 Zagat Survey list of 30 Under 30 Rock Stars Redefining the Industry. “You’re going to have access to the best of the best of the best.”

To prepare for a career that’s always on the rise, learn more about the baking and pastry arts degree program at the CIA’s New York, California, or Texas campus.