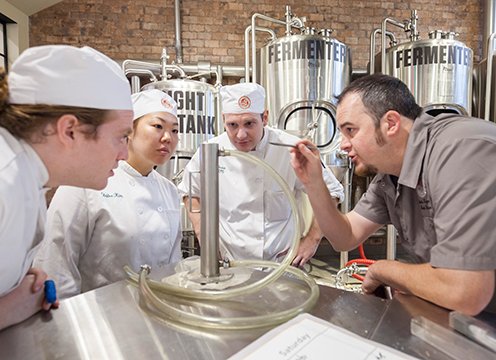 When Samantha Bernstein, marketing manager for Brooklyn Brewery, asked bachelor’s students in the CIA’s Art and Science of Brewing class to share their thoughts about their brewing education at the college, the responses were as diverse as they were passionate.

“A lot of us are going to be sommeliers, dining room managers, chefs, so we like to learn about beer, about what sells”…

“I like the holistic approach to learning, the history, how we got to where we are today”…

“I feel like beer is less pretentious than wine, open to anyone to drink.”

It was music to the ears of Bernstein, who was on campus for a presentation to students on marketing craft beers. Brooklyn Brewery has partnered with The Culinary Institute of America to open the CIA Brewery at The Egg, the new dining facility on the college’s New York campus. The brewery is yet another valuable addition to the students’ hands-on experience.

“It’s a really amazing partnership for us,” she says. “We believe education is incredibly important, and bringing beer to the table where food and beverage meet for these students couldn’t be more fulfilling.”

Senior Justin Wallace agrees. “The Brewery at the CIA is a tremendous learning experience for the student body here,” he explains. “If beer is being sold at The Egg, it might as well be made by students in the same way the food is made. Professor Miller and Hutch both have tremendous knowledge about brewing.”

“Professor Miller” is CIA instructor Doug Miller ’89, who brings great experience and enthusiasm to the expanded brewing curriculum at the college. And “Hutch” is Hutch Kugeman, the recently hired brewmaster at the CIA Brewery, a position he describes as his “dream job.”

“The students are so excited and eager to learn,” he says. “I really enjoy working with them. The entire campus is really a creative, energetic place.”

Just what kinds of things will the students be doing in the brewery? “We make sure all students get a chance to do everything, get involved in some way with each step of the brewing process,” Kugeman explains. “We brew our regular beers—an IPA called Cleaver and a Belgian wit we named Mise en Place—and then students get to choose beers to round out the lineup. Every class has a chance to create something new, and they’re brewing with a purpose, making something you can sell and that is seasonally appropriate.”

The most recent class project is a stout that features a lot of oatmeal and malts, with 6% alcohol content. “It has dark flavors, and we balance it out with sweetness,” Kugeman says.

While the beer from the brewery can only be sold on campus, the learning sometimes extends outside the boundaries of the college, according to Kugeman. “We get to go out and do beer festivals, be part of the community, help charities,” he says. “What could be better? We’re getting the CIA name out there, and we get to share great beers with people.”