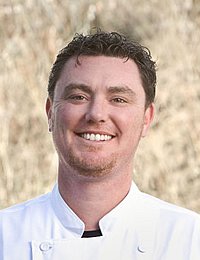 Cooking always came naturally to Chef Nate Keller ’99, Director of  Corporate Dining at Comcast. Raised by a single mother in Sacramento, CA, Nate learned to cook early on utilizing many fresh vegetables from the ever-present garden in the backyard. After high school and unsure of his future, Nate chose to forego college to travel for a time. Returning home Nate realized he wanted to cook.

I Found My Calling

A trip to New York City gave him the chance to visit The Culinary Institute of America’s Hyde Park campus. “I walked in the door and knew this was the place for me. Being surrounded by people who are so passionate about food was a revelation. There were others just like me who could happily talk about food all day. I felt I had found my calling and enjoyed it so much that it didn’t seem like work to me.”

“At the CIA you learn the fundamentals and work ethic that are an integral part of the profession,” Nate says. “In school I learned basic skills and core knowledge. During my CIA externship I learned how absolutely committed you must be to the profession. I was shown what level of commitment it takes to be an amazing chef and leader and it made me a better student. Having the CIA on my resume open doors for me and gave me the opportunity that would lead me to where I am today.”

Working at a Little Start Up

That opportunity came in 2003 when Nate was offered a position as a sous chef at a young start up called Google. He was the culinary team’s ninth hire. By the time Nate left in 2008 he was leading a world-renowned food program with a culinary team of 675 serving 40,000 meals a day.

Following his tenure at Google, Nate launched his own catering company called Gastronaut then joined Sprig, an organic meal delivery service, as it’s founding executive chef. In May 2016, Nate became the Director of Food at Zesty, the largest corporate caterer in San Francisco. Zesty provides quality meals to employees of small and medium-sized businesses that can’t afford full-time chefs, and don’t have commercial kitchens at their disposal. “Most new startups are started by tech guys not chefs,” says Nate. “We provide catering to San Francisco and the Silicon Valley’s Peninsula serving companies from San Mateo to Mountain View. Providing catering to employees in this competitive market is viewed as a necessary perk to retaining top talent.” Under Nate’s leadership, the company has also developed a partnership with the non-profit Food Runner, whose mission is to help alleviate hunger in San Francisco, while preventing waste and creating community.

The Best Come from the CIA

Nate certainly has come a long way from his High-Volume Production Cookery class. “I think you get the best education from the CIA,” says Nate. “I’ve found that the quality of people who come out of the CIA far outweighs students from other schools. If your heart is set on the food industry explore all your options, do what makes you happy, and everything else will follow.”

Chef Nate Keller majored in culinary arts at The Culinary Institute of America in Hyde Park, NY. He is the director of corporate dining at Comcast in San Francisco, CA.