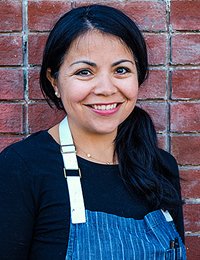 Lisa Vega learned to cook at her grandmother’s knee, but although she loved to cook, she found herself pursuing a degree in English literature at Loyola Marymount University. However, the call to cook was strong, and Lisa decided that her next step would be to pursue her passion at The Culinary Institute of America, where she earned a certificate in baking and pastry arts at CIA’s California campus.

After graduating from the CIA, Lisa joined the team at Bouchon Bakery in Yountville, CA. She went on to enjoy great success at both Craft and Providence in Los Angeles, CA; and Michael Mina’s Bourbon Steak and Restaurant Gary Danko, both in San Francisco, CA. At Craft, Lisa headed up morning production and learned how to execute with precise attention to detail. At Providence, she worked with Michael Cimarusti ’91, who imparted his sense of pride and care for ingredients, and interest in molecular gastronomy.

In 2013, Vega became executive pastry chef at Dandelion Chocolate, a pioneering bean-to-bar company. She oversees all pastry and outlets for Dandelion, including a new commissary kitchen, hot chocolate stands, and the company’s recent expansion to Japan.

StarChefs.com selected Lisa as one of the 2016 San Francisco Rising Stars. In 2017, she released her first cookbook, Making Chocolate: From Bean to Bar to S’more: A Cookbook.

Chef Lisa Vega majored in baking and pastry arts at The Culinary Institute of America at Greystone. She is the executive pastry chef at Dandelion Chocolate in San Francisco, CA.