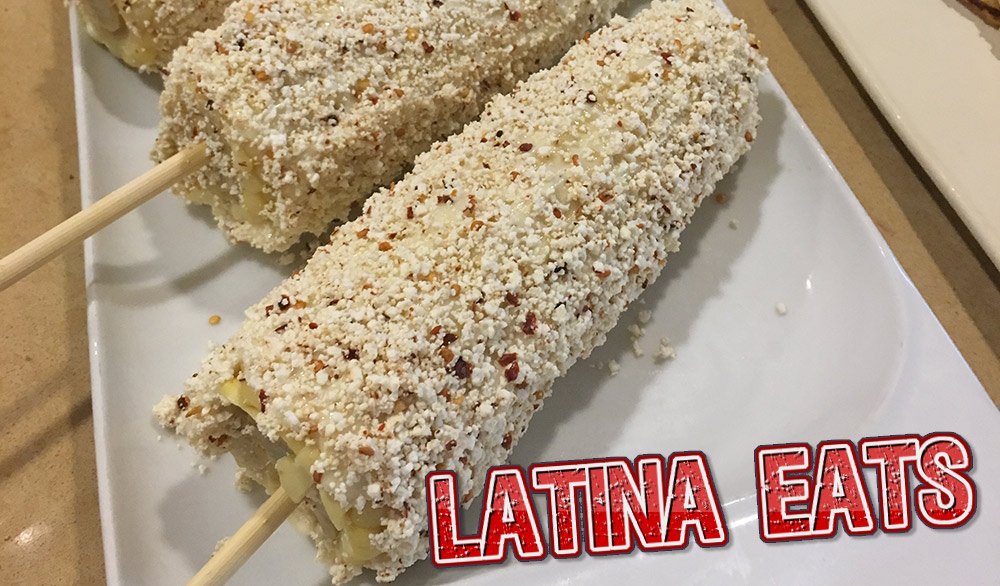 This is the second entry of a multi-part series by our student blogger Giselle.  Check back each week for the next installment of her experience during her semester away in San Antonio.

Hey there, I hope everyone’s had a wonderful start to their summer! I, for one, have had a great start to mine! As y’all know, I have been anticipating moving to San Antonio for a few months now, and I can happily say that day has finally come.

Time to begin the Latin Cuisines Concentration at the CIA!

This week has been…

I mean wow…where do I even begin? It’s always fun to explore a new city as exciting as San Antonio, but I feel like this place is really great for learning as much as it is to enjoy. There are so many restaurants that scream diversity. Really though, in the last week I have passed by a Peruvian, Ethiopian, Korean, and even a French-German brasserie…this is food heaven for anyone who loves to explore up-and-coming food scenes (especially with Austin being only an hour away). I honestly didn’t expect this from San Antonio. For some reason I had a very different impression of it before moving…but to my surprise this city is undoubtedly blowing up with talented chefs with an unstoppable push for creativity and passion (as well as an open-minded customer base willing to experience unique flavors). San Antonio is booming, and it can’t be stopped! For anyone who thinks this city offers solely BBQ and Tex-Mex (which are both done really well here), you are sadly mistaken! I’ll be posting some of my favorite spots my classmates and I try out so y’all can see the gem that is San Antonio.

My four classmates and I were assigned to live in the Tobin Lofts which, by the way, totally exceeded our expectations. These apartments are resort-style, including a gym, a beautiful pool, and many other things like pool tables, video games, and fully equipped study rooms, which I am currently using. #ShoutoutTobinStudyRooms.

Let’s talk about the good stuff, the School! 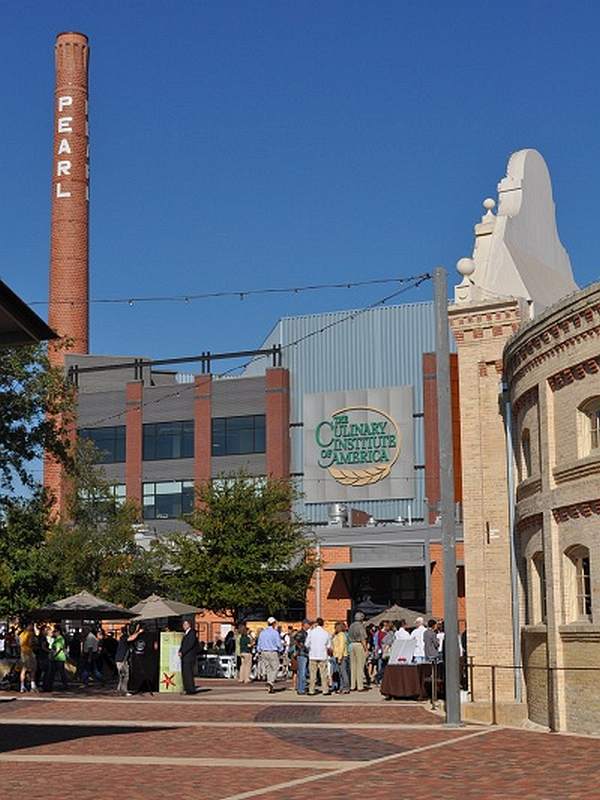 Located in the Pearl, a central location for San Antonio locals, this hip neighborhood used to be the Pearl Brewing company starting in the 1880s, but since its closing in 2011, the space was transformed into a super hip and modern neighborhood that is home to the CIA, restaurants, artisanal shops, and even a farmers market on weekends. It’s also located right by the San Antonio Riverwalk!

Walking into the school for the first time, I automatically felt like it was a tight-knit community compared to the larger Hyde Park campus. Everyone knows everyone here, and it felt really nice to know that my classmates and I were going to be part of this little family for the next 12 weeks. Everyone was super welcoming and we felt right at home as we were introduced to staff and students. 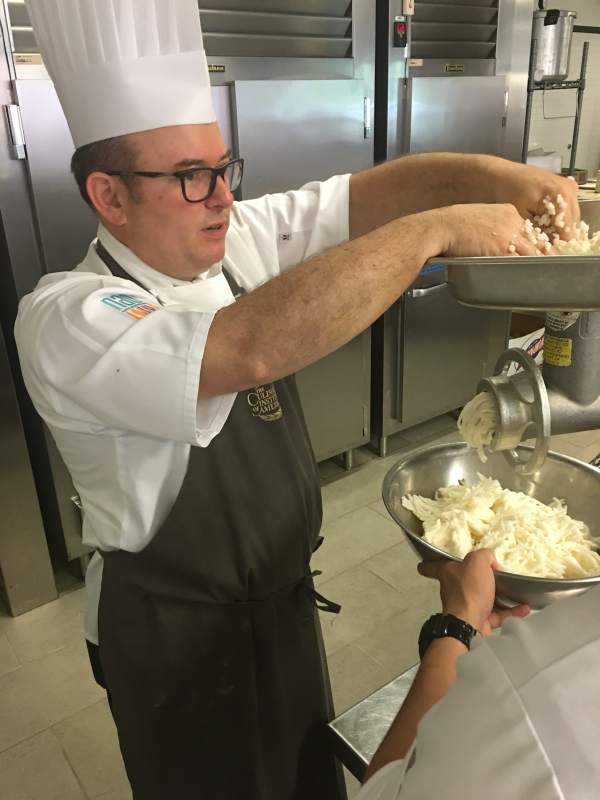 Chef Sergio Remolina is going to be our instructor for the next 12 weeks and let me tell you, he is a fountain of knowledge. In just one week of class we have learned so much from him. Bursting with positive energy, humbleness, and innovation, Chef Remolina is the perfect candidate to teach us about the beautiful food of Latin America. He was a professor at the Hyde Park campus for six years before moving to San Antonio to start the Latin Cuisines Concentration and has a very impressive background. He was the opening executive chef at the Bocuse Restaurant—the French restaurant at the Hyde Park campus. He was also the former executive chef at the Mexican Embassy in Paris, restaurants in Mexico City, and in Ciudad Juarez. To say the least, he knows what he’s talking about! My classmates and I will be sponges this semester taking in as much knowledge from him as we can.

My Impression of the Class

As far as the curriculum goes, it looks completely different from any class I’ve ever taken in the Hyde Park campus. The course focuses on many Latin American countries; not only their food, but their unique cooking methods. Since I’m Mexican-American, this course really hits home to me and sparks so many food memories from my childhood. I’m so ready to enrich my knowledge about my Mexican culture on a deeper level, but it is equally great to know that I’ll be learning about other countries of Latin America like Brazil, Colombia, and so many more. But even if you aren’t of Latin American decent, this concentration will easily be one of the most impactful and fascinating courses you will take while studying at the CIA. Chefs like Alex Stupak, who created Empellon in New York City, and Rick Bayless, who created an empire of Mexican restaurants in Chicago, are not of Latin descent yet are some of the leaders in this industry. Why is that? Because they pursued this cuisine with passion and appreciate the beautiful culture that is offered in Latin America. If you have the passion to learn and be surprised by what Latin America offers, this concentration is really going to blow you away! 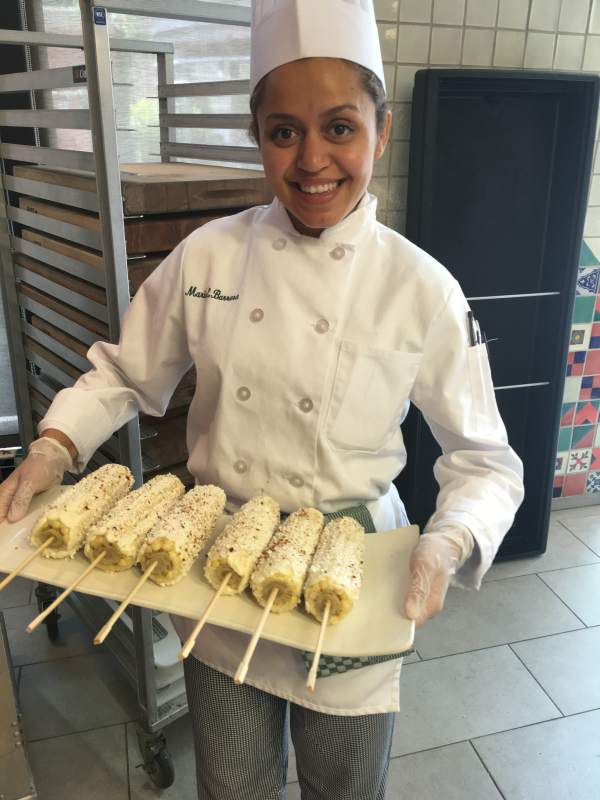 We identified different varieties of corn, cooked some delicious corn-based recipes, and learned about the how preparations vary depending on the country you’re in. It is mind-blowing to think about the simplicity of corn and how it has been transformed into so many beautifully prepared recipes over hundreds of years. One of my favorite parts about this week was when Chef Remolina taught us how to make fresh masa. From the nixtamalization process to the grinding of the corn, my classmates and I now have an appreciation for the labor-intensive process that takes pace when making masa.

Here’s what we cooked up in the Latin Kitchen this week. And stay tuned to see what the Latin class will be cooking next week!

Latest posts by Giselle Sigala (see all)
« Graduation: Looking Back on My Time at CIA » Latina Eats: Settling In and Venturing Out