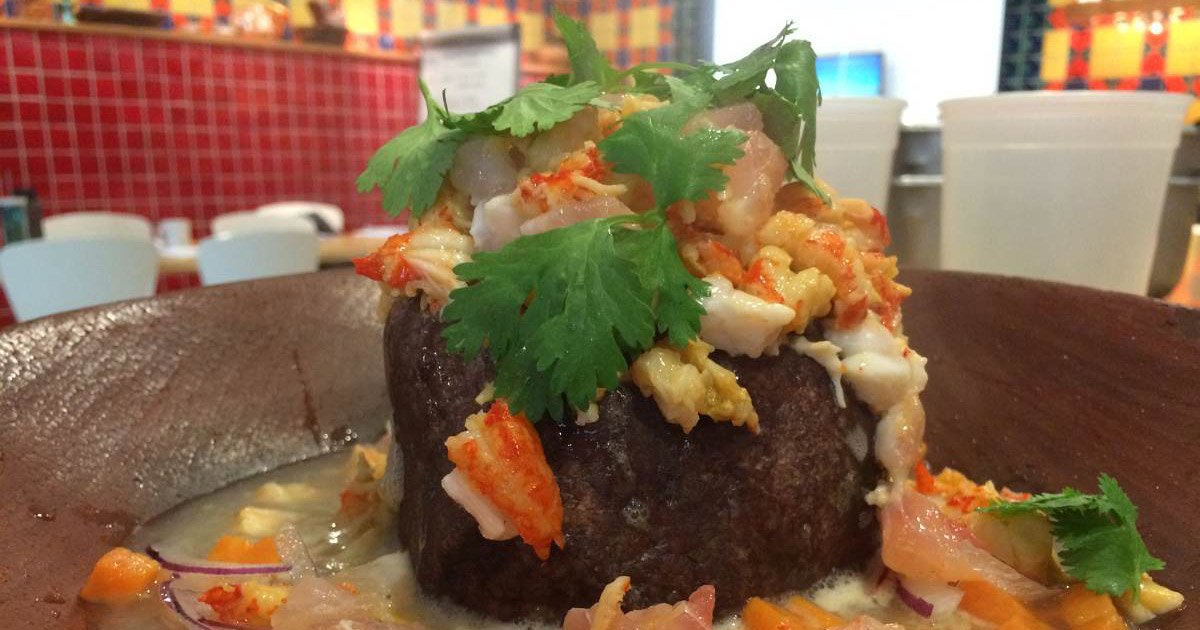 This is the eleventh entry of a multi-part series by our student blogger Giselle.  Check back each week for the next installment of her experience during her semester away in San Antonio.

Hi everyone! Thanks for checking back to see what my classmates and I have been learning this past week. Now, usually in the Latin Kitchen, we learn about several countries in one week. Not this time. This week was definitely an exception—we only studied the food of Peru. And let me tell you, this country needs more than a week to even begin to scratch the surface of its beautiful cuisine.

As we continued our South American studies, we dove into the vibrant culture of Peru. Located in western South America, Peru is one of the most diverse countries we have studied in this section of the curriculum. This diversity could be because Peru borders Ecuador, Colombia, Brazil, and the Pacific Ocean. Or maybe because it was home to one of the most advanced ancient civilizations in the world, the Inca. It could even be because of the geographical diversity, from the Pacific coast to the Andes mountains to the Amazon. These factors alone provide the country with a rich culture, plus an amazing cuisine that has swept the globe as a gastronomical phenomenon in recent years.

We began this week by learning about the coastal cuisine of Peru, which obviously lends itself to lots of seafood—ceviche specifically. During the first day of the week, this was the only thing we prepared. One would think, “Oh, ceviche. How different could each one really be?” Which makes total sense. I mean, ceviche is just seafood and lime juice, right? Not at all! To my surprise, there is so much more. Thanks to Peru, I’ve learned that there are endless ways to prepare ceviche.

One of my favorite recipes this week is called ceviche a la piedra, which translates to rock-style ceviche. I chose to make this because I was curious to see how a rock would play into the recipe. The ceviche was made with snapper, sweet potato, habanero peppers, and leche de tigre, which is basically a citrus-based marinade that appears milky. It takes on this appearance because it also has scraps of fish added—hence the name “tiger’s milk.” Talk about a flavor punch. The best part of the ceviche (besides the flavor) was how it was presented. The rock was placed on a grill for a few hours, making it extremely hot. When it was time to plate the ceviche, the hot rock was placed in the middle of a beautiful clay bowl, then the fish was placed on top of the rock. The leche de tigre was then poured on top of that. Sizzling and aromatic, this dish really blew me away in terms of flavor and especially presentation. Who would have thought that a warm ceviche would be so delicious? I’m amazed with techniques like these that are a simple reminder of the surprising cuisine Latin America has to offer. 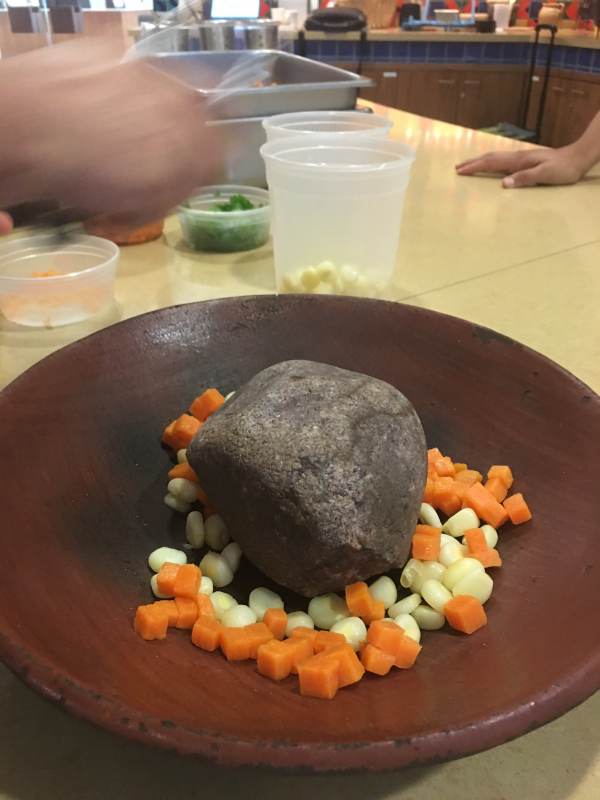 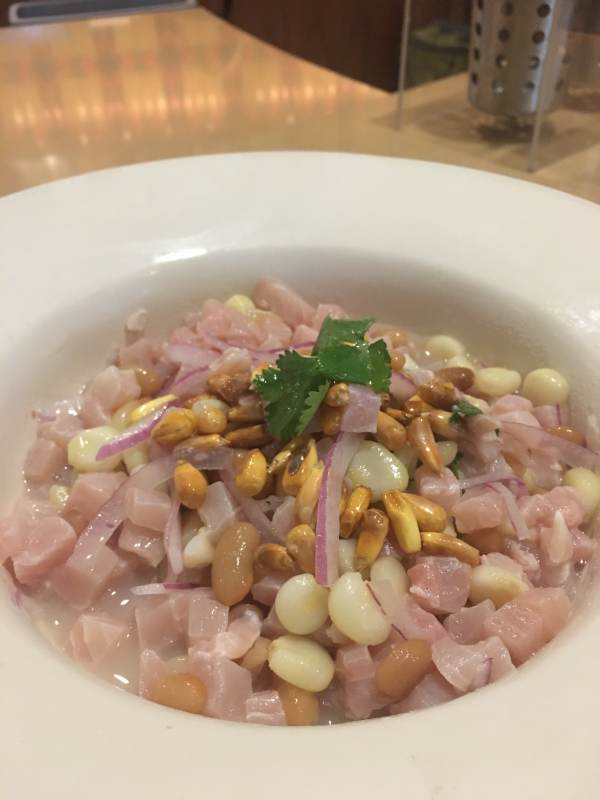 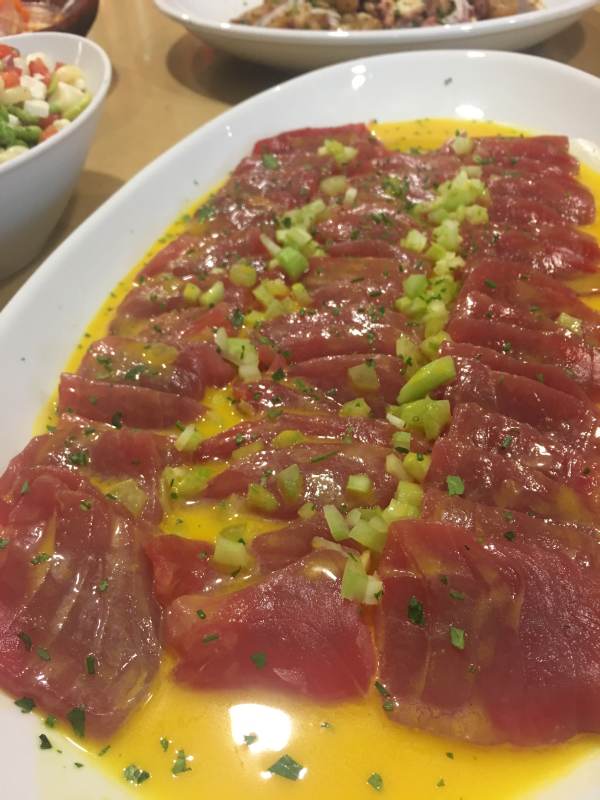 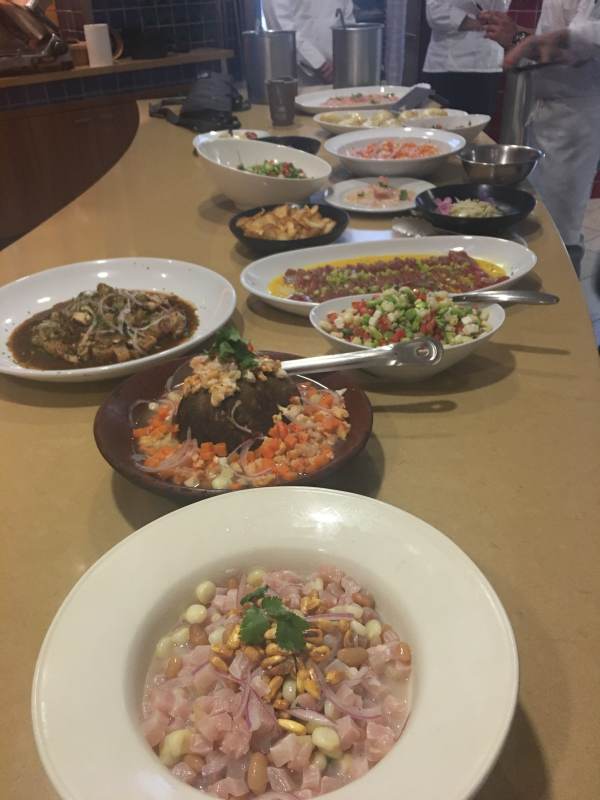 The Andean Region of Peru

Cuisine from the Andean region of Peru is the complete opposite of the coast. Fish is exchanged for meat, potatoes, and corn, making this region known for their hearty and filling dishes. Just like the coastal region, the Andean region also has interesting cooking techniques like underground cooking. Cooking by digging holes in the Earth and insulating that heat by using stones has been practiced in this area for thousands of years, and takes its roots from the ancient civilizations that perfected this style of cooking.

Anticuchos, which are skewers of tender grilled marinated meat, was one of my favorite recipes from this region. These flavorful bites are known as one of the down-to-earth street foods of Peru. Skewers can be found with a piece of potato or bread at the end, making it that much easier to devour in 3 seconds. And, of course, there’s always a bright and flavorful dipping sauce to go with it. Traditionally, these are prepared by using beef heart, but this week we used lamb loin. It was marinated in aji panco (a chile puree), roasted garlic, and malt beer. They were grilled on skewers and served with potatoes. Simply delicious! The aji panco was a game-changer in this recipe. It completely transformed the flavor profile of the lamb in the best way possible. Needless to say, I’m glad to have discovered this awesome ingredient and this dish. 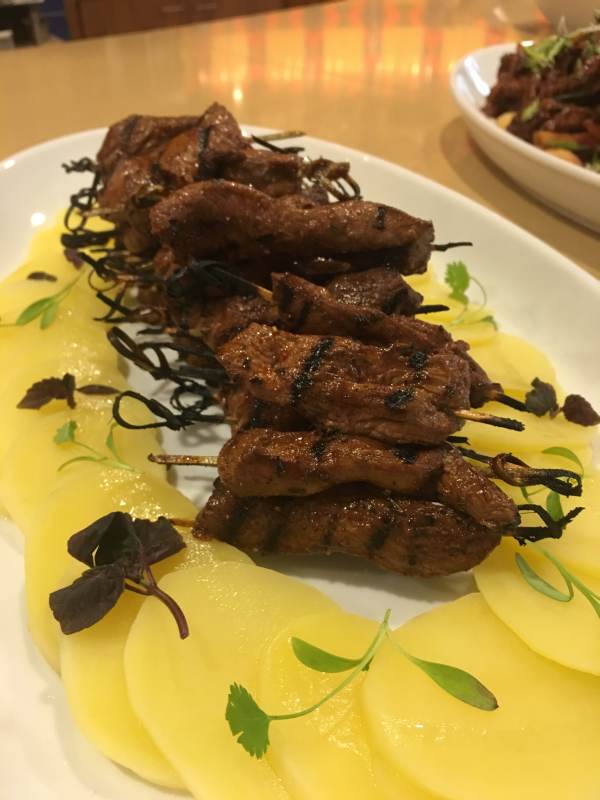 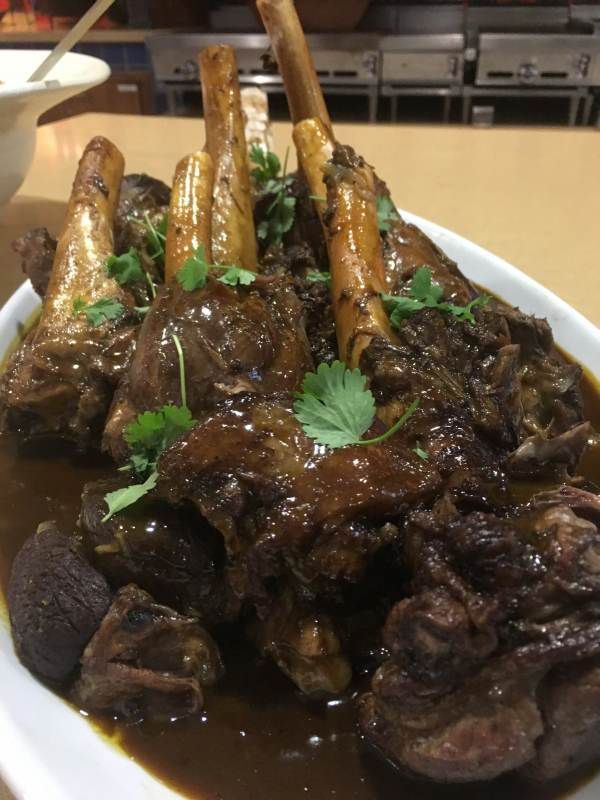 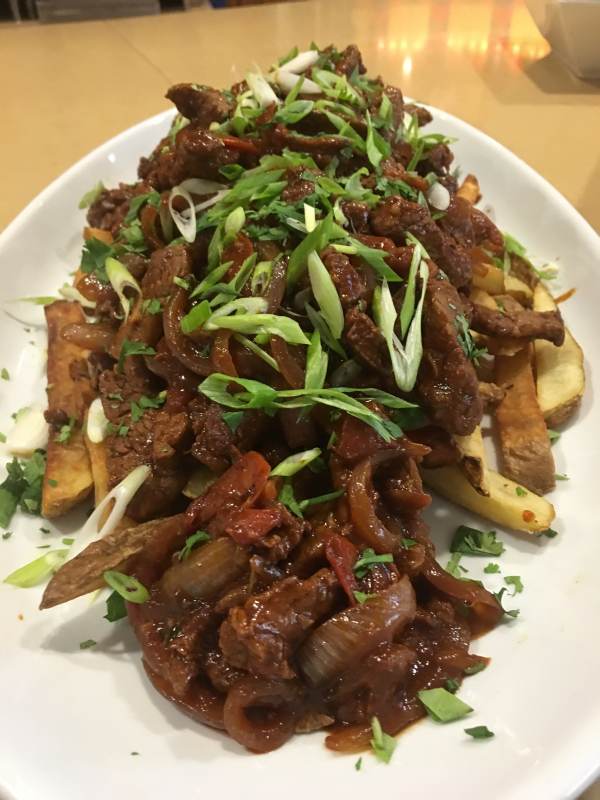 Lomo saltado, a dish with chifa roots, the Chinese-influenced cuisine of Peru 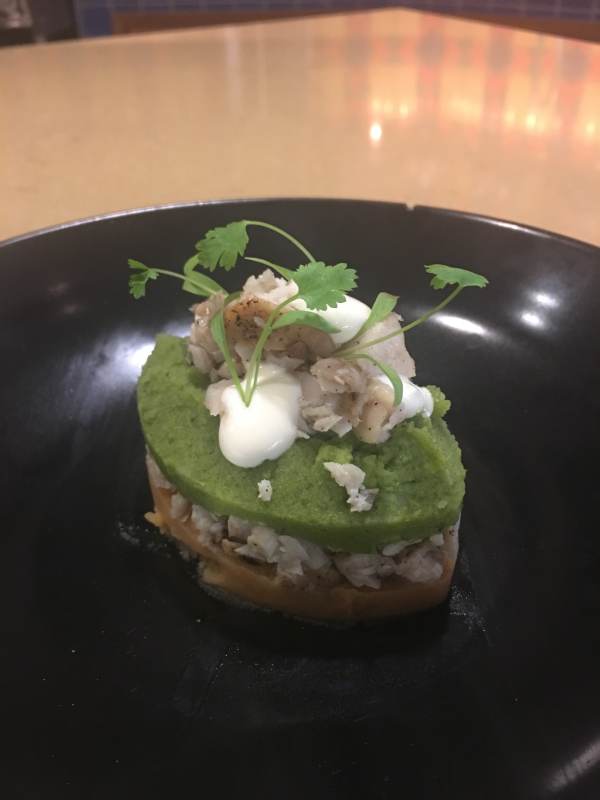 An individual plating of a causa, a layered cold dish made with cilantro- and habanero-flavored mashed potatoes and a mahi-mahi filling, garnished with lime mayo and cilantro 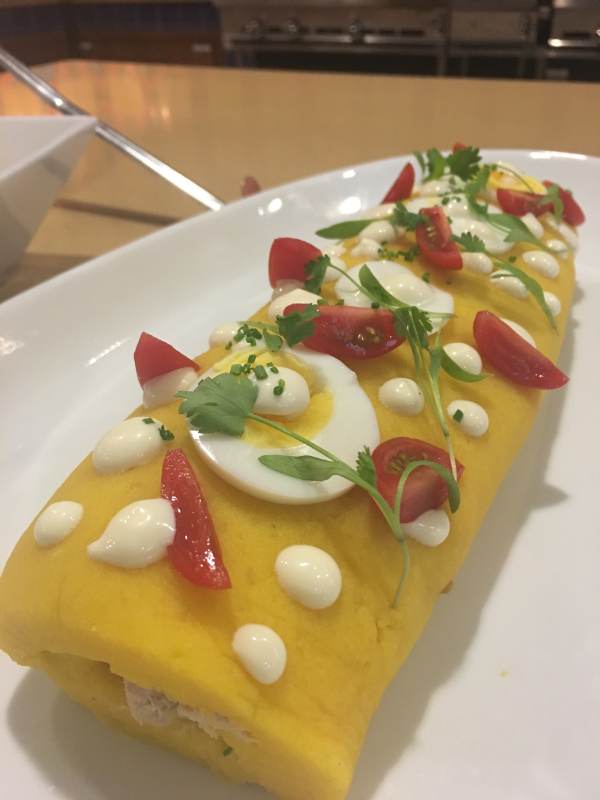 A larger portion of a causa. This one is a turmeric-flavored mashed potato filled with olive oil-poached tuna. 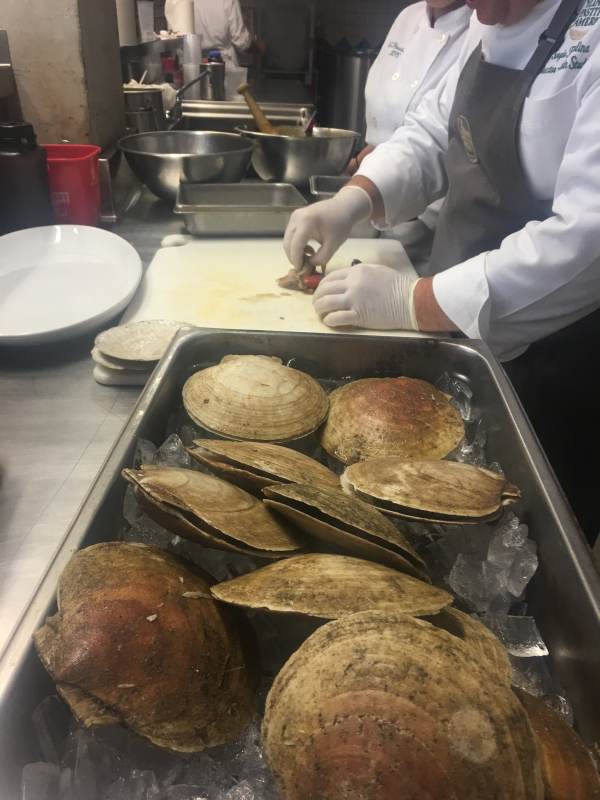 I have two short weeks left at the San Antonio campus and I have to say, it’s very bittersweet. I am obviously excited to go home to see my family for the rest of the summer, but on the other hand, I’ve had the experience of a lifetime here thanks to everyone on campus. I’m going to miss it very much. I’ve had an amazing time so far, and I can’t wait to see what else I’ll be learning in my last couple of weeks here. Not only that, but next week is our final pop-up—this one featuring South America, which we’re all excited about. Check back next week to see the dishes we came up with, and much, much more.

Latest posts by Giselle Sigala (see all)
« Latina Eats: Exploring the Flavors of Colombia and Venezuela » The Learning Commons is for everyone