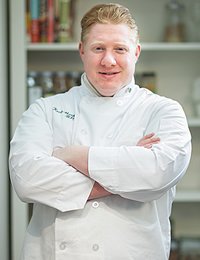 How did you become interested in your major?
On day one of orientation, the Bachelor’s Degree Enrollment Manager Duane Brown, showed us a promo video for the CIA’s Applied Food Studies program and I knew immediately that was what I wanted to do. From as early as 12 I was interested in politics. But when I discovered food politics, I knew I had found my niche.

Who most influenced your decision to pursue this career?
My parents were my biggest influence. I grew up as the son of a chef and event planner, and have spent years in the kitchen and dining room. I think I have always known I wanted to be involved with food, but it took me getting out of the food industry to come to that realization.

Did you have to overcome any obstacles or challenges to come to the CIA?
Yes. Growing up in the food industry, I was aware of a lot of the stigmas associated with culinary schools, such as whether a formal education was a necessity in order to be successful in this industry. The fact is, many chefs have indeed achieved success without formal training but I wanted more than a life in the kitchen. There are a lot of diverse and dynamic culinary career opportunities outside of the kitchen and a degree from the most prestigious culinary school in the country was the clear path for me to achieve my career goals.

Do you already have a degree from another college or did you previously have a different career?
Previously, I was a hospital corpsman in the United States Navy from 2007–2011. I served alongside the Marines in Okinawa, Japan for more than two years. After receiving my honorable discharge, I spent two years studying Political Science at Santa Rosa Junior College in California. While going to school I worked as a catering cook in Sonoma and Napa counties in California.

Why did you choose the CIA?
Simply, I chose the CIA because it is the best culinary college in the country. The prestige attached to having a CIA degree opens many career pathways and valuable industry connections.

What do you like best about the CIA?
The opportunities here at the CIA are endless. Networking with the chefs and alumni has brought me as far as Milan, Italy for the World Fair and as close as Ithaca, NY to Cornell University for a conference on food security.

What is/are the best lesson(s) you’ve learned while at the CIA or what advice would you give to new students?
Work hard, get involved on-campus in a club or two, and never take no for answer. There will always be naysayers, but this mission you are on is yours, not theirs. If you work hard and align yourself with like-minded people, success is the only outcome.

Do you belong to any clubs or participate in any activities/sports on campus?
I started writing for the CIA’s school paper; La Papillote, my first month on campus. Now as the Editor-in-Chief, it is my pleasure to work with some of the smartest and hardest working students on campus to create a publication that I think represents not only the student body but also the world of food.

I also spent one semester in the CIA’s Student Government Association (SGA) as the AOS Culinary Representative. Hopefully my schedule will allow me to return to that position in the future, as SGA is one of the most rewarding experiences I have had here at the CIA. Working side by side with students, faculty and chefs creates a symbiotic relationship that allows SGA to create real change.

What are your career goals or plans right after graduation?
Ideally, I would like to be a writer working as a food journalist in print media or writing food policy for an NGO in Washington DC. I know I can use my words to help influence change in our national and international food policies. It’s time we come together as a species and say enough is enough, we demand sustainably grown food, and I want to be in the forefront of the fight.

What advice would you give to someone who is considering attending the CIA?
Read. Read cook books, read food related current events in newspapers, magazines, and online. Educate yourself in as many avenues of food that you can. Also, get a job in food. Whether in the back-of-the-house or front, seeing and understanding how the industry operates from the inside will give you the best idea as to what direction to head toward.