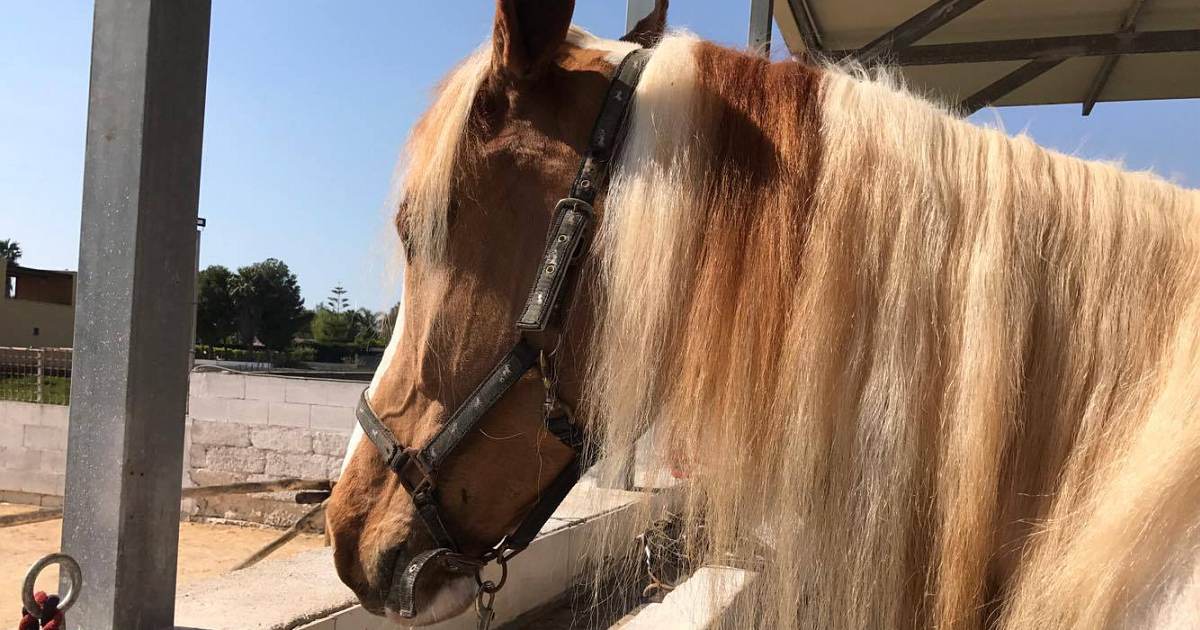 After my adventures working on the farm last week, the farmer, Emanuele offered my friends and me the opportunity of a lifetime. He boards a horse at another nearby farm, and invited us to go horseback riding on the beach! I was very nervous because I have never been horseback riding before, and we don’t speak much Italian so I was afraid I would have no idea what I was getting myself into!

We arrived at the horse farm, and the farm owners had a beautiful stable with many beautiful horses as well as Shetland ponies, a few dogs, a cat, and a pig! 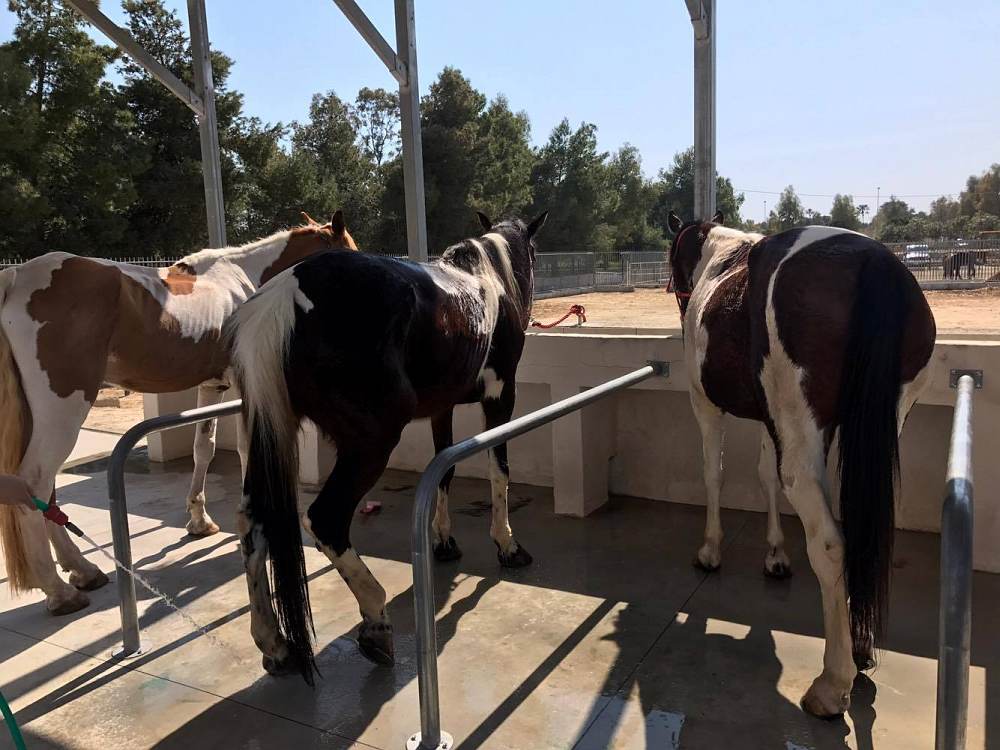 They put me and my friends on horses and off we went to the nearby beach! At first, I had a hard time getting the hang of riding…but eventually, I got the hang of it! We arrived at one of the most beautiful beaches I have ever seen in my life. It looked like the sand extended for miles, the sun was gleaming, and the ocean water was sparkling. The weather was warm and there was not a single cloud in the sky. I can say it was a perfect day. I can also now say I have been horseback riding on the beach…in Italy!

A couple days later, we returned to the horse farm to thank the owners and help brush the horses and clean their stables. Still, only a week later, I cannot believe I had the opportunity to do something so amazing and see such a beautiful place on horseback! It’s a memory that will last a lifetime.

Today, I had a unique experience today during my stage as Jessica and I went to a local pasticceria called Pasticceria Schiraldi to see how local Italian desserts are made. The pastry shop is a third-generation family-owned shop that opened in 1948. 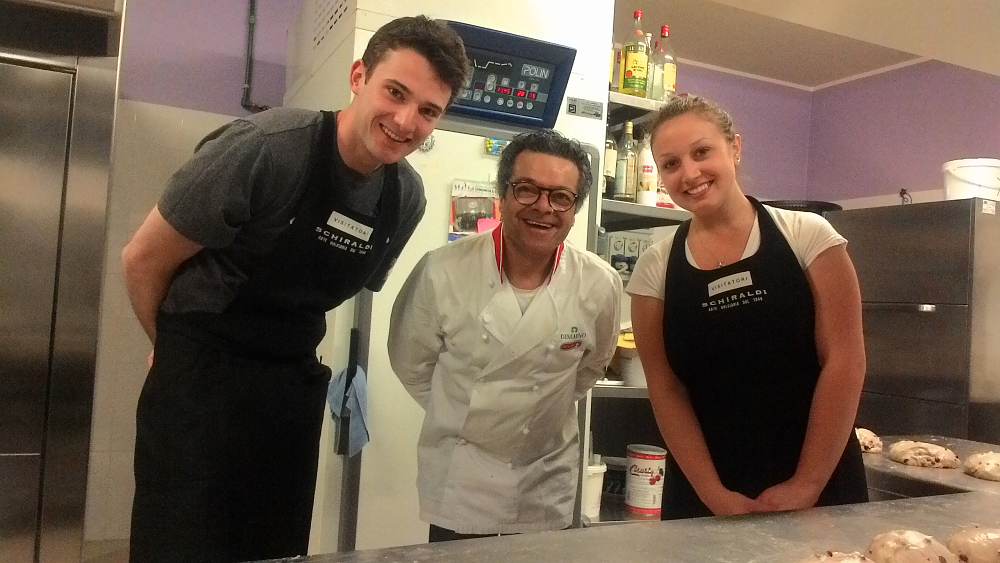 Jessica and me with the owner of Pasticceria Schiraldi

We arrived as they were making colombe (Colombe is an enriched dough bread with dried berries), which is a typical springtime bread that is shaped like a cross. It is a very sweet bread that is made with an enriched dough and garnished with dried berries. We helped them roll the dough and place it in the molds where it then had to rest and rise for seven hours before being baked in the oven. 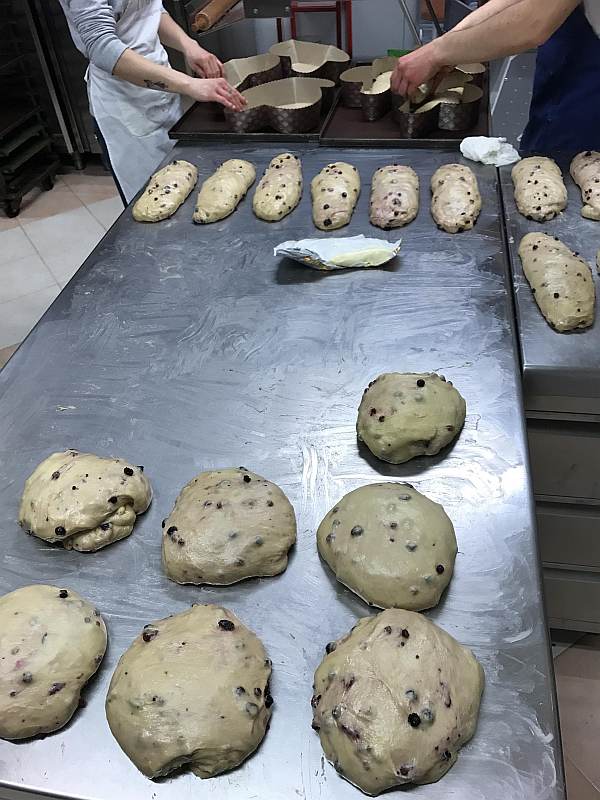 After making what must have been 60 colombe, the owner of the pasticceria asked us to crack two flats, or 60 eggs, for their famous pâte à choux. It’s a light pastry that can be used to make beignets, eclairs, or many other pastries. When baked, it becomes hollow and can be filled with sweet or savory creams or fillings. The dough started with cooking butter, milk, and flour in a large pot until a thick paste began to form. The paste then got added to a mixer where the eggs were added a few at a time. They mixed the dough for about 30 minutes before they began to pipe it on sheet trays. The owner must have been piping for two hours before the dough finally ran out. While he was piping, we were given some of their delicious pastries to try—which included an éclair filled with banana cream, and almond cookies. They told us that they only make the pâte à choux once a week because it is such a time-consuming activity and they hold well when frozen. 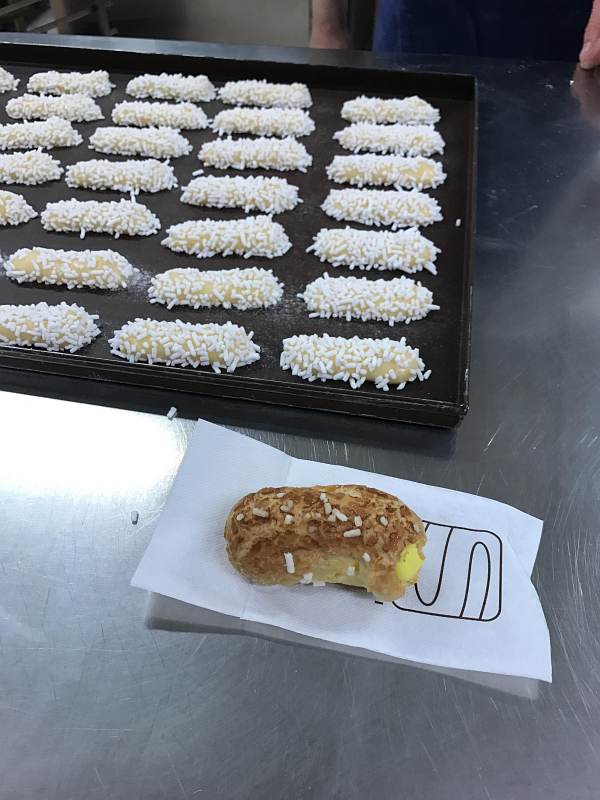 Before and after pâte à choux

It was a lot of fun to learn about traditional Italian pastries and bread. The Schiraldi family is so nice and generous and it was a great experience getting to see how they produce their products.