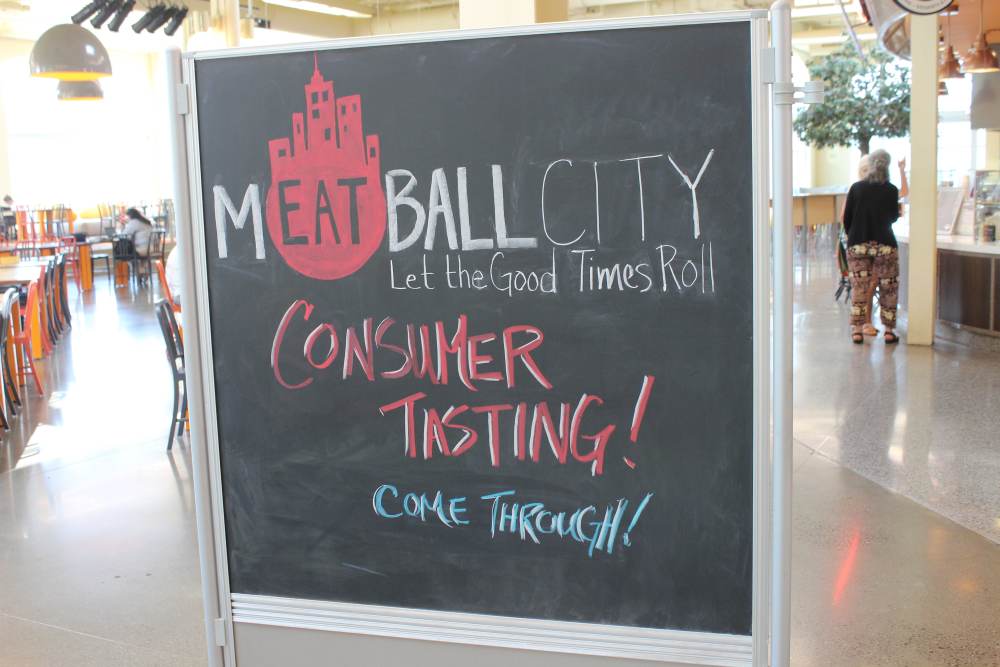 At seven on a warm June morning, we all dashed to our stations in our menu development class carrying our three-year-old knife bags and wearing our pressed chef whites. All 14 of us in the Intrapreneurship Concentration were tasked with preparing a composed plate that could appear on our Meatball City restaurant menu when it eventually opened at The Egg in September. We hurriedly searched for our ordered ingredients to test our different recipes, which included various innovative meatballs like Philly cheesesteak, lamb kofta, Korean fried chicken, and even Thanksgiving turkey. Our goal was to think of meatballs in as many new ways as possible. As we cooked, we meticulously jotted down specifics like the metric weight of each ingredient, changes to traditional methods, cooking times and temperatures, and any new ideas thought of on the spot. In addition to the usual ingredients and cooking equipment, there were multiple laptops, notebooks, pens, scales, and calculators scattered throughout the kitchen.

At 11 o’clock sharp, our plates were due and we gathered around a table to test what we had produced. Our instructor, Chef Mark Ainsworth, and marketing professor, Bill Guilfoyle, joined the conversation as we dissected each meatball and its side components for flavor, texture, preparation steps, and marketability. One of our co-general managers, Yejin Yoon, led the discussion and asked for a vote for each item. If a majority voted “yes,” we added the recipe to the list of other favorites that would one day become our final menu. We are fortunate enough to be able to create our very own restaurant from scratch, and the journey from concept to operation has been filled with trials, errors, and fascinating lessons.

How It All Began

After the stressful restaurant-themed “Pitch-off” before judges last semester, (see mise en place 72), we had three weeks during spring break to let the winning selection—Meatball City—percolate. Some of us were thrilled about it, some were crestfallen, and some were surprised.  However, in hindsight, Meatball City prevailed because it was a quirky restaurant concept that appealed to everyone and could easily serve as a blank canvas, allowing each student in our class to add his or her unique creative input. We decided to incorporate all the best aspects of the three losing concepts into Meatball City. Applying Charcoal’s idea of ethnic flavors from all over the world is a great way of shaking up any presumptions of a typical meatball. Employing RICO’s stance on diversity, charitable outreach, and attention to differing cultures allowed Meatball City to become more sophisticated and purposeful. Finally, incorporating NOPO’s exciting marketing strategies and engaging video content will assist Meatball City in keeping students interested in eating with us for the full 15 weeks of its run.

Our tight-knit group hit the ground running with exciting new ideas for how to make Meatball City “beyond awesome…like stupid awesome!” as our second co-general manager, Benjamin Stone, put it. However, we soon learned not all our ideas were financially feasible or universally agreed upon. The Meatball Mascot logo created by the original team was not beloved by the rest of the class. “It looked like a creepy, bloody ball with a smile on its face,” laughed our purchaser Peter Barry. “Honestly, I was a bit terrified to look it in the eyes.” We also had lively disagreements about which menu items should be saved or discarded, how exactly our marketing budget should be spent, and how Meatball City’s image and identity should be presented. Oh! And don’t forget that, every once in a while, personal conflicts surfaced—inevitable when you’re working with the same 14 people in every class for three semesters! However, I have to say that overall it was an absolutely positive experience. In fact, we only had these disagreements a small percentage of the time. Our class is very productive and we enjoy each other’s company. We bounced all ideas off each other when they arose; communicated constantly through text, Slack, and Facebook; and bonded on our days off with dinner out, video games, cooking parties, and TV marathons. We supported each other, motivated each other, and worked through any disagreements that stood in our way. 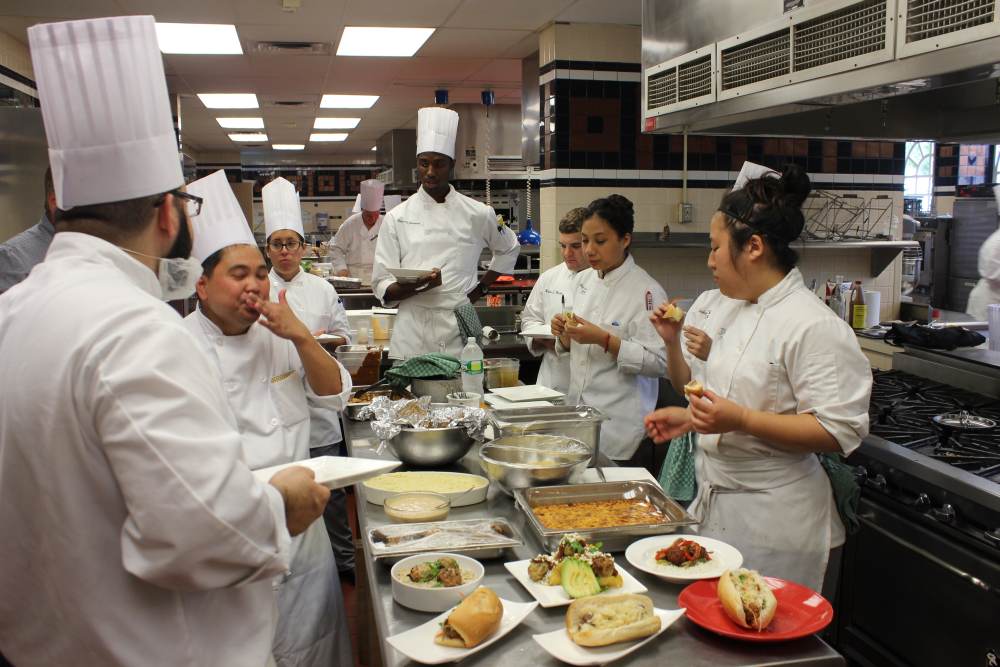 All Hands on Deck

The class was split into three separate teams to accomplish all of our tasks throughout the semester. The Operations Team recorded all of our recipe-testing results, structured our final menu, set up our purchasing process, and formulated our labor schedule and job descriptions. The Finance Team costs out all of our recipes, set budgets, and tried to find the best deals for anything the restaurant might need to purchase. The Marketing Team designed the restaurant’s logos and banners, ordered uniforms and merchandise, and planned advertisements to entice our fellow students.

All three teams worked together to hold a public consumer-testing event in early July to have our menu items tasted, surveyed, and approved. Each consumer filled out a form on which they were encouraged to express their opinions and suggestions about each recipe. We were glad to see that most everything was well-received and that the criticisms or suggestions focused on small tweaks in recipes. Our team reviewed all the surveys and after much discussion decided that a lot of them were about personal preferences. We concluded that we had enough variety in the final menu so people would surely find something they could enjoy. 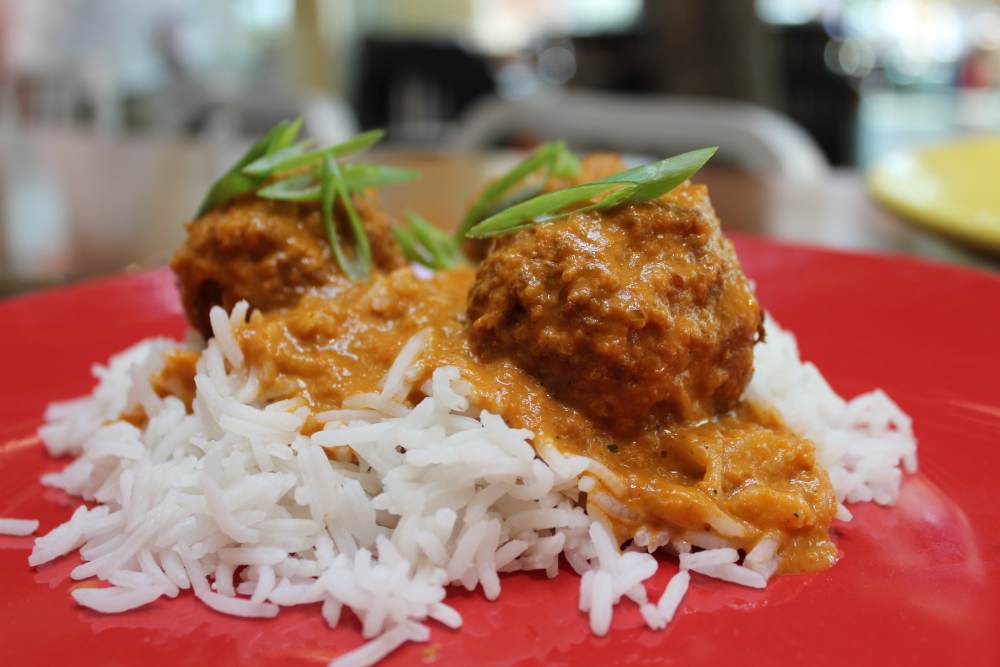 Before we opened in September, we had to be sure we had everything we could possibly need readily available and that the standards we set for ourselves in the beginning were maintained. To accomplish this, we double-checked everything. First, we ensured that our exact uniform and merchandise purchases actually arrived. We also had all our recipes, financial statements, and human resources manual proofread by our professors. Finally, we shot our commercial and fast-motion cooking videos of each menu item for educational advertisements. It was a mountain of a workload, but now the “beyond awesome” Meatball City is fully operational. Thankfully, we had the entire CIA behind us to ensure our success. We can’t wait to share the results of how Meatball City has done in the February edition of mise en place.

Also check out this article about it: http://openforbusiness.opentable.com/features/intrapreneurship-inside-culinary-institute-americas-innovation-kitchen/