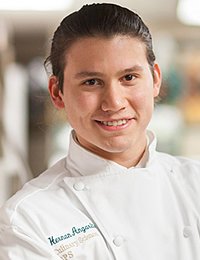 How did you become interested in your major?
I graduated from the CIA’s culinary arts associate degree in 2013 and went straight to New York City to work for Colicchio and Sons. I did my externship at Craft Restaurant and the chef de cuisine asked me to join him at its sister location in the Chelsea meat packing district. I was looking to expand my fine-dining experience and to grow as fast as I could. The restaurant life was demanding, but satisfying. I learned so much from many chefs, but I felt that I wanted something different. That’s how I became interested in product research and development. It’s a branch of culinary arts that many overlook. I started applying for jobs and realized that I needed to further my education in order to enter the R&D world. CIA’s culinary science bachelor’s degree had exactly what I was seeking.

Who most influenced your decision to pursue this career?
Without any doubt, it was my mother. I talked to her often about the challenges and rewards of working as a line cook in New York City. She knew that I wanted something different for myself but that I needed to work with food, my passion. At first, I was researching food science degrees, but they all felt so far away from cooking that it wasn’t for me. Ultimately, I stumbled upon the CIA’s Culinary Science program. I talked to my parents about it and they agreed it was the perfect fit.

Did you have to overcome any obstacles or challenges to come to the CIA?
I’m from Venezuela. Back home, I had a catering business that was going well, but I decided that increasing my education and work experience abroad was a wiser choice for my future. I studied English throughout high school and I felt that I knew enough to study in an English-speaking country. I was definitely not prepared. Everyone speaks so fast and I just couldn’t understand what they were saying. I still remember all those nights that I spent with a dictionary and a glossary of kitchen terms translating every single word. It took me close to two years to be completely fluent in English.

Do you already have a degree from another college or did you previously have a different career?
I graduated early from high school and, without knowing exactly what I wanted, jumped straight into computer engineering. I guess my love for computers wasn’t strong enough to compensate for calculus and physics. I dropped out after two years and enrolled in a cooking school in Venezuela.

Why did you choose the CIA?
I was working the line at a restaurant in Caracas called Mohedano. The chef de cuisine there, Edgar Leal, is a CIA alumnus. I worked for him for a year and a half, doing off-premise catering and other projects. He told me, “If you want to be the very best, you have to go to the CIA.”

What do you like best about the CIA?
Diversity. I still find it baffling how many cultures are represented at the CIA. Everyone comes from various parts of the world and they have completely different food concepts. What I find most enjoyable is tasting the food that my friends grew up eating. The way that each student describes the food that they were raised on is just amazing. Just thinking about it makes me happy and hungry.

What is/are the best lesson(s) you’ve learned while at the CIA or what advice would you give to new students?
I have learned a sense of urgency. I love how every chef drills it into the students’ minds. They have to move fast and efficiently. Knife skills come with experience, but learning how to move through a kitchen during a busy service is crucial. As for entering students, I recommend not overthinking the challenges. Do your best and take pride in what you accomplish.

Do you belong to any clubs or participate in any activities/sports on campus?
I usually participate in the Bacchus Wine Society. I enjoy how they have events every week, both formal and informal wine tastings. Every week feels like a tour around the world. Usually there are guest speakers and much interaction. Students who love wine should check it out.

What are your career goals or plans right after graduation?
I plan to work on product development. I’m one of the advocates for processed food, believing it doesn’t have to be unhealthy or scary. I’m hoping to work for a company that shares my ideals and that helps me grow in the R&D industry.

What advice would you give to someone who is considering attending the CIA?
I would recommend working in a kitchen first. Go to a hotel or high-volume restaurant and cook for six months. If, at the end of it, you still love it, then the CIA is the perfect fit. The CIA will create the essential building blocks that you will need to succeed in this industry.