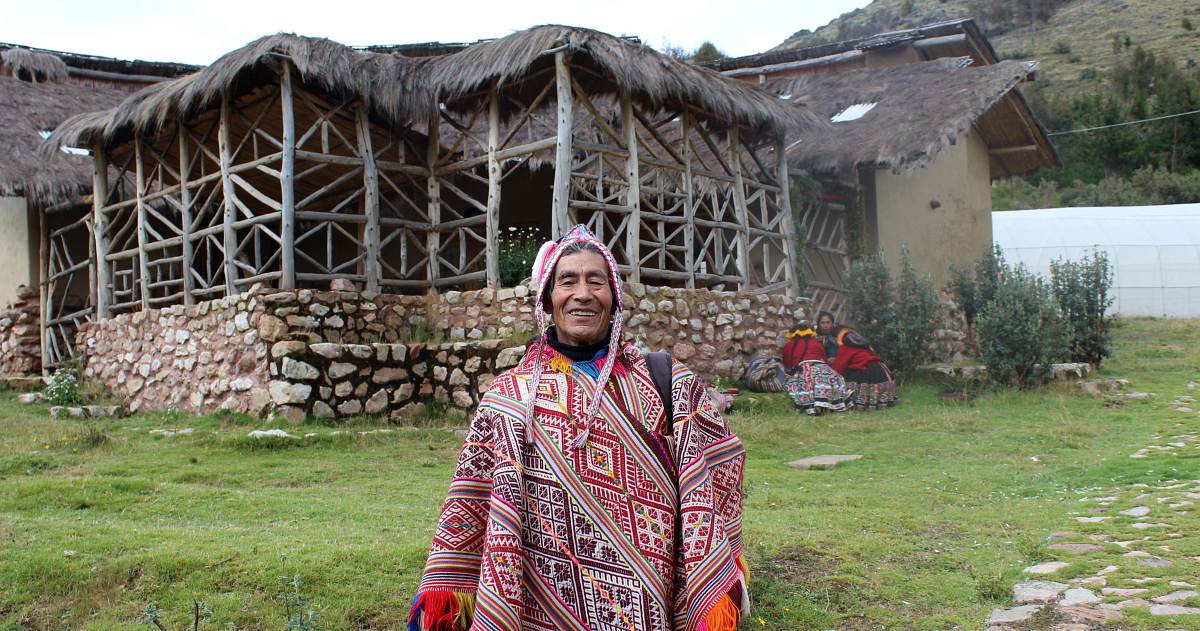 A Day in Cusco

In Cusco, we took an early morning tour of a family-run bakery. After getting dropped off from our bus, we were welcomed into the bakery doors with the inviting scent of eucalyptus burning and the sweet, unique smell of yeast proofing in various rooms throughout the family’s bakery space. Here, they produced a traditional bread called pan chuta in the town of Oropesa. The bread was baked in a traditional oven and flavored with anise and cinnamon. 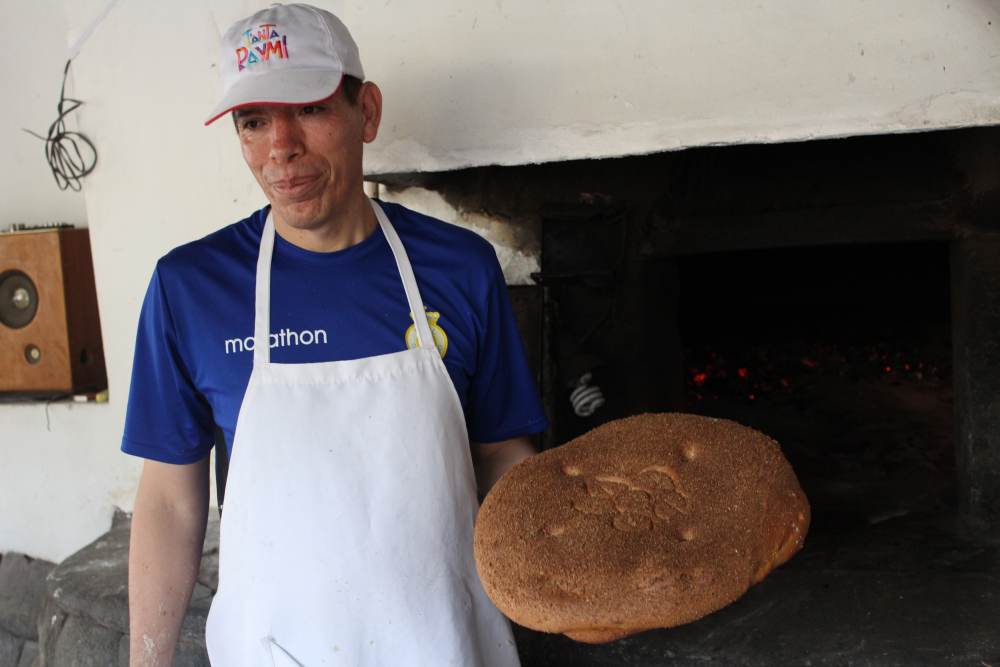 This specific bakery also made a smaller bread and they produced everything by hand. It was inspiring to see a small, family-run business run by true artisans reach such success in selling their craft. The head baker mentioned that three families would rotate during various times of the day, working in shifts so that the fire in the oven never went out. In addition to its use for baking the bread each day, the oven also doubled as a tool for the local community—it wasn’t a rare occurrence to have neighbors bring guinea pig over for a quick roast.

After gouging ourselves on various kinds of bread, we hopped on the bus to head over to a local restaurant for a traditional lunch. We were greeted by the head chef, who gave a demonstration on how to prepare salted pork skin into the deliciously crunchy chicharon. The skin billowed up in the pork lard until it resembled a large, aerated chip. Watching the chef work the pork with two large sticks allowed us to respect the process a bit more than we would have if just making it in a deep fryer at home. 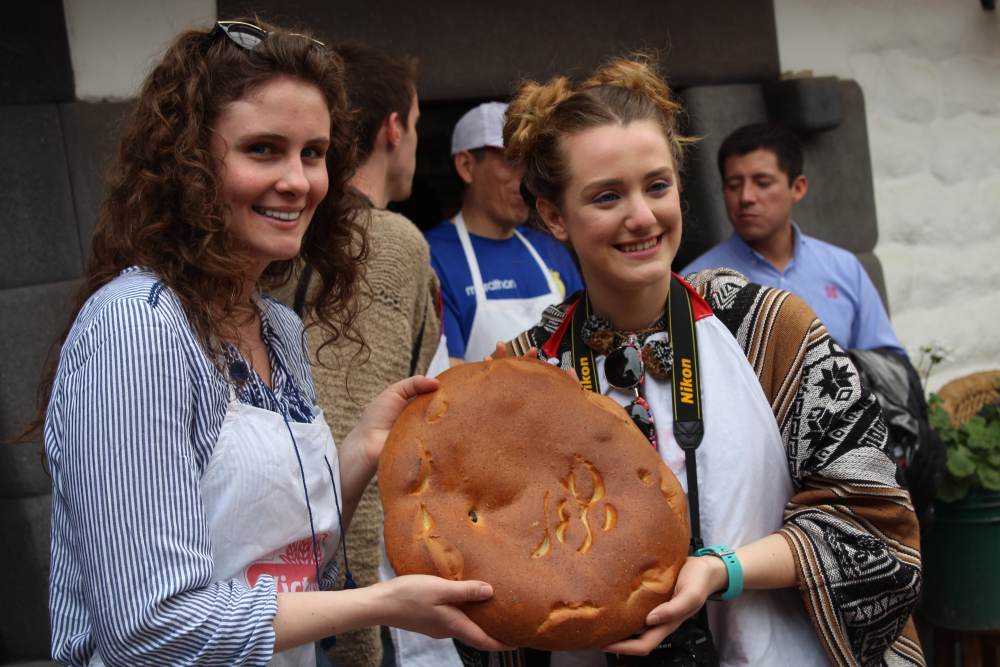 This traditional bread is meant for sharing

After our demo, we were served lunch. This consisted of deep fried pork chunks, fried potatoes, and a simply dressed salad garnished with fresh herbs and a side of uchucuta—the delicious sauce of peanuts, the minty herb huacatay, oil, and aji amarillo. The pork was super tender, and the potatoes remained crispy while having a deliciously tender and fluffy interior. At tables of four, we shared a large bottle of the local beer, played a game of sapo, and enjoyed a relaxing afternoon on the lawn situated next to the restaurant. It was extremely pleasant, and I even got to kick a soccer ball around with some of the other customers in the restaurant. After a busy day hiking the day before, it was a great recovery day! 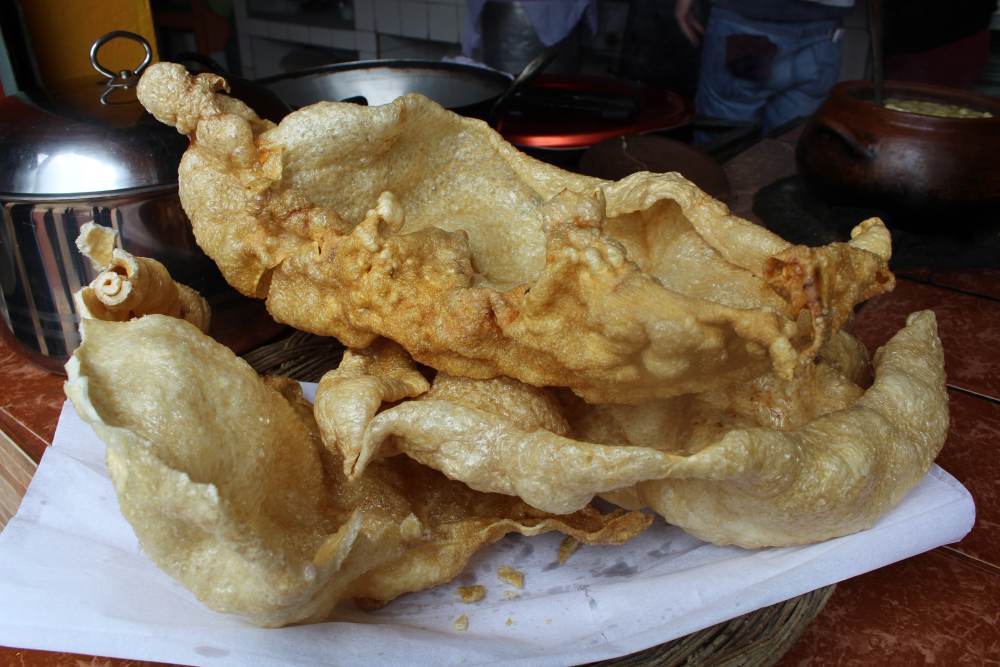 The salt draws the moisture out, and when fried, the skin puffs up to this large size 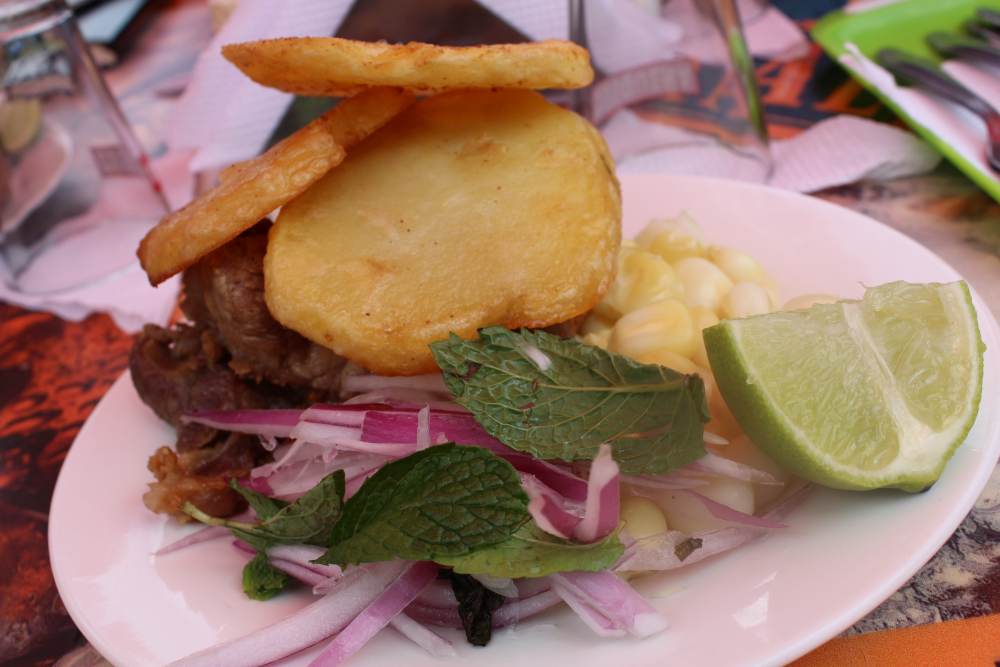 Deep fried chunks of pork are served with fried potatoes, a salad, and choclo, the giant-kernelled corn of Peru 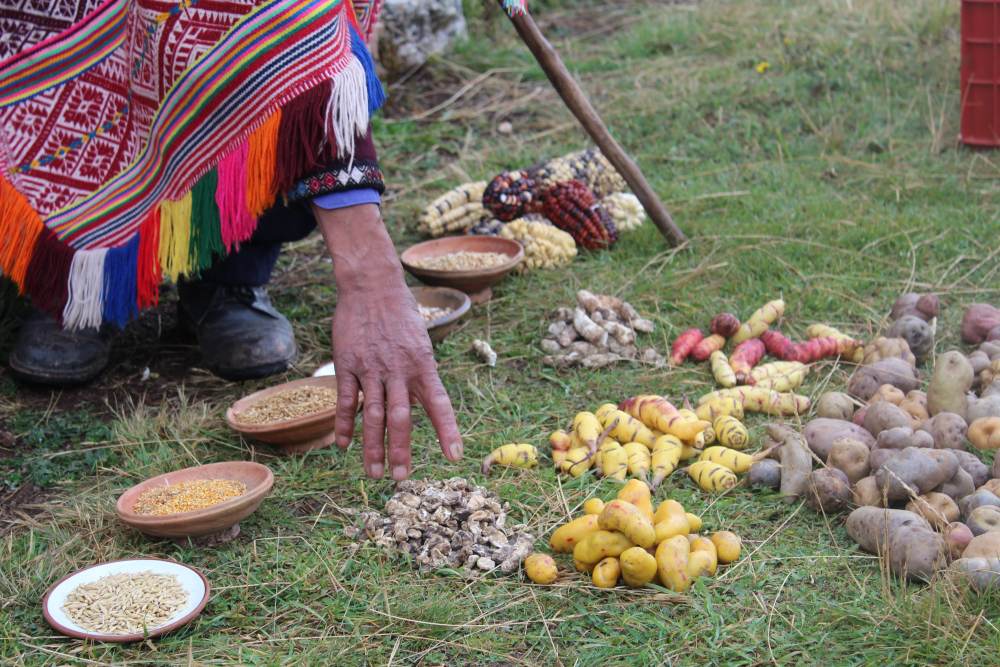 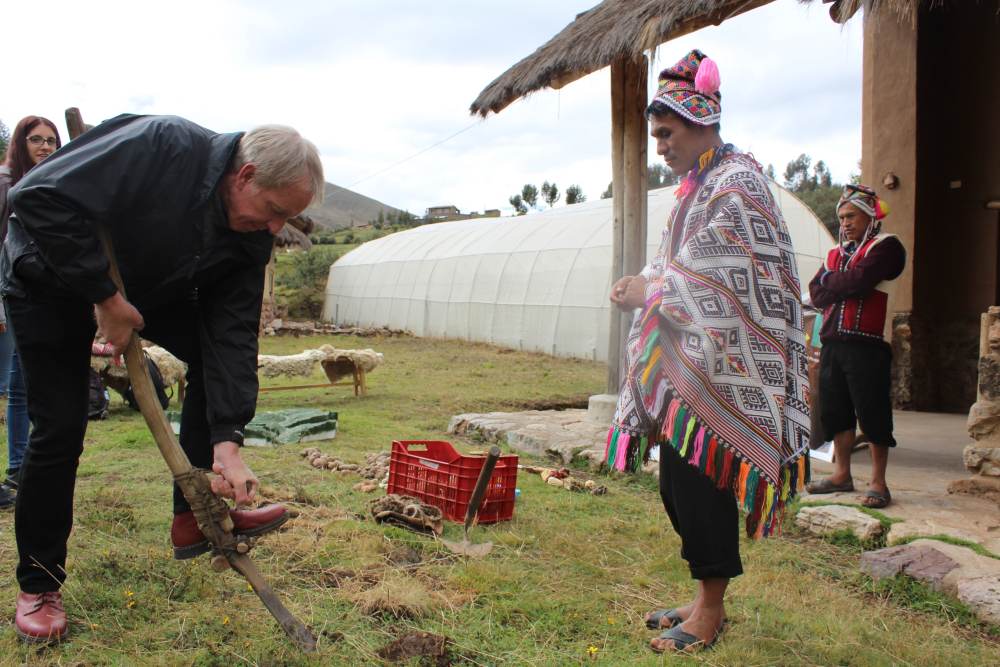 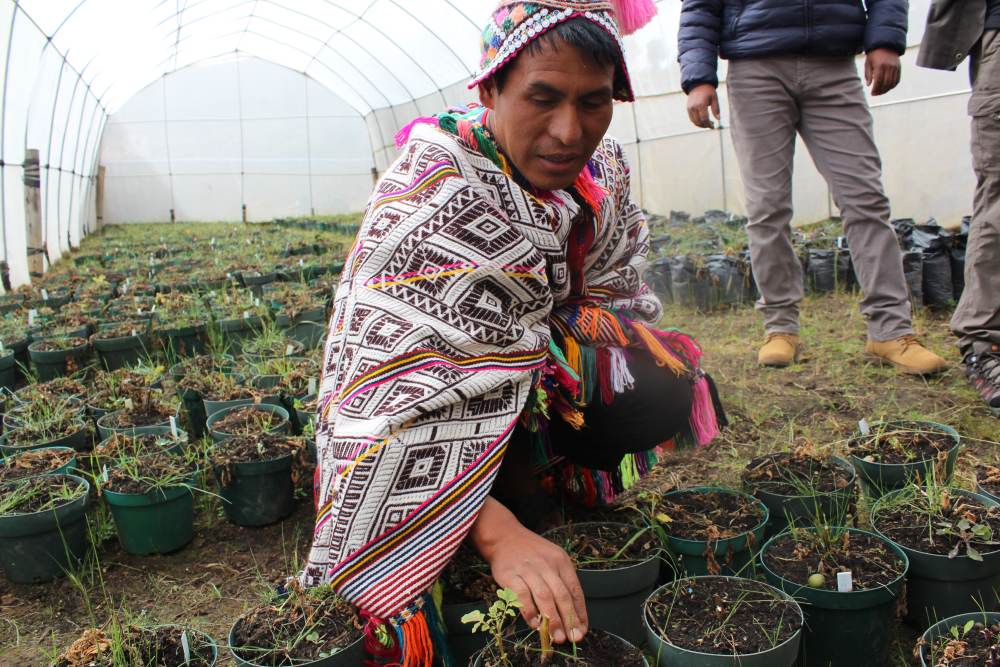 The salt draws the moisture out, and when fried, the skin puffs up to this large size

We left to head back to the hotel and had the rest of the afternoon off. As a class, we went to a local family-run observatory, which was somewhat hidden in the forest. It was definitely amazing to see the stars in the mountains, and I even got to see Mars that night!

The next morning was a “free” day, and I took Professor Flynn up on his offer to take a few students to the Parque de la Papa – known as the “Potato Park.” This was a program where Andean indigenous tribes banded together to preserve the heritage and history of their respective cultures by establishing a seed bank. This bank contained the roughly 2,000 or so varieties of potatoes that were specific to the Andean mountains. They showed us a few of these varieties, and also how they traditionally harvested the potatoes.

Along with the seed bank, one of the elders showed us a greenhouse full of various kinds of potatoes. It was incredible to see the many kinds of potatoes that I would probably never see again. Some were even “freeze-dried” as they had been in the Incan times. With the start of the frost in the morning, the potatoes lost some of their moisture and became hard as a pebble. The elder explained that all one needed to do was put the potato in water to rehydrate it. When times became hard, this was a great way to get the nutrients one needed.

We were given coca tea; viewed some of the beautiful, colorful textiles that were being made right in front of us; and then took a bumpy bus ride down the mountain back to our hotel.