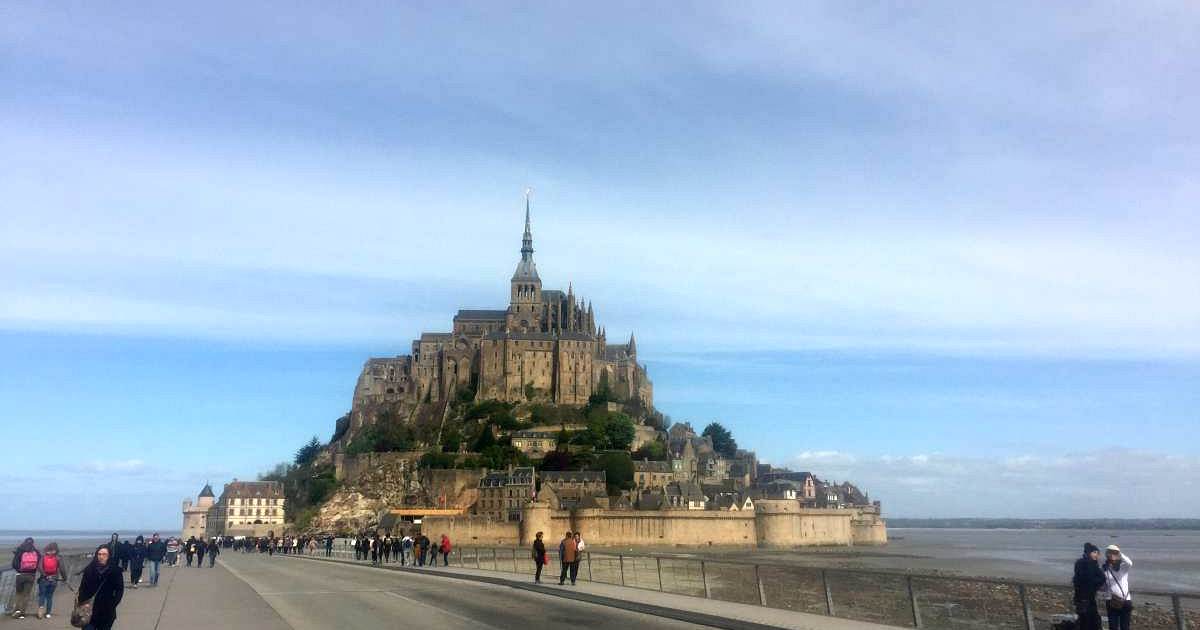 A day in Brittany with Chef Emmanuel Tessier

For the fifth and sixth days in France, our itinerary centered on the region of Brittany, right on the coast, facing Great Britain. On day five, we woke up and had breakfast in our hotel as usual, and then we drove for about 30 minutes to the city of Cancale. Somehow, our bus driver managed to maneuver the bus down winding roads into the parking lot of a youth hostel located right on a rocky beach. My first impression was that the place seemed kind of mystical. I haven’t spent much time around the ocean, and the way that the cliffs rose up around this small inlet of beach struck me as quite beautiful, even if it wasn’t the most picturesque of beaches. 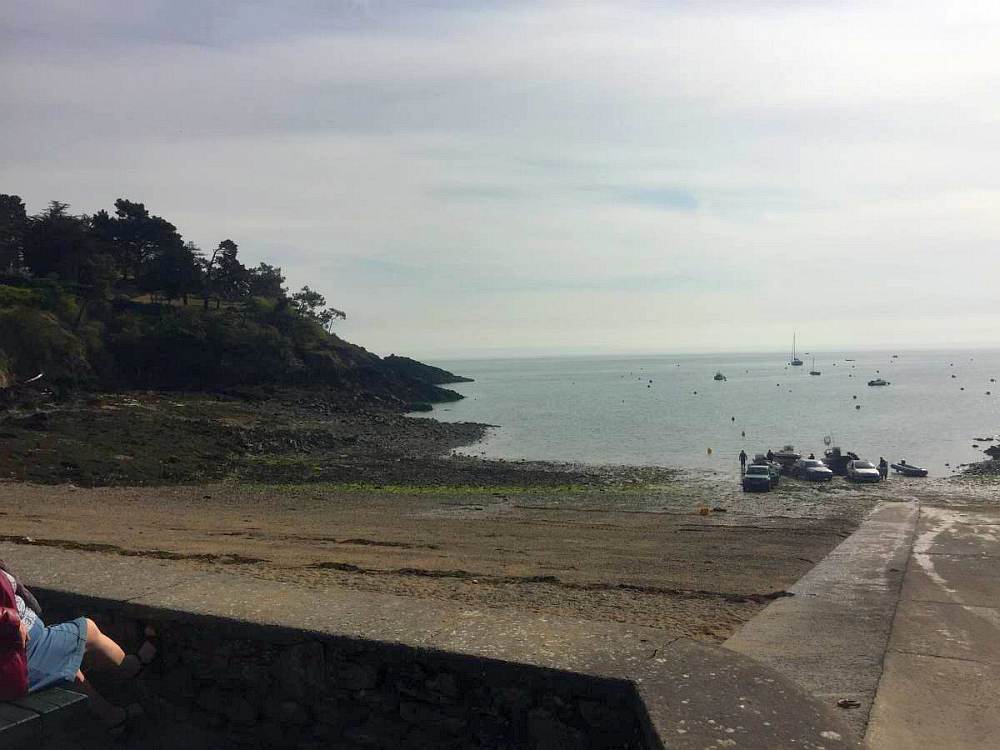 Emmanuel Tessier arrived shortly after we did and immediately started talking about what his food means to him. Tessier previously worked at a three-Michelin star restaurant and is currently the director of the Ecole Cuisine Corsaire. He explained the concept of terroir cooking. In one example he used for terroir cooking he said that the boat he owns that doubles as a restaurant. He not only uses the ingredients available to him, but he puts the guest in the setting where the food came from. My favorite thing that Chef Tessier said on the beach was, “There can be a millionaire and an average man who has saved for this experience when their shoes are off on the boat, they are the same, there is no rich and poor.”

After his short speech, we started our foraging walk with him on the beach. He explained that foraging is less about the food itself and more about being completely authentic to the environment and what is available. Directly on the beach, we “found” two edible plants Chef Tessier has been returning to for quite some time to harvest. One of them was called Christe Marine, and it tasted both briny and citrusy, and like a raw, over-matured carrot. The next was Pourpier Marron, which actually translates to brown purslane. In my opinion, it tasted like pre-salted spinach. We left the beach and walked into the woods nearby where we picked two more herbs that Chef Tessier was quite familiar with—Venus’ belly button, and sorrel. Venus’ belly button tasted like a combination between jicama and spinach. Sorrel is just as citrusy and delicious as it is in the states. As we left, we were promised that we would discover these ingredients on our dinner plates later in the evening. 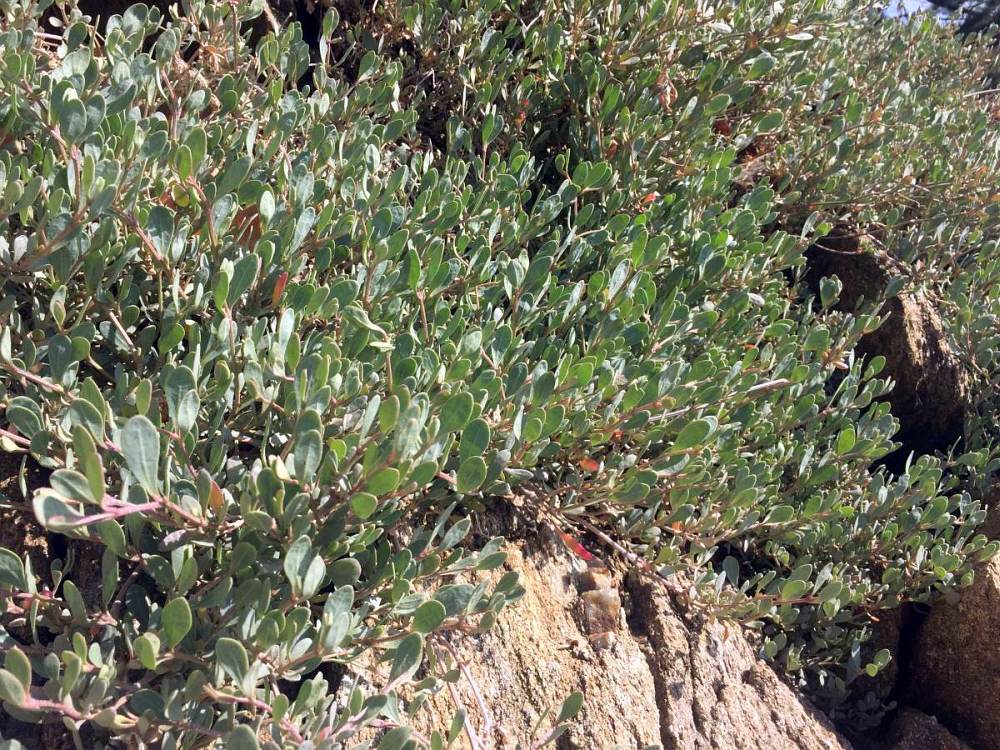 Next, we went with Chef Tessier to his fish purveyor where he bought lobsters and crabs. While we were there we got to see a variety of species that are unavailable in the U.S. Some of these were “Sleepy Crabs,” snails, European lobsters, and tons more. Next, we followed chef Tessier to a beautiful château where many chefs collaborate on creating a bio-diverse growing area for food. He explained that parts of the property aren’t mowed in order to encourage biodiversity. We went on a short walk around the property, and I hate to admit, I didn’t listen too much of what he said at this time because I was busy in my own head thinking about how beautiful this place was. After the walk, we stayed at the edge of the beach and ate what many in the group are calling,” a Michelin-starred picnic.” The care and attention that went into everything in the basket were impeccable. The chef served us grape tomatoes, each individually peeled, served in a light vinaigrette; “sailor cooking” vegetables preserved in salt and curry served with a hardboiled egg; vodka and mackerel rillettes; and a ham and butter sandwich. For our cheese course, there was Camembert with chutney. And finally, for dessert, we had fruit salad, a curry and lemon macaron, and crème café. I consider this meal to be one of my favorite of the trip; not only because of the food, but because of the setting. Eating food inspired by the region while looking out over a stretch of beach comprised solely of seashells was absolutely incredible.

Immediately following lunch, we visited an aquaculture farm for an hour, and then met up with Chef Tessier at La Malouinière de la Ville Bague, a private home that is often rented out for events. The owner was gracious enough to show us around her beautiful house, and explain the history of every antique inside. After the tour, we got the chance to cook with Chef Tessier and his sous chef. Together, we prepared the lobster dish that earned him one of his stars. He shared tips and tricks for making it absolutely perfect. Specifically, when the lobsters are added to the boiling water, the water must come back up to a boil within two minutes, if it doesn’t you have failed. Then we had a quick lesson in quenelling. After the lesson, we sat down to eat what we had made—lobster with a sherry and vanilla reduction sauce and duck breast. We ended our evening with a boisterous and music-filled bus ride home. 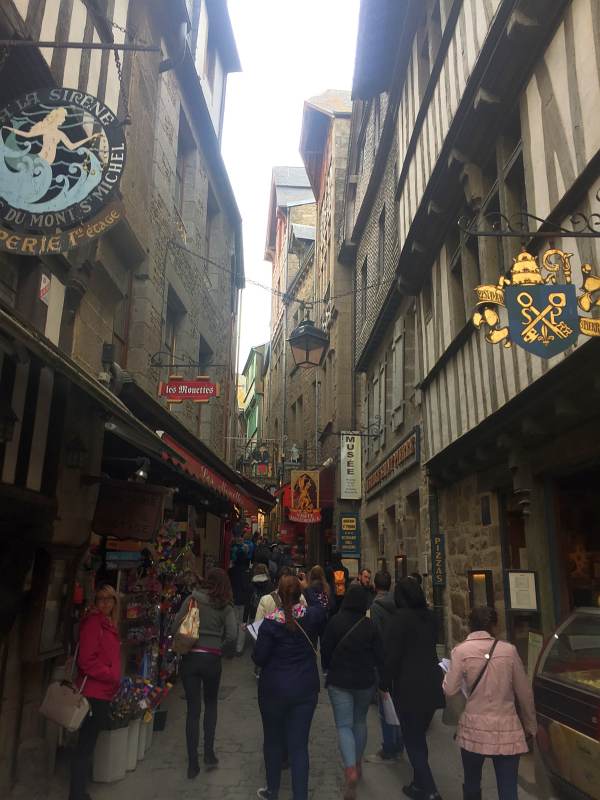 The next morning we visited the famous 11th century Abbey, Le Mont Saint-Michel. The walk up to the Abbey is a street lined with tourist-trap shops, but once we got to the top and started looking around, it became clear why UNESCO named it a world heritage site in 1979. While inside, you can actually feel the historic energy attached to it. While it’s a beautiful structure on its own, standing inside one of the many rooms and understanding that it has stood for almost 1,300 years is a humbling experience. After the Abbey, we stopped for lunch at Auberge de Selune and continued to our next destination: Normandy.