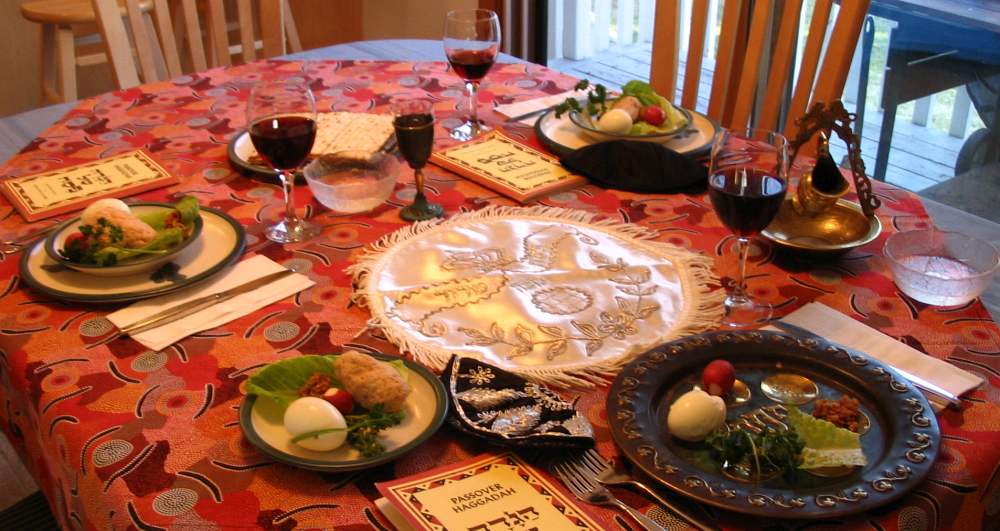 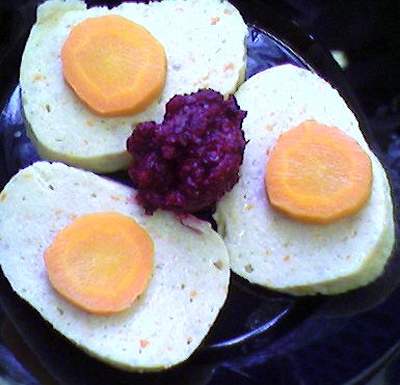 Serves 8 as a first course

To make the poaching liquid:

Combine all the poaching liquid ingredients in a large pot. Bring to a gentle simmer over medium-low heat. Simmer for 10 to 15 minutes.

Cook the gefilte fish until all the dumplings float to the liquid’s surface, about 10 to 12 minutes. Remove the pan from heat and let the dumplings cool in their poaching liquid for 30 minutes at room temperature. Refrigerate until the broth has jelled, about 4 hours or overnight. 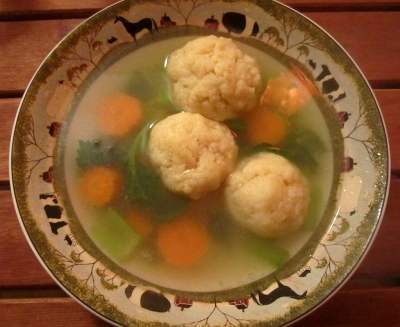 Serves 8 as a soup course

Combine the matzo meal, eggs, water, salt, and pepper in a food processor. Process for 15 to 20 seconds. Add the chicken fat and pulse just until the fat is incorporated. Transfer to a bowl, cover, and refrigerate for 20 to 30 minutes.

Bring a pot of lightly salted water to a simmer over low heat. Wet your hands and form the matzo mixture into balls about 2 inches in diameter. (For Knaidlach mit Neshomes, see Chef’s Tips below.) Gently drop the balls into the simmering water. Cover the pot and simmer for 20 minutes, or until firm and cooked through.

Meanwhile, bring the chicken broth to a simmer in a large saucepan. Season with salt and pepper. When the matzo balls are cooked, transfer them with a slotted spoon to warmed soup plates or bowls. Ladle the hot broth onto the matzo balls, garnish if you like, and serve.

To make Knaidlach mit Neshomes (Matzo Balls with a Surprise), form the matzo balls around a bit of browned onion or chicken cracklings.

Combine all of the ingredients in a small nonreactive pan and simmer gently over medium heat for about 15 to 20 minutes, or until all the liquid has been absorbed. Chill well before serving.

Chef’s Tip: Beet preserves may be made up to 3 days in advance. To hold them, put them in a clean container, cover and refrigerate.

The recipes are copyright The Culinary Institute of America, with thanks to Chef Morey Kanner, associate professor of culinary arts.