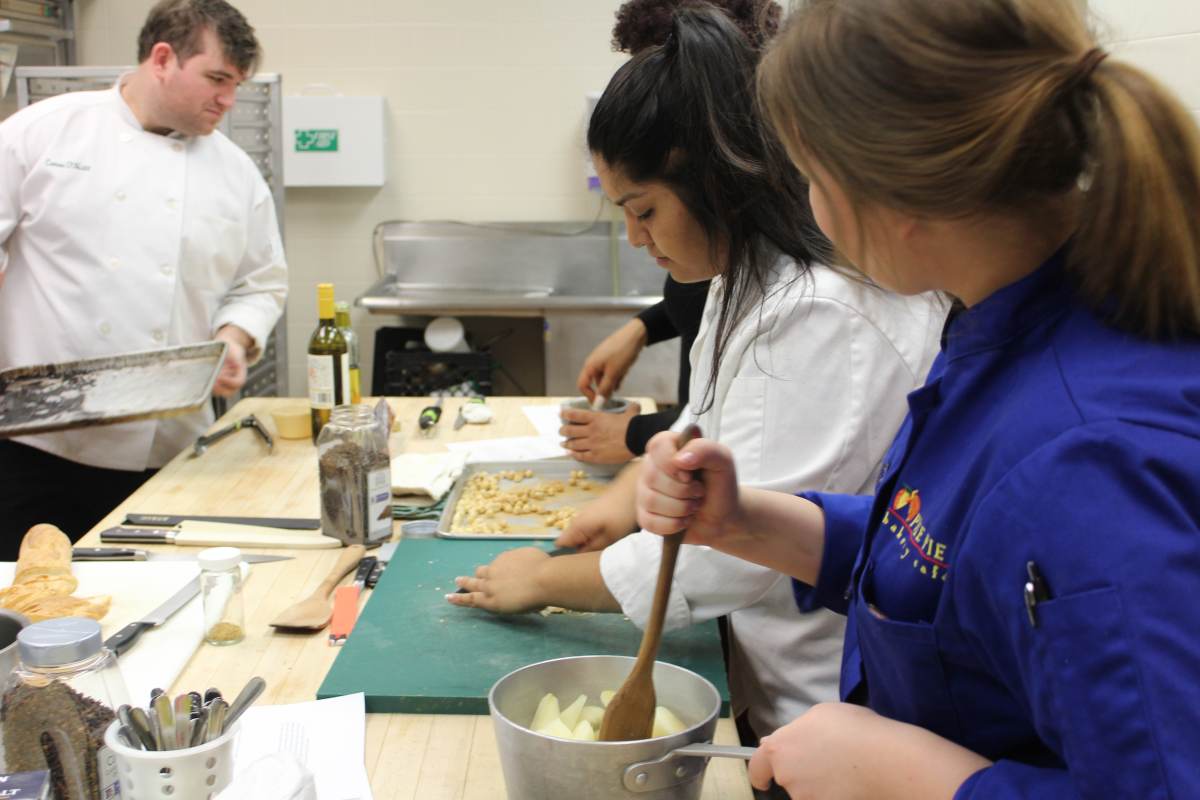 Food History, taught by Dr. Beth Forrest, focuses on breaking down the many broad topics related to the political, economic, and cultural shifts which have influenced food throughout the centuries. In each class, we focused on a few scholarly readings. We start with a student-led class discussion related to the readings of the day and end with an informative and thoughtful lecture led by Dr. Forrest on the larger abstract concepts of food history itself.

The last few classes, we’ve been discussing the importance of food during medieval times. Our classroom discussions have revolved around the influence of grain as a critical element of social structure and the importance of food in medieval religion. After discussing these concepts and thoroughly analyzing them, it was only a matter of time before we ended up integrating our serious love of food with the lessons we learned in class in a way that made the most sense to us as trained cooks; we would soon be re-creating medieval recipes in one of the kitchens here on campus.

Arriving to the kitchen behind the Danny Kaye Theatre in the library, Dr. Forrest handed out sheets with different recipes on them. At first glance, it seemed that each recipe had significant typos. However, we soon understood that these recipes were copies of the original texts, with most dating back many centuries.

We were told to interpret them to the best of our ability. However, this meant following them extremely precisely, word for word. It really made us think about the challenges that these kitchens must have faced! We soon realized that certain spices must have been hard to come by, and a lot of manual labor was certainly involved before the invention of certain kitchen machinery and tools to make the cooking process easier. One student in the class spent nearly an hour and a half chopping hazelnuts by hand, and grinding them in a mortar and pestle to a fine consistency. Mortar and pestles were in constant use throughout the kitchen! 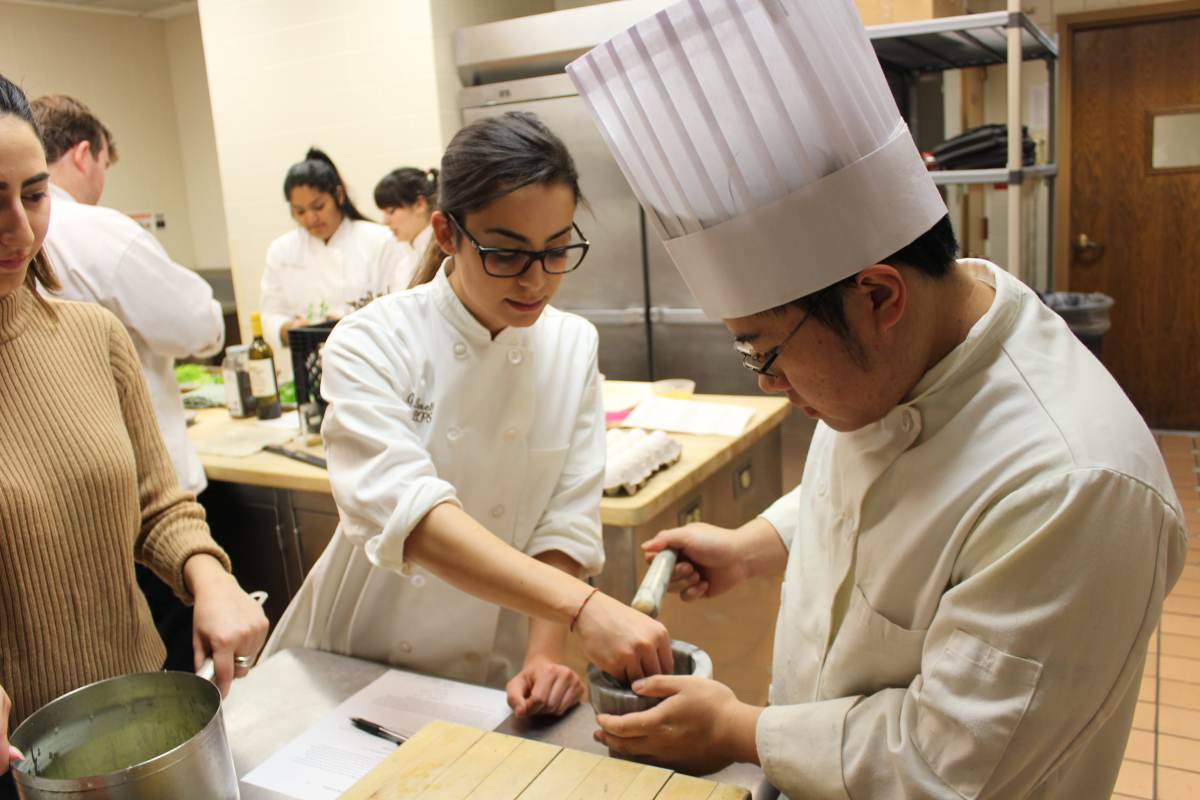 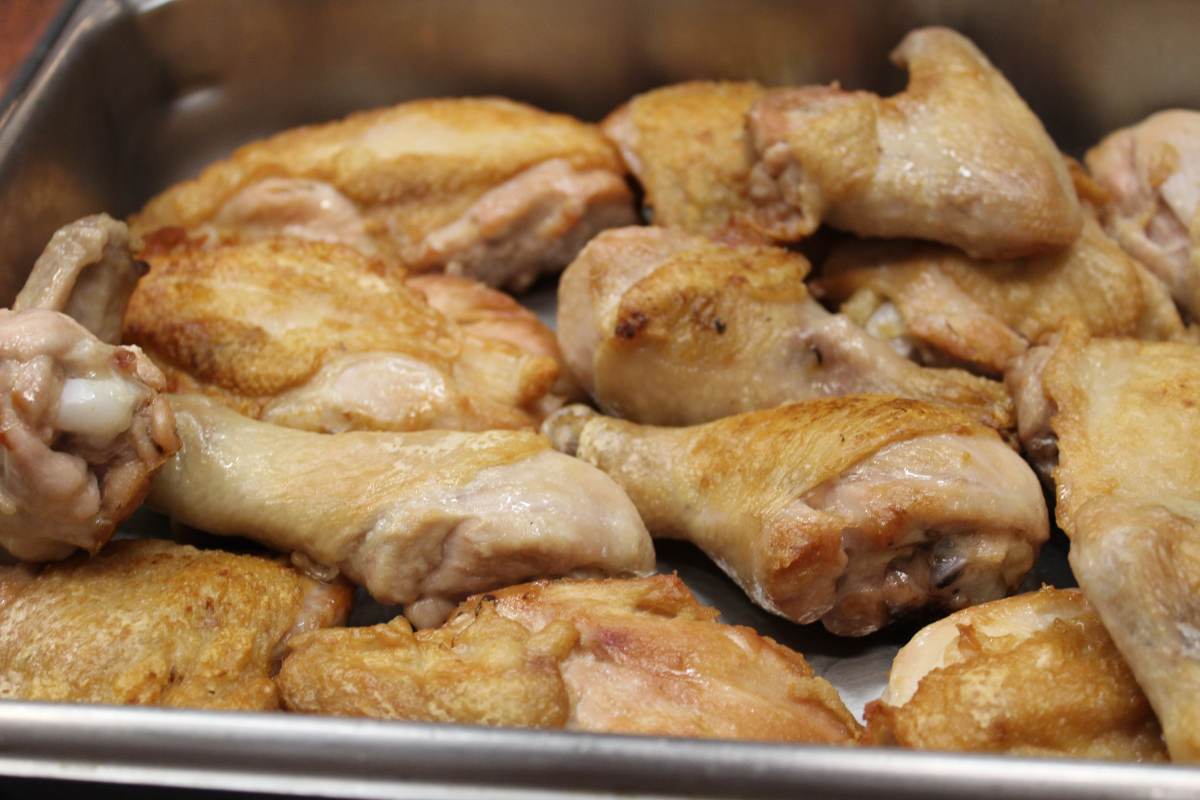 One group created a chicken dish. This was served with a “green sauce,” which consisted of parsley that was dried in the oven, cinnamon, ginger, cloves, and the infamous toasted and ground hazelnuts. 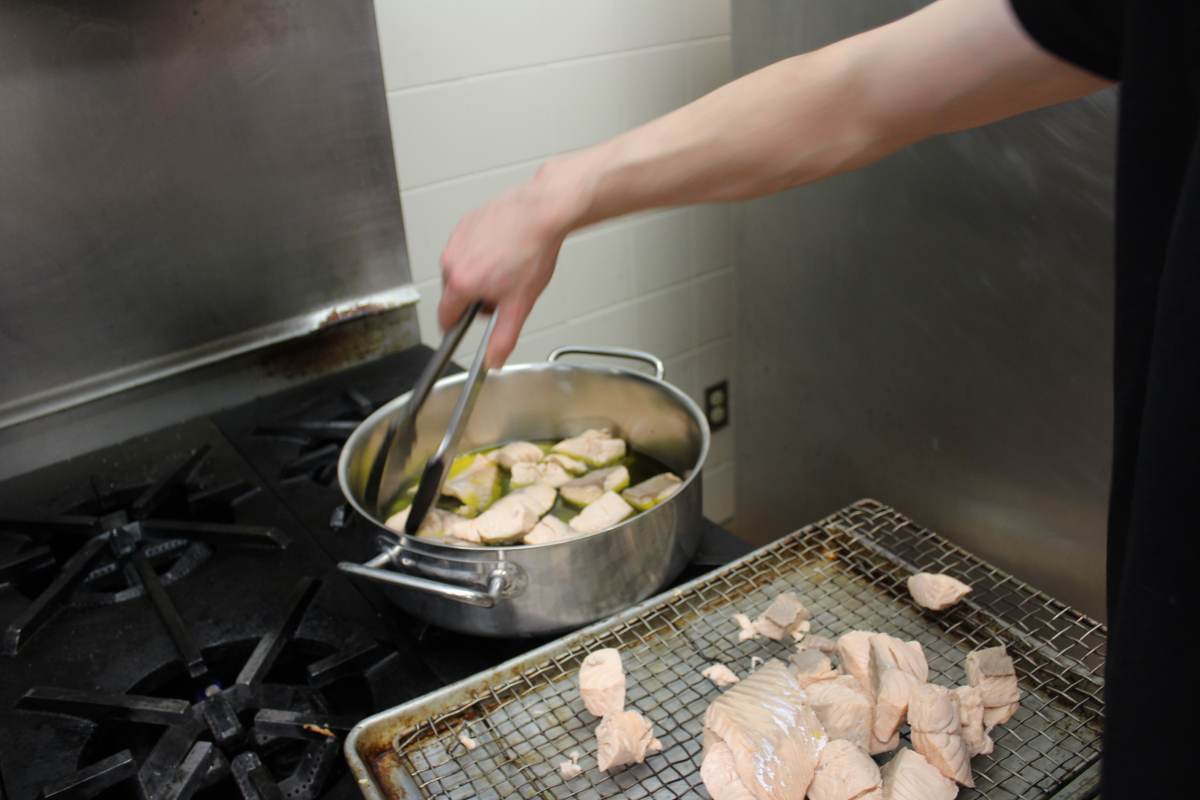 al-Andalus used to do.” That involved poaching salmon and then frying it in plain oil. 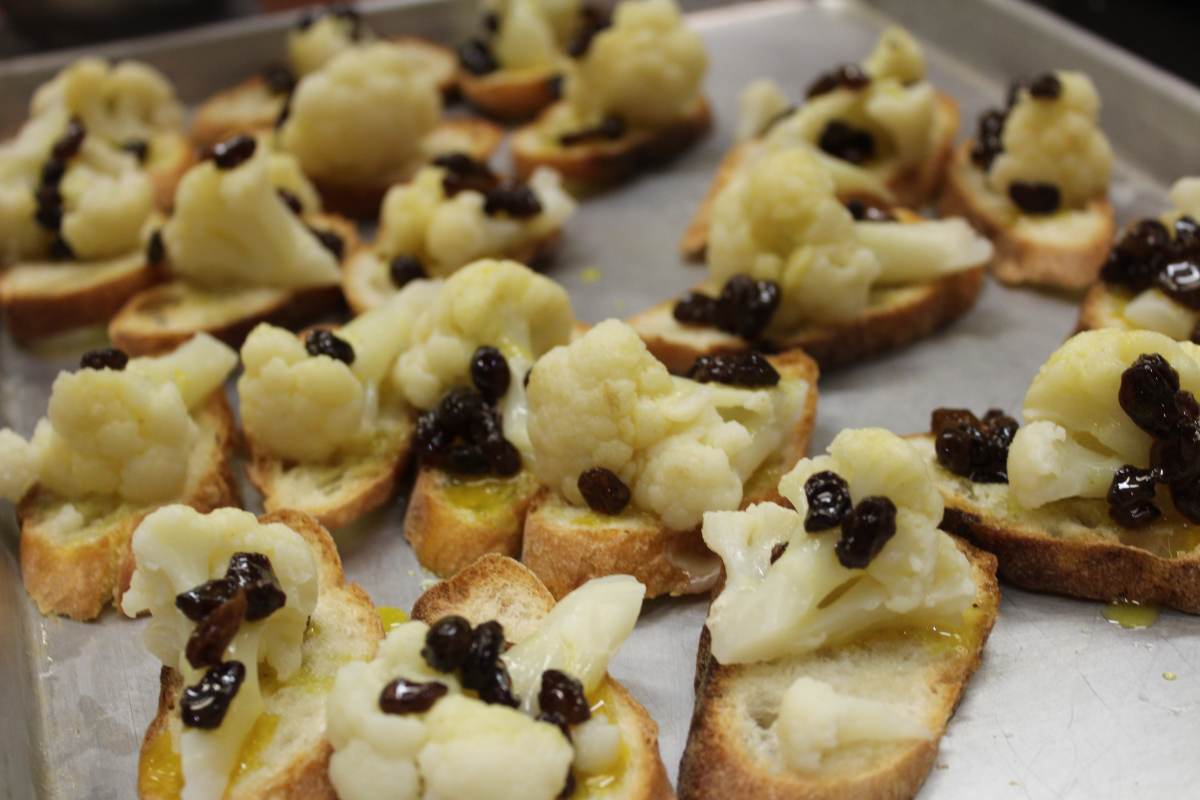 A canape of sorts was made with poached cauliflower in milk, “carved sippets” (sliced bread), and were topped with raisins that had been combined with butter, sugar, and an egg yolk. 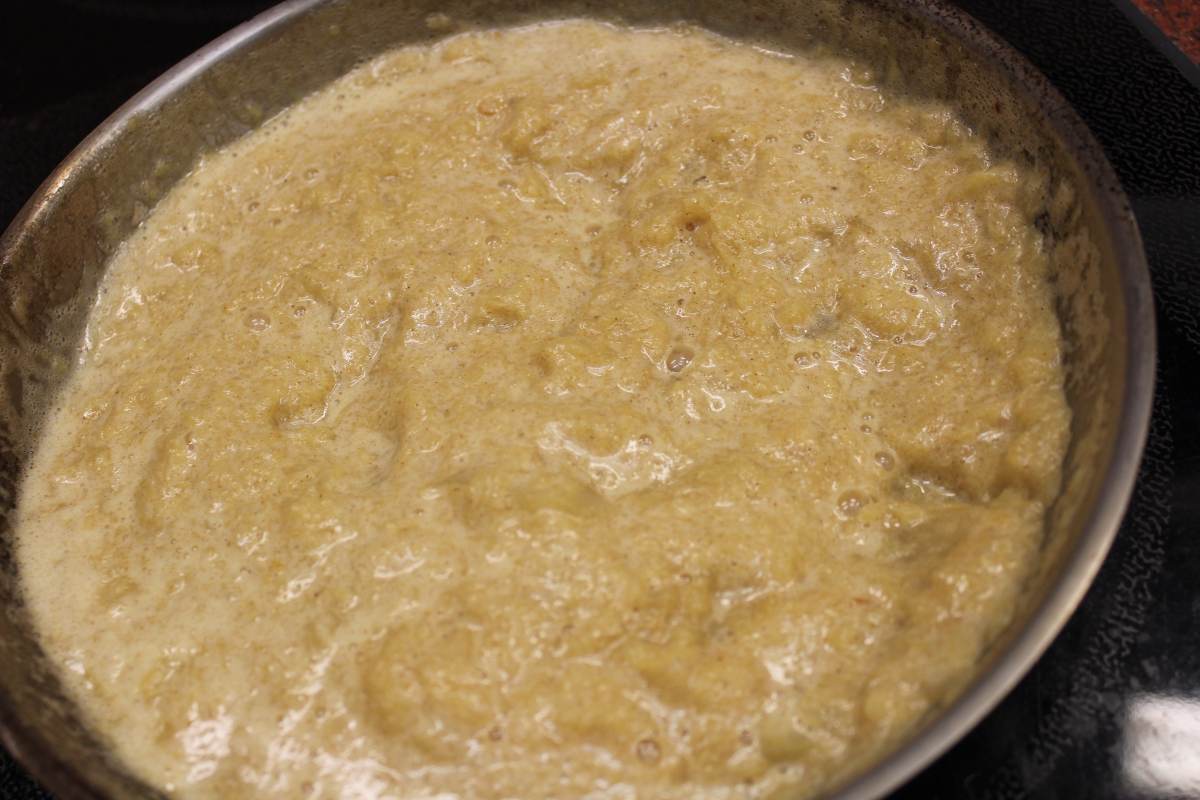 My team was in charge of making the poached pear dessert. We got the pears going in wine, and according to the recipe, we were to “hit forth in maner of Ryse.” That meant we were to grind the softened pears to a rice-like consistency. We then seasoned the mixture with ginger, cinnamon, and sugar. Tempering the egg yolks into the warm mixture, it all began to thicken with the residual heat left from the poaching process, and our dish was complete. 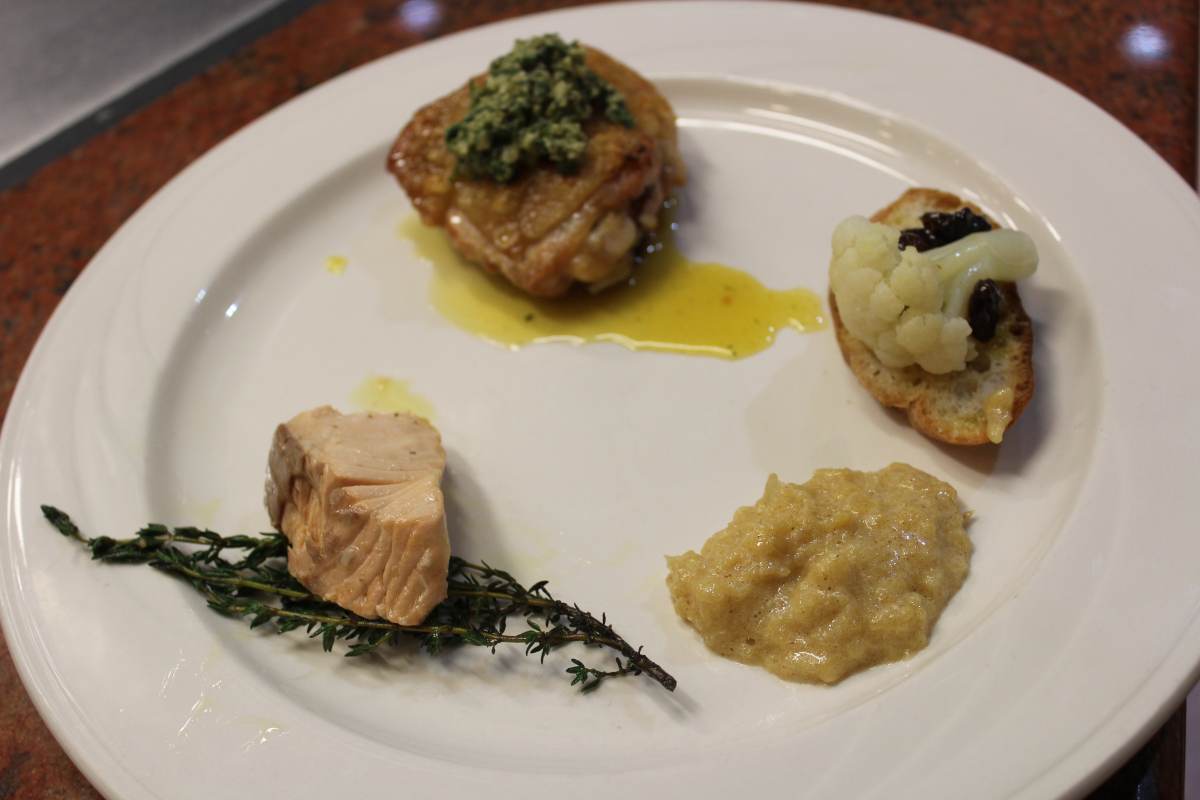 We took a second to appreciate the hard work our class did, and then dug in to the bountiful spread. While we ate, Dr. Forrest explained how our interpretations of food were related to how food historians interpreted—using various methods of research—interpreted them. It’s clear that no single group of students will interpret these recipes in the same way and no single theory is precisely set in stone. We are constantly encouraged to discuss, criticize, and research outside sources to challenge the theories and hypotheses presented in class. Personally, it helped me understand the complexity involved in food history. This activity, while tasty, was an excellent way to help bridge our classroom discussions through real-world application.

On another note. Although we have incredible discussions in during class, it felt wonderful to step back into a kitchen. By combining what we are discovering in class with the practical skills we learned during our years in the AOS program, we continue to further our understanding of the complexity of food.

Latest posts by Dan Salisbury (see all)
« Inside the Culinary Science Kitchen: “Culture” Yourself » Science is Delicious: Developing My Project