In Ancient Foods in the Modern World: Latin America with Dr. Maureen Costura, we cover a range of topics centered around the history ancient cities and lands in the “New World.” We learn about the impact of certain ancient cultures on society today—covering everything from colonialism to the importance of certain ingredients in rituals. There is a huge emphasis on relating all of the topics back to ingredients that we see in our own world.

One ingredient that is receiving a lot of attention in the modern world is amaranth. With its many amazing health benefits which include cholesterol-lowering phytosterols,  high protein content, and anti-inflammatory properties, amaranth is a versatile grain that was highly symbolic for the Aztecs. The Aztecs revered many gods, but one of the most important being Huitzilopochtl. The patron saint of the capital city of the Aztec empire Tenochtitilan, Huitzlopochtl was a god revered for war, sun, and is perhaps most infamously, the god of human sacrifice. The Aztecs often made a snack called alegria from amaranth and human blood in order to honor Huitzlopochtl. A common Mexican treat today, alegria treats are more or less an ancient Rice Krispy treats; resembling the common snack food, the two main ingredients are simply popped amaranth and honey—no blood!. Using agave and peanut oil as a substitution for obvious reasons, we were going to make our own very own alegria.

The first step was to harvest the actual amaranth. The Teaching Garden at the school is located right outside of Rosenthal Hall (Rosie) and on the walkway leading to the Egg. 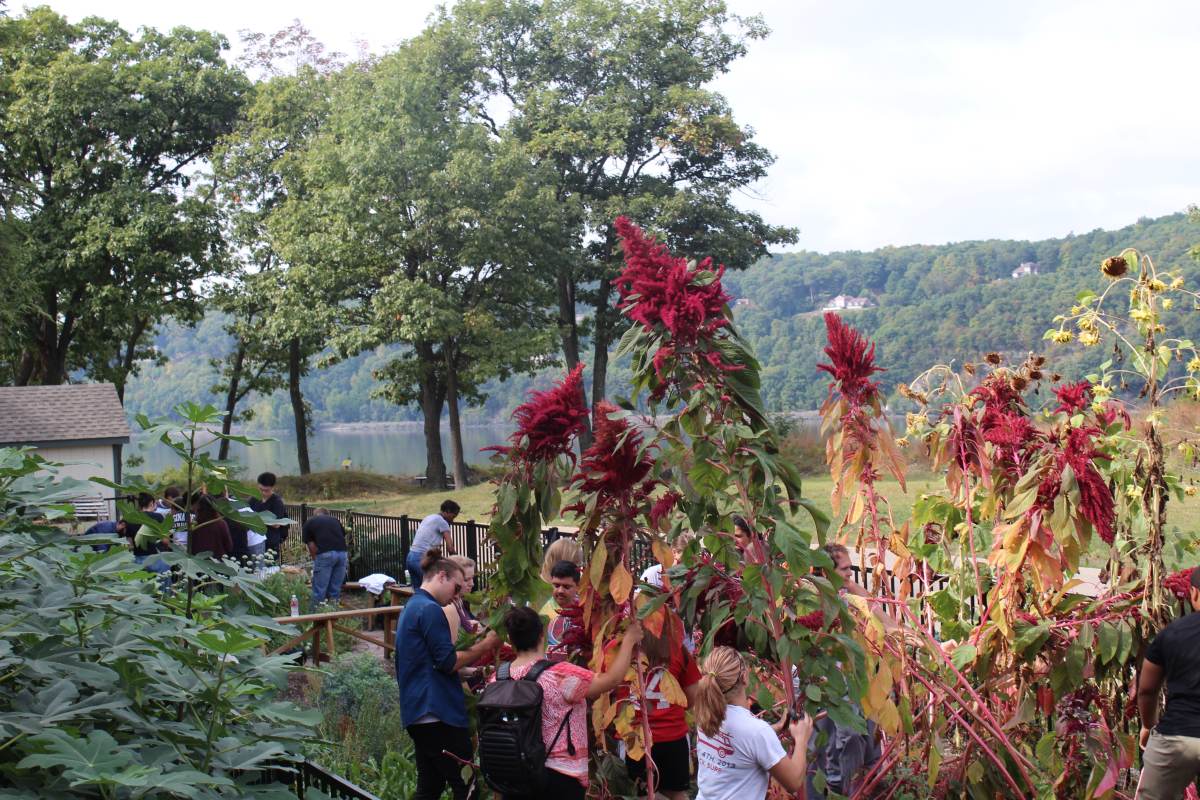 The color on the plant was beautiful before it was heated. 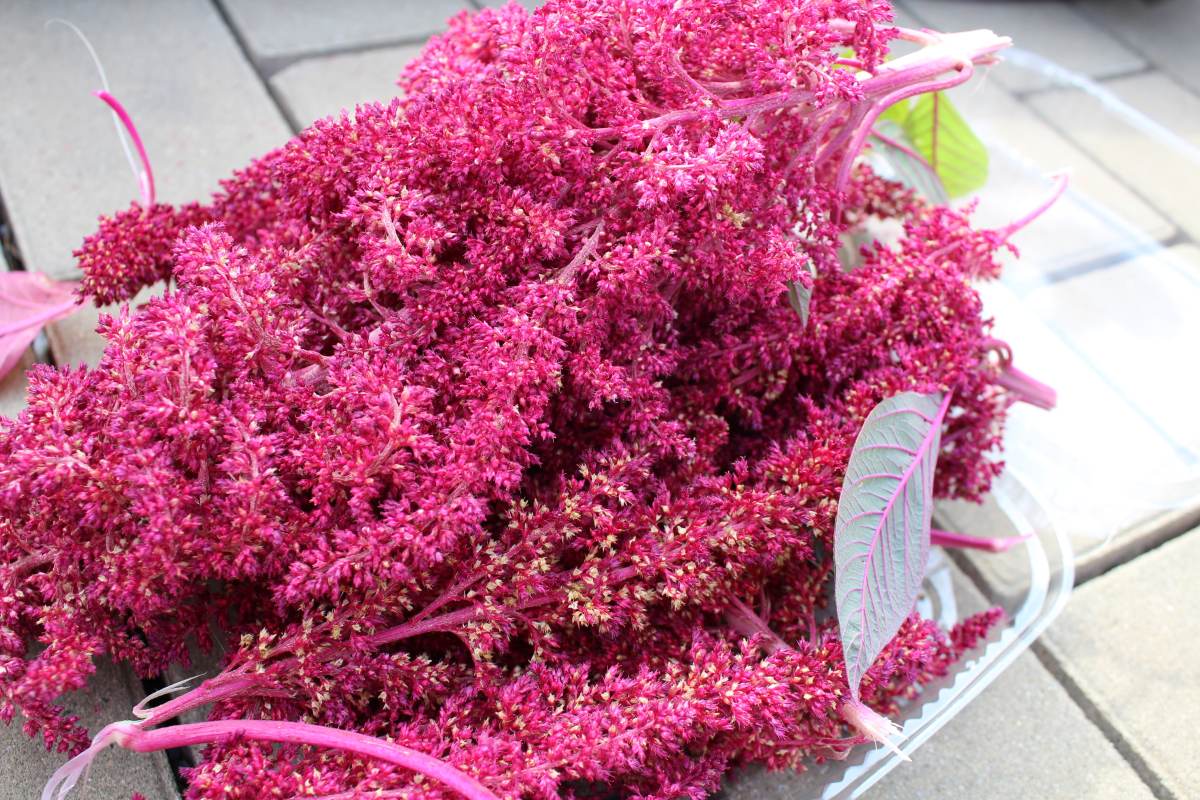 The trick to harvesting the seeds from the amaranth was to roll it between your fingers. 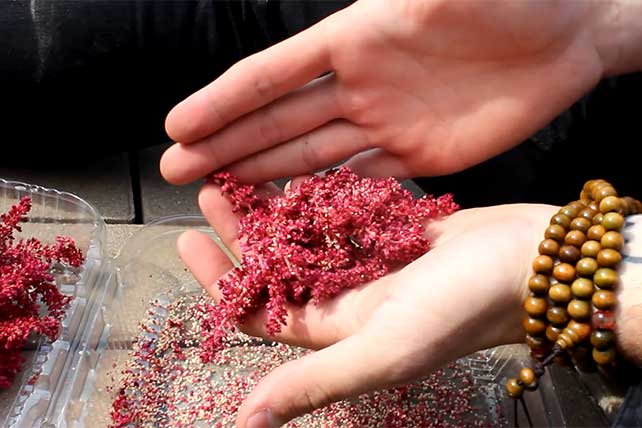 We then sifted out the seeds from the flowers, and stored it for later use. A couple of classes later, we were in the K-1 kitchen downstairs, some of us donning chef whites for the first time in a long while. We were ready to get cooking. The first step was to pop the alegria using a dry pan and high heat. 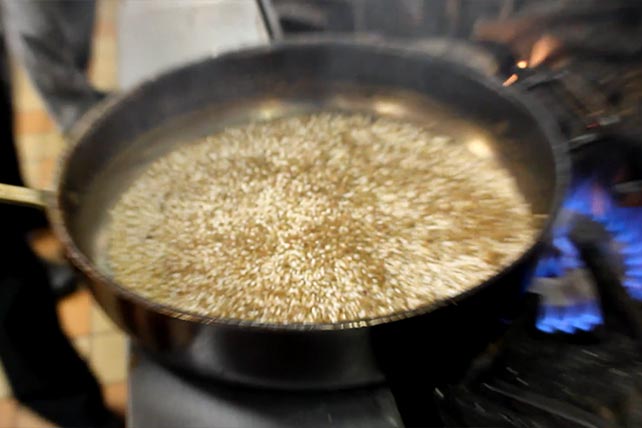 Next, we added a syrup of honey, peanut oil, and agave and stirred that into the popped grain. 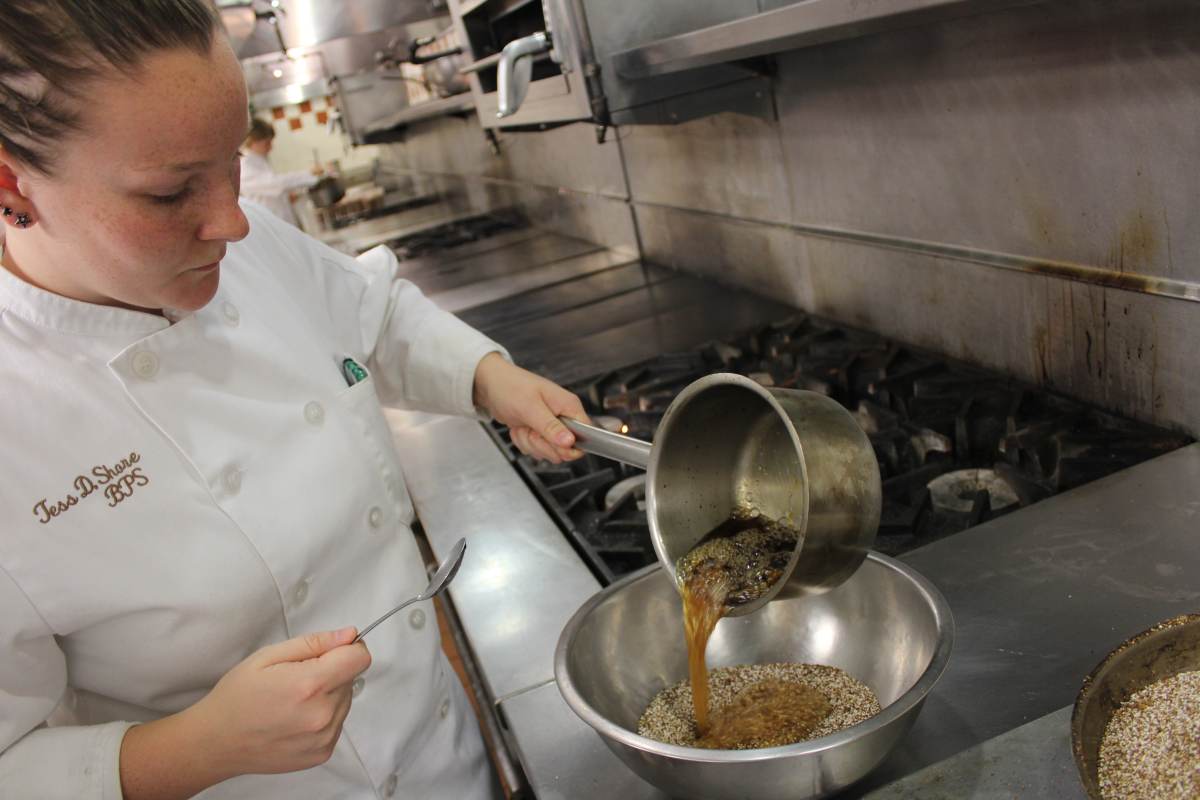 We folded in seeds, chocolate, and some dried fruit. 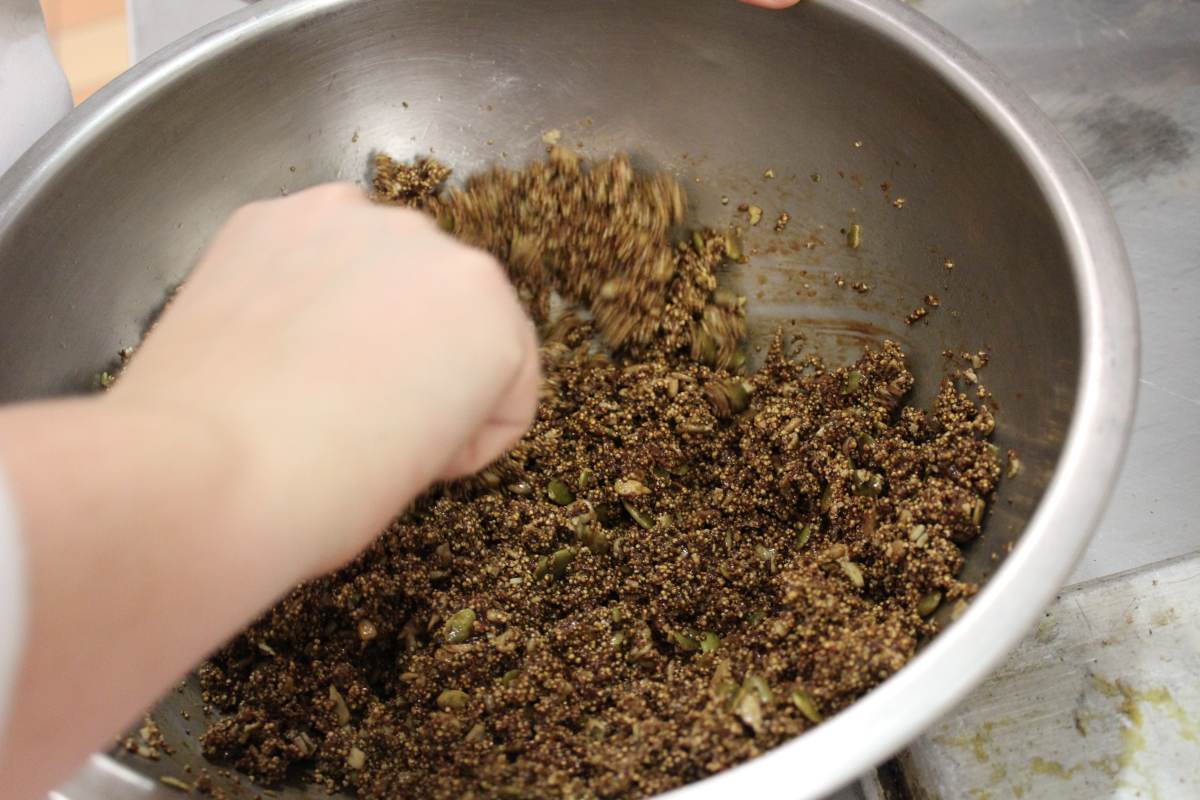 Once it was cool enough to handle we formed it into bars and rounded shapes. Then we got to play! 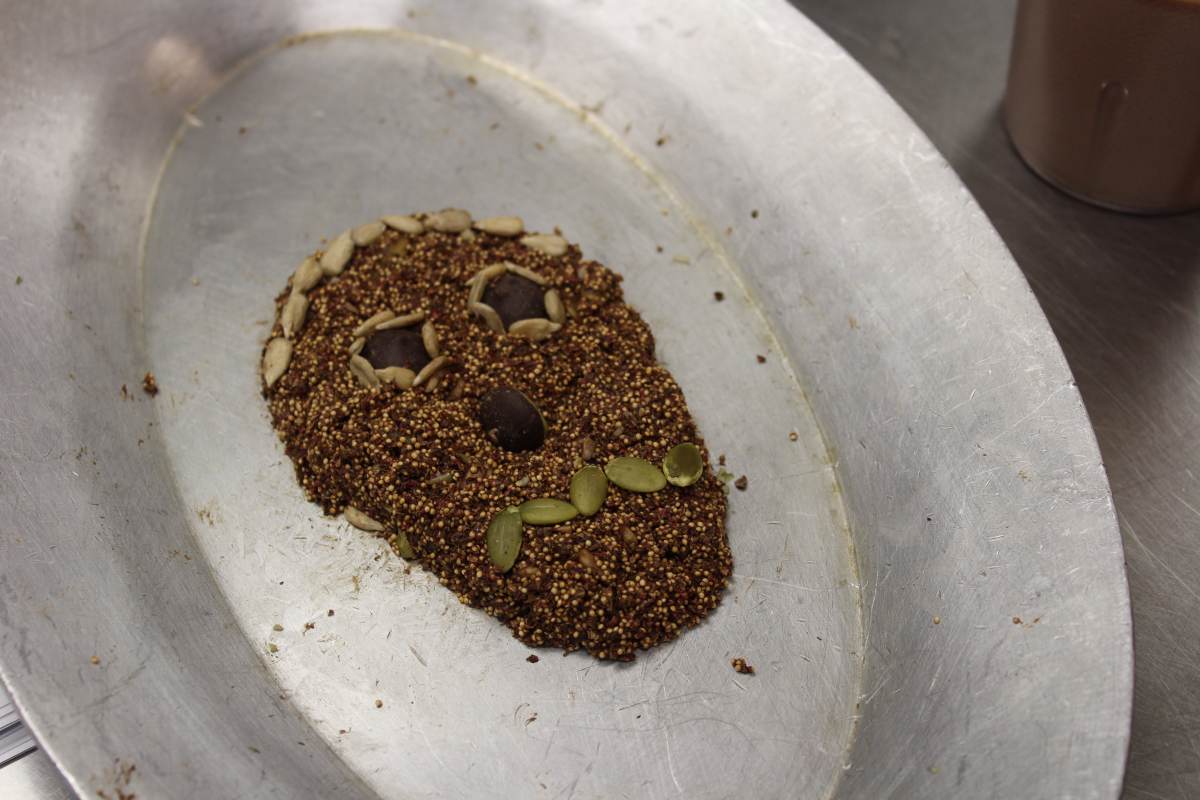 Standing over the finished alegria, we were all pretty proud of what we had accomplished.

Putting the amaranth into an historical context and understanding its cultural significance made this hands-on activity even more engaging for us students. It’s one thing to harvest a plant and have a finished product in front of you; it’s another to relate it back to the lessons in the classroom and be able to eat a piece of ancient culture! It’s just one of the many fun activities I get to take part in as part of the Applied Food Studies major here at the CIA. 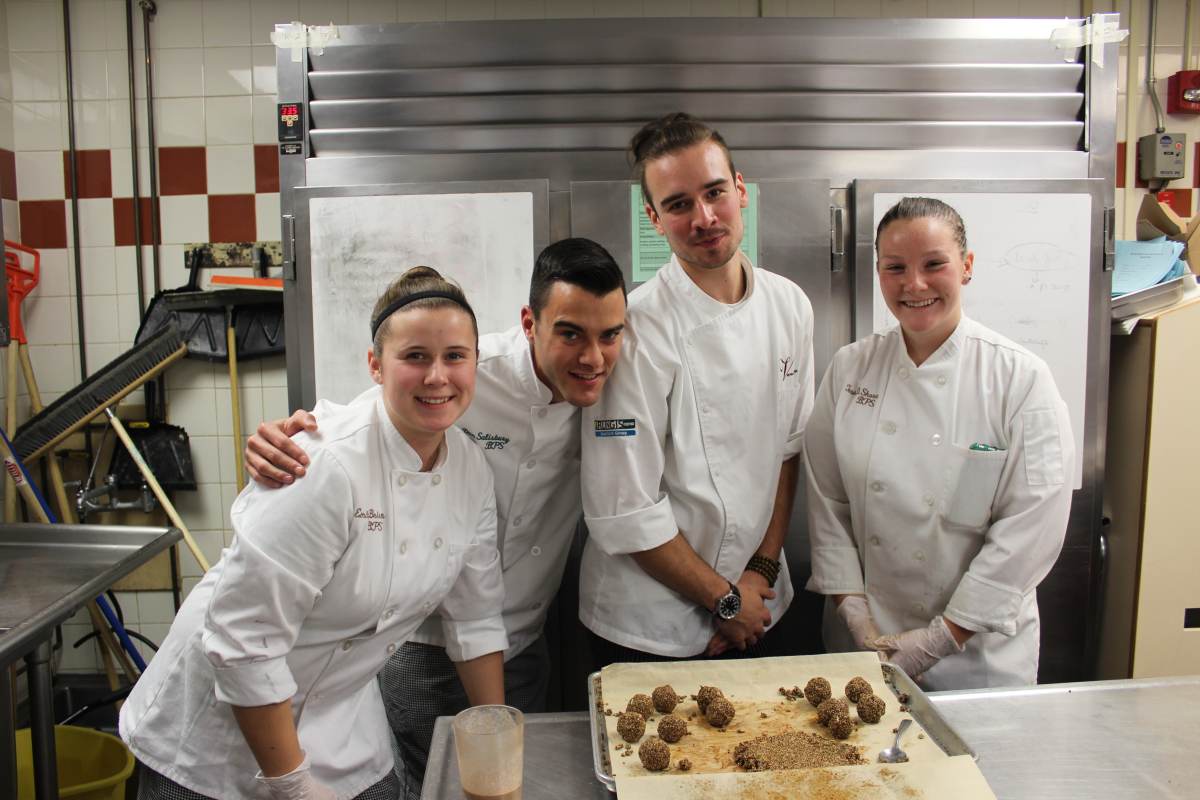