FLAVOR: Coming to Our Senses 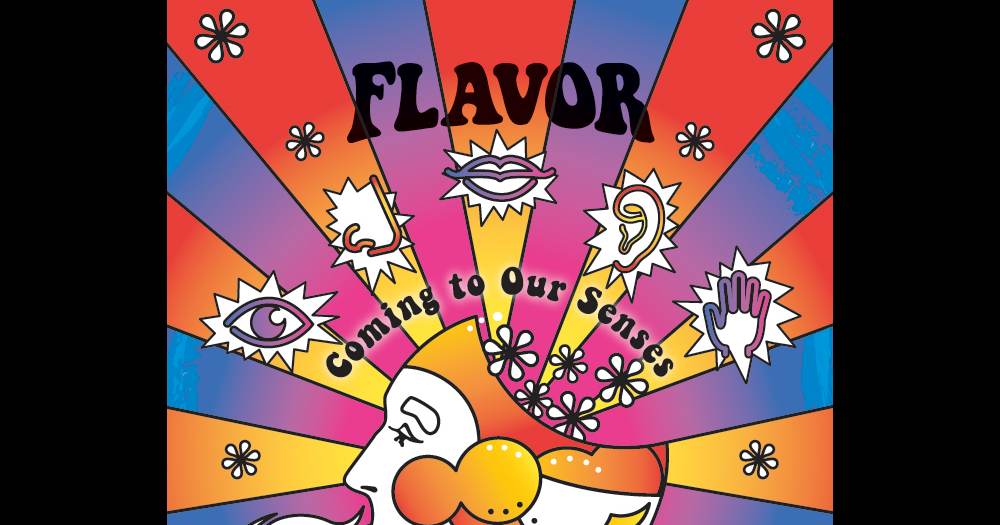 Most everyone grew up with the idea that the tongue was the central hub of flavor. We believed that taste buds sensitive to sweet, sour, salty, and bitter resided in specific areas of the tongue. We now know these elements and their new friend umami can be recorded all over the tongue and the inner walls of the cheek. When tastants, the chemicals in foods, are registered in the mouth, signals are sent along nerve fibers to the cranial nerve and then on to the taste region identified in the brainstem. From there the news travels along to a specific area of the cerebral cortex. It only takes a split second for that to happen, and voilà, you know what you are tasting. But wait, that’s taste, not flavor.

The Science of Flavor

Flavor is a complex element that requires all of the senses and an understanding of neuroscience, biology, psychology, and memory to define it. The first inroads into this idea came from Gordon M. Shepherd, a physiologist and professor in the neuroscience department of Yale University School of Medicine. In an article he authored for the scientific journal Nature in 2006, he coined the term “neurogastronomy.” This new science brings together molecular biologists, neuroscientists, psychologists, physicians, and chefs to study the implications of a sensory approach to flavor and how we perceive it. Shepherd focused his work on the study of how the sense of smell and neurological circuits in the brain team up to contribute to the perception of flavor.

Dr. Shepherd’s research divided the sense of smell and its importance in perceiving flavor into two parts—the orthonasal and retronasal systems. The orthonasal system refers to the inhalation of external odors, while the retronasal system is activated by the food we are chewing and swallowing and is found at the back of the nasal cavity. So, though strong cheese on a plate may smell to you like dirty socks, when in the mouth, that same cheese may evoke words like “tangy, milky, grassy, or nutty.” Wine aficionados have used the retronasal sense of smell for years in evaluating wines. They use words like “oak, leather, or wood” when describing the finish of a wine. As far back as 1835, Jean Anthelme Brillat-Savarin was on to something when he said, “Smell and taste are in fact but a single sense whose laboratory is in the mouth and whose chimney is in the nose.”

A Trick of the Eye

It has been said many times that we eat with our eyes first. Most will agree that a beautifully plated dish will send off signals to the brain that pleasure awaits. However, the brain can be tricked. Studies have been conducted since the mid-1970s regarding how the perception of color affects taste expectations. Scientists and chefs have figured out that it is possible to reduce the concentration of the less healthy ingredients in a dish, like sugar, by simply changing the color of the food and tricking the brain. In one study, when yellow color was introduced into a clear, sweet solution, it significantly decreased people’s sensitivity to sweetness. When green color was introduced to the same solution it increased their perceived sense of sweetness. Color can even hold sway over a person’s identification of flavor. For example, a cherry-flavored drink can be misperceived as having a lemon-lime flavor when presented as a green-colored drink. For chefs, this visual trickery can add to the delight of a meal. For the medical profession, it may offer applications in the treatment of obesity and eating disorders.

Playing It By Ear

In the kitchen, chefs rely on their ears to guide them when creating a dish. Sizzle and snap can indicate different levels of doneness and caramelization. But using the customers’ sense of hearing to enhance flavor expectations wasn’t given all that much attention. We may all remember the drama and heat of the sizzling fajita dish being set on our table. But the use of sound to enhance dining experience was not the norm until recently. In his 2010 article in Kitchen as Laboratory, Charles Spence from the Oxford University Crossmodal Research Laboratory explored the contributions of sound to the pleasurable experience while eating and drinking. Spence went on to work with award-winning chef Heston Blumenthal, owner of The Fat Duck in England, to test out two hypotheses.

First, they served bacon and egg ice cream to two groups. While they ate, one group heard the sounds of chickens clucking and the other group heard bacon sizzling. Although the ice cream was identical, participants reported the bacon flavor was more pronounced when hearing the bacon sizzle and the eggy quality of the ice cream was more pronounced when chicken sounds were played. Their second experiment noted that oysters presented in a shell accompanied by sounds of the sea were rated as more enjoyable than oysters served in a petri dish while farmyard noises played in the background. These experiments informed Blumenthal’s “Sound of the Sea” dish that he offers at his restaurant. It includes seafood, kelp, and seaweed, plated to resemble the seashore. Waiters bring out the dish and a small iPod nestled inside a giant conch shell. Ear buds for each diner allow them to hear the sounds of seagulls and ocean waves as they dine. Blumenthal has perfectly mastered the senses of sound, sight, smell, and taste, while banking on his customers’ sense memories of times by the sea.

According to Charles Spence in his book The Perfect Meal, the role of the senses in flavor perception can be divided into two groupings: the external cues of hearing, vision, and orthonasal olfaction; and the internal cues of retronasal olfaction, mouth sensations, and sounds in the mouth. The external cues play an enormous role in our food memories, which are particularly evocative and remain stored in the brain. They inform our expectations of what we are about to eat and can impede or enhance our enjoyment of a meal. “It smells just like grandma’s chicken pot pie, but when I bit into it, well, it just wasn’t the same,” you might say. On the other hand, when the memories and the present flavor profile meld seamlessly, rapture can ensue!

The perception of flavor is complex and multisensory. New studies are beginning to demonstrate how this emerging science can be utilized in the health and wellness sector. For now, the information helps chefs as they experiment with ingredients that impact how the brain will perceive the food they are creating. We are finally coming to our senses when it comes to flavor.

Nancy Cocola is the editor of mise en place magazine.

« 5 Knife Skills Every Chef Must Have! » Beer’s Flavor Explosion!