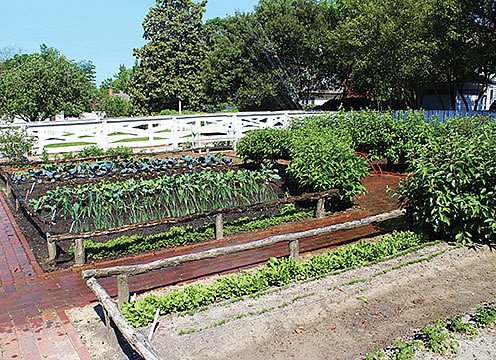 It means everything to Colonial Williamsburg Executive Chef Rhys Lewis ’77 that he can walk up to the original and still-thriving plum tree planted outside the home of George Wythe—leader of the patriot movement, delegate to the Continental Congress, and signer of the Declaration of Independence—and pluck fruit from the branches to make plum jam.

In truth, Rhys has to climb up a tall, rickety ladder and reach for the uppermost branches. But he happily risks life and limb (no pun intended) to be sure that the jam he is producing for visitors is filled with history and is the real deal.

That’s the philosophy woven throughout every Colonial Williamsburg experience in Virginia—it has to be the real deal. When the foodways staff interprets 18th century life by cooking authentic food using colonial tools in an historically accurate setting, it’s the real deal. When Rhys reimagined the site’s 18th century taverns, with working kitchen gardens planted by culinary apprentices, it’s to make them more authentic. From the heirloom varietals used in the 90 acres of gardens in Colonial Williamsburg’s Historic Area to a seed-saver program that ensures an authentic future—it’s all the real deal.

When Rhys was named executive chef for the entirety of Colonial Williamsburg, he knew how challenging and important it would be to transform 18th century ingredients for the 21st century palate. “There wasn’t a lot of variety back then because the average colonist lived absolutely seasonally,” Rhys explains. “They ate whatever was in abundance, which often meant eating the same thing over and over for weeks at a time.” Pickling and preserving, along with the winter garden (Virginia has a moderate climate), gave some variety to the meals. Today, with the help of the foodways department, Rhys and the Colonial Williamsburg culinary team incorporate 18th century recipes and terminology into the Williamsburg restaurant menus so guests can experience the flavors of the past created using modern techniques.

Chef Rhys has been inspired and influenced by the rich trove of information Colonial Williamsburg researchers have unearthed. The late Jim Gay, a foodways interpreter who researched what chocolate was like in the 1700s, discovered it had an Aztec-like profile with notes of cinnamon, orange zest, annatto seed, chili pepper, clove, and star anise. He and Colonial Williamsburg reached out to Mars Chocolate North America to further explore chocolate’s rich history in the Americas and to create a historic recipe. In partnership with Mars, UC Davis, and Fort Ticonderoga, Colonial Williamsburg formed the Colonial Chocolate Society. American Heritage Chocolate is the result of that collaboration. Made with all-natural ingredients, American Heritage Chocolate is an authentic historic recipe that shares the same characteristics as chocolate made in 18th century.

A program Rhys and his colleagues have introduced ensures that the history of Virginia’s food culture lives on. At Colonial Williamsburg’s Taste Studio, guests experience a garden tour and tasting on such topics as Lessons of Lavender, Banking on Swiss Chard, and Peas and Carrots—Friends Forever. It is here that the chefs make the connection between the native plants available to the colonists and their modern interpretation.

The rich immersion in history found at Colonial Williamsburg is thrilling for anyone who has had the opportunity to visit there. And Rhys’ passion for helping guests understand the connection between history and the food they are enjoying is, well, the real deal.

« CIA Alumni in the News, August 2015 » The Other Culinary Arts: Food Media Expert