The CIA athletics program has made the big-time! ESPN is featuring the CIA on a segment airing nationally. Fan correspondent Reese Waters and a production crew recently came to the New York campus to tape a humorous piece focusing on the Steels basketball team for the network’s flagship program, SportsCenter. The segment debuts on the West Coast late-night edition (11 p.m. PST, 2 a.m. EST) and will be repeated throughout the morning tomorrow and posted at ESPN.com.

Waters spoke with players, coaches, and fans about the quirky aspects of fielding athletic teams at the CIA–with long class days and students leaving for externship or graduating in the middle of a season–while dispelling myths about cooks and bakers not being athletic and “in shape.”

During the visit, one player working lunch service in the American Bounty restaurant had to run to the gym in his chef whites and change into his uniform to join his teammates who had already begun their warm-up drills for the game.

The Steels won their games against Pratt Institute and The Cooper Union while ESPN was on campus, and finished the season with a 7-8 record. 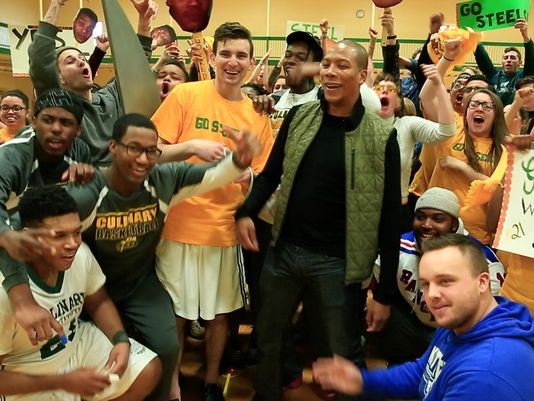