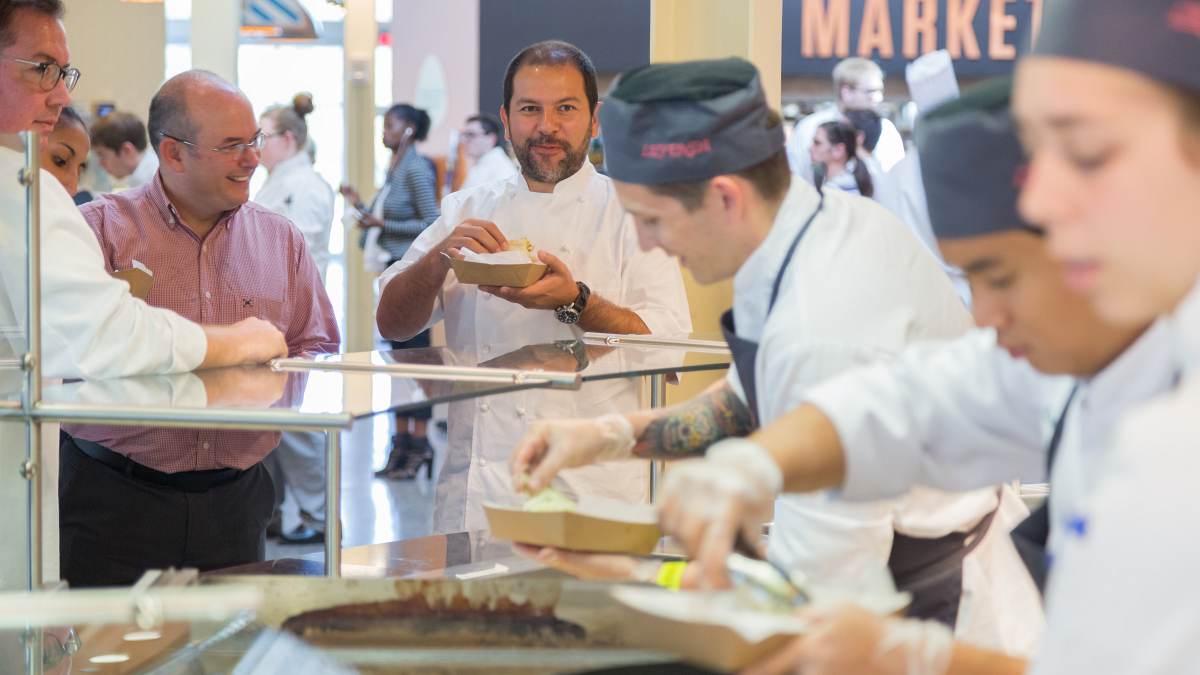 Enrique Olvera ’99 is an international renowned chef and owner of Grupo Enrique Olvera. His restaurants in Mexico include the award winning Pujol, Molino el Pujol, and five Eno gourmet coffee shops in Mexico City; Manta at The Cape Hotel in Cabo San Lucas; Criollo in Oaxaca City; Moxi in the Hotel Matilda in San Miguel de Allende, and, in New York City, Cosme and Alta. Cosme is named after a market in Mexico City where Olvera’s grandfather took him as a young boy. Teo – Taller Enrique Olvera is the research and development hub for Grupo Enrique Olvera, providing training and education, and consulting services.

Olvera was born in Mexico City. He moved to the United States to enroll at The Culinary Institute of America in Hyde Park, NY, graduating with an associate degree in 1997. He went on to earn his CIA bachelor’s degree in 1999. During his studies, Olvera earned various awards, including a gold medal from the New York Société Culinaire Philanthropique and the Jacob Rosenthal Leadership Award from the college.

After graduation, he got his first job at Everest, one of Chicago’s most exclusive restaurants. In 2000, armed with classical training and haute cuisine experience, Olvera returned to Mexico City to open his own restaurant, Pujol, a slurring of pozole, his nickname in school. There, he embarked on an exploration of Mexico’s culinary riches—reinterpreting and re-articulating its flavors, styles, and techniques from the perspective of contemporary cooking. Food critics in Mexico and around the world have celebrated his ideas and efforts. “Pujol is how I picture Mexico City, and how I want people to experience Mexico,” Olvera explains. “It’s not nostalgic, it’s a little bit loud, a little bit of a mess, and very Mexican.” He is respected by fellow chefs world wide for his creations. As Ferran Adrià says, “There was Mexican food before Enrique Olvera, and Mexican food after Enrique Olvera.”

Olvera has published four books: La Nueva Cocina Mexicana in 2000; Diez Años Pujol, a volume that recounts the history and philosophy behind his first ten years of the restaurant, released in 2010; and En la Milpa, released in 2011. His first English-language cookbook, entitled Mexico From the Inside Out with photography by Araceli Paz, which traces the life of Pujol, was published by Phaidon on October 19, 2015. His latest book, Tu Casa Mi Casa, was written in conjunction with Peter Meehan, Daniela Soto-Innes, Gonzalo Goût, and Luis Arellano and released in 2018. The recipes were inspired by Mexican home cooking.

In 2012, Olvera, along with the Colectivo Mexicano de Cocina A.C., launched Mesamérica, a three-day conference that aims to promote Mexican gastronomy outside of Mexico and bring the country into the global culinary conversations taking place today. “With Mesamérica, efforts, funds, and contacts could be combined under one roof and strengthen Mexico’s hospitality industry,” Olvera explains. Well-known foreign and domestic chefs, along with a slew of experts in the history, anthropology, and sociology of Mexican cuisine, have participated in previous editions of the conference. Mesamérica offers a number of students lower-cost admission to the conference thereby exposing them to some of the world’s top chefs and expand their understanding of all cuisines.

Olvera was featured in the second season of Chef’s Table, the critically acclaimed show created by filmmaker David Gelb (Jiro Dreams of Sushi) shown exclusively on Netflix. A frequent conference guest and lecturer, Olvera has appeared at the MAD symposium in Copenhagen, Denmark, and Gastronomika in San Sebastian, Spain, and has contributed to several Latin Flavors, American Kitchen conferences at The Culinary Institute of America, San Antonio. On April 20, 2016, at the 18th annual World of Flavor conference, Olvera was the opening keynote speaker, presenting The Voice of the Chef: Developing a Personal Philosophy Through Heritage and Training.

Chef Enrique Olvera majored in culinary arts management at The Culinary Institute of America in Hyde Park, NY. He is the executive chef and owner of Grupo Enrique Olvera in Mexico City, Mexico.