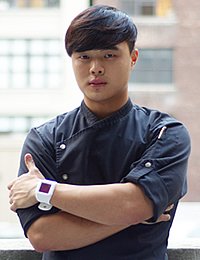 Deuki Hong is executive chef and owner of Sunday Bird in San Francisco, CA. Growing up in New Jersey, he developed an interest in cooking during middle school and, at the age of 15, Chef Aarón Sanchez invited him to work in the kitchen at Centrico in New York City. Sanchez told the budding chef, “You have to go to culinary school.” So, Deuki searched for the best culinary college in the world and found The Culinary Institute of America.

“I wanted to go to the number one school, and the more I learned about the college, the more I knew it was for me,” Deuki says. “I got to dive into cooking 24/7. It’s like a chef’s playground. I was surrounded by the best of the best and I just absorbed everything.”

“There is a lot of wisdom in teaching the basics and fundamentals and no other school does it better than the CIA. The school offers so much but it’s what you take from it that makes all the difference,” he says. “Spend time in the library and take advantage of all the school has to offer. There is a treasure chest of knowledge at your fingertips. And being part of CIA’s alumni network is like being in a fraternity, a fellowship. There’s an instant connection. One of the greatest assets the CIA has is the network of alumni in top kitchens all over the world. Cooking is global and can take you anywhere you want to go.”

In 2017, Deuki partnered with H Mart supermarkets. H Mart, which in Korean stands for han ah reum—“one arm full of groceries,” began in 1982 as a single corner store in Queens, NY. The company has since grown to 75 stores worldwide. Deuki was thrilled when he received the call from H Mart president Stacy Kwon. “I grew up going to H Mart on weekends,” Deuki says. “I’m so happy to be partnering with a brand whose values truly align with my own.” His official title is chief vendor curator, working with Kwon to revitalize the store’s food court. The new Market Eatery will feature Deuki’s Sunday Bird and Sunday BBQ, along with several new concepts.

In January 2018, the Asian Art Museum in San Francisco tasked Deuki and partners Andrew Chau and Bin Chen to revamp the museum’s café and to implement a menu that speaks to the breadth of Asian cuisine. The café, named Sunday at the Museum, is part of the museum’s ongoing $90 million renovation project.

“I was fortunate to meet the right people who put me on the path to where I am now. My education from the CIA gave me all the tools I need for success,” Deuki says. “For me, it’s all about the people and customers, and the hospitality you bring to the table.”

Chef Deuki Hong majored in culinary arts at The Culinary Institute of America in Hyde Park, NY. He is the executive chef and owner of Sunday Bird and Sunday BBQ in San Francisco, CA.