Craft Brewery Coming to the CIA! Big business…unabated growth…shift in consumer tastes…exploded…such has been the story for craft brewing in recent years. And now, students at The Culinary Institute of America can get in on the excitement with The Brooklyn Brewery at the CIA, coming soon to the Hyde Park, NY campus.

“This partnership is forward thinking both in culinary education and college dining,” says Waldy Malouf, senior director of special projects for the CIA. “In addition to being a craft brewery for students and campus visitors, it will serve as a research and development classroom to create and test new beer flavors.”

The brewery will be a key part of the college’s Brewhouse: Brewing Science and Technology course. In this bachelor’s degree program elective, students will be introduced to the process of brewing in a real-life micro-brewing environment. Among the many topics they’ll explore: 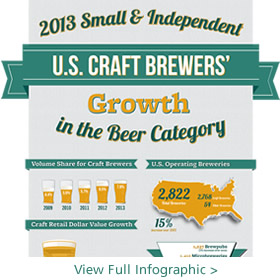 CIA students will have plenty of career opportunities in store with their newfound knowledge and skill set. Craft beer is all the rage, with 2013 data showing an 18 percent rise in volume sales and a 20 percent increase in retail dollar value—making this segment the primary growth driver in the beer industry according to the Brewers Association (BA), a leading industry trade group.

The Brewers Association also reports that craft brewers currently provide an estimated 110,273 jobs in the U.S., an increase of almost 2,000 from the previous year. Plus, there were approximately 413 brewery openings in 2013 alone, versus just 44 closings.

“Openings of brewing facilities continue to far outpace closings, demonstrating that the demand for high-quality, local, fuller-flavored beers is only increasing,” says Bart Watson, BA staff economist. “With this stellar year, craft has now averaged 10.9 percent growth over the last decade. Beer drinkers are excited about what small and independent brewers are offering.”

More Plans Brewing at the CIA

Beer aficionados will soon have plenty to be excited about on the CIA campus as well. The college will initially offer its own lager and ale, along with seasonal brews, on tap at the brewery and at its four public restaurants.

The brewery will also host continuing education courses for entrepreneurs hoping to develop micro-breweries, professional brewers who want to hold small workshops together, and beer enthusiasts who might just want a day or two of intensive learning in a real brewery environment.

“We have great respect for The Culinary Institute of America, its leaders, and its illustrious alumni,” says Brooklyn Brewery Co-Founder and Chairman Steve Hindy. “We are pleased to be able to make this gift to the CIA campus, and look forward to helping further develop beer education at Hyde Park.”


[yuzo_related]
« Sustainability at the CIA » “Chef” the Movie