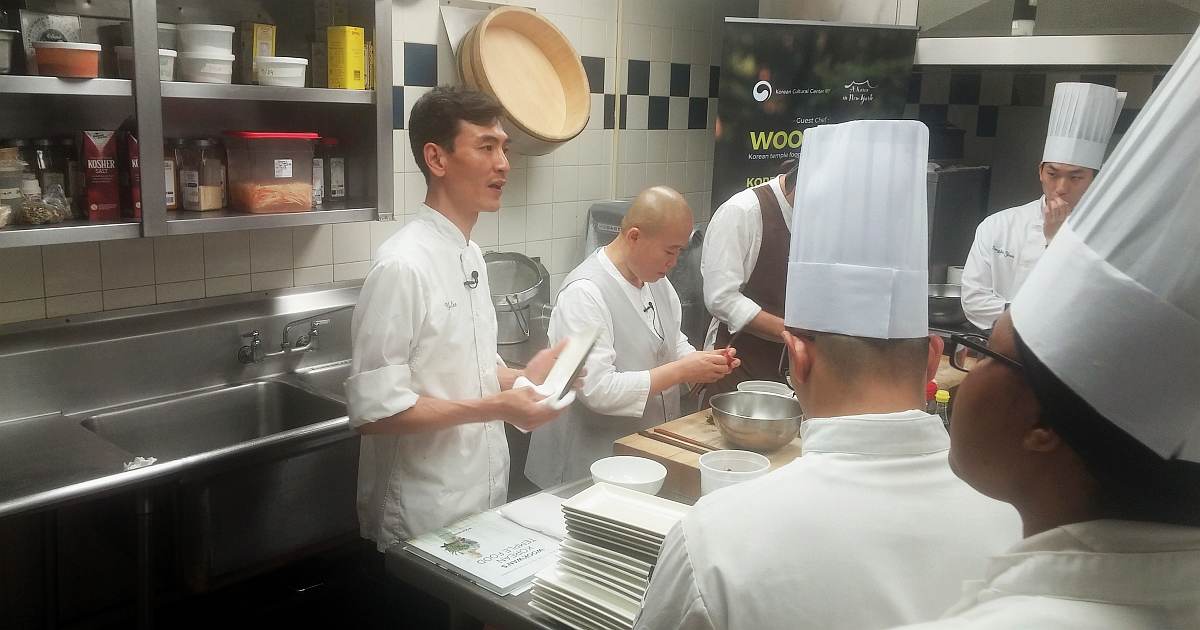 While many CIA students seek to make cooking their life’s work, they recently learned that preparing good food well can be a path to mindfulness and spirituality as well as a career.

Buddhist nun and chef Wookwan was a guest in the CIA’s sophomore-level Cuisines & Cultures of Asia course. The Korean native is an expert in “temple cuisine,” characterized by the principles of Buddhism that guide the preparation of the food, including using no animal products. Wookwan conducted two hands-on cooking sessions in Professor Michael Pardus’s kitchen for his students and many others on the New York campus.

“Our students are getting a different world perspective and philosophy about cooking that they might not have yet,” Chef Pardus said. “Korean temple cuisine teaches that cooking is a meditative art. Hopefully, the students will see cooking as a way to relax and to be present.”

Students took away from the day both new cooking techniques as well as an expanded cultural and spiritual awareness.

“I was impressed with how delicately Chef Wookwan handled each product,” said Jacob Kitten, a sophomore from South Carolina and student in the Cuisines & Cultures of Asia class.

Culinary Science major Majestic Bryant participated because she’s a vegan herself. “I learned that each step of cooking is meditation,” the junior from New Jersey said. “If you’re making a dish, you have to put all of your energy into it to make it be what you want it to be. The chef told us, ‘Make happy food.”

Published earlier this year, Wookwan’s Korean Temple Food: The Road to the Taste of Enlightenment, is the first English-language cookbook of temple cuisine. Her visit to the CIA was organized by Chef Pardus and the Korean Cultural Center New York.

The opportunity to bring something special to his class made a lot of sense to Pardus on several levels: “It’s a pedagogical fit—as we teach the cuisine of Korea—and it’s a cultural experience that my students wouldn’t typically have,” he said, adding that after a long career in the kitchen, he learned something too. “I’m 60 years old and I’m just beginning to realize that cooking is my meditation.”