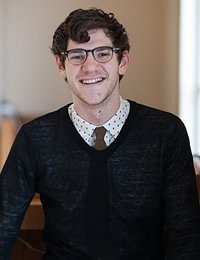 How did you become interested in your major?
I first became seriously interested in CIA’s Applied Food Studies major near the end of my associate degree at the CIA, when the program was first started. At that time I was working as editor-in-chief of the campus newspaper La Papillote, and I remember how big of a deal it was to be a part of the program’s initial reveal. I had known since beginning school that I wanted to pursue food writing as a primary aspect of my career, but at that point the Applied Food Studies program had not been started yet. I felt that my culinary arts associate degree provided me with the culinary technique and knowledge that I needed, but what I still needed to round out my education was everything that I then gained in my bachelor’s in Applied Food Studies degree.

Who most influenced your decision to pursue this career?
At home during my younger years, my whole family treated food as something so unifying. Food remained the epicenter of any of my family’s gatherings. Food was home, food was joy, and food was love. This practice was something that had become instilled in me throughout my childhood, only to crescendo into the culinarian that I’ve become. Some of my biggest influences in deciding to pursue my career path would include my family (notably my Armenian-Italian grandmother), a vocational culinary instructor of mine who was a CIA graduate herself, and a selection of the food media that came into its peak within the past decade.

Why did you choose the CIA?
During my last two years of high school I was enrolled at a vocational school in their culinary arts program. The program was being taught by Chef Karen Mecum, a CIA alum who had urged her most serious students to consider attending The Culinary Institute of America to fully develop their culinary skill sets. After visiting the college for the first time, I immediately knew that this would be where I would receive the next step of my culinary education.

What do you like best about the CIA?
There have been a number of things about the college that I really enjoyed during my three years as a student. Without a doubt, the CIA teachers themselves were to me the most impressive part of the Culinary Arts and Applied Food Studies programs. Having access to the teachers’ knowledge and resources has been key to my development as a CIA student.

What is/are the best lesson(s) you’ve learned while at the CIA or what advice would you give to new students?
Some things that I have learned along the way as a CIA student would be:

Do you belong to any clubs or participate in any activities/sports on campus?
By my second day at school, I had already written my first article and submitted it to the school’s campus newspaper. From that moment I was hooked. I worked with La Papillote for the next two years, eventually taking over as editor-in-chief. My time with La Papillote was filled with incredible opportunities. Representing the paper, I was able to attend StarChef’s 9th Annual International Chefs Congress in Greenpoint, Brooklyn. There I watched Chef George Mendez, owner of the Michelin-starred restaurant Aldea, give a demo on some of his favorite dishes. Other chefs whom I was able to speak to during this event included Elizabeth Falkner, Marcus Samuelsson, and Johnny Iuzzini ’94. Through La Papillote, I was also able to grow as a writer and leader. With large changes happening on campus, I was able to cover historical CIA moments such as Pangea’s opening, the transformation of the Rec. Center, the unveiling of The Egg, and several other pressing campus topics. Other groups that I have been associated with during my time at CIA include Slow Foods, Apple Pie Bakery Café, and countless Applied Food Studies programs.

What are your career goals or plans right after graduation?
After graduating this April I will be going to Europe for a month. The first two weeks will be with the CIA in France for the Cuisines and Cultures trip. Then, I will be in Italy visiting the Slow Foods University of Gastronomic Sciences, where I am applying to their Masters in Gastronomy: Food in the World program for next year. My career goals would be to work in multiple aspects of the food studies industry, including food writing and media, cookbook development, culinary anthropology, and food advocacy work.

What advice would you give to someone who is considering attending the CIA?
First, I would recommend doing all of your research on the CIA, and other similar programs. Visit as many schools that you can. After visiting a number of culinary schools myself (the CIA was my last visit), I was able to make a fully informed decision about my own education. All students should make sure to do ample research before making such decisions. With that said, how could pursuing an education at the nation’s premier culinary institute not be the best decision? For me, the answer was clear.