CIA Students Cook Their Way to the Super Bowl 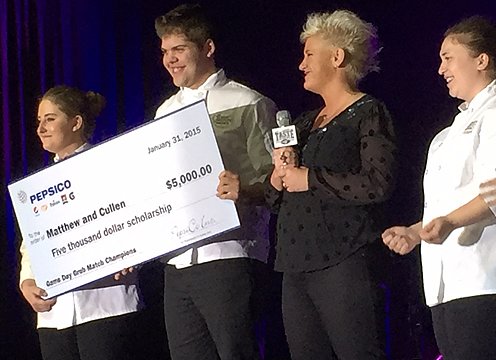 Four CIA students headed to Phoenix for Super Bowl weekend after being named finalists at a cook-off at the Hyde Park campus sponsored by PepsiCo, and two of the students actually got tickets to the game. Four two-student teams competed in January in front of celebrity judges in “Game Day Grub Match”—billed as the ultimate tailgate cook-off. Once in Phoenix, the CIA students served their dishes at several VIP events, where a winning team was chosen. Those two students, CIA Hyde Park sophomores Matthew Johnson and Cullen Folks, earned tickets to the big game, along with a $5,000 scholarship.

The other finalists were Olivia DeSalvo and Marie Taccino from the Greystone campus, who received a $3,000 scholarship in addition to the trip to Arizona. The runners-up—Mason Aronson, Adam Shoemaker, Ryan Hartwell, and Mathew Kilgus—each earned a $1,000 scholarship and a football signed by the celebrity judges.

PepsiCo worked exclusively with the CIA to design and launch this brand-new competition, which was open to students at the three U.S. campuses. Video “webisodes” follow the competition from start to finish. The finalists were announced at a student tailgate party on campus during a playoff game, where attendees noshed on the competitors’ dishes and met the celebrity judges.