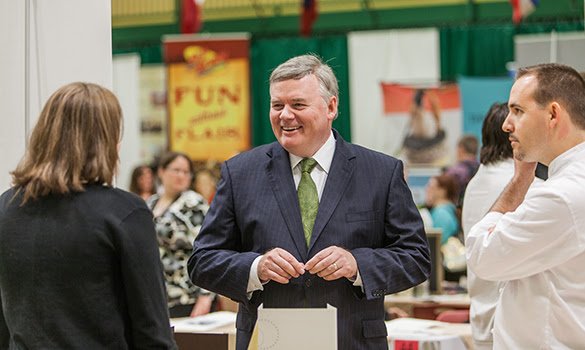 CIA President Tim Ryan is one of the most powerful people in the food world, according to both the Daily Meal and Nation’s Restaurant News.

The Daily Meal profiles Dr. Ryan on its list of “America’s 50 Most Powerful People in Food,” detailing how the college has thrived under his direction. It cites the recent opening of campuses in Texas and Singapore, the creation of new degree programs, and the development of a brewery. “A roster of CIA graduates or former students reads like a history of contemporary American (and occasionally non-American) cuisine,” the editors write. “[The CIA] remains the gold standard for serious instruction in the culinary arts, and Ryan just keeps pushing it forward.”

The feature about Dr. Ryan in the Nation’s Restaurant News “NRN 50 Power List” special issue says, “Tim Ryan has not only been transforming how the next generation of chefs is educated, but also influencing nearly every aspect of the restaurant industry…Ryan is responsible for driving the sustained excellence, innovation and growth the CIA has become known for.” The NRN editors also note that Dr. Ryan’s “thought leadership has positioned the CIA as a leader on important industry issues, such as health and wellness, world flavors, food ethics and sustainability.”

Commenting on the honors, Dr. Ryan said, “I am blessed to lead a world-class organization with a rich tradition of excellence and an outstanding team. Together we will continue to push the boundaries of education for food professionals, and in doing so—make a difference in the lives of our students, the industry we serve, and the greater dining public.”

Dr. Ryan is a 1977 CIA graduate. A Culinary Olympics champion and Certified Master Chef, he also holds an advanced Ivy League degree, earning his doctorate in education from the University of Pennsylvania. Dr. Ryan returned to the CIA as a faculty member in 1982 and became the college’s fifth president in 2001.