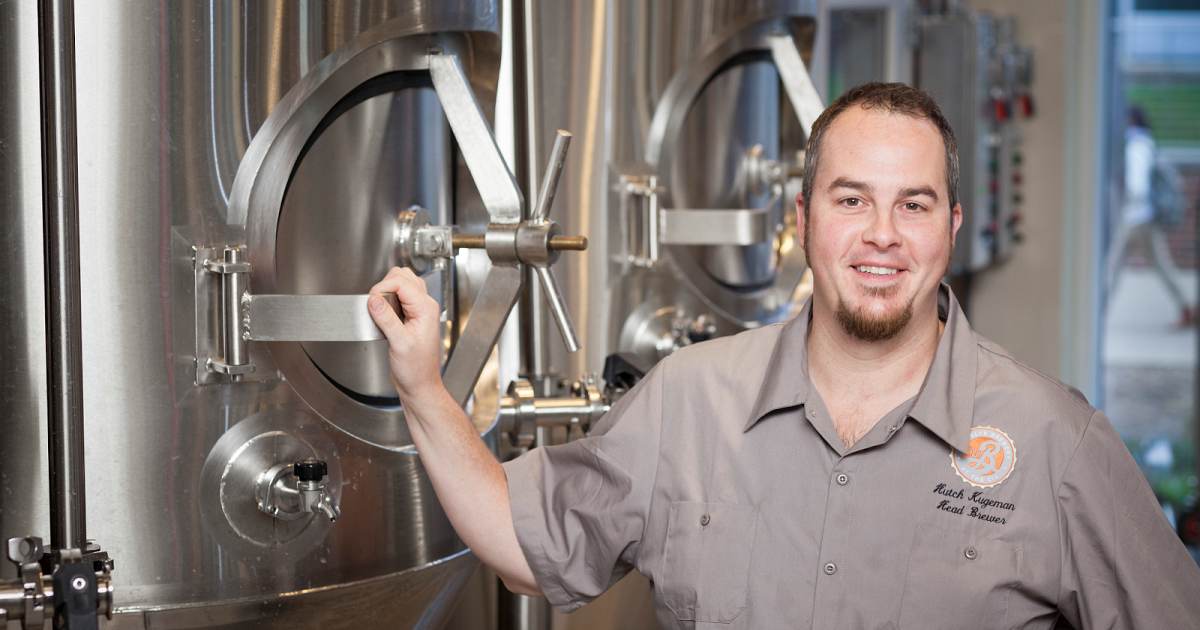 Hutch Kugeman is the head brewer for the Brewery at the CIA.

JH: What brought you into brewing?

HK: I started out as a home brewer, just a hobby really. My older brother taught me how and I have kept up with it since. I was a middle school teacher for some years and kept going with the home brewing, it definitely helped me relax after work. I moved to Portland, Oregon, where I eventually realized that I really wanted to pursue a career in professional brewing, so I started looking for a position. I lived there for a few years and, in that time, applied for a brewing position at the Pelican Pub. I didn’t have the experience they wanted, so I didn’t get the job. I kept in contact with the owner and head brewer and eventually got a call about working as an apprentice brewer. I spent about a year working at the Pelican Pub before coming to New York, where I have been for nearly 15 years.

JH: What led you to the CIA?

HK: I was brewing in smaller locations for the last 14 years. I spent 5 years brewing at Crossroads Brewing Company in Athens, NY. I love to teach; I was a teacher for so many years and I saw the opportunity to combine my love for brewing with my love for teaching. I saw the position here at the Culinary was open and knew it was something I wanted to do, so I applied and here I am. I have been here for 8 months now as the head brewer. I really enjoy the small scale brewing I get to do here and the interaction with the customers. I really missed the connection with the customers and all the amazing people you can meet.

JH: Why do you think microbrews have become so popular?

HK: I think it’s been building for a while. There are so many reasons why: people love supporting local business, they are starting to appreciate the unique flavors, and they are starting to demand artisanal products. I mean, in the last 5 years we have seen 15% to 18% industry growth. People are willing to spend more for better beer with better flavor. We are seeing 1.8 new breweries open every day in the U.S. We have more breweries now than ever, even more than pre-prohibition times. People want to be more in touch with the products they purchase and consume.

JH: Do you feel that this industry is going to keep growing?

HK: Yes. You do have to be cautious of economic downturns. A lot of breweries worry about quality and sometimes that comes with cost. Many lack the training or equipment to brew mass volumes of beer, which lowers their incoming profits. This makes small brewers more susceptible to economic issues. There is a huge push for the education of brewers. There aren’t many people qualified, on the spot, for brewing. If the number of educated people increases, then the industry will grow. Another sign of positive growth is the number of small breweries being bought by the big beer companies.

JH: What do you enjoy the most about working at the CIA?

HK: The student knowledge of craft beer is awesome. There is a lot of energy and creativity when it comes to beer and brewing; a lot of intelligent and inspired people are here asking questions I never thought to ask. There’s also a large mix of students interested in the program, which is really cool to see. A lot of conversations on the whole process, business to creativity, some of the flavor ideas are amazing.

HK: There is a possibility of dinners in the fall featuring beer and food pairings.

JH: What are your goals for this program or the outcome?

HK: I would love to see our students obtain a better command of how we achieve flavor in our beers. I want them to see what ingredients we use, understand the entire process, and know beer’s uses in the industry. If they understand the possible pairings, beer can have a broader range of flavors than wine, allowing it to be matched with more food.

HK: I think every restaurant that doesn’t have a good beer list looks like it is doing something wrong. Anything that doesn’t have a good beer list is behind the times. Beer is more accessible than wine. I don’t want beer to replace wine, I want it to compliment it. I think because beer is more inclusive financially, generally, people are less intimidated by beer. High end restaurants having beer includes more people in the overall conversation. The beer at the moveable feast in early June made people feel included. The restaurants had both wine and beer which allowed everyone to enjoy themselves and focus on the food.

JH: What do you think of molecular tempering with beer?

HK: It’s great. There isn’t a lot of molecular gastronomy with beer, but there are people trying to figure it out. It’s hard to tamper with the beer using the standard processes. There is a rise of creativity and innovation in the brewing process and ingredients. I think beer has the potential for some really cool molecular gastronomy. Food science and beer pose some really good challenges. I think there is a great future for scientific innovation with beer.
by Joseph Haffly, Associate Degree in Culinary Arts, excerpted from La Papillote
« Brazilian Cuisine: Bold Flavors Shaped by People, Culture, and Climate » Latina Eats: Farewell to an Amazing Semester in San Antonio