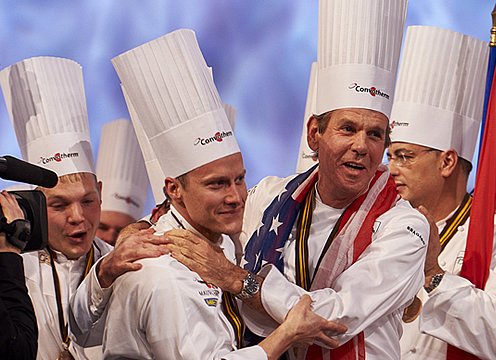 On January 28, the American team competing at the world-renowned Bocuse d’Or made culinary history when CIA graduate Philip Tessier ’99 ascended the medal stand. Tessier was chef for Team USA, which earned second place in the biennial competition in Lyon, France. Previously, the best finish for an American team in the 28-year history of the Bocuse d’Or was sixth place, back in 2009.

Before taking on the challenge of representing the U.S. at Bocuse d’Or, Tessier spent the last three years as executive sous chef at Chef Thomas Keller’s The French Laundry in Yountville, CA. Keller is also a CIA trustee and president of ment’or, a non-profit foundation that supports Team USA’s efforts and trains chefs for the Bocuse d’Or.

The two-day competition consisted of more than five-and-a-half hours of preparing a fish plate and a meat platter in front of thousands of cheering fans from all over the world. Teams are judged based on appearance, flavor, and technique of each dish. This year, each team’s fish presentation was required to feature brown trout, while the meat presentation focused on guinea hen.

In addition to Tessier being the chef for Team USA, two other alumni played key roles in the team’s success. Jérôme Bocuse ’92 is the vice president of ment’or and the son of legendary chef and competition creator Paul Bocuse. Grant Achatz ’94 served as a coach for Team USA and was Honorary President of the Jury for the 2015 competition.

Norway edged out the USA by nine points for the gold, with Sweden finishing in third place, 43 points behind the Americans.