1/5 of Michelin-Star Restaurants in the U.S. are Run by CIA Grads 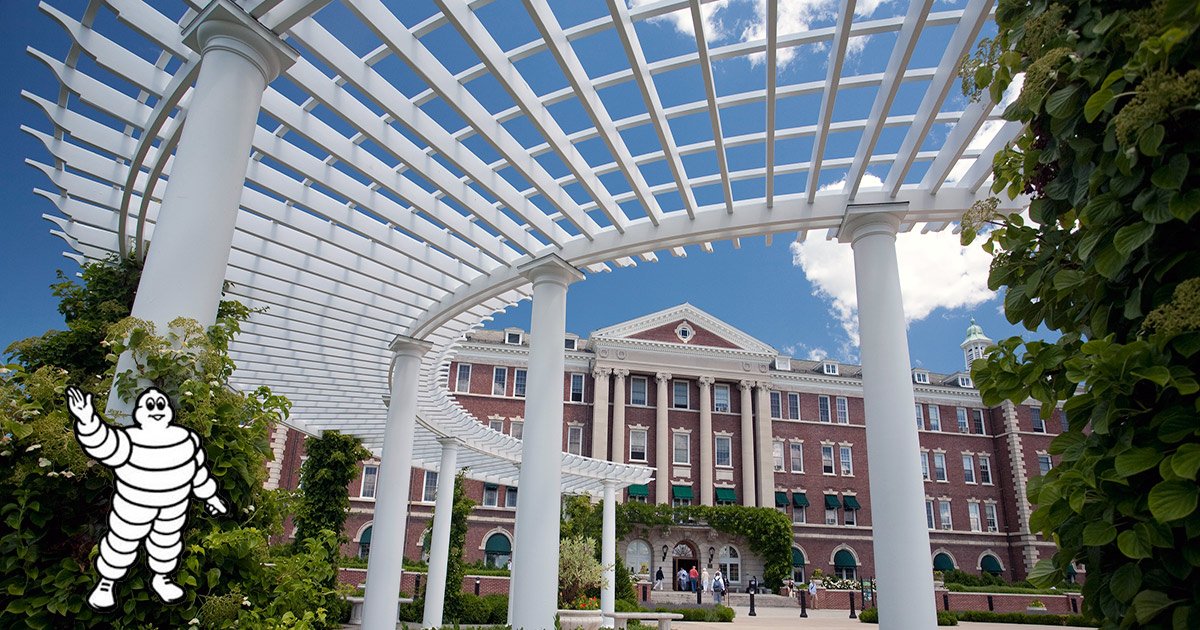 If you are dining at a restaurant in the United States that has earned a prestigious Michelin star, there is a good chance you will come across graduates of The Culinary Institute of America in key leadership positions.

The Michelin Guide, which has provided the defining rating of restaurant quality in Europe since 1900, now hands out stars to select restaurants in and around four U.S. cities—New York, San Francisco, Chicago, and Washington, DC. In those metro areas, Michelin reviewers have bestowed stars upon 169 restaurants. For 2019, more than one in five of those restaurants holding at least one star has a CIA graduate as the executive chef and/or owner.

Among the 37 starred restaurants with alumni at the helm are renowned three-star restaurants Alinea in Chicago, under the direction of chef/owner Grant Achatz; Le Bernardin in New York City, where Chris Muller serves as the culinary director; Quince in San Francisco, with chef/owner Michael Tusk; and Atelier Crenn in San Francisco, where Jonathan Black is executive chef. There are only 15 restaurants in the entire country that earned three stars.

Several CIA graduates run a pair of starred restaurants. They include Chef Achatz with Alinea and Roister, business partners and former CIA classmates Mario Carbone and Rich Torrisi with both Carbone and ZZ’s Clam Bar in New York, and Stuart Brioza with San Francisco’s State Bird Provisions and The Progress.

And, in numerous other restaurants earning Michelin stars where CIA alumni are not the executive chef or owner, the college’s graduates are found in the kitchens and dining rooms in other leadership roles. They are chefs de cuisine, sous chefs, pastry chefs, managers, service directors, sommeliers, wine directors, directors of operations, event coordinators, directors of culinary research & development, and even a culinary gardener (Aaron Keefer at three-star The French Laundry in Yountville, CA)!

With fewer than 200 restaurants in the United States being so honored, receiving a Michelin star is a huge accolade for chefs, restaurateurs, and their leadership teams, with the guides calling restaurants receiving one-star “a very good restaurant in its category.” Earning two stars means the restaurant features “excellent cooking, worth a detour.” The top honor of three stars is reserved for those once-in-a-lifetime dining experiences, where the restaurant has “exceptional cuisine, worth a special journey.”

Congratulations to four CIA graduates who have been welcomed into the rarified club of chefs and restaurant owners with stars in the Michelin Guides in the United States. Matthew Kirkley, Evan Rich, David Posey, and Eric Ziebold join 35 other CIA graduates holding stars in the guides for New York, San Francisco, Chicago, and Washington, DC.

In the 2018 guide for San Francisco, Coi was the only new addition among the seven restaurants earning three stars—the highest honor bestowed by Michelin—and Kirkley is the executive chef. Also in San Francisco, graduate Chef Rich is the owner of Rich Table, which earned its first star. Posey, executive chef/owner of Elske in Chicago, and Ziebold, chef/owner of Métier in Washington, achieved their first stars this year as well.

Many more CIA grads have multiple stars they’ve earned over the years. In addition to Kirkley, other three-star alumni include Michael Tusk, chef/owner of Quince in San Francisco; Grant Achatz, chef/owner of Alinea in Chicago; and Chris Muller, culinary director at Le Bernardin in New York City. Two-star graduates are Jung Sik Yim, chef/owner of Jungsik and Lauren DeSteno, corporate executive chef at Marea, both in New York; and Jonathan Black, executive chef of Atelier Crenn in San Francisco. Former CIA classmates and business partners Mario Carbone and Rich Torrisi have a pair of one-star restaurants with Carbone and ZZ’s Clam Bar in New York, as does Stuart Brioza with State Bird Provisions and The Progress in California.

Twenty-six other CIA alumni are chef/owners or executive chefs of one-star restaurants in the four U.S. cities that now have Michelin Guides.

In addition to the honors for graduates, CIA Trustee Thomas Keller has an impressive seven Michelin stars this year, earning three with The French Laundry and another with Bouchon in California, and three more with Per Se in New York.