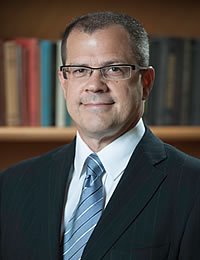 “I learned the basics of many important aspects needed to be a successful chef, restaurateur, or hotelier at the CIA. These included creativity, innovation, teamwork, cleanliness, organization, and celebrating success and a job well-done.”

How did you become interested in cooking?
My family has always been involved in cooking in one way or another. My grandfather came to the U.S. from Germany and was a chef for a large company in New York. My mother owned a diner in New Jersey and although my father was in the printing business, he helped mom with a catering business to provide for a big family of seven children.

My first job was at a Holiday Inn after school and on weekends as a dishwasher when I was 16. The chef appreciated the good job I was doing and invited me to help in the kitchen occasionally, and I eventually became a prep cook. I really enjoyed the fact that one could be creative; you could see the results of your hard work and passion in a very short time and you could see and hear satisfaction from guests when they enjoyed something you prepared.

Why did you choose the CIA?
I heard about the CIA from my older brother, who was also thinking about a career in the restaurant industry. After graduating high school, I worked at a couple of good, quality local restaurants in New Jersey and I discovered that there was a lot to learn about cooking and the restaurant business and if one wanted to make a successful career in this industry, they should get the proper training.

Following research and recommendations, it seemed like the CIA had the best programs for what I wanted to achieve and it had the best reputation with a very impressive lineup of instructors and graduates who became quite successful. I made my choice, applied, and got accepted!

What is your most cherished memory of the CIA?
I received a personal recommendation and reference letter from my Classical Cuisine instructor, Roland Henin. I was very proud to receive this from such a well-respected and talented chef. I was part of the class that opened the American Bounty restaurant with Tim Ryan, who was a chef-instructor at that time. Oh, and I nearly received “Perfect Attendance” but missed it by being late one time for reasons I cannot discuss here—but I am happy to say it was well worth it!

What’s it like to work in another country?
I really enjoy it! You of course need to have an open mind, be culturally sensitive, and do some homework about the culture you’ll have the pleasure to be exposed too, to learn from. From my perspective, it makes you a better person.

What made you decide to go to China?
I guess the first question should be, “Why did I decide to move to a different country?” As a chef, I truly believe that if you are going to prepare dishes from different countries or use them for inspiration, you can do so much better if you first know how that dish is done locally (in the country of that dish) and understand the ingredients and the preparation methods that the local people are using. I was working at the Hyatt Regency Maui as executive sous chef from 1984 to 1986, and as you may know, Hawaii has a lot of Asian influence in food, culture, and products. It was in Hawaii that I decided to make a move to Asia. I actively pursued opportunities—which was not easy at the time—but I finally got my first executive chef position at a casino hotel that was opening in Pusan, South Korea. That’s where I really began to understand the importance of travel, curiosity, experimentation, product knowledge, freshness, and keeping things simple, authentic, and product-focused.

I had the great honor of being part of the opening team of the Grand Hyatt Shanghai, where I was appointed the executive assistant manager, food & beverage—leading the team in opening the largest F&B operation Hyatt had in Asia Pacific at the time. China attracted me in many ways since I had the opportunity to travel there when working in other countries, I found the culture fascinating, the regional cuisines inspiring, and, most of all, the friendliness, work ethic, and teamwork of the local people second to none. I came to mainland China in 1999 and, with the exception of a move to Hong Kong for four years, have spent most of my career here and advanced to my present position of vice president and managing director—operations for Hyatt Hotels.

What do you like about China? Is there anything you don’t like about it?
There are so many things I love about China and for sure, the people are on top of the list. They have wonderful family values, enjoy great camaraderie and teamwork, and are hard-working and fun! The amazing variety of food products, regional cuisines, and cooking methods used throughout the country is mind-blowing. What I don’t care for? That would be the hangover from cheap baijiu!

How did a CIA education help prepare you for a role in food business and hospitality?
I learned the basics of many important aspects needed to be a successful chef, restaurateur, or hotelier at the CIA. These included creativity, innovation, teamwork, cleanliness, organization, and celebrating success and a job well-done. I also learned about passion, details, perfect preparation, and keeping it fresh and simple.

Why did you switch from a culinary role to a management role?
I have always had the goal of one day being a general manager of an international hotel, but I loved and respected the kitchen so much, I wanted to achieve my goal of executive chef first.

How is your chef experience helping you as a manager?
I am very glad that I took the route from kitchen to management. I feel the discipline, practicality, and organization skills learned in the kitchen are a big reason I’ve gotten where I am today. I also feel the I’m a more creative person, and I appreciate the importance of innovation and of being a “hands on” manager as a result of my time in the kitchen. But I’m proud to say that at heart, I’m still a cook.

What advice would you give to a prospective student, especially international, who is considering attending the CIA? Whatever you want to do in life, when it comes to your education and career, go with the best—and the CIA certainly falls in that category. I mentioned the importance of travel and exposure to different countries, cultures, and cuisine; the CIA provides this exposure in many ways, including having instructors from around the world.

What are the best lessons you’ve learned while at the CIA?
You get out of life what you put in. If you want to be successful, you need to work hard, you need to listen, you need to ask questions, and you need to find a mentor to guide and inspire you. In addition, you need to exercise! I think I gained 10 kilograms in my first six months!

Chef Christopher Koehler majored in culinary arts at The Culinary Institute of America in Hyde Park. He is the vice president and managing director—Operations, Hyatt Hotels & Resorts in Beijing City, China.

« Chef Jason Jonggun Kang ’10, My Degree Takes me Around the World » Chef Gerard Yip ’14, Never Give Up