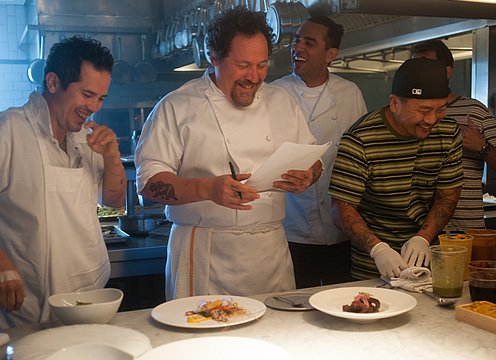 Inspiring Passion for our Craft

CIA graduate Roy Choi, who spent six weeks training actor/director Jon Favreau (known from his work on the Iron Man movies) for his demanding role. So it’s no wonder that the movie mirrors Roy’s life, starting with his attempts to “make it” in formal restaurants. Roy soon learned that his discontent stemmed from the fact that he had drifted away from his Korean roots and his passion. And so, the Kogi BBQ Taco Truck was born. He was also the first to harness the power of Twitter to revolutionize the way food is delivered to, and talked about, by his followers.

When Chef Carl Casper (Jon Favreau) suddenly quits his job at a prominent Los Angeles restaurant after refusing to compromise his creative integrity for its controlling owner (Dustin Hoffman), he is left to figure out what’s next. Finding himself in Miami, he teams up with his ex-wife (Sofia Vergara), his friend (John Leguizamo), and his son to launch a food truck. Taking to the road, Chef Carl goes back to his roots to reignite his passion for the kitchen—while using social media as a true partner in its success.

Check out the Chef trailer >

Your Future in Food

Inspired by the movie? Dream of developing your culinary talent, taking charge of a restaurant, or letting your creativity shine on the food truck circuit? A degree from the world’s premier culinary college can take you anywhere! Just ask CIA alumni like Roy Choi.

« Craft Brewery Coming to the CIA! » Fall in the Hudson Valley