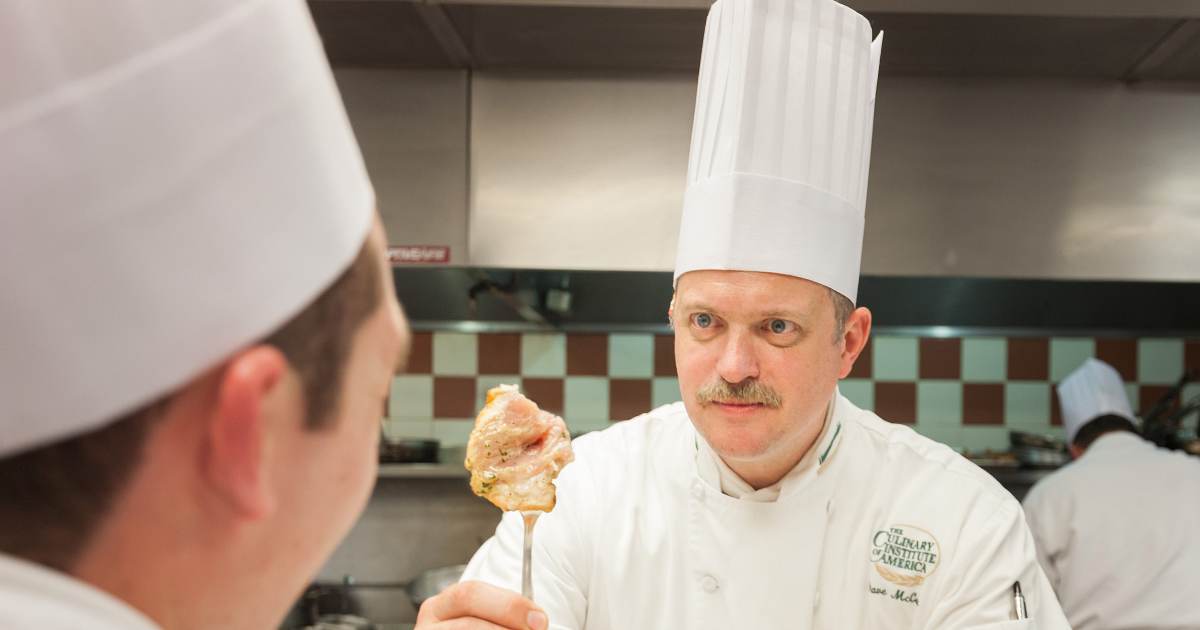 CIA instructor David McCue is known throughout the college as a master storyteller, and his blog posts—presented with flair and a sharp wit—are the stuff of legend. Here are seven of his most memorable teaching moments. 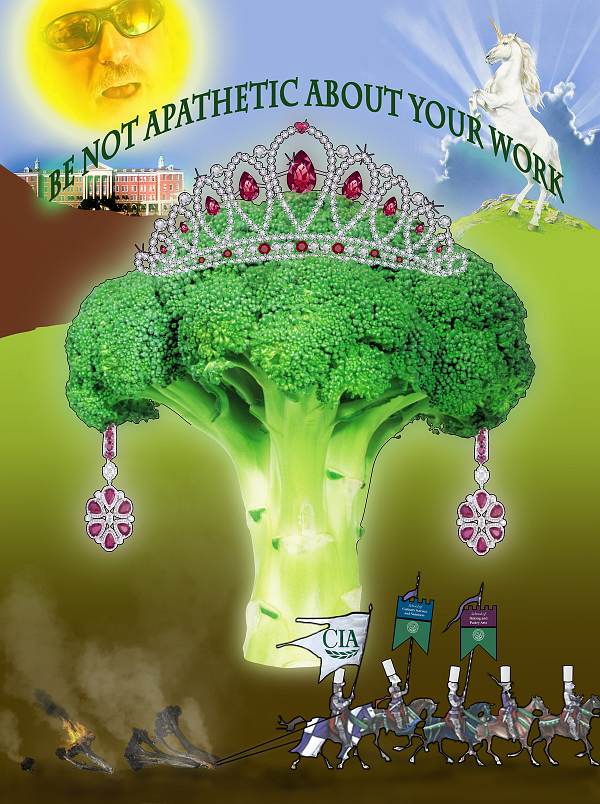 We had a beautiful roasted chicken entrée with simply buttered broccoli on the menu that day. One of my cooks began at his task, prepping broccoli, that’s all, broccoli, two cases, five hours from now, on the line, ready to go. His body language screamed he was not thrilled at the lackluster task of simple veg prep. “C’mon Princess,” I said to him, and “Princess” really did sum up his attitude toward the banality of the task.

Service quickly approached, and I looked around his station expecting to see some boiling water, maybe an ice bath. Nothing. “Are you telling me that you’ve been here for nearly five hours working on that broccoli and you never put the water on?” My voice was steadily on the rise. “Five hours and you chopped broccoli. That’s it!” He tried to recover and quickly boil the broccoli, but too late. And yet, still he presented it to me, saying, “All set, Chef. Ready for service.” That was it for me. “Ready? This is ready? Look at that poor broccoli, Princess! Ruined!” So I ushered him out of my kitchen as the rest of the crew scrambled to make up for his indifference.

Lesson: Don’t be apathetic about your work. 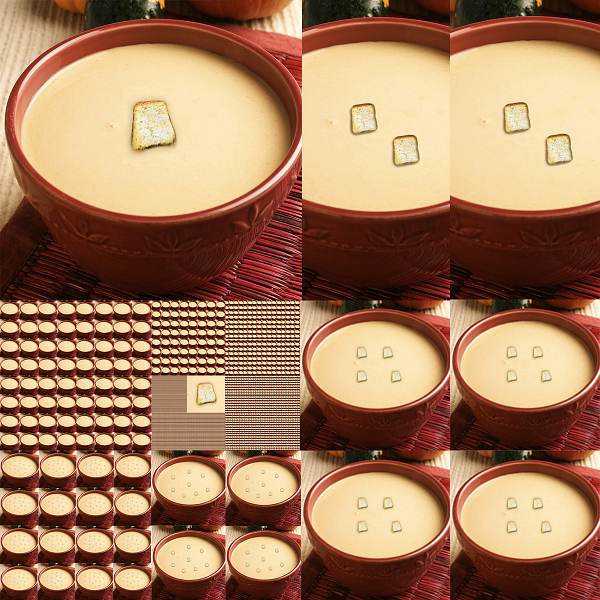 One of my cooks was busy preparing croutons for the upcoming service. Our Caesar salad was going to be topped with a nicely toasted golden brown crouton (crostini really) rubbed with a bit of garlic. As we closed in on service, the crisp, golden brown garnishes actually looked quite nice. But…we were getting ready for a service of 80 to 100 people, and each was to receive a salad, each salad a crouton. What I came to realize was that this individual was way off, only preparing a fraction of what was needed in the next few minutes.

In his “denialism,” he attempted to bypass the inevitable making of more croutons. CRUNCH, a crouton disintegrated as I came on the scene. “So, you’re going to make twice as many salad croutons by taking big croutons and cutting them in half now?” The disbelief was clear in my voice. Undeterred, he kept trying. CRUNCH, another crouton semi-exploded as the cook tried to bisect it. It took him several tries to realize it was just not working. “Sooooooooo…?” I led him. “Should I make more, Chef?” “I think that would be best.”

Lesson: The fastest way is the right way. 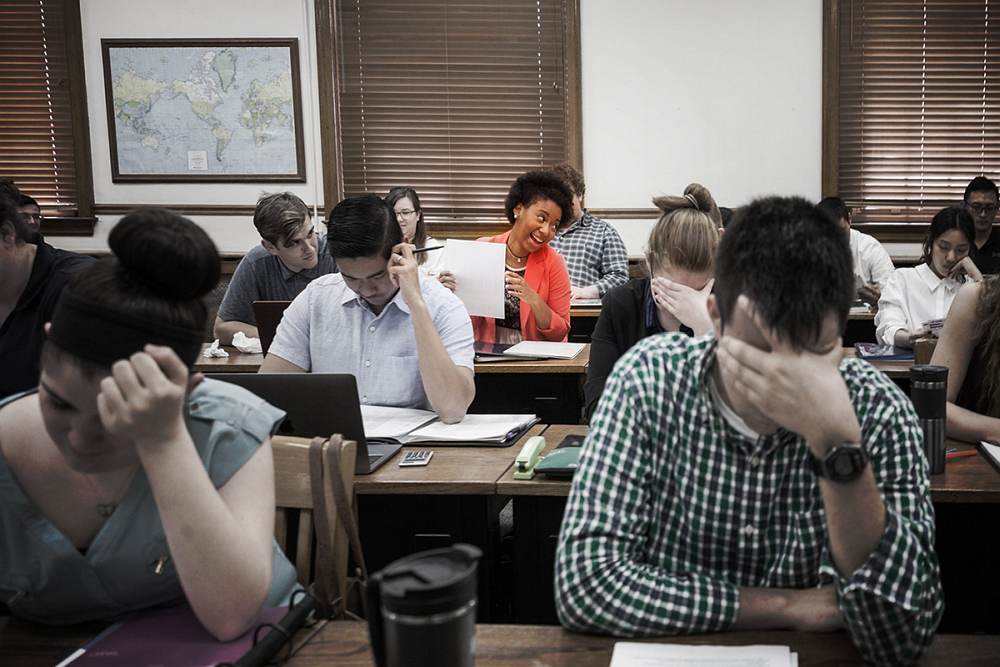 I often give tests. On one occasion, I decided to place within the 100-question test a sub-test on following directions. Question #42 simply stated, “For the sake of the environment, please submit your test completely blank and you will receive a perfect score.” I told everyone in advance to read the exam thoroughly before beginning, including writing your name. I was surprised at how many of those tests I had to grade. There was one young lady, though, who carefully read through the pages.

After about five minutes, she approached me and asked, “Chef, are you serious?” She pointed to the question. “Absolutely,” I replied. But to my surprise, she hung on to the test, went back to her seat, and started writing, determined to ace it anyway. What wasn’t surprising was that young lady ended up being a star as a student, and later as my MIT and in her career. And the test? About 35 minutes in, people started getting to #42 and the room filled with sighs, groans, and a couple of cusses too. I chuckled as I looked up and caught that one young lady’s eye as she wagged her head at me.

“Chef I think the fryer is on fire.” Not exactly what you like to hear minutes before a kitchen opens for service. It all started, as many such situations do, with a bit of unpreparedness followed by a bad decision. I asked “What makes you say that?” “There’s fire coming out of it!” “That would do it,” making my way over to his station with fire extinguisher in hand.

Turns out the cook decided to turn on his deep fat fryer without setting it up properly, filled it just enough so it could superheat and combust. In his moments of debilitating fear, he did what most do: shut down. Then there’s Chef, remaining calm in the face of it all because just maybe he’d been through something like this before. Whoosh! A well-placed dose of pressurized chemical tamed the situation. I looked over the wreckage. “What made you turn on a fryer that only had a few quarts of oil in it?” I asked. “Well Chef, I thought if I turned it on, it would be warm for when I added the rest of the oil.” To which I responded, “Don’t think son…you’re not good at it.” 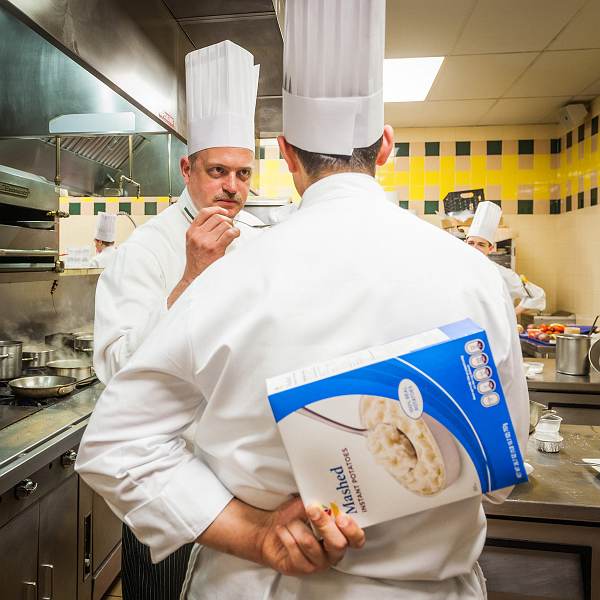 I had just finished showing my cook how to do the mashed potatoes for that evening’s service. I am a bit of a stickler for the details; the simpler something is, the more perfect it should be. So I finished the demo, reiterated the importance of the steps, and left the cook to do her work. When I returned to that cook awhile later, something was amiss. There she was, with a huge mixing bowl that was allowing my beautiful potatoes to cool down as she worked, pouring cream directly from the ice-cold container (neither being heated nor measured) right into the already cooling mass.

“What do you think you are doing?” I demanded. She wheeled around, quite astonished I was there. “We just went over this! And what are you doing? THE COMPLETE OPPOSITE! What were you thinking?” Softly she replied, “I’m sorry Chef…I didn’t see you coming.” That was it. No excuses, no plying for sympathy, just honest admittance. “Well then,” I stammered as I tossed the bowl of cold, gummy spuds into the compost. “Let’s do it again.” 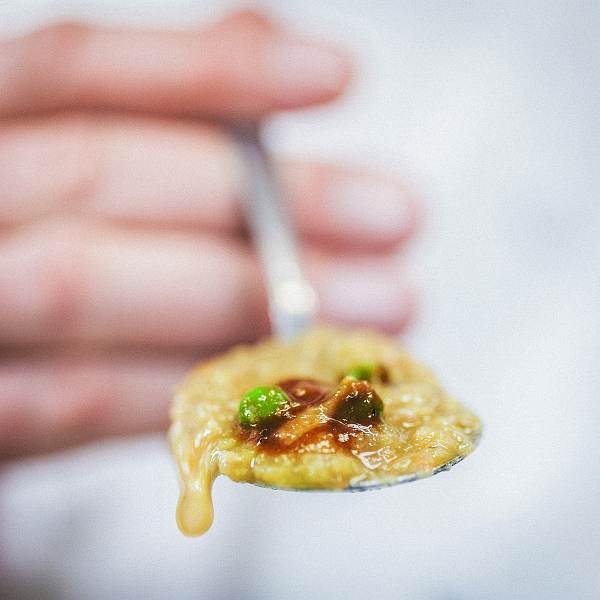 One day I had a cook making hollandaise sauce. He says to me, “Chef, can I get some clarified butter?” I said “Sure!”…not anticipating for a moment that there would be any issues with such a request. So he strolls over to our food supply and grabs a hunk of it. Without thinking too much about it, he throws it into the pot. About 20 to 30 minutes later, we all started noticing an odd odor wafting through the kitchen. It kind of smelled like nachos or something, which didn’t jive with anything being prepared that day.

I made my way to the young cook’s station, which is where the smell appeared to be emanating. Looking down into the pot, I saw some sort of brown frizzly thing on top, certainly not a result you’d get with clarified butter. Turns out that he grabbed cheddar cheese instead! That certainly explained the strong “nacho-ish” odor. I guess to him, since it looked like butter, it must be butter…but it sure as hell didn’t smell like it.

Lesson: If it’s not labeled, taste it.

Another day in the kitchen, another teaching moment. Roast beef was on the menu this day, and we had $400 worth of beef lined up, rubbed, and ready to be roasted. I told the cook to go ahead and pop them in the oven and set the timer, 10 minutes a pound plus five minutes. When you pull them out, they should be ready to go.

So the timer goes off, the kid pulls the beefs out, and they’re gray. These beautiful cuts of beef were just ruined. That’s when I realized he didn’t put them in the oven, but in the steamer! “What did you do?” I demanded. “They were supposed to go in the oven!!” “Chef, I thought I did,” he replied. I shot back: “How did you not notice the steam pouring out of it? You wear glasses! How did you not know?” Sheepishly, he explained, “I thought it was the heat of the oven.”

CIA instructor David McCue is known throughout the college as a master storyteller, and his blog posts—presented with flair and a sharp wit—are the stuff of legend. Here are seven of his most memorable teaching moments.